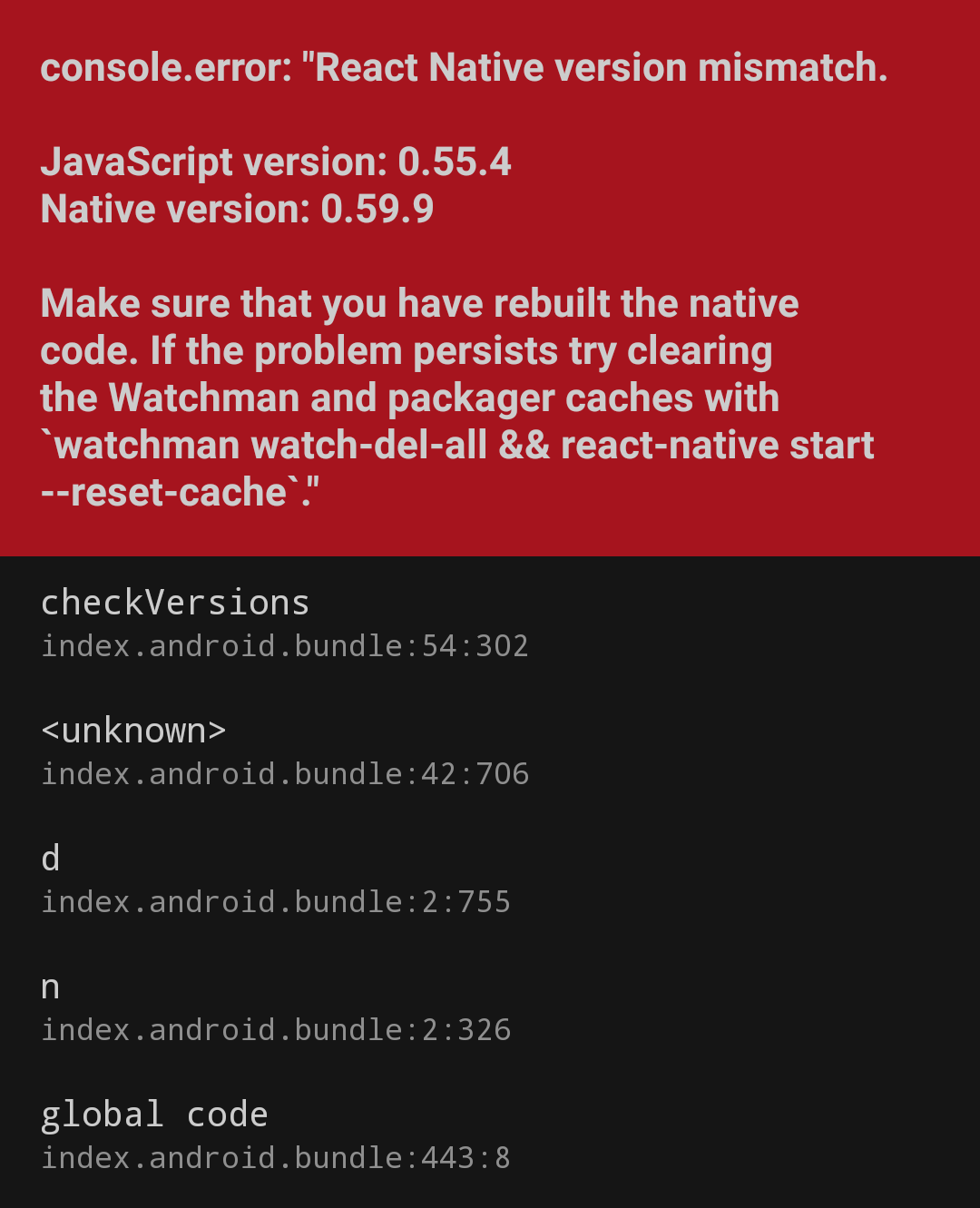 We can find out that RN has a version check at startup through this error, how is the specific mechanism, let’s follow the source code together.

As for why an old js file is packaged locally and why it’s only a problem today after so many years, that’s a topic for another day, so ignore it for now

Location of the error report

By searching for the keyword React Native version mismatch you can find the final code for the check in Libraries/Core/ReactNativeVersionCheck.js.

If the version number is 0.59.9, then major is 59 and minor is 9. It feels like RN didn’t intend to remove the first 0. Meanwhile, checkVersion is loaded at startup, this part of the code you can search for yourself to see, not to analyze

Well, it’s very clear and unambiguous. It’s like writing the same thing as not writing, no rush, we know anyway, the value is in the js file, will be with the final package into the bundle.js.

According to the reference, we find the file Libraries/Utilities/Platform.android.js with the following key content.

Continue to ReactAndroid/src/main/java/com/facebook/react/modules/systeminfo/ReactNativeVersion.java in the same directory.

It’s the same as the js side, both are 0, which we’ll discuss later. As you can see, Platform.constants.reactNativeVersion is defined on the java side, and eventually in the native code, the com.facebook.react:react-native:0.59.9 we referenced in the build.gradle file contains this code. contains this code.

By analyzing the startup source code, we found that the check is actually performed only in the development environment, while the production environment does not have this section

How to set the version number

If you look at the source code, you can see that the version number is 0. Then you can check the directory scripts/versiontemplates`, under which is the template for setting the version number, and the real operation is done in scripts/bump-oss-version.js#L60. This script takes a version number, fills in the previous template and overwrites the corresponding file in the project. This script is executed at release time, see step-2-cut-a-release-branch-and-push-to-github for details, and everything is clear up to that point.

So the version number is set up by script at release time, and is set up uniformly by way of templates to avoid manual changes and omissions

Template part is a simple replacement, did not refer to the additional template engine, can be simple to deal with will never get complicated, this is worth learning

A lot of scripts are written in js, so it is very easy to read and modify, we can also use js to deal with scripts, not to mention scripts on bash, python, in fact, js is also very popular

What happens when this error occurs

I encountered this case because the colleague used RN 0.55.4 to do manual packaging and uploaded the packaged js file to the repository, and then upgraded RN to 0.59.9.

From the previous source code analysis, if the wrong version of packager is started during development, it is also possible to generate this problem. We can understand that this mechanism is to ensure that the version of the js file downloaded from packager is the same for the currently running App, so that we can avoid continuing development on the wrong version, which will lead to the spread of the problem and not facilitate the troubleshooting of the final problem.

When we run into this problem, it is usually caused by the packager starting the wrong version. Secondly, unless you know what you are doing, it is strictly forbidden to generate js packages manually, and this part should be left to RN’s packaging scripts to execute and maintain, and cannot be submitted to the repository.

Why is there this check

I didn’t find the relevant instructions, but I can speculate. Personally, I think it is the RN development model that leads to the development stage, the computer will start a server, which is the packager mentioned above, used to distribute the latest js file, which is also the basis for the RN development stage can quickly update the code, because the distribution is independent, so this part is likely to happen version inconsistent problem, and version inconsistent is not affect most of the development, because the API is mostly compatible design, if you let this behavior, to the late development problems, troubleshooting will be very difficult. This is the basis for the rapid update of code in the development phase. And in the release phase, because all scripts are automatically executed, this part is relatively safe a lot.

Very often, some hard problems are caused by low-level errors, only the problems are hidden at the beginning and explode in the middle and late stages, when it is very time-consuming to troubleshoot them. Especially for open source projects like RN, it is a huge waste of resources if there are a lot of “hard problems” in issues that are caused by low-level errors. From this point of view, these basic tests are still necessary

Also in the process of tracing the source code, you can learn a lot, including the design of the library, the differentiation between the development environment and the production environment, the template design, etc. For open source project errors, many times we can understand the nature of the problem through the source code, which is a great help to our development and learning.