Last year Ian Lance Taylor and Robert Griesemer released a new draft of Go generics (The Next Step for Generics), and the response from Gopher at home and abroad was overwhelming, with everyone interpreting the draft and this article, and feeling that this version of Go generic design is basically close to Go’s generic goals, and in short, much better than the previous one.

Ian also provided an online compilation tool, go2go, to get a taste of Go generic programming.

What if you compile locally?

Actually Go source code is synced to github, so you just need to download the appropriate branch, compile it yourself, and get this go2go tool. This article guides you if you download, compile, and use this tool, and you can also learn how Go generic code is converted to Go1 code and then run.

Of course, as always, the current design and tools are designed for the draft version, and will change when the official version is released.

First download the Go code, the branch is dev.go2go

By following the steps above, you will be able to compile the latest Go tools that support Go generics. 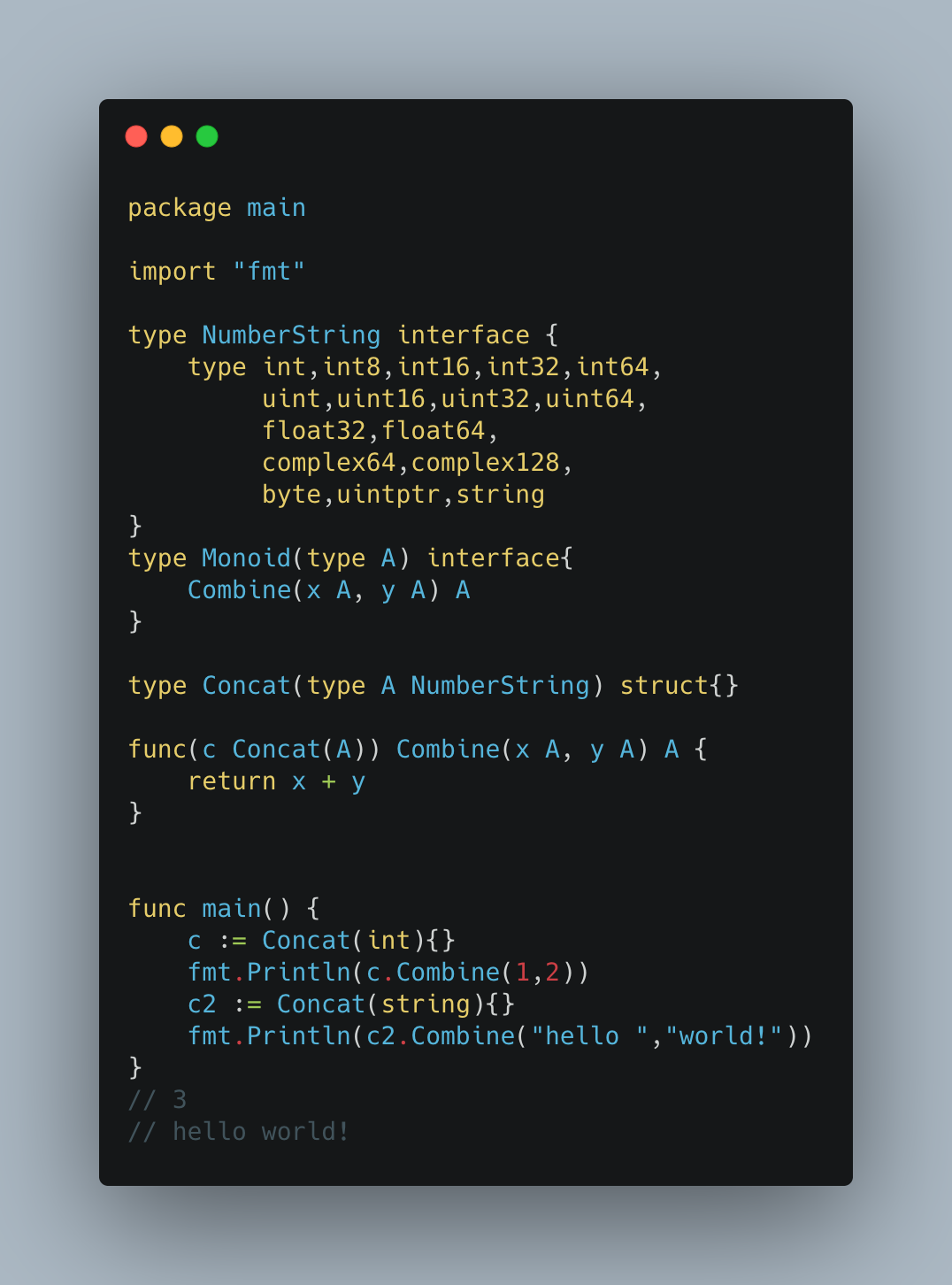 In this example, we define a NumberString interface, which is an extension of the interface, and you can have only numbers or strings implement this interface with the following declaration:

The main purpose is still to constrain the types in the generic. Because we want to use the + symbol in the body of functions that use generic arguments, only numbers and strings support this operator, so in order for the function to compile properly, you need to constrain the type arguments. The Go compiler finds objects that are NumberString objects when it compiles them, so they can be summed using the + operator.

In this case, the NumberString interface cannot be implemented by other types, for example, the following code will compile with an error:

Also note that the go2 code files are currently suffixed with .go2 to distinguish them from the Go1 code.

You can now compile and run the above code:

How is the Go2 code compiled?

go2go converts Go2 code to go1 code for running, which means that it provides generic support through compile-time conversions. So the generic design of Go is relatively simple, and Go2 also provides backward compatibility.

You can see what magic go2go does by converting Go2 code to Go1 code with the following command.

The converted Go1 code is as follows:

So in our example above, the types of c1 and c2 are different, and their types are instantiate୦୦Concat୦int and instantiate୦ ୦Concat୦string. Use instantiate as prefix and type as suffix int,with ୦୦ and ୦୦୦ as hyphen.

The real code logic of go2go is in go/go2go, which provides the logic for code parsing and conversion, and you can savor the implementation by Ian Lance Taylor and Robert Griesemer. I believe there will be an in-depth Gopher analysis article coming soon.

Mess up a bit

Since the go2go tool translates Go2 code into Go1 code and specializes the generic types, what happens if we declare a type with the same name as the specialized type? For example, the following code:

We declare the instantiate୦୦Concat୦int type in the code and then compile and run it:

The result is that the compilation fails because the go2go conversion program also generates a renamed instantiate୦୦Concat୦int type.

Of course go2go is still a conceptual tool and will certainly do optimization and type case handling in the future, the related technology is called Name mangling, which is something the compiler will do.