Nowadays, users’ requirements for front-end pages are no longer satisfied with achieving functionality, but also with value and fun. In addition to the overall UI aesthetics, adding the right animation effect in the right place is often more expressive and natural than static pages. For example, a simple loading animation or page switching effect can not only relieve the user’s waiting emotion, but even silently achieve the effect of brand promotion by using the brand logo and other forms.

React, a popular front-end development framework in recent years, proposes the concept of virtual DOM, in which all DOM changes occur on the virtual DOM first, and then analyze the actual changes of the web page through DOM diff and reflect them on the real DOM, thus greatly improving the web page performance. However, in terms of animation implementation, React as a framework does not directly provide animation effects to the components, and developers need to implement them themselves, while most traditional web animations are implemented by directly manipulating the actual DOM elements, which is obviously not advocated in React. So, how are animations implemented in React?

The essence of all animations is to continuously modify one or more properties of a DOM element to produce a coherent change, thus creating an animation. Animations in React are essentially the same as traditional web animations, but in two ways: through css3 animations and through js modifications to element properties. However, the implementation is more in line with the framework of React, and can be summarized in several categories

1. Timer or RAF based interval animation

In the beginning, animations were implemented by relying on timers setInterval, setTimeout or requestAnimationFrame (RAF) to directly modify the properties of DOM elements. Developers unfamiliar with React features may habitually get the real DOM node via ref or findDOMNode() and modify its style directly. However, fetching and manipulating the real DOM directly via ref is not recommended and should be avoided at all costs.

Therefore, we need to link methods such as timers or RAFs to DOM node properties via state. First, we need to extract the properties related to the changing style, replace them with state, and then add a timer or requestAnimationFrame to the appropriate lifecycle function to keep modifying state and trigger the component update to achieve the animation effect.

Take a progress bar as an example, the code is shown below.

In the example, we build the linear transition function animation in the increase and decrease functions, and requestAnimationFrame executes the transition function before each browser redraw, calculating the current progress bar width property and updating that state to make the progress bar re rendered again. The effect of this example is shown below.

This implementation has good performance when using requestAnimationFrame, is fully implemented in pure js, does not depend on css, and may cause frame drops and lag when using the timer. In addition, it requires the developer to calculate the state based on the speed function itself, which is more complicated.

2. Simple animation based on css3

When animation and transition in css3 became available and widespread, we could easily use css to implement changes in element styles without having to calculate real-time styles artificially.

We still take the above progress bar as an example and use css3 to implement the dynamic effect of the progress bar, the code is shown below.

In the example, the increase and decrease functions no longer calculate width, but directly set the width after the increase or decrease. Note that the transition property is set in the css style to automatically achieve a dynamic change in the style when the width property changes, and to set the speed curve for different speed effects. The effect of the example is shown below. It can be found that, unlike the previous example, the progress data on the right side is directly changed to the target number without a specific change process, while the dynamic effect of the progress bar is more vivid because it is no longer a linear change.

The css3-based implementation has higher performance and less code, but it only relies on css effects and is difficult to implement for complex animations. In addition, animating effects by modifying state can only work on nodes that already exist in the DOM tree. If you want to add entry and exit animations to a component in this way, you need to maintain at least two states to implement entry and exit animations, one state to control whether the element is displayed or not, and another state to control the properties of the element as it changes during the animation. In this case, the developer needs to spend a lot of effort to maintain the animation logic of the component, which is very complicated and tedious.

As an example of a dynamically increasing tab, the code is as follows.

The CSSTransitionGroup supports the following 7 properties.

In addition, the following points need to be noted when using CSSTransitionGroup.

The advantages of implementing animations with CSSTransitionGroup are.

The disadvantages of CSSTransitionGroup are also obvious.

In real projects, you may need some cooler animation effects, which are often difficult to achieve by relying on css3 alone. In this case, we may want to use some mature third-party libraries, such as jQuery or GASP, combined with the hook function of the lifecycle hook method in the React component, to achieve complex animations. In addition to the normal lifecycle of a React component, the underlying api TransitonGroup also provides a series of special lifecycle hook functions for its child elements, which can be combined with third-party animation libraries to achieve rich entrance and exit animations.

They are triggered with the timing shown in the figure. 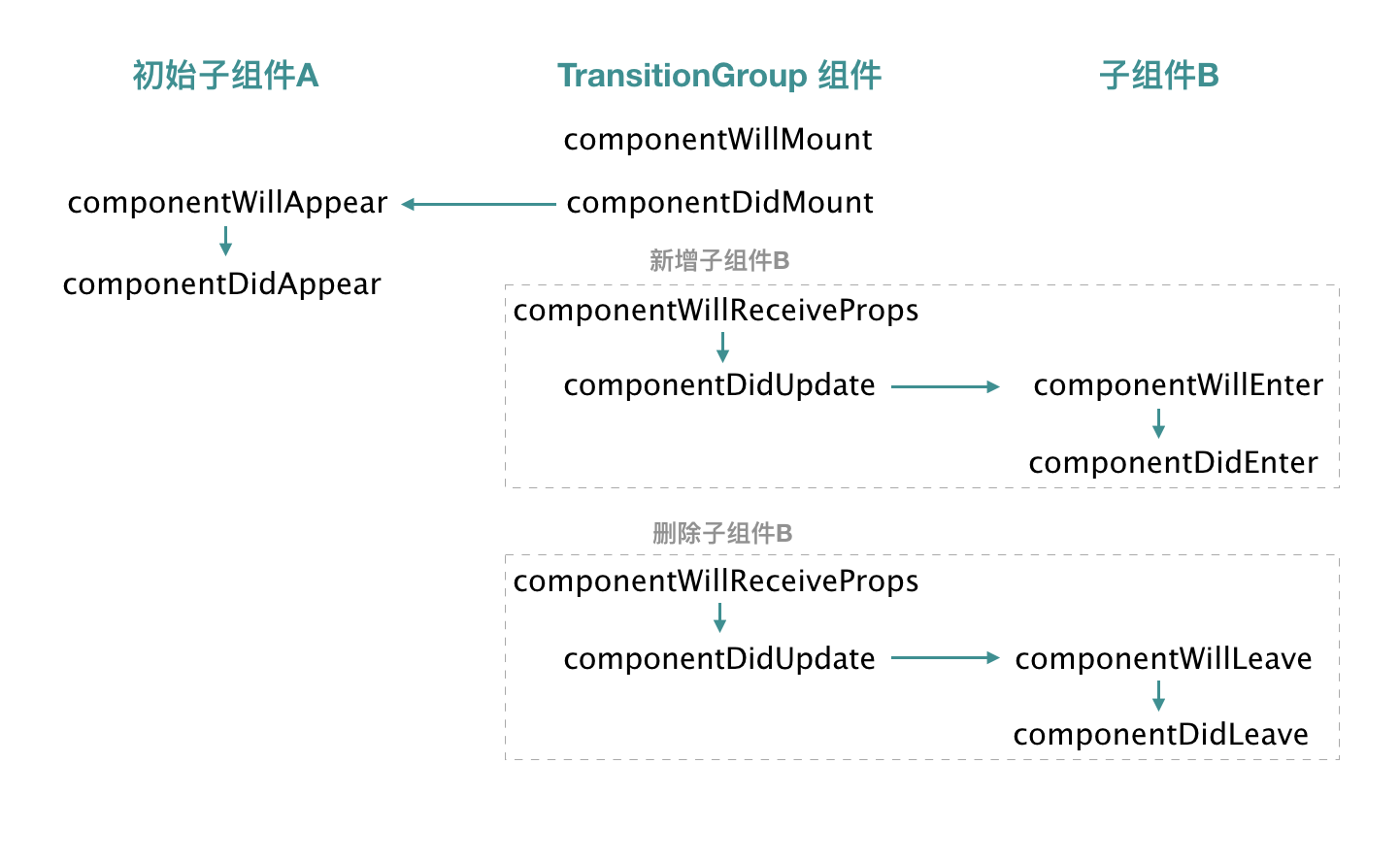 GASP is a flash-era animation library that has evolved since then, drawing on the concept of video frames, and is particularly well suited for long sequence animation effects. In this article, we use TransitonGroup and react-gsap-enhancer (an enhancement library that can apply GSAP to React) to complete an image gallery with the following code as follows.

When using TransitionGroup, always call callback in the componentnWillAppear(callback) , componentnWillEntercallback) , componentnWillLeave(callback) functions after the callback at the end of the logic to ensure that the TransitionGroup correctly maintains the state sequence of the child nodes. For more details on the use of GASP, please refer to the official GASP documentation and the blog post GSAP, the professional Web animation library This article will not go into detail.

Combined with hook to implement animation can support a variety of complex animation, such as time series animation, etc., because of the reliance on third-party libraries, the animation effect is often more smooth, user experience is better. However, the introduction of third-party libraries requires developers to learn the corresponding api, which also improves the code complexity.

We use Animated to implement an image flip effect with the following code.

In this example, we assume that the value of this.state.anim is increased by 1 for each click on the button, and the image needs to be rotated by 90°. In the render function, we set the interpolation function this.state.anim.interpolate to have an input interval of [0, 4] and an output interval of [‘0deg’, ‘360deg’]. When the animation is executed, the value of this.state.anim changes and the interpolation function calculates the rotation angle rotateDegree based on the current value of this.state.anim, which triggers the re-rendering of the component. Therefore, if the current value of Animated is 2, the corresponding rotation angle is 180deg. In the component rendering structure, you need to use Animated.div to wrap the animation node, and encapsulate rotateDegree as a css object and pass it into Animated.div as stlye to realize the change of the node’s css attribute of the node.

In the click event, considering that the button may be clicked several times in a row, we first use stopAnimation to stop the current animation, which returns a {value : number} object in the callback function, with the value corresponding to the last moment of the animation property value. Based on the obtained value value, the Animated.spring function is then used to start a new spring animation process, resulting in a smooth animation effect. Since we want the flip angle to be an integer multiple of 90° each time the rotation stops, we need to round the termination value of Animated.spring. We end up with the following effect:

The following points need to be noted when using it.

Animated does not directly modify the component state during animation, but directly modifies the element’s properties through its new object’s components and methods, without repeatedly triggering the render function.

When implementing animations in React, the first thing to consider is the ease of the animation and the usage scenario. For simple animations, css3 is preferred, followed by js-based interval animations. For element entry and exit animations, we recommend combining CSSTransitionGroup or TransitionGroup. When the animation effect to be achieved is more complex, try some good third-party libraries to open the door to wonderful dynamic effects.

Ps. All sample code in this article can be viewed at github