Web technology has advanced by leaps and bounds, but there is one area that has been impossible to break through —- games.

The performance requirements for games are so high that some large games struggle to run even on a PC, let alone in the sandbox model of a browser! However, despite the difficulties, many developers have never given up and want to make browsers run 3D games. 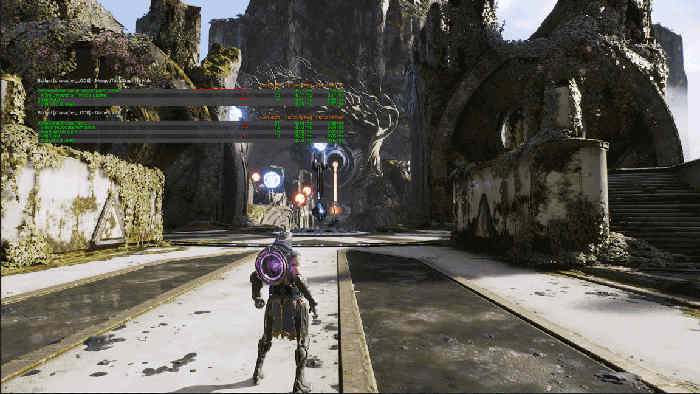 In 2012, Alon Zakai, an engineer at Mozilla, was working on the LLVM compiler and had the idea that many 3D games are written in C/C++, so if we could compile C/C++ into JavaScript code, they would run in the browser. As we all know, the basic syntax of JavaScript is highly similar to C language.

So, he started working on how to achieve this goal and made a compiler project called Emscripten, which compiles C/C++ code into JS code, but not just any JS, but a variant of JavaScript called asm.js.

In this article, we will introduce the basic usage of asm.js and Emscripten, and describe how to convert C / C++ to JS. 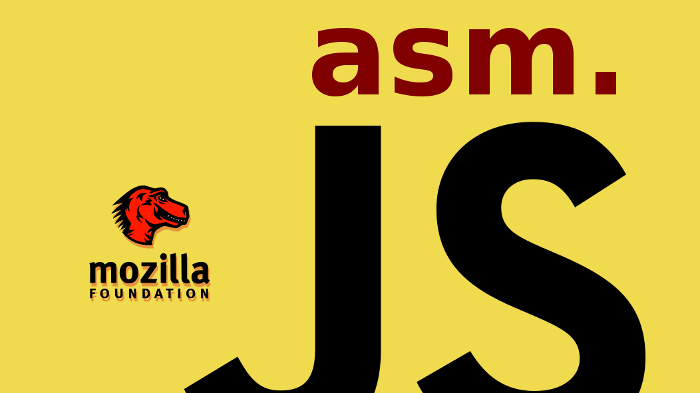 There are two biggest difficulties with compiling C / C++ to JS.

asm.js is designed to solve these two problems: its variables are always statically typed and it does away with the garbage collection mechanism. Other than these two points, it is not different from JavaScript, i.e. asm.js is a strict subset of JavaScript and can only use part of the latter’s syntax.

Once the JavaScript engine finds out that it is running asm.js, it knows that it is optimized code and can skip the syntax analysis step and go straight to assembly language. In addition, the browser calls WebGL to execute asm.js through the GPU, meaning that asm.js has a different execution engine than a normal JavaScript script. These are the reasons why asm.js runs faster. It is claimed that asm.js runs in the browser at about 50% of the speed of native code.

The two main syntactic features of asm.js are described below in turn.

Other data types, such as strings, booleans or objects, are not provided by asm.js at all. They are stored in memory as numeric values and called via TypedArray.

If the type of a variable is to be determined at runtime, asm.js requires that the type be declared beforehand and not changed, thus saving time in type determination.

The type declaration in asm.js is written in a fixed way, with Variable | 0 for integers and +Variable for floating point numbers.

In the above code, the variable x is declared as an integer and y is declared as a floating point number. An engine that supports asm.js will know that x is an integer when it sees x = a | 0, and will use the asm.js mechanism to handle it. If the engine doesn’t support asm.js, it doesn’t matter, the code will still work and you’ll get the same result.

Look at the following example.

In the above code, write 1 is normal JavaScript, the variable second only knows the type at runtime, which is slow, write 2 is asm.js, second is known to be an integer at declaration time, which is faster.

The arguments and return values of the function, both have to specify the type in this way.

In the above code, in addition to the arguments x and y, the return value of the function also needs to have its type declared.

asm.js has no garbage collection mechanism and all memory operations are controlled by the programmer. asm.js reads and writes memory directly through TypedArray.

Here is an example of reading and writing memory directly.

If a pointer is involved, it is handled the same way.

The above code is compiled into asm.js, which looks like the following.

Similarities and differences between asm.js and WebAssembly

If you’re familiar with JS, you may know that there is a technology called WebAssembly that also converts C/C++ into code that can be run by JS engines. So what’s the difference between it and asm.js?

The answer is that they basically do the same thing, but the code that comes out is different: asm.js is text and WebAssembly is binary bytecode, so it runs faster and is smaller. In the long run, the future of WebAssembly is brighter.

However, this does not mean that asm.js is definitely out, because it has two advantages: first, it is text, human readable and more intuitive; second, all browsers support asm.js and there are no compatibility issues.

Although asm.js can be written by hand, it is never the target language of the compiler and has to be generated by compilation. Currently, the main tool for generating asm.js is Emscripten. 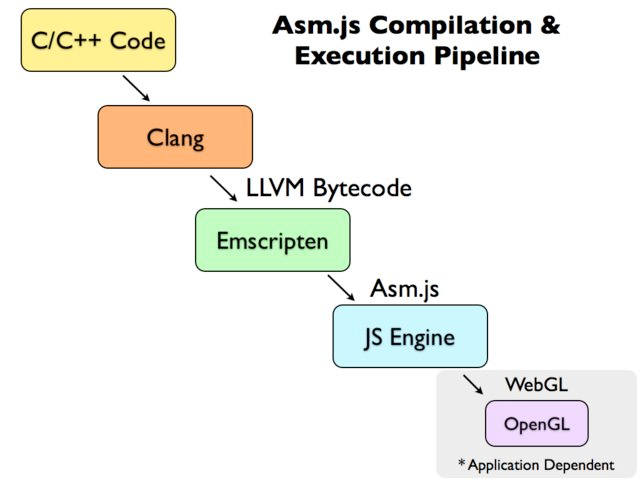 The installation of Emscripten can be done according to the official documentation. As there are many dependencies and it is a bit tricky to install, I found a more convenient way is to install the SDK.

Note that the last line is very important. Every time you re-login or create a new shell window, you have to execute this line once source . /emsdk_env.sh.

Then, turn this program into asm.js.

In the above code, the emcc command is used to compile the source code, which generates a.out.js by default. Executing a.out.js with Node will output Hello World on the command line.

Note that asm.js automatically executes the main function by default.

emcc is the compile command for Emscripten. Its usage is very simple.

Create a new file example1.cc and write the following code.

Then, compile this program into asm.js.

When the browser opens example1.html, the dialog box Hello World! will pop up.

Communication between C/C++ and JavaScript

Create a new file example2.cc and write the following code.

Then, the program is compiled into asm.js.

The browser will open the web page example2.html and display val2 == 42.

The following is an example of EM_ASM_ARGS. Create a new file example3.cc and write the following code.

In the above code, we pass a string into the JS code. Since there is no return value, EM_ASM_ARGS is used. Also, as we all know, in C / C++, a string is an array of characters, so the Pointer_stringify() method is called to convert the array of characters to a JS string.

Next, turn this program into asm.js.

The browser will open example3.html and a dialog box will pop up “Hello from C++!”. .

In the above code, EM_ASM executes JS code with a C function SquareVal. This function must be defined in the extern "C" block, and the JS code must also introduce it with the Module.cwrap() method.

In addition to Module.cwrap(), there is also a Module.call() method that can call C functions within JS code.

Returning to the previous example, now compile example4.cc into asm.js.

Note that the compile command gives an array of output function names with the -s EXPORTED_FUNCTIONS argument, and the function names are preceded by underscores. This example only outputs two C functions, so it should be written as ['_SquareVal', '_main'].

If you open example4.html in your browser, you will see a popup dialog box with the following content.

The other case is to export C functions for the JavaScript scripts inside the web page to call. Create a new file example5.cc and write the following code.

In the above code, SquareVal is a C function that is placed inside the extern "C" code block for external output.

Then, compile this function.

In the above code, the -s EXPORTED_FUNCTIONS parameter tells the compiler the name of the function that needs to be exported inside the code. The function name should be preceded by an underscore.

Next, write a web page that loads the example5.js you just generated.

If the execution environment is not a browser, but a Node, then it is easier to call C functions. Create a new file example6.c and write the following code.

Then, compile this script into asm.js.

Next, write a Node script test.js.

Run this script and you will see the output on the command line.

asm.js allows browsers to run not only 3D games, but also various [server software](https://github.com/dherman/asm.js/wiki/Projects- using-asm.js), such as Lua, Ruby and SQLite /kripken/sql.js). This means that for many tools and algorithms, you can use ready-made code and not have to write it all over again.

Also, since asm.js runs faster, some computationally intensive operations (like computing Hash) can be implemented in C / C++ and then call them in JS.

For a real transcoding example, take a look at the compilation of gzlib and refer to its Makefile for how to write.