exec.Command is usually used in Go programs if we want to execute a command, and it works well enough to achieve our goal.

If we logically need to terminate the process, we can quickly use the cmd.Process.Kill() method to end the process. But what happens when the command we want to execute will start other child processes to operate?

We can see that the PPID of this “watch top” is 1, which means that this process has become an “orphan” process.

So why is this happening, which is not what we expected, can be found in the Go documentation.

In linux, there is the concept of session, process group and process group, and Go also uses linux’s kill(2) method to send signals, so is it possible to kill to end all the child processes of the process to be ended?

The definition of kill(2) in linux is as follows.

and in the description of the method, the following can be seen. 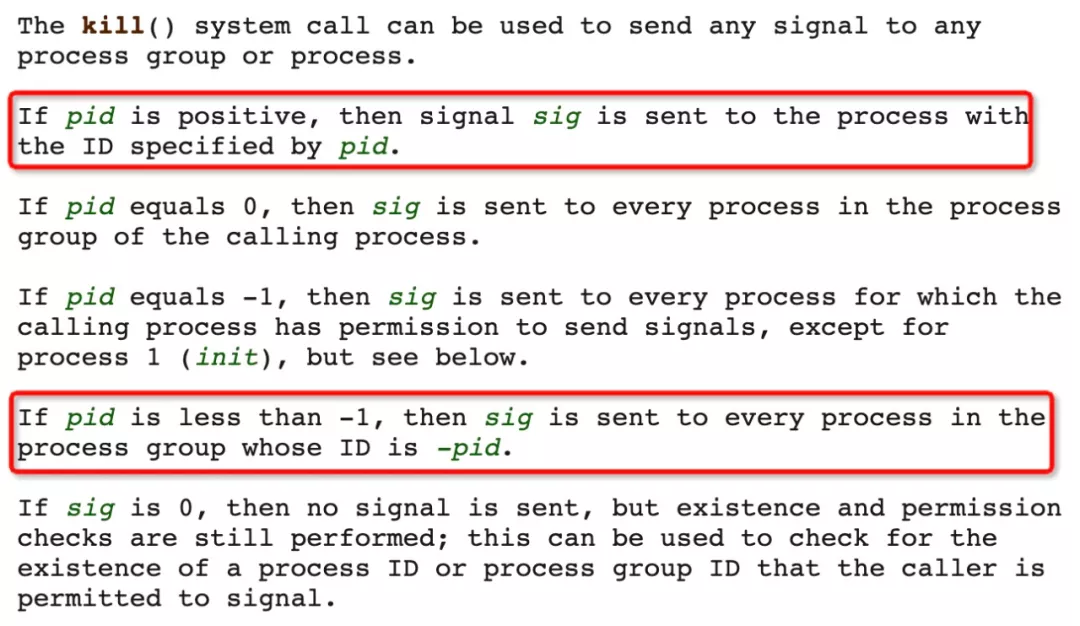 It will be found that the program is stuck, let’s look at the currently executing process.

In fact, such a low-level mistake was made. From the above figure, we can see that their process group ID is 27655, but we passed the id of cmd, that is, 27673, which is not the process group ID, so the program did not kill, resulting in cmd.

If both pid and pgid are set to 0, i.e. setpgid(0,0), then the current process will be used as the process group leader and a new process group will be created.

SysProcAttr to create a new process group, the modified code is as follows.

We find that the watch processes no longer exist, so let’s see if there are any orphan processes.

There are no more orphan processes and the problem has been completely solved at this point.

Assuming that the program to be called is also another application written by ourselves, it can be handled using Linux’s prctl method, which is defined as follows.

This method has an important option: PR_SET_PDEATHSIG, which is used to receive the exit of the parent process.

There are two files, main.go and child.go. main.go will call the child.go file.

Compile the two files separately in a Linux environment.

To execute the main binary.

To view their process.

We can see the processes of main and child, child is the child of main, we will kill the main process, and check the process status.

Then we can use PR_SET_PDEATHSIG to ensure that the parent process exits and the child process exits as well, roughly in two ways: by using CGO calls and by using syscall.

Amend child to read as follows.

Kill main again, and look at the process.

You can see that the child process has also exited, which means that the prctl called by CGO is in effect.

syscall.RawSyscall method provided in Go can also be used instead of calling CGO. In Go’s documentation, you can check the constants defined in the syscall package (check linux, if it is a local godoc, you need to specify GOOS=linux) and see several constants we want to use and their corresponding values.

where the value of the PR_SET_PDEATHSIG operation is 1 and the value of SYS_PRCTL is 157, then modify child.go to read as follows

To end the main process.

The child process has exited, and the final result has been achieved.

When we use Go programs to execute other programs, if the other programs also open other processes, then when we kill them, they may become orphaned processes and stay in memory. Of course, if our program exits illegally or is called by kill, it will also cause the process we are executing to become an orphan process, so to solve this problem, there are two ways to think about it.

But whichever way is used, it just provides an idea that needs special attention when we write server-side service programs to prevent orphan processes from consuming server resources.