The Observer pattern is a behavioral pattern that is a subscription-publishing mechanism. Objects are able to make announcements, and anyone who has registered observer status with the object will be able to receive notifications when such announcement events occur. Registering an identity means subscribing, and the event occurs means publishing.

There can be many observers doing subscriptions, at which point an observer chain is held in the observed object.

Due to the blocking one-way traversal nature of the observer chain, an unruly observer may hang up the notification chain of events that occur and furthermore hang up the whole thread.

However, solving this problem is not easy - for the most part we rely on the convention that observers must do their job in a disciplined manner and must finish their observations quickly. If you want to solve this problem completely, you will need a timeout interrupt mechanism, but this tends to make the entire code implementation of the observer pattern vague and complex, and in fact makes the technique infeasible.

This can be useful if you make your observer pattern implementations support asynchronous methods, but the problem with this is that the response latency of events is unpredictable (and left to the CPU thread scheduling feature). There are two ways to trigger non-blocking: either start a thread when the event occurs in order to traverse the observer chain and call back in turn, or facilitate the observer chain and call back in a new thread. Both approaches have their own characteristics, which you can evaluate in practice. In addition, using the standard library of concurrent threads provided by C++20 can help improve response latency.

Is it a misunderstanding?

I haven’t drawn a UML diagram for many years. In fact, I think this diagram is not very useful, it is not as straightforward intuition as reading the code directly, look at the diagram still have to translate it in the brain, look at the code, it seems that the brain when the CPU is very skilled ah, directly there.

The Observer pattern is so easy to understand that there is no need to design a proper scenario to explain it.

A customer looks to see if a product has arrived in the store. I’m going to order a copy of the South China Morning Post. I order fresh milk from the dairy every morning. And so on.

Having said that (boring on uml), to quote a graph. 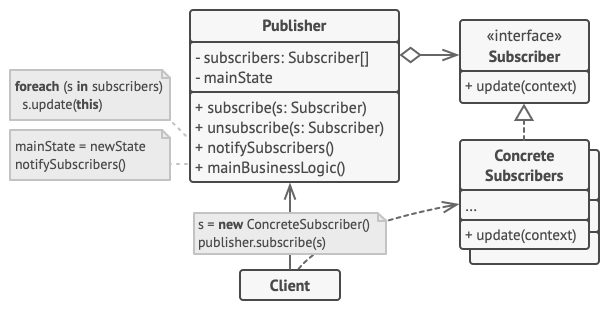 The new C++17 implementation of the observer pattern focuses on these aspects.

A default recommended observer base class template provides you with the base constructor prototype. Your observer class should derive from this template. Unless you intend to define your own interface (though, to a large extent, the need to do so is infinitely close to zero, since the observable template requires an Observer to have an interface like observe(subject const&)).

As for the observable template itself, it contains ‘+=’ and ‘-=’ operator overloads, so you can use a more semantic coding approach.

The code is as follows (referenced in hz-common.hh).

In the current implementation, the Managed template parameter of observable is useless, and the managed observer feature is not yet implemented, so you always have to manage each observer instance yourself. The observable only contains the weak_ptr of the observer, which sets the stage for adding asynchronous capabilities in the future, but for now its usefulness seems small.

There’s a lot of talk in the previous section, but that’s all the code in the core class template when it comes to concrete implementation, which isn’t too much.

The method used is.

The sample code is as follows.

Store is an observable object.

Where appropriate, store.exit() fires an event signal out, which will then be received by all observers and interpreted however they see fit.

We have not been able to solve the hard problem. The quandary raised above can only be solved by a realistic and enhanced version of the Observer pattern, Rx/ReactiveX. ReactiveX, however, is not a pure subscription pattern at all, and the threshold is too high.

So, or, maybe, next time consider a simpler Rx, you know ReactiveX already has RxCpp, but we might get a simple version of Rx, with the main purpose of adding asynchronous capabilities to the observer pattern, and just drop the operators.

There is another famous implementation of the subscriber, or observer, pattern: Qt’s Signal-Slot mechanism. This relies on Qt’s QObject to provide a mechanism by which a connect can be triggered by a signal. It is almost equivalent to the observer pattern, but emphasizes the notion of sender and receiver, which may not be necessary for most implementations of the observer pattern. But the signal slot mechanism provides developers before C++11 with the ability to call back a slot function with parameters without association, which no one could do at the beginning, even after C++11, due to the template change in the perfect forwarding sometimes syntax is not perfect, but also until after C++14/17 to have a comprehensive beyond. So now it is, slot this mechanism has lost its allure, just in the stubborn, and the actual application, unless you are using qt, most or just do an observable is also very light and easy.