In the Linux kernel implementation, the link layer protocol is implemented by the grid card driver, and the kernel protocol stack implements the network and transport layers. The kernel provides socket access to the higher application layers for user processes. The layered model of the TCP/IP network as we see it using the Linux perspective should look like the following.

How to network events

When data arrives on the device, a voltage change is triggered on the relevant pin of the CPU to notify the CPU to process the data.

You can also call this a hard interrupt

But as we know, the CPU runs very fast, but the network reads the data very slowly, which will occupy the CPU for a long time, making the CPU unable to handle other events, such as mouse movement.

So how to solve this problem in linux?

The linux kernel splits the interrupt processing into 2 parts, one is the hard interrupt mentioned above, and the other is the soft interrupt.

The first part receives the cpu voltage change, generates a hard interrupt, then does only the simplest processing, and then asynchronously hands over to the hardware to receive the information into the buffer. At this time, the cpu can already receive other interrupt information over.

The second part is the soft interrupt part, how does the soft interrupt do it? In fact, it is to change the binary bits of memory, similar to the status field that we usually write business to, such as in network Io, when the buffer has finished receiving data, it will change the current status to complete. For example, when epoll reads a certain io time to finish reading data, it does not directly enter the ready state, but waits for the next loop to traverse to determine the status before stuffing this fd into the ready list (of course, this time is very short, but compared to the cpu, this time is very long).

This is why epoll (formally introduced) was only known to be used in 2.6; the kernel did not support this approach until 2.4.

The overall data flow diagram is as follows.

A data from arrives at the NIC and goes through the following steps before a data reception is completed. 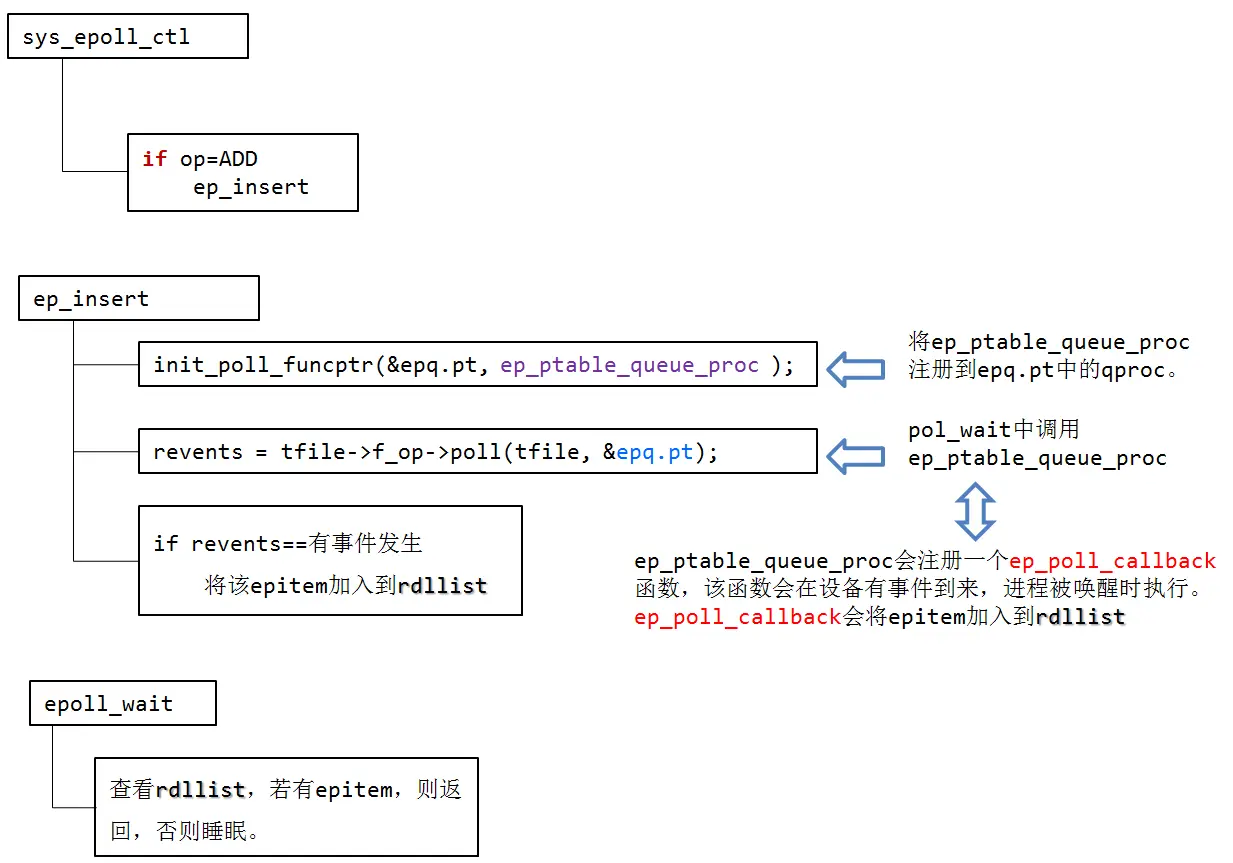 The poll function here is a callback function that is registered and handled in a soft interrupt. For example, the epoll program will register an “ep_poll_callback”

Take go epoll as an example.

core: NIC receives data -> dma+hard interrupt -> soft interrupt -> system dispatch to ksoftirqd, handle ep_poll_callback (note here that new connections come into the program, not by callback,but by accept) -> get the previously registered fd handle -> copy NIC data to the handle -> Operate on the fd according to the event type (ready list) Part of the code

epoll uses kmem_cache_create (slab allocator) to allocate memory to hold struct epitem and struct eppoll_entry. When an fd is added to the system, an epitem structure is created, which is the basic data structure for the kernel to manage epoll.

where ep_alloc(struct eventpoll **pep) allocates memory for pep and initializes it. Where the above registered operation eventpoll_fops is defined as follows: static const struct file_operations eventpoll_fops = { .release= ep_eventpoll_release, .poll = ep_eventpoll_ poll, }; In this way, a red-black tree is maintained in the kernel with the following approximate structure: clip_image002 Then comes the epoll_ctl function (omitting code such as error checking).

ep_insert is implemented as follows.

where struct eppoll_entry is defined as follows.

So the main function of ep_poll_callback function is to add the epitem instance corresponding to the file to the ready queue when the wait event of the monitored file is ready, and when the user calls epoll_wait(), the kernel will report the event in the ready queue to the user.

The epoll_wait implementation is as follows.

Promiscuous mode (English: promiscuous mode) is a term used in computer networks. It refers to the ability of a machine’s network card to receive all data streams passing through it, regardless of their destination address.

DMA transfers copy data from one address space to another, providing high-speed data transfers between peripherals and memory or between memory and memory. When the CPU initializes this transfer action, the transfer action itself is implemented and completed by the DMA controller. the DMA transfer method does not require the CPU to directly control the transfer, and there is no interrupt processing method like retaining the field and restoring the field process, through the hardware to open a direct data transfer channel for RAM and IO devices, making the CPU much more efficient.