The company’s Jupyter environment supports PySpark. this makes it very easy to use PySpark to connect to Hive queries and use. Since I had no prior exposure to Spark at all, I put together some reference material. 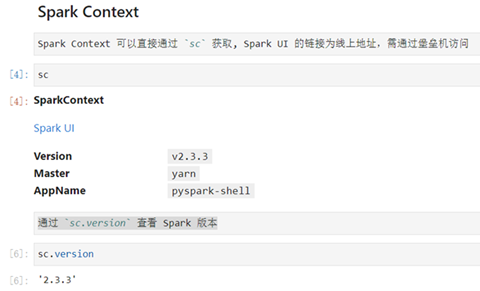 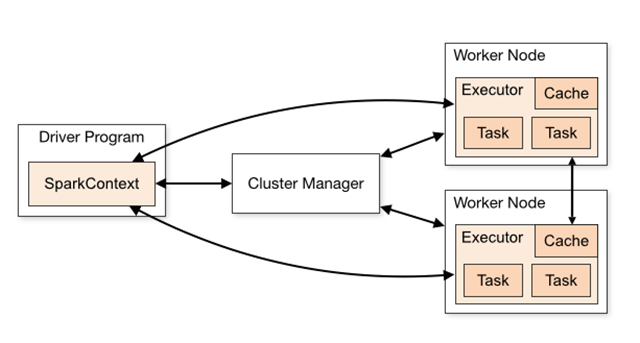 Only one active SparkContext can exist in each JVM, and you must call stop() to close the previous SparkContext before creating a new one.

Before Spark 2.0, SparkContext was the structure for all Spark functions, and the driver connected to the cluster (via resource manager) through SparkContext, because before 2.0, RDD was the foundation of Spark. If you need to create a SparkContext, you need SparkConf to configure the content of SparkContext through Conf.

After Spark2.0, Spark Session is also an entry point for Spark, in order to introduce dataframe and dataset APIs, while retaining the functionality of the original SparkContext, if you want to use the HIVE, SQL, Streaming APIs, you need Spark Session is the entry point.

SparkSession not only provides access to all the spark functions that sparkContext has, but also provides APIs for handling DataFrame and DataSet. 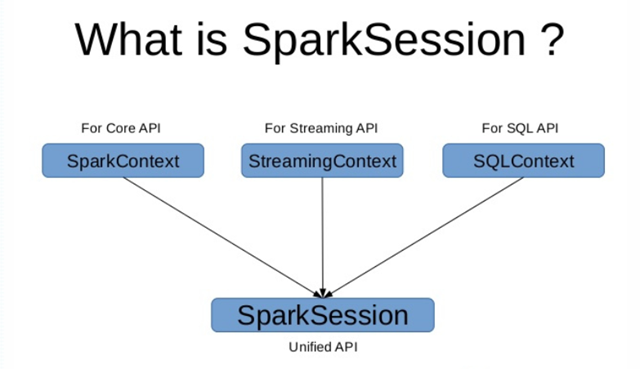 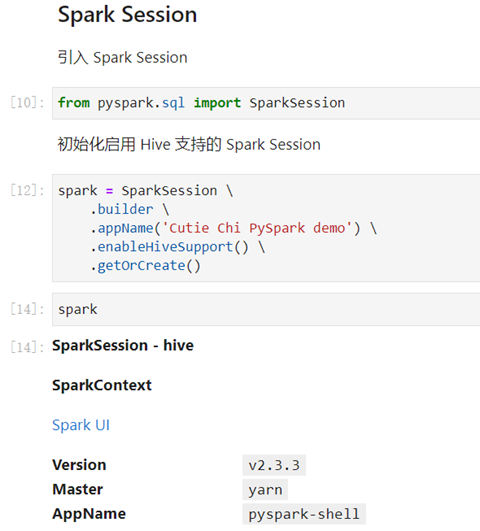 Here’s how to create a SparkSession.

The following are the parameters of SparkContext.

In the above parameters, master and appname are mainly used.

Here’s how we can create a SparkSession using Hive support. 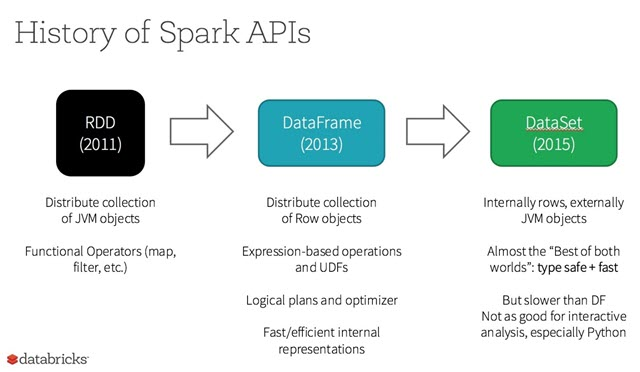 An RDD is an immutable collection of distributed elements of your data, distributed across nodes in a cluster, that can be processed in parallel by several underlying APIs that provide transformation and processing.

DataFrame is a distributed data set based on RDD, similar to the two-dimensional tables in traditional databases. dataFrame introduces schema. 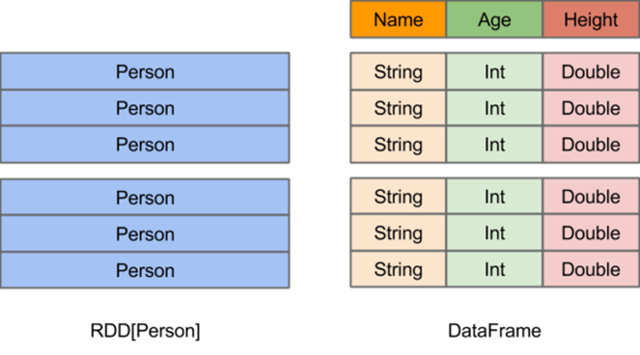 The above figure visualizes the difference between DataFrame and RDD.

A Dataset is a strongly typed domain-specific object that can be transformed in parallel by functional or relational operations. Each Dataset has an untyped view called a DataFrame, which is a dataset of rows. This DataFrame is a Dataset of type Row, i.e. Dataset[Row].

You can think of a DataFrame as an alias for a collection of some generic object Dataset[Row], and a row is a generic untyped JVM object. In contrast, a Dataset is a collection of JVM objects with explicit type definitions, specified by the Case Class you define in Scala or the Class in Java. 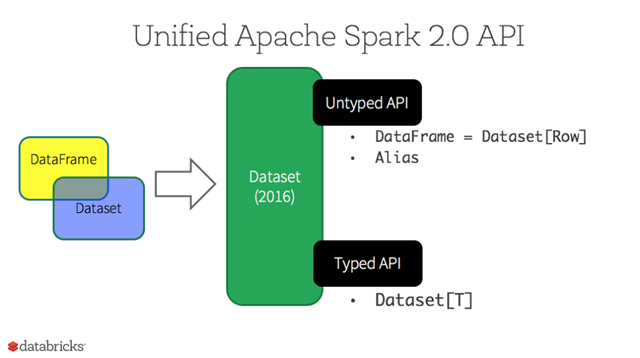 The earliest “DataFrame” (which began to be called “data frame”), originated from the S language developed by Bell Labs. data frame" was released in 1990, and its concepts are detailed in Chapter 3 of “Statistical Models of the S Language”, which highlights the matrix origin of the dataframe. The book describes DataFrame as looking very much like a matrix and supporting matrix-like operations; at the same time, it looks very much like a relational table.

The R language, an open source version of the S language, released its first stable version in 2000 and implemented dataframes. pandas was developed in 2009, and the concept of DataFrame was introduced in Python. These DataFrames are all homogeneous and share the same semantics and data model.

The need for a DataFrame comes from viewing data as a matrix and a table. However, matrices contain only one data type, which is too restrictive, and relational tables require that the data must first have a schema defined; for a DataFrame, its column types can be inferred at runtime and do not need to be known in advance, nor are all columns required to be of one type. Thus, a DataFrame can be thought of as a combination of a relational system, a matrix, or even a spreadsheet program (typically Excel).

First, DataFrames are ordered in both row and column directions; and rows and columns are first-class citizens and are not treated differently.

Those familiar with numpy (the numerical computation library containing definitions of multidimensional arrays and matrices) can see that this feature is very familiar, and thus the matrix nature of DataFrame can be seen.

Again using pandas as an example, a DataFrame can do transpose operations to get rows and columns to line up.

We can now formally define what a DataFrame really is.

A DataFrame consists of a two-dimensional array of mixed types, row labels, column labels, and types (types or domains). On each column, the type is optional and can be inferred at runtime. In terms of rows, a DataFrame can be viewed as a mapping of row labels to rows, with guaranteed order between rows; in terms of columns, it can be viewed as a mapping of column types to column labels to columns, again with guaranteed order between columns.

The existence of row labels and column labels makes it very convenient to select data.

Here index and columns are the row and column labels respectively. We can easily select a period of time (row selection) and several columns (column selection) of data. Of course, this is based on the fact that the data is stored sequentially.

As we can see from the example, just because the data is stored in order, we can keep the index unchanged and move down one row as a whole, so that yesterday’s data goes to today’s row, and then when we take the original data and subtract the displaced data, because DataFrame will automatically do alignment by label, so for a date, it is equivalent to subtracting the previous day’s data from the day’s data, so that we can do something like ring-by-ring operation. This is incredibly convenient. I’m afraid that for a relational system, you’d need to find a column to use as a join condition, and then do the subtraction, etc. Finally, for empty data, we can also fill in the previous row (ffill) or the next row (bfill). Trying to achieve the same effect in a relational system would require a lot of work.

Spark brings the concept of “DataFrame” to the Big Data space. Spark DataFrame only contains the semantics of relational tables, the schema needs to be determined, and the data is not guaranteed to be sequential.

For the different formats, the DataFrameReader class has subdivided functions to load the data.

DataFrame can also be constructed from JDBC URLs via jdbc

Used to write a DataFrame to an external storage system, accessible via DataFrame.write.

For different formats, the DataFrameWriter class has subdivision functions to load the data.

To store the contents of a DataFrame into a table.

Spark dataframe is immutable, so each return is a new dataframe