MQTT (Message Queuing Telemetry Transport) is an instant messaging protocol developed by IBM. It is designed with lightness, openness, simplicity, and specification in mind, and is therefore easy to implement. These features make it a good choice for many scenarios, including constrained environments such as machine-to-machine communication (M2M) and Internet of Things environments (IoT) that require very small code packages or very expensive network bandwidth. The MQTT protocol is a protocol designed for the communication of a large number of remote sensors and control devices with limited computing power and operating on low-bandwidth, unreliable networks, and has several key features, as follows.

Simply put, the MQTT protocol is a lightweight instant messaging protocol. Because it is used in environments where the hardware and network are not so good, it does not require too much equipment to adapt to difficult environments. It also has to ensure the quality of message delivery, so there are three release quality modes (QoS)

It is natively conditioned on the application layer protocol based on TCP/IP to shield the specific data interaction format of message transmission. That is, do not care how the underlying layer is transmitted, what format is used for data transmission in the field of the Internet of Things (IoT, Internet of Things) will have a big development in the future.

In IoT, open source and open standards are essential elements. the history of MQTT development is roughly as follows.

Currently MQTT is used by everyone for mobile push, such as FacebookMessenger, and is suitable for mobile application devices because of its small size, power saving, low protocol overhead and ability to efficiently deliver messages to one and multiple recipients. The protocol is simple, with a minimum header of 2 bytes. Compared to XMPP, MQTT is more lightweight and consumes less bandwidth by the user. The overall protocol can be split into: fixed header + variable header + message body

MessageType(0 and 15 reserved, 4 bytes in total)

Mainly used for PUBLISH (publish state) messages, to ensure the number of times the message is delivered.

Mainly used for PUBLISH (publish state) messages, indicating that the server wants to keep this push and push this message to it if a new subscriber appears. If not set then push to the currently subscribed is released.

is used to save the total size of the next variable header + message body. But it can not be saved directly, and is also scalable, the mechanism is the first 7 bits are used to save the length, the latter part is used for identification.

I gave an example, that is, if the size of the back of the calculation for 0 < length <= 127, normal preservation; if it is 127 < length < 16383, it is necessary to save two bytes, the first byte of the largest one position 1, that is, unfinished. Then the second byte continues to store.

The display needs to first subscribe to a topic called temperature via the MQTT protocol. 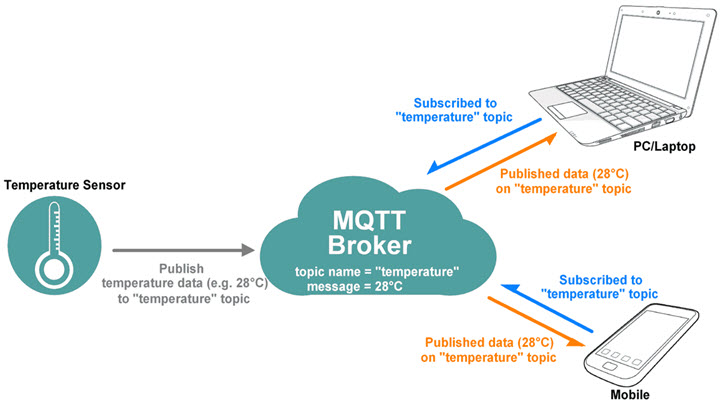 There are 2 other main roles in the protocol.

They are connected via the TCP/IP protocol. Because MQTT is a protocol, it cannot be used directly, as if it were the HTTP protocol. You need to find a library or server that implements this protocol to run it.