This paper presents a paper from the 2011 NSDI journal – Mesos: A Platform for Fine-Grained Resource Sharing in the Data Center, which implements Mesos to manage different computing frameworks, such as Hadoop and MPI, in a cluster. Although the Mesos cluster management system is a technology that was released more than 10 years ago and has been gradually replaced today by the more mainstream and general container orchestration system Kubernetes, it does solve some of the cluster management problems.

Apache Mesos and Kubernetes are both excellent open source frameworks and both support large-scale cluster management, but there is still an order of magnitude difference in the size of the clusters they both manage - a single Mesos cluster can manage 50,000 nodes, while a Kubernetes cluster can only manage 5,000 nodes, requiring many optimizations and limitations to reach the same order of magnitude.

Mesos was not originally designed to directly manage and schedule developer-submitted workloads, but rather to provide a set of interfaces that expose the cluster’s resources and interface to frameworks such as Hadoop and MPI simultaneously through this lightweight set of interfaces.

The Mesos cluster shown in the figure below runs both Hadoop and Mesos frameworks. If we ignore the modules related to Hadoop and MPI frameworks in the figure, we will find that the architecture becomes very simple and it consists of only Zookeeper cluster, Mesos master node and worker nodes. 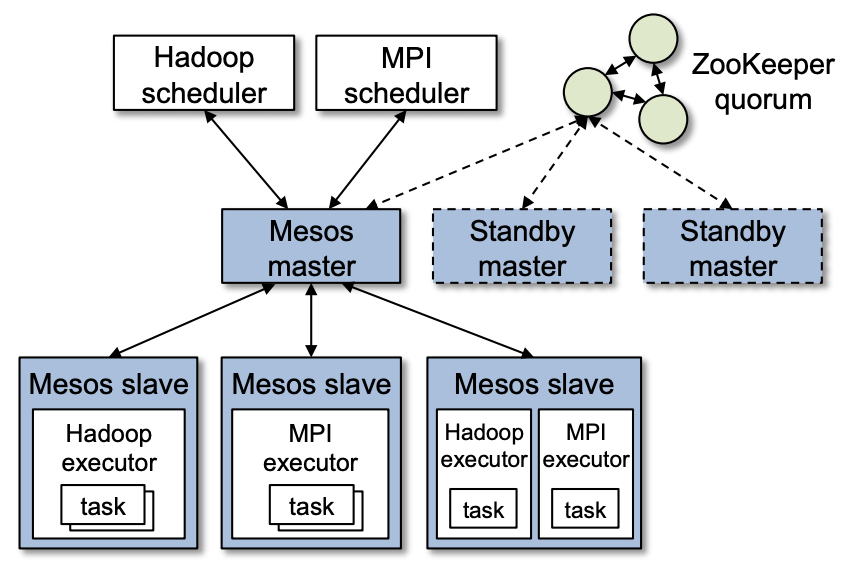 To ensure better scalability, Mesos defines a minimal set of interfaces that can accommodate resource sharing, giving control of task scheduling and execution to the framework through the interfaces shown below, while retaining only coarse-grained scheduling and resource management functions itself.

Because task scheduling in Mesos is a distributed process, it introduces the following three mechanisms to ensure the efficiency and reliability of the process.

In addition to providing good scalability and performance, Mesos, as a cluster scheduling management system, also faces the problem of isolating resources for different tasks. When Mesos was first released, container technology was not as popular as it is today, but it also utilized containers for operating systems to isolate the impact of different workloads and supported multiple isolation mechanisms with pluggable isolation modules.

We already covered the order of magnitude difference in cluster size that Mesos and Kubernetes can manage at the beginning of this article, so here’s a brief comparative analysis of the differences between the two in terms of schedulers, which helps us understand the decisions that the Kubernetes scheduler makes at design time, and how those decisions affect its scalability.

Note that improving system scalability is often a complex problem, and it can be even more complex in a system as large as Kubernetes, where the scheduler is not the only factor that affects scalability.

This two-tier scheduler design may seem complex, but it actually reduces the complexity and increases the scalability of the Mesos scheduler by

To achieve better scalability in a scheduling system one must face slicing, which inevitably leads to a scheduler that does not provide a globally optimal solution and significantly increases the complexity of the system. We can observe this from the evolution of CPU schedulers in Linux, Go languages, etc. Most of the original schedulers were single-threaded, and in order to improve the performance of the scheduler, multiple schedulers were used and work-stealing mechanisms were introduced to handle the imbalance of queues of tasks to be scheduled in multiple schedulers.

The built-in scheduler in Kubernetes v1.21 is still single-threaded, and it needs to traverse and sort these 5,000 nodes using different plugins in order to make the optimal scheduling decision among the global 5,000 nodes, which is one of the major reasons that affects its scalability. The global optimal solution sounds like a very nice design, but in more complex scenarios like scheduling, the local optimal solution can often meet the requirements as well, and when there is no business need to guarantee that constraint, the performance can be improved by multiple schedulers. 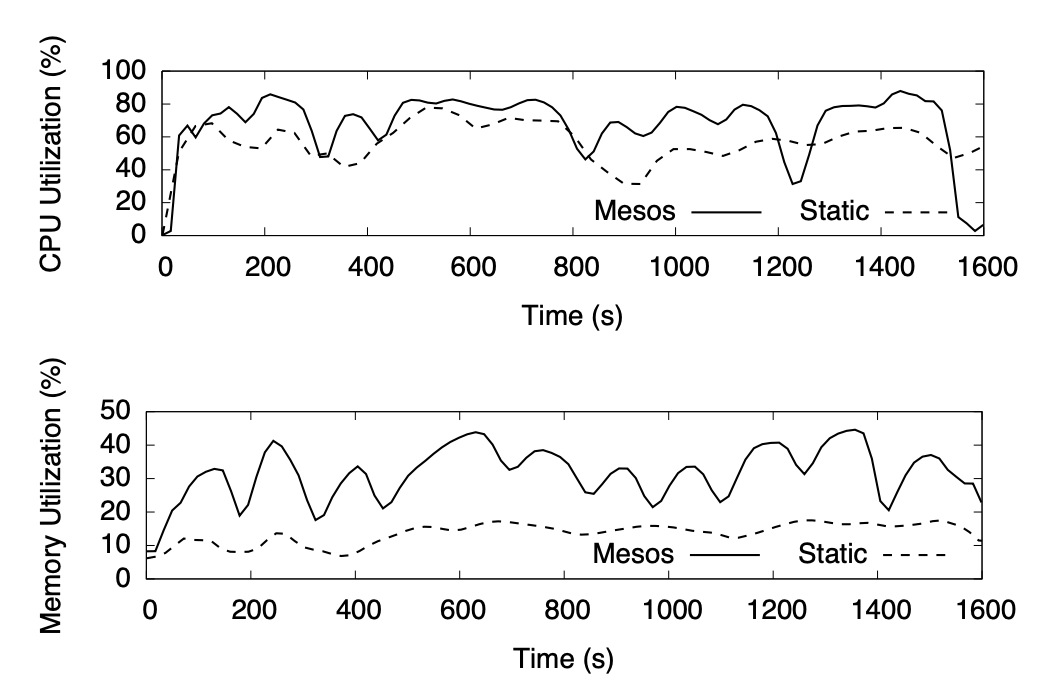 Understanding the problems Mesos solved when it emerged and how it was designed allows us to better understand the challenges we face today. Mesos was a very new technology when it first emerged and did offer a lot of flexibility compared to other products of the same time, but with the emergence of technologies like Yarn and Kubernetes, many of its scenarios have been replaced by new technologies, and this is an inevitable trend in technology development.