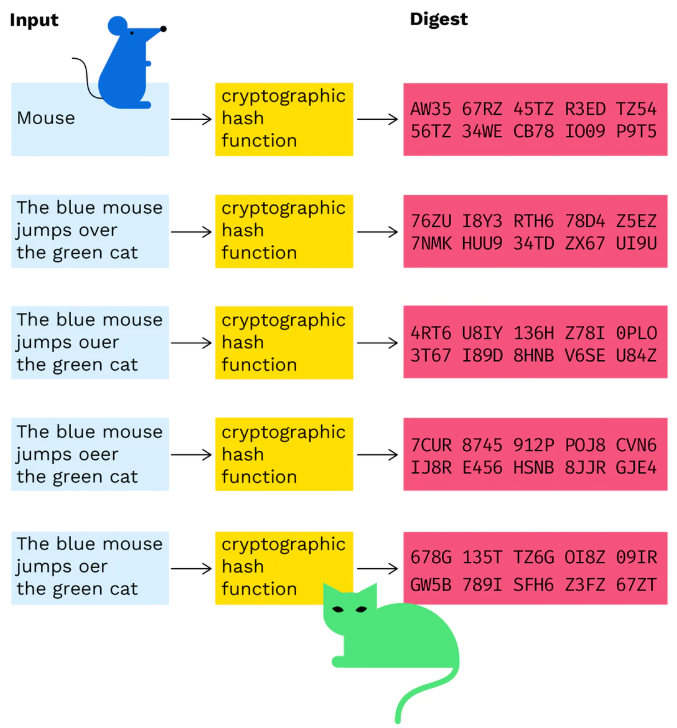 Hash algorithms applied in the field of information security also need to satisfy other key properties.

Damgard and Merkle defined the so-called “compression function”, which transforms a fixed-length input into a shorter fixed-length output, and this has had a significant impact on the design of Hash functions in cryptographic practice. The Hash function is designed to be based on the process of “compressing” the input group and the result of the previous compression process through a specific compression function repeatedly until the entire message is compressed, with the final output being the hash of the entire message. Although a rigorous proof is lacking, the vast majority of researchers in the industry agree that if the compression function is safe, then it will be safe to hash a message of arbitrary length in the form described above.

The difference between Hash and Encrypt

Mathematically speaking, both hashing and encryption are a mapping. Both are formally defined as follows.

The following diagram illustrates the hashing and encryption process. 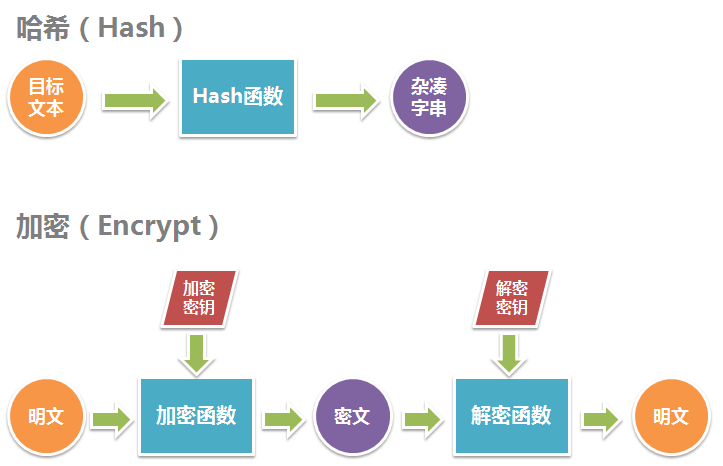 For applications like matching an MP3 file from a known list, one possible solution would be to use a traditional hash function - such as MD5 - but such a solution would be very sensitive to time shifts, CD read errors, different audio compression algorithms or volume adjustment implementation mechanisms. Using something like MD5 is good for quickly finding audio files that are strictly identical (in terms of the binary data of the audio file), but finding audio files that are all identical (in terms of the content of the audio file) would require the use of other, more advanced algorithms.

The application of Hash algorithm in information security is mainly in the following 3 areas.

We are familiar with the parity check algorithm and CRC check, these two checks do not have the ability to resist data tampering, they can detect and correct the channel error in data transmission to a certain extent, but can not prevent the malicious destruction of data. The “digital fingerprint” feature of MD5 Hash makes it one of the most widely used Checksum algorithms for file integrity.

Hash algorithms are also an important part of modern cryptographic systems. The one-way hash function plays an important role in digital signature protocols because of the slow speed of asymmetric algorithms. Digitally signing a Hash value, also known as a “digital digest”, can be considered statistically equivalent to digitally signing the document itself. And there are other advantages to such a protocol.

Authentication protocols are also known as challenge-authentication models: a simple and secure method when the transmission channel is listenable, but not tamperable.

MD5 and SHA1 are arguably the most widely used Hash algorithms, and they are both designed on the basis of MD4.

In 1997 Bob Jenkins published an article on hash functions in the Dr. Dobbs Journal [“A hash function for hash table lookup”](http://www. burtleburtle.net/bob/hash/doobs.html), which since its publication now has more extensions online. In this article, Bob included a wide range of existing hash functions, including his own so-called “lookup2”. Then in 2006, Bob released lookup3, which is widely used because it is fast (0.5 bytes/cycle, as Bob claims) and has no serious flaws. lookup3 is the Jenkins Hash. more For more on Bob’s hash function see Wikipedia: Jenkins hash function. memcached’s hash algorithm, which supports two Algorithms: jenkins, murmur3, default is jenkins.

Austin Appleby released a new hash function in 2008: MurmurHash. Its latest version is about twice as fast as lookup3 (about 1 byte/cycle), and it is available in both 32-bit and 64-bit versions. The 32-bit version uses only 32-bit math functions and gives a 32-bit hash, while the 64-bit version uses 64-bit math functions and gives a 64-bit hash. According to Austin’s analysis, MurmurHash has excellent performance, although Bob Jenkins claimed in Dr. Dobbs article that “I predict MurmurHash to be weaker than lookup3, but I don’t know the exact value because I haven’t tested it”. “MurmurHash is rapidly gaining popularity thanks to its excellent speed and statistical properties. The current version is MurmurHash3, which is used by Redis, Memcached, Cassandra, HBase, and Lucene.

CityHash is a string hashing algorithm released by Google in 2011, which, like murmurhash, is a non-cryptographic hash algorithm. The development of the CityHash algorithm was inspired by MurmurHash. Its main advantage is that most of the steps contain at least two independent mathematical operations. Google wanted to optimize for speed rather than simplicity, so it did not take care of the special case of shorter inputs. two algorithms were released by Google: cityhash64 and cityhash128. they compute They compute 64 and 128 bit hashes based on the string. The speed of cityHash depends on the CRC32 instruction and is currently SSE 4.2 (Intel Nehalem and later).

In 2011 Bob Jenkins released a new hash function of his own, SpookyHash (so named because it was released on Halloween). They both have 2x the speed of MurmurHash, but they both use only 64-bit math functions and no 32-bit version, SpookyHash gives 128-bit output.

In 2014 Google released FarmHash, a new family of hash functions for strings. FarmHash inherits many tricks and techniques from CityHash and is its successor. farmHash has multiple goals and claims to improve on CityHash in several ways. Another improvement of FarmHash over CityHash is that it provides an interface on top of several platform-specific implementations. This allows FarmHash to meet the requirements when developers simply want a fast and robust hash function for hash tables that does not need to be the same on every platform. Currently, FarmHash only includes hash functions for byte arrays on 32-, 64-, and 128-bit platforms. Future development plans include support for integers, tuples, and other data.

Which Hash function should I use?

Of course, the later release may be better in terms of functionality, but there may be some kind of limitation. For 32-bit machines, it is recommended to use MurmurHash, which is a bit faster than lookup3’s 32-bit.