GraphQL is both a query language for the API and a runtime for your data queries. GraphQL provides a complete set of easy-to-understand descriptions of the data in your API, allowing the client to get exactly the data it needs without any redundancy, and making it easier for the API to evolve over time, as well as for building powerful developer tools.

Over the last decade, REST has become the design standard for Web APIs, providing some great ideas such as stateless servers and structured access to resources. However, the REST API has shown to be too inflexible to meet the rapidly changing needs of accessing clients.

GraphQL was developed to meet the need for greater flexibility and efficiency! It solves many of the shortcomings and inefficiencies that developers encounter when interacting with the REST API.

The REST and GraphQL difference

To illustrate the main difference between REST and GraphQL when getting data from the API, let’s consider a simple example scenario: In a blog application, the application needs to display the post title of a specific user. It also displays the names of the last 3 followers of that user.

How can this situation be solved with REST and GraphQL?

Using the REST API, three interfaces need to be designed to fetch data. 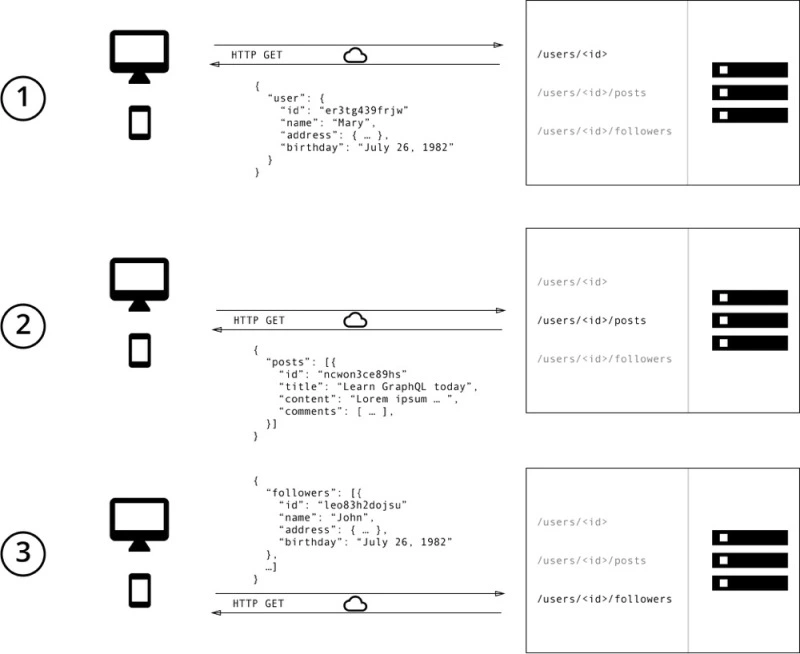 In GraphQL simply send a query to the GraphQL server with a specific data request. The server then responds using JSON objects to satisfy the request. 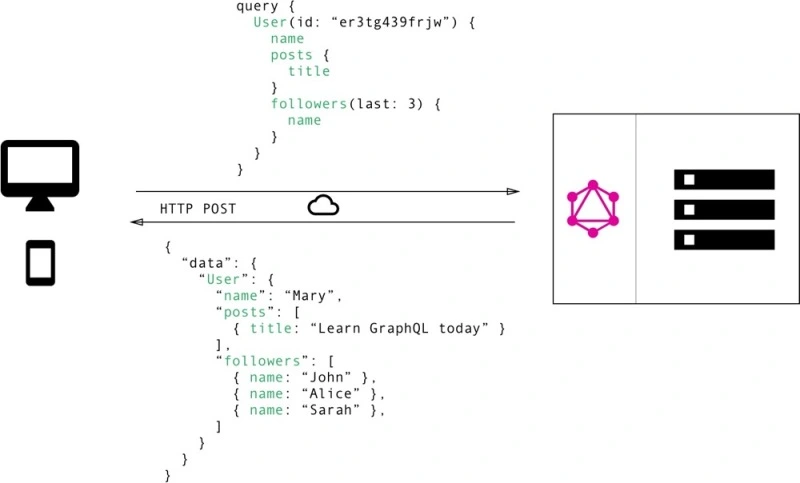 Using GraphQL, the client can specify exactly the data attributes needed in the query.

REST is the most general and commonly used interface design scheme. It is stateless and resource-centric, defining a set of URL conventions for how to manipulate resources, and the operation types are represented by HTTP Methods such as GET POST PUT DELETE.

GraphQL is not an alternative to REST, but another form of interaction: the front-end decides what to return to the back-end.

The main application scenario for the GraphQL API is the API gateway, which provides an abstraction layer between the client and the service. 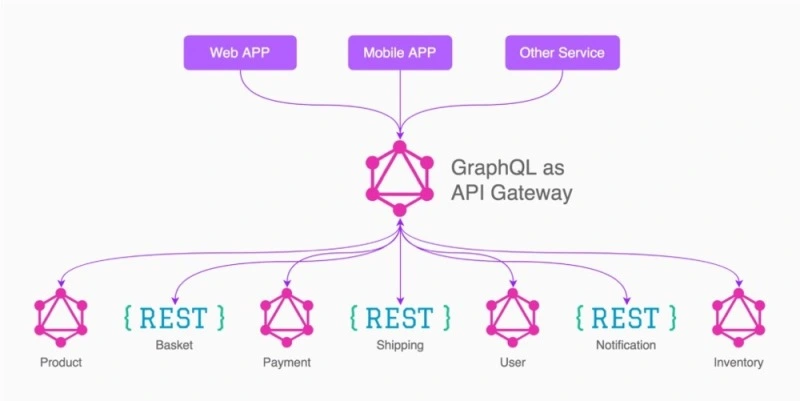 The biggest benefit of GraphQL is that the request response is streamlined, there are no redundant fields, and the front-end can decide what data is returned by the back-end. But note that the front-end decision depends on what data the back-end supports, so GraphQL is more like REST with streamlined return values, and the back-end interface can define all the functionality at once without the need for case-by-case development. Now for the benefits of GraphQL.

When choosing a platform to implement the GraphQL API, Node is a candidate because initially GraphQL was used for web applications and front-ends, and Node is the preferred choice for developing web applications because it is based on JavaScript. GraphQL can be implemented very easily with Node (assuming a schema is provided). In fact, the implementation using Express or Koa requires only a few lines of code.

The schema is defined using the types in npm’s graphql. query and Mutation are special schema types.

Most of the implementation of the GraphQL API lies in the schema and the parser. Parsers can contain arbitrary code, but the most common are the following five main categories.

GraphQL does not necessarily require a client. A simple GraphQL request is a regular POST HTTP request with the query content. We can use any HTTP proxy library (e.g. CURL, axios, fetch, superagent, etc.) to generate the request. For example, to send a request using curl in the terminal.

The following code can be run in any modern browser (to avoid CORS, please visit launchpad.graphql.com).

While building GraphQL requests is easy, there are many other things that need to be implemented, such as caching, as caching can greatly improve the user experience. Building client-side caches is not so easy, but fortunately, Apollo and Relay Modern, among others, provide client-side caching out of the box.

When shouldn’t I use GraphQL?

Of course, there is no perfect solution (although GraphQL is close to perfect), and there are some issues to keep in mind, such as

Finally, here is a list of the main reasons why GraphQL may not be a good choice.