Windows is the core of processing wireless data streams, it splits the streams into buckets of finite size and performs various calculations on them. 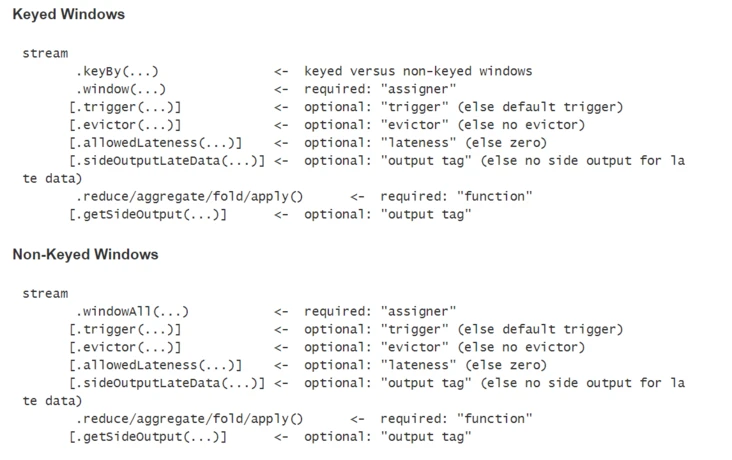 A window is created when the first element belonging to it arrives and is completely removed when the time (event or processing time) has elapsed after its end timestamp and the user-specified allowed delay. Also, Flink ensures that only time-based windows are removed, but not for other types (e.g. global windows). For example, if an event time based window policy creates a non-overlapping window every 5 minutes and allows a 1 minute delay, then Flink will create a new window for the first element whose timestamp belongs to the interval 12:00-12:05 when it arrives, until the watermark reaches the timestamp 12:06, when Flink deletes the window.

In Flink, each window has a Trigger and a function (ProcessWindowFunction, ReduceFunction, AggregateFunction or FoldFunction) associated with it. The function contains the computational logic that acts on the elements of the window, and the trigger is used to specify the conditions under which the window’s function is to be executed. The trigger policy is usually similar to “when the number of elements in the window exceeds 4” or “when watermark reaches the window end time stamp”. Triggers can also decide to clear the contents of a window at any time during its lifetime. The clear operation in this case only involves the elements of the window, not the window metadata. That is, new elements can still be added to the window.

In addition, you can specify an Evictor, which can remove elements from the window after the trigger has been triggered and before or after the function has acted.

Before defining the window, the first thing that needs to be clarified is whether our data streams need to be grouped or not. Using keyBy(...) will separate the wireless stream into logically grouped streams, and vice versa, without grouping the stream data.

In a grouped stream, any property of the incoming event can be used as a key for the grouped stream. Since each grouped stream can be processed independently of the other streams, multiple tasks are allowed in a grouped stream to perform window calculations in parallel. All elements that reference the same key will be sent to the same parallel task.

For ungrouped streams, the data source is not separated into multiple logical streams, and all window computation logic will be executed in one task.

After determining whether the windows are grouped or not, next we need to define the assigners, which define how the elements are assigned to the windows.

Time-based windows contain a start timestamp (greater than or equal to) and an end timestamp (less than), and the time difference between the two is used to represent the window size. Also, we can query the start and end timestamps through the TimeWindow provided by Flink, and we can get the maximum timestamp allowed for a given window through the maxTimestamp() method. 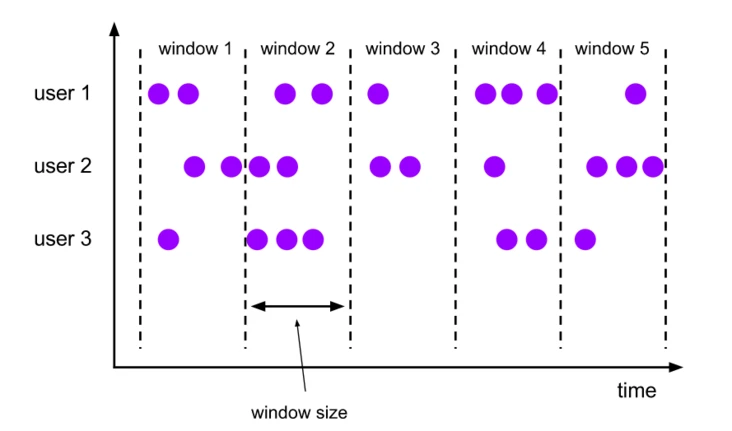 For example, in the figure below, a sliding window of 10 minutes in size is set with a sliding parameter (slide) of 5 minutes. In this case, a new window will be created every 5 minutes, and this window will contain some elements from the previous window. 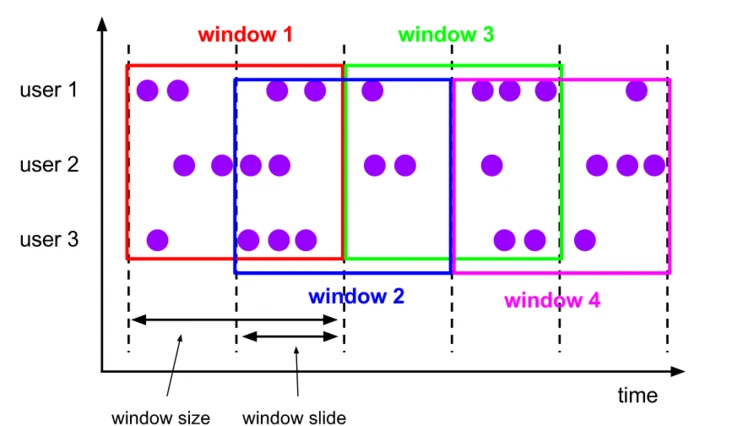 Similarly, we can set the offset for the window with the offset parameter. 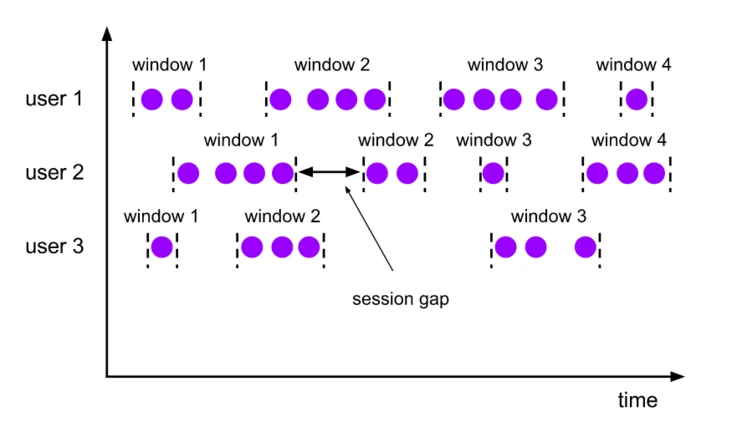 As above, fixed size session interval can be specified by Time.milliseconds(x) , Time.seconds(x) , Time.minutes(x) , dynamic session interval is specified by implementing SessionWindowTimeGapExtractor interface. Note: Since a session window does not have a fixed start/end time, it is calculated differently than a scrolling window or a sliding window. Inside a session window operator a new window is created for each received element, and if the time interval between these elements is less than the defined session window interval, the amen is merged into one window. To be able to perform a window merge, we need to define a Tigger function and a Window Function function for the session window (e.g. ReduceFunction, AggregateFunction, or ProcessWindowFunction. FoldFunction cannot be used for FoldFunction cannot be used for merging).

The global window allocator will assign all elements with the same key value to the same window. This window mode requires us to set a custom Trigger, otherwise no computation will be performed, this is because the global window does not have a natural end that can handle aggregated elements. 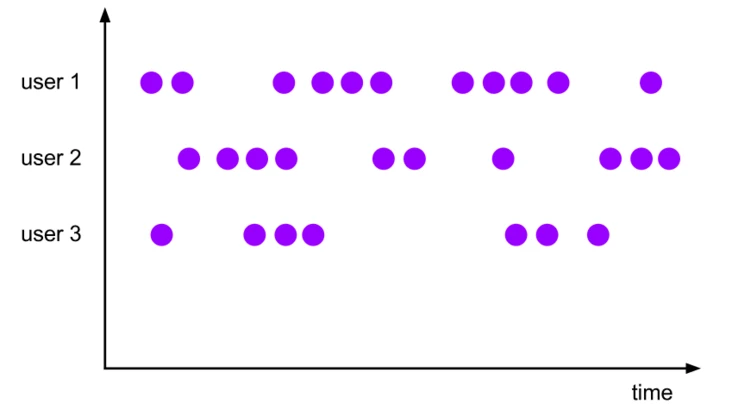 After defining the window allocator, we need to specify the computation that acts on each window. This can be done by specifying a Window Function, which will process each element of the window once the system has determined that a window is ready to be processed.

Window Functions are typically available as ReduceFunction, AggregateFunction, FoldFunction, and ProcessWindowFunction, of which the first two can be executed efficiently because Flink can aggregate each element incrementally as it arrives at the window. ProcessWindowFunction holds Iterable objects for all elements contained in a window, as well as additional meta information for the window to which the element belongs.

AggregateFunction can be called a generalized ReduceFunction, and it contains three element types: input type (IN), accumulator type (ACC), and output type (OUT).

The AggregateFunction interface has a method for creating an initial accumulator, combining the values of two accumulators into one accumulator, and extracting the output from the accumulator.

Note: fold() cannot be used for session windows or other mergeable windows

From ProcessWindowFunction you can get an iterative object containing all the elements in the window and a Context object to access time and state information, which makes it more flexible than other window functions. Of course, this also comes with a greater performance overhead and resource consumption.

where the key parameter is the key value obtained by the KeySelector specified in keyBy(). For keys indexed by tuples or referenced by string fields, the KEY parameter type here is a tuple type, which we need to manually convert to a tuple of the correct size in order to extract the key value from it.

Example: Return the number of events in the window, along with the key value and the window end time.

Flink window mode allows us to specify an optional Evictor in addition to WindowAssigner and Trigger. evictor can remove elements from the window after the trigger is started and before or after the window function acts.

All predefined Evictors are executed before the window function acts.

When using event time windows, there may be cases where elements arrive late. For example, the watermark used by Flink to track a single event time process has crossed the end time of the window to which the element belongs.

By default, when the watermark crosses the end time of the window, the delayed arrival of the element will be discarded. However, Flink allows us to specify a maximum delay time for a window that allows how long an element can be delayed before it is deleted (when the watermark reaches the end time), and its default value is 0. Depending on the trigger used, elements that arrive late but are not discarded may cause the window to be triggered again. This will be the case with EventTimeTrigger.

Flink’s side output allows us to get a stream of data from a deprecated element. As follows, you can get the side output stream by setting the sideOutputLateData(OutputTag) of the window.