The Go language’s memory allocator takes its cue from TCMalloc’s design for high-speed memory allocation. The core idea is to use a multi-level cache to sort objects by size and implement different allocation strategies by class.

As follows: objects are divided into chained tables in different memory size groups.

If it is a large object (>32k), then the page heap is allocated. as follows.

Although the go memory allocator was originally based on tcmalloc, it is now very different. So some of the structure above will have changed slightly, and I’ll ramble on about it below.

Because the source code for memory allocation is quite complex, it is important to see how breakpoint assembly is used for debugging before proceeding with the source code analysis.

The Go language currently supports several debuggers, GDB, LLDB and Delve. Only Delve is a debugging tool designed and developed specifically for the Go language. Moreover, Delve itself is developed in Go and provides the same support for the Windows platform. In this section we briefly explain how to debug Go assembler based on Delve. Project address: https://github.com/go-delve/delve

Then enter the package directory on the command line and type dlv debug to debug.

You can then use the break command to set a breakpoint on the main method of the main package.

The continue command allows the program to run to the next breakpoint.

View the assembly code corresponding to the main function with the disassemble command.

We can now use break breakpoints to calls to the runtime.newobject function.

Type continue to jump to the location of the breakpoint.

The print command is used to view the data of the typ.

You can see that the size printed here is 16bytes, because we have just one string type field inside the A structure.

Once you get to the mallocgc method, look at the arguments and local variables of the function with the args and locals commands.

Entrance to each object

As we can tell from the assembly, all the function entries are runtime.mallocgc, but the following two objects need some attention.

This code indicates that if a value of type int64 is less than 256 and is fetched directly as a cached value, no memory allocation will be made for this value.

As shown by this code, if a string object is created as “”, then a fixed address value will be returned directly and no memory allocation will be done.

You can also use the following example to debug when debugging, because the object allocation inside go is divided into large objects, small objects and micro-objects, so the following three methods are prepared to debug when creating each of the three kinds of objects.

Components of the allocator

runtime.mspan is the smallest granular unit inside the memory manager, and all objects are managed under mspan.

mspan is a linked table with upper and lower pointers.

npages represents the number of heap pages managed by mspan.

freeindex is the index of a free object.

elemsize indicates how many bytes an object will take up, equal to class_to_size[sizeclass], note that sizeclass will sizeclass method each time it is fetched, will sizeclass>>1.

limit indicates the address value of the end of span, equal to startAddr+ npages*pageSize.

The example diagram is as follows.

The figure alloc is an mspan array with 137 elements. The mspan array manages several pages of memory, each page is 8k, and the number of pages is determined by the spanclass specification.

There is an alloc array in runtime.mcache, a collection of runtime.mspan, which is the basic unit of memory management in Go. For objects of [16B,32KB] this part of the span is used for memory allocation, so all objects of this size in this interval are looked at from the alloc array, as will be analysed below.

When there is not enough space in runtime.mcache, it will go to runtime.mcentral and request the mspan of the corresponding size. mspan will be fetched from the partial list and the full list, and will be fetched in a lock-free way.

In runtime.mcentral, there is the spanclass identifier, and the spanclass indicates the type of this mcentral, as we will see below, when allocating objects of size [16B,32KB], the size of the object is divided into 67 groups.

So runtime.mcentral is responsible for only one spanclass specification type.

The data in runtime.mcentral will be hosted by two spanSet, partial for the free list and full for the used list.

The spanSetBlock is a data block that holds the mspan and will contain a data pointer to the 512 mspan stored inside. So the overall data structure of mcentral is as follows. For runtime.mheap attention needs to be paid to central and arenas. central is a collection of mcentral for each specification, which is created by traversing class_to_size during initialization; arenas is a two-dimensional array that manages memory space. arenas consists of multiple runtime.heapArena, each of which manages 64MB of memory space.

Note that the 64M heapArenaBytes above is only displayed on 64-bit machines other than windows, where it is 4MB. see the official notes below for details.

L1 entries and L2 entries represent the one-dimensional and two-dimensional values of arenas in runtime.mheap respectively. 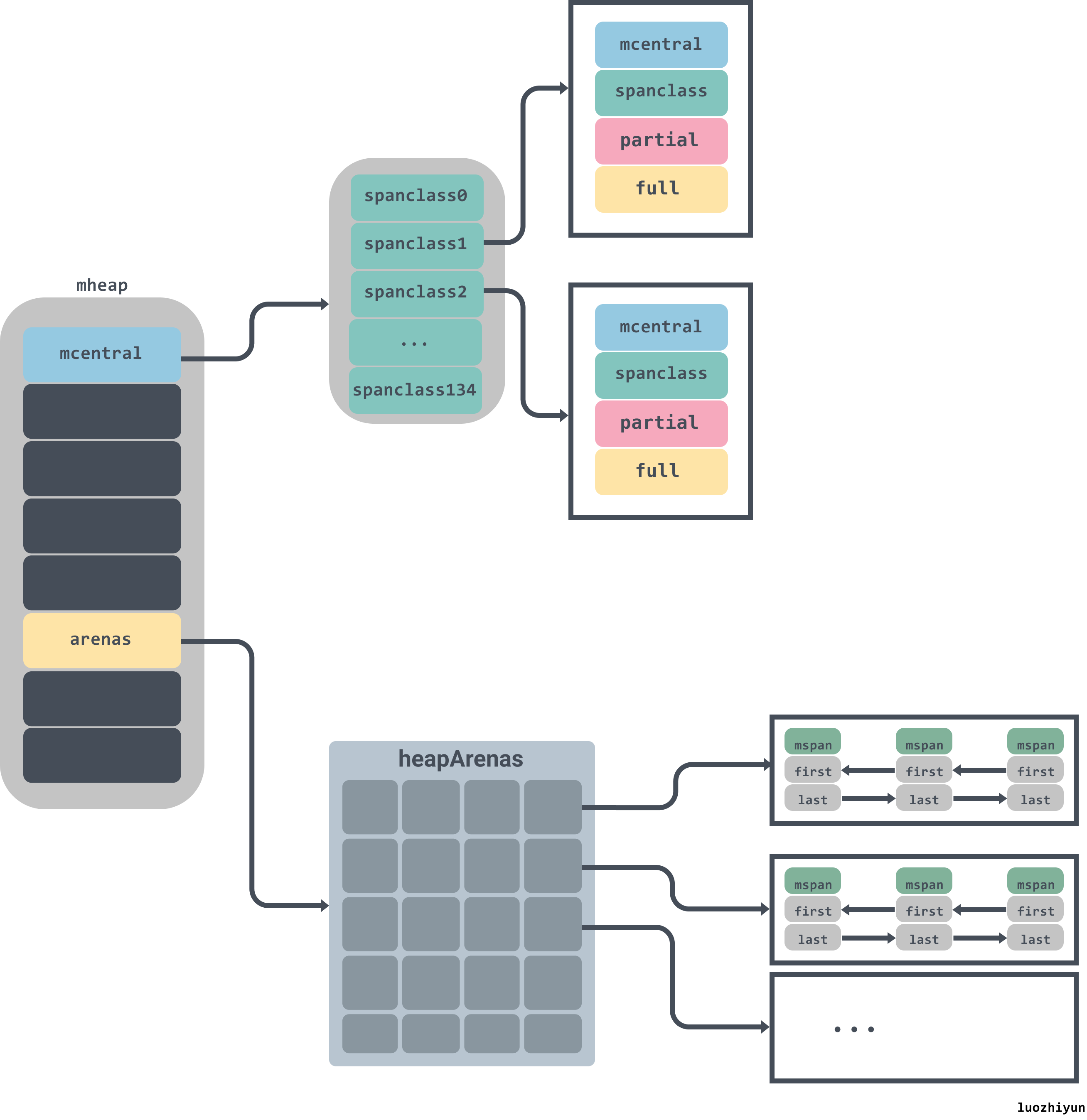 We know from decompiling the source code that all objects on the heap are allocated memory by calling the runtime.newobject function, which calls runtime.mallocgc.

As you can tell from mallocgc’s code, mallocgc allocates memory in 3 classes according to the size of the object.

From the above we can see that when allocating space larger than 32KB, a largeAlloc is used directly to allocate an mspan.

The allocation of memory is done on a per-page basis, with each page having a size of _PageSize (8K), and then it is necessary to determine how many pages need to be divided according to the size passed in, and finally call alloc to allocate from the heap.

Continue with the implementation of allocSpan.

Here another determination is made based on the size of the memory to be allocated.

Here’s a look at grow’s request for memory from the operating system.

The sysAlloc method calls runtime.linearAlloc.alloc to request a piece of memory from the pre-reserved memory; if not, the sysReserve method is called to request memory from the operating system; finally, a heapArena is initialised to manage the memory just requested, and the created The heapArena is then placed in the list of arenas.

This concludes the allocation process for large objects.

For objects between 16bytes and 32K the allocation is as follows.

Then it will get a pointer to span from the alloc array, try to get memory from the mcache by calling nextFreeFast, and if the mcache is running low, try to call nextFree to request memory from mcentral to the mcache.

allocCache is initialised to ^uint64(0) during initialisation, converted to binary, if it is 0 then it is occupied, the allocCache allows you to quickly locate the space to be allocated.

NextFree will determine if the current span is full, and if so, call the refill method to retrieve the available span from the mcentral and replace the span in the current mcache.

cacheSpan mainly looks for available spans from mcentral’s spanset, if not found then the grow method is called to request a new memory management unit from the heap.

runtime.mcentral.grow triggers an expand operation to request new memory from the heap.

The method runtime.mheap.alloc will be called inside grow to get the span, this method has already been covered above, if you don’t remember it you can look up the article.

This is the end of the allocation of micro-objects.

If the object is less than 16bytes in size and does not contain a pointer, then it can be considered a micro-object.

When allocating a micro-object, a judgement is made as to whether the memory block pointed to by tiny is sufficient, and if the space left in tiny exceeds the size, then memory is allocated directly on tiny and returned. 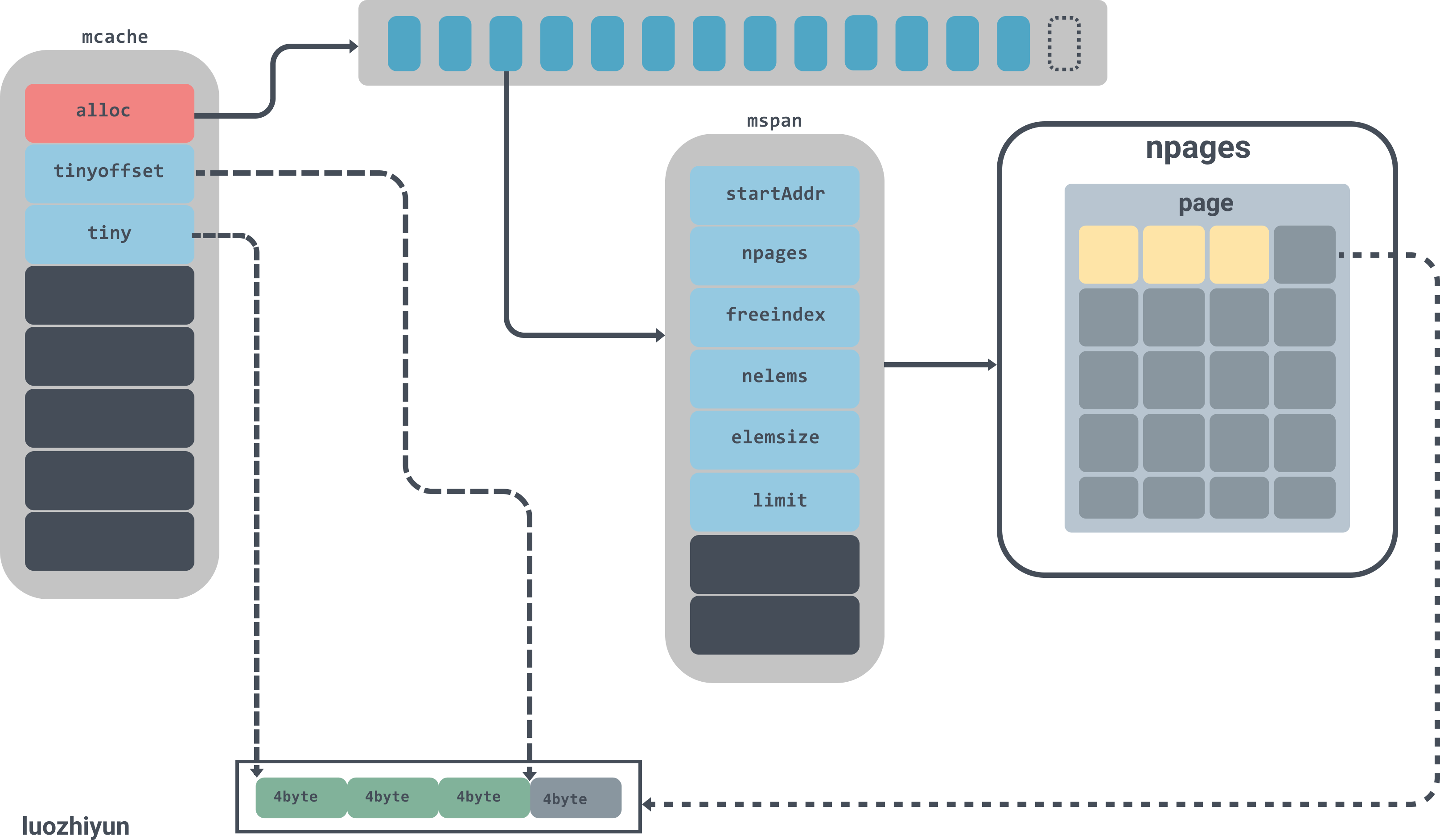 Here again I will use my diagram above to explain. First it will go to the mcache array and find the corresponding span. The properties of the span corresponding to the tinySpanClass are as follows.

The mspan corresponding to tinySpanClass has only one page, which can contain 512 elements (nelems); the size of each object in the page is 16bytes (elemsize), and 128 objects have been allocated so far (allocCount), but of course I can’t draw so many pages above, so I symbolically draw them.

The diagram above also shows that one of the objects in the page has been used by 12bytes, leaving 4bytes unused, so the values of tinyoffset and tiny will be updated.

This article started by describing how to debug the go assembly, and then went into three levels to explain how memory allocation works in go. For objects less than 32k, go can get the corresponding memory directly from mcache in a lock-free way. If there is not enough mcache memory, it will first go to mcentral to get memory, and then finally to mheap to request memory. For large objects (>32k) you can apply directly to mheap, but for large objects there are certain optimisations, when a large object requires less than 16 pages to be allocated it will be allocated directly from pageCache, otherwise it will be fetched from the heap pages.