In this article we discuss the Jump Consistent Hash algorithm, a minimalist and efficient consistent hashing algorithm.

MD5 is a common hash function that maps data of any size (the larger definition field) into a 16-byte hash (the smaller finite value field). The simplest hash function is modulo, which maps all integers (the larger definition field) into an integer interval (the smaller finite value field).

Suppose our server has 3 worker processes, serving the user at the same time. These worker processes have the same function and store the user’s state data. So how to decide which worker process serves a user? The easiest way to do this is to take the user ID and assign it to one of the 3 processes. 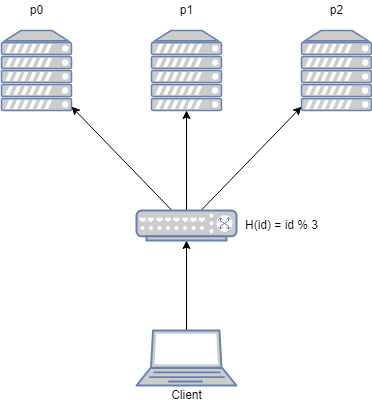 This seems to be working perfectly. As the number of users grows, 3 worker processes are overstretched and the server needs to be scaled up. We need to add one more worker process and have 4 worker processes serving the users at the same time. This is where the problem arises. 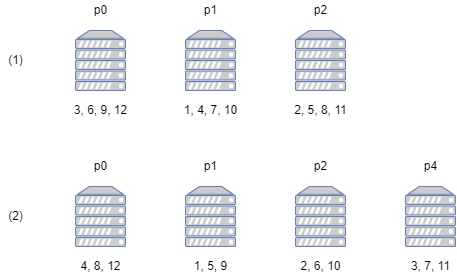 Suppose that before the expansion the server has 12 users online with IDs 1 to 12, then they are distributed among 3 processes as shown in figure (1) above. Now we add a worker process, which requires the users to be distributed among 4 processes, and the hash function should be changed to remainder of 4, which will cause the distribution of clients to change to the case shown in figure (2) above. As mentioned earlier, the server processes store the state data of the users; this expansion will cause the processes of almost all users to change, which will necessitate a large number of data migration operations. If the server has a large number of users online, the cost of the scaling operation becomes unacceptable.

To solve this problem, consistent hash has been proposed. Consistent hash is a special class of hash functions, which is characterized by the fact that when the number of buckets increases from $N-1$ to $N$, only $\frac{1}{N}$ of the mapping results change on average. Looking at the above example, we only need to take one user from each of p0, p1 and p2 to migrate to p4 when expanding the capacity, which means that only $\frac{12}{4} = 3$ IDs are changed.

At first glance, you may be confused: 2862933555777941757ULL What is it? What is left-right shift to floating point and then divide? Is it really possible to change the mapping of $\frac{1}{N}$ in just a few lines? Let’s explore this amazing algorithm step by step. 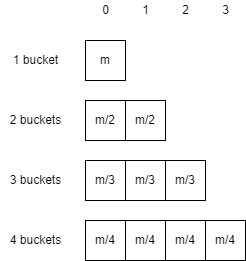 Based on this idea, we can implement a consistent hashing algorithm. Since the algorithm is based on random probability, in order to make each hash result consistent, we make random seeds of the values of the elements.

This algorithm can achieve consistent hashing, but it is a bit slow, with a time complexity of $\mathrm{O}(n)$. Is there a faster way? We note that when buckets are added, there is only a small probability that the elements will move to the newly added buckets, and a large probability that they will stay in place. If we could compute only when the elements move, the algorithm would be much faster.

Notice that elements only move as buckets are added, and each move is necessarily to the newest bucket. That is, if an element moves to bucket $b$, the bucket must have increased to $b+1$ to cause the move. Suppose an element just moved to bucket $b$ when the bucket grew to $b + 1$, can we find the target of the next move of this element? 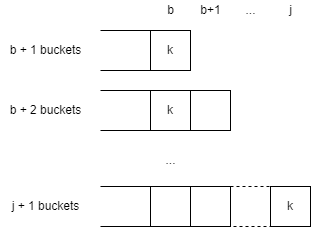 Now let’s reverse the idea. Now that the element moves to $b$ when the bucket is increased to $b+1$, we need to determine where this element will move next $j$. We can generate a random number $r$ between 0 and 1, such that $P_j = r$. Then we can determine $j$:

The improved algorithm is as follows:

In the above algorithm, each iteration finds the next position j of the element by using the formula (1), until j >= num_buckets.

To further improve the algorithm, we can use our own implementation of the random function, rather than relying on the system. Here we use the Linear congruential generator. This is an old random number generation algorithm, which is easy to implement. Its random numbers are generated iteratively, and the iterative formula is as follows:

In the Jump consistent hash algorithm, each iteration is like this:

So there’s a lot of wisdom in a little code. There are a few things that this article hasn’t gone into, such as the rigorous proof of the probability formula; why the multiplier is 2862933555777941757, and why the increment is 1. The random number generation algorithm is a very important topic, and this paper can only go so far. Compared to Karger’s algorithm, the Jump Consistent Hash algorithm is simple, fast, and does not require additional memory. Of course, it has a disadvantage: its value domain can only be the set of non-negative integers less than N. This means that it is not possible to simply remove the intermediate numbers. This means that you cannot simply remove the middle bucket, which would result in a discontinuity in the value domain.