KCP is a fast and reliable ARQ (Automatic Repeat-reQuest) protocol that uses a different automatic retransmission policy than TCP and has a lower network latency than TCP. In practice, KCP over UDP is often used instead of TCP for online games and audio/video transmission. The implementation of KCP is short and concise, which is good for learning. The ARQ mechanism of KCP is similar to TCP, but some of the policies are different. This article discusses the principles and implementation of KCP, including its ARQ mechanism, congestion control, and so on.

We first look at the main interfaces of KCP in Section 2; then Section 3 introduces the data structures in KCP, including message segments, KCP objects, and queues; Section 4 introduces the sending, receiving, and retransmission mechanisms of KCP; Section 5 analyzes the congestion control mechanism of KCP; and finally, a brief summary. This article is a bit long, but a lot of code is shown in it, so I think it is not too complicated.

Let’s start with the KCP usage interface. Open ikcp.h, and focus on these interfaces:

ikcp_create creates a KCP instance. The conv parameter passed in identifies the KCP connection, which means that every message segment sent by the connection will have conv on it, and it will only receive message segments with conv equal to it. The two communicating parties must first negotiate an identical pair of convs. KCP itself does not provide any handshake mechanism, and the negotiation of conv is left to the user, e.g., over an existing TCP connection.

KCP is a purely algorithmic implementation, it is not responsible for lower-level protocols, there are no internal system calls, and even the clock has to be passed in externally. So we need to:

After setting up the lower layer protocol and clock, you can call ikcp_recv and ikcp_send to send and receive KCP data. 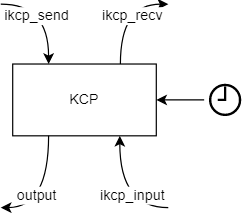 Before we dive into the details, let’s take a brief look at these functions, so we can see what they will probably do:

In the next few sections we will explore the details of the KCP implementation in more detail.

The structure of either message segment is the same:

You can see that there are several fields:

ts can be used to estimate the RTT (Round-Trip Time) and thus calculate the RTO (Retransmission TimeOut). We determine the timeout for each message based on the RTO, and if the message is not marked as delivered within the timeout, it will be retransmitted.

The size of the packet may exceed a MSS (Maximum Segment Size). At this point, a segmentation is performed, and frg indicates the number of subsequent segments, i.e., how many more messages belong to the same packet.

Each message is accompanied by wnd, which tells the sender the size of the remaining receive window, which helps the other side control the sending rate. We will discuss this in more detail in Section 5.

In the KCP implementation, the following structure is used to represent a KCP message segment:

In addition to the fields of the message, there are also the following fields: