String matching is a very common algorithm. What it does is, for the pattern string t, find the first occurrence of it in the target string s. For example, if t = "abcab", s = "ababcabd", the algorithm should return 2. Talking about string matching, we have to mention the KMP algorithm. KMP is a very powerful algorithm, which is very clever and can match strings in linear time complexity. In this article, we’ll learn about it.

In formal language: For a string t, there exists a maximum number 0 <= m < len(t) such that t[:m] == t[-m:] holds. We call m the maximum first and last match length. Note that m must be less than the length of t, otherwise it is meaningless – any string is always equal to itself.

Suppose the string s matches the pattern string t. We start with the 0th character, then the 1st, 2nd, and up to the kth character, and the match is successful; however, the kth + 1th character fails.

So next we let s[k+1] compare with t[pi[k]], if it’s equal, we continue to match the next characters; if it’s not equal - no matter, t[:pi[k]] has already matched, we go back to the pi array to get the maximum length of the first and last matches of this substring, and compare the corresponding characters in the same way.

With this in mind, it is easy to write the code for the KMP algorithm:

Suppose we find pi[k] , which is the maximum first and last match length of t[:k+1]. 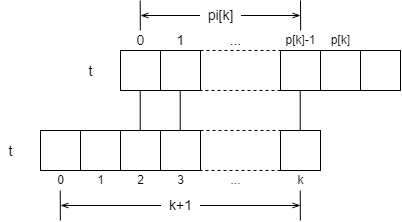 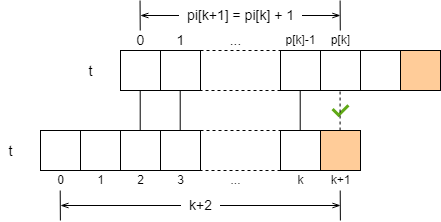 Next we just need to compare t[k+1] with t[pi[pi[k]-1]]. If they are equal, then pi[k+1] = pi[pi[k]-1] + 1; if they are not equal, then we repeat the operation: query the pi array to get the maximum first and last matches of the previous equal parts, and then compare the corresponding characters.

In this way, the code for computing the pi array is easy to understand.