What are pages and page replacement

We know that memory paging mechanisms are used on almost all modern operating systems and processors. In some embedded operating systems and in special cases where processor resources are tight and there is no need to consider inter-process safety, or even the concept of threads, memory paging is not necessary. Memory paging is proposed for virtual memory mechanisms, where each process has its own separate address space for inter-process isolation on most modern operating systems, which is called virtual memory. Virtual memory needs to have a mapping to physical memory, but the problem is that this mapping table takes up memory space, especially on 64-bit processors where the address space to be mapped is so large that if the addresses were mapped one to one, the mapping table would be larger than the physical memory. This requires a paging mapping of the memory into pages of a certain size, e.g. 4KB, which correspond to the 4KB pages in physical memory, which is the memory paging mechanism. However, the page table is still very large, and modern architectures generally use multi-level page tables to significantly reduce the space occupied by the page table, such as the four-level page table in Linux. 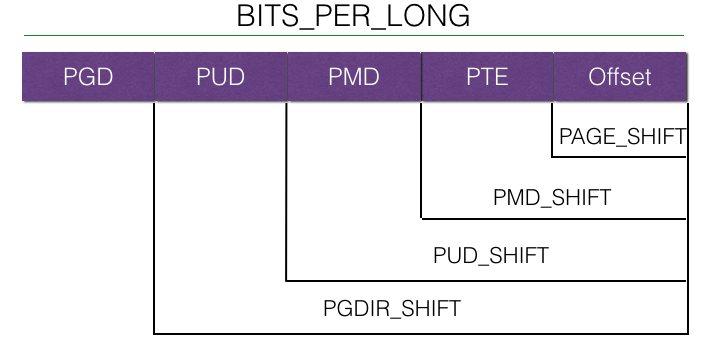 Linux even uses a five-level page table on the latest Intel Xeon processors, so I won’t go into the details of processor-specific support. It is worth noting that page tables require hardware support, i.e. support from the CPU’s memory management unit (MMU) . Here is the MMU support for an Intel Xeon Gold 6230, you can see that 40 bits physical means that its MMU supports 40 bits of hardware addressing, and 48 bits physical is the size of the virtual address space supported by the current Linux four-level page table.

And what is page replacement?

Page replacement also comes from a feature that almost all modern operating systems have - the swap mechanism. When physical memory is nearly full, the operating system moves some of the less frequently used pages to disk to make room for more frequently used pages in order to keep the whole system available. Of course, this comes at the cost of reduced performance, and the mechanism is not foolproof, as the system can still become almost unusable when actively used memory is also borrowed near the size of physical memory, but at least this mechanism gives the system a chance to recover on its own, rather than having to have some processes killed by the OOM Killer. This swap mechanism obviously requires a good algorithm to determine which part of the page is “stale”, which brings us to the topic of this article - Page Replacement Algorithm.

The current page replacement algorithm used by the Linux kernel is the two-stage software LRU, which is divided into two chains of active and inactive types and implements the software LRU (NFU) algorithm, which is referred to as LRU in the following as hardware-based LRU is not available in today’s architecture.

The problem of two-level LRU

The current algorithm has too much CPU overhead and often makes bad decisions.

The two classifications Active/Inactive is really a rather coarse granularity in today’s hardware environment. Mind you, it is not uncommon, if not common, in the Linux-ruled server world for memory to be on T. Intel’s recent rollout of Aeon memory in recent years has placed even higher demands on memory scheduling. This active/inactive classification is not a good one. Contexts like file access, where there are often periodic memory operations, and where pages move back and forth between the two tables, do not give a good indication of whether the page is active or not. And many code segments of executable files that are being executed are often removed simply because they have not been used for a fairly short period of time. This causes a delay in the response of the interactive process on Android and ChromeOS.

Since the LRU algorithm needs to periodically update the page access counter based on an inverted page table (rmap), however, the rmap has a rather complex data structure with poor locality, resulting in poor CPU cache hit rates when scanning the rmap. The cache hit rate of modern CPUs has a huge impact on execution speed, and a low cache hit rate can reduce CPU execution speed to 10% or less of its peak.

Yu Zhao’s recent Patch submission proposes the Multigenerational LRU algorithm, which aims to solve the problem of the two-level LRU now used by the kernel. This Multigenerational LRU borrows ideas from the ageing algorithm, dividing the LRU table into a number of Generations according to page generation (allocation) time. The LRU page sweep uses an incremental scan of the page table based on pages accessed during the cycle, unless the memory distribution accessed during that time is very sparse, and usually the page table has better locality compared to the inverted page table, which in turn improves the CPU’s cache hit ratio.

In the mailing list Yu Zhao illustrates his use of the changed algorithm in several simulation scenarios.

Changes to the Linux kernel’s page replacement algorithm can have a huge impact, even if they are only “minor” tweaks. As Linux is not limited to the usual scenarios, this Patch will need a long period of discussion and testing by various developers before it can finally be merged into the mainline. Although the majority of kernel developers have not yet commented on this, some have been positive and favorable about the new algorithm, so I also think this Patch will eventually make it into the mainline Linux kernel.