Memory cgroup leaks are a common problem in K8s (Kubernetes) clusters, resulting in nodes being stretched for memory resources, or nodes becoming unresponsive and having to restart the server to recover. Most developers use regular drop cache or disable kernel kmem accounting to circumvent this problem. This paper analyses the root cause of memory cgroup leaks and provides a solution to fix the problem at the kernel level, based on a practical example from the NetEase Digital Sail kernel team.

The O&M monitoring found that some cloud host computing nodes and K8s (Kubernetes) nodes were experiencing abnormally high load, specifically the system was running very stuck, load was constantly at 40+, some of the kworker threads had high cpu usage or were in D status, which had affected the business and needed to be analyzed for specific reasons. 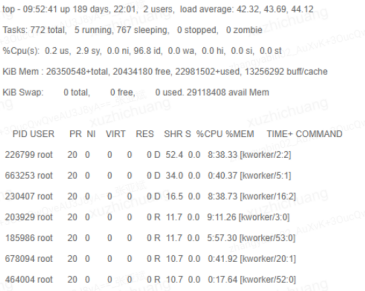 perf is an essential tool for cpu usage anomalies. Looking at hotspot functions via perf top, we find that the kernel function cache_reap has intermittent high usage.

Looking at the corresponding kernel code, the cache_reap function is implemented as follows 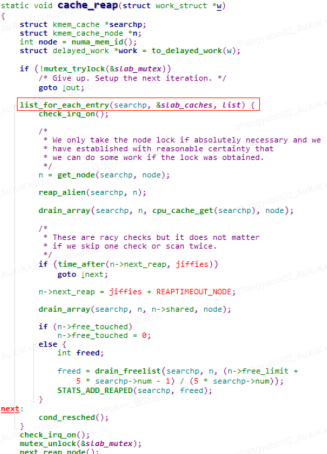 It is easy to see that this function iterates through a global chain of slab_caches, which records information about all slab memory objects on the system.

Analysis of the code flow associated with the slab_caches variable shows that each memory cgroup corresponds to a memory.kmem.slabinfo file.

In the end, we started with the original function, cache_reap, and since this function consumes more CPU, we traced it directly to analyse what was taking longer to execute in the code.

Identifying the root cause

Tracing the cache_reap function through a series of tools shows that the number of slab_caches chain table members is in the millions, a number that differs significantly from the number we actually calculated.

The number of memory cgroups had already accumulated to 20w+ when we checked the current cgroup information by cat /proc/cgroup. This number of cgroups on a cloud host compute node is clearly not normal, and even on a K8s (Kubernetes) node, this number of cgroups is not likely to be generated by the container business.

For a detailed explanation, see the following.

This can lead to memory cgroup leaks in the event of file operations.

Once the trigger scenario for a memory cgroup leak has been analyzed, it is much easier to reproduce the problem.

By analyzing the memory cgroup leak, we have basically figured out the root cause of the problem and the trigger scenario, so how do we solve the leak problem?

Since cgroup leaks are caused by unrecoverable cache memory, the most straightforward solution is to clean up the system cache with “echo 3 > /proc/sys/vm/drop_caches”.

However, this will only alleviate the problem and will still result in cgroup leaks. On the one hand, you need to configure a daily task to drop cache, and on the other hand, the drop cache action itself will consume a lot of cpu, which will affect the business. For nodes that already have a lot of cgroup leaks, the drop cache action may get stuck in the process of cleaning up the cache, causing new problems.

The kernel provides the cgroup.memory = nokmem parameter to disable the kmem accounting function. After configuring this parameter, the memory cgroup will not have a separate slabinfo file, so that even if there is a memory cgroup leak, it will not cause the kworker thread to have a high CPU.

However, this solution requires a reboot to take effect, which will have some impact on the business. Moreover, this solution cannot completely solve the fundamental problem of memory cgroup leakage, but can only alleviate the problem to a certain extent.

The 2 triggers found in the above analysis that cause cgroup leaks can both be eliminated.

In the first case, we can confirm that the cron task can be disabled by communicating with the corresponding business module.

In the second case, you can use loginctl enable-linger username to set the corresponding user as a resident user in the background.

Once set as a resident user, the systemd-logind service will create a permanent memory cgroup for the user when he logs in, and the user can reuse this memory cgroup every time he logs in. It will not be deleted when the user logs out, so there will be no leaks.

Solutions in the kernel

In the process of locating the problem, Google has identified many container scenarios where cgroup leaks have been reported in the centos7 series and 4.x kernels, mainly due to imperfect kernel support for the cgroup kernel memory accounting feature, when K8s( Kubernetes)/RunC has a memory cgroup leak problem when using this feature.

The main solutions to this problem are the following:

We are considering whether there is a better solution to “completely” solve the cgroup leakage problem at the kernel level?

After a deeper analysis of the memoy cgroup leak, we see that the core problem is that the cgroup directory created temporarily by systemd-logind is automatically destroyed, but the cache memory and associated slab memory generated by the file reads and writes is not immediately reclaimed, and because of the existence of these memory pages, the cgroup management structure’s reference count cannot be cleared due to the existence of these memory pages. So although the cgroup-mounted directories are deleted, the associated kernel data structures remain in the kernel.

Based on our analysis of the community’s solutions to this problem, and the ideas provided by Ali cloud linux, we implement a simple and straightforward solution.

This kernel thread has the following characteristics.

The core process of a recycle thread is as follows. 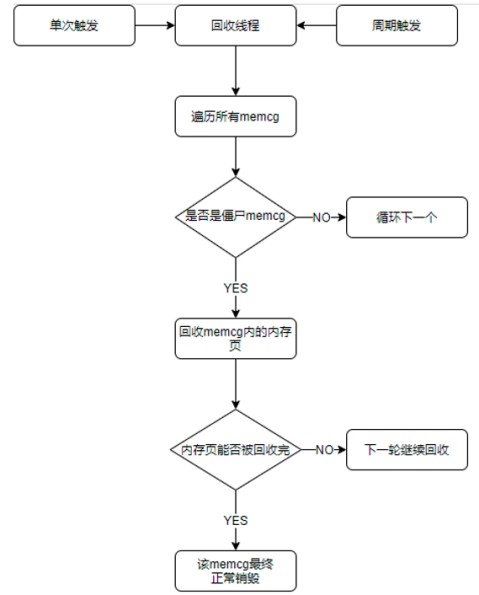 Functional and performance tests were performed on kernels that were merged into the kernel recycling thread, with the following results.

After the kernel recycling thread is enabled, it passes the kernel LTP stability test normally and does not increase the risk of kernel stability.

We can see that by adding a new kernel thread to recycle the residual memory cgroup, we can effectively solve the problem of cgroup leakage with a smaller resource usage. This solution is already in use in NetEase Private Cloud and has effectively improved the stability of NetEase’s container business.

The above is our analysis of the memory cgroup leak problem, the solution to the problem, and a way of thinking to solve the problem at the kernel level.

In our long-term business practice, we have learned that the use and requirements of the Linux kernel for K8s (Kubernetes)/container scenarios are comprehensive. On the one hand, the whole container technology is mainly built on the capabilities provided by the kernel, so it is essential to improve the stability of the kernel and the ability to locate and fix bugs in the relevant modules; on the other hand, the kernel has a lot of optimisations/new features for the container scenario. We also continue to pay attention to the development of related technologies, such as the use of ebpf to optimize the container network, enhance kernel monitoring capabilities, and the use of cgroup v2/PSI to improve the resource isolation and monitoring capabilities of containers, which are also the main directions to promote the internal implementation of NetEase in the future.