TiDB is an open source distributed relational database designed and developed by PingCAP, which is a converged distributed database product that supports both Online Transaction Processing and Online Analytical Processing (HTAP).

In terms of kernel design, TiDB distributed database splits the overall architecture into several modules, and each module communicates with each other to form a complete TiDB system. The corresponding architecture diagram is as follows. 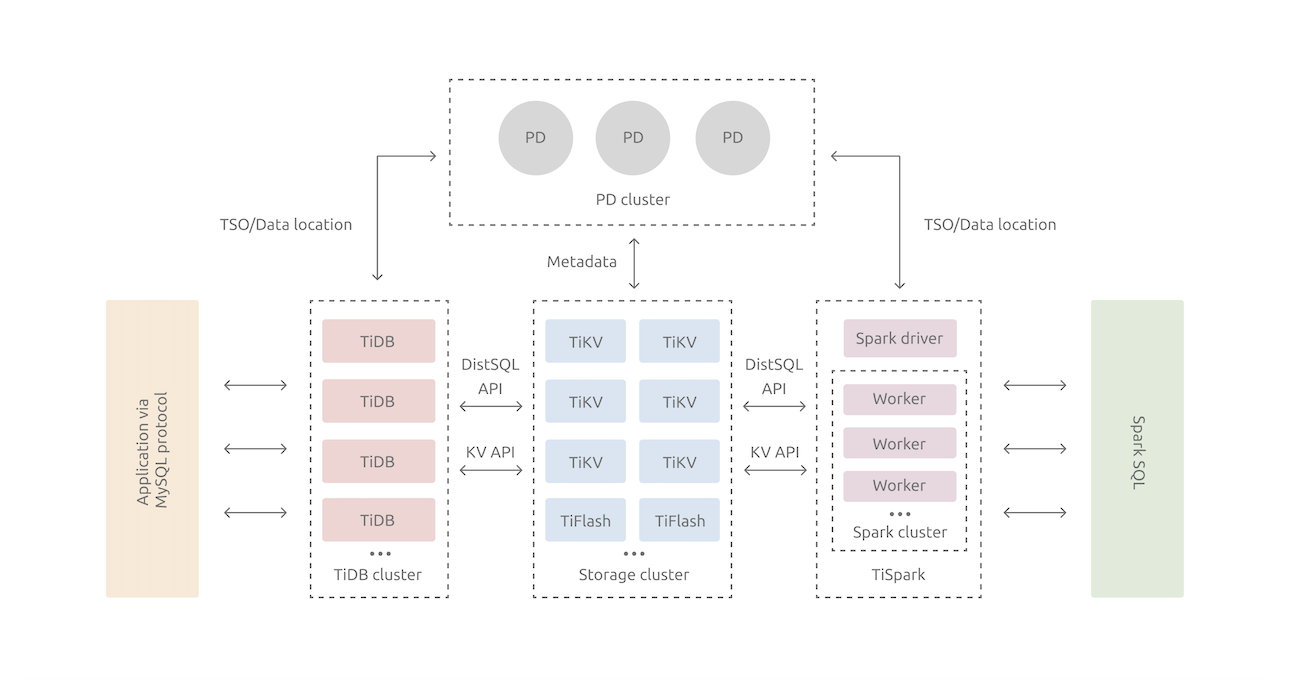 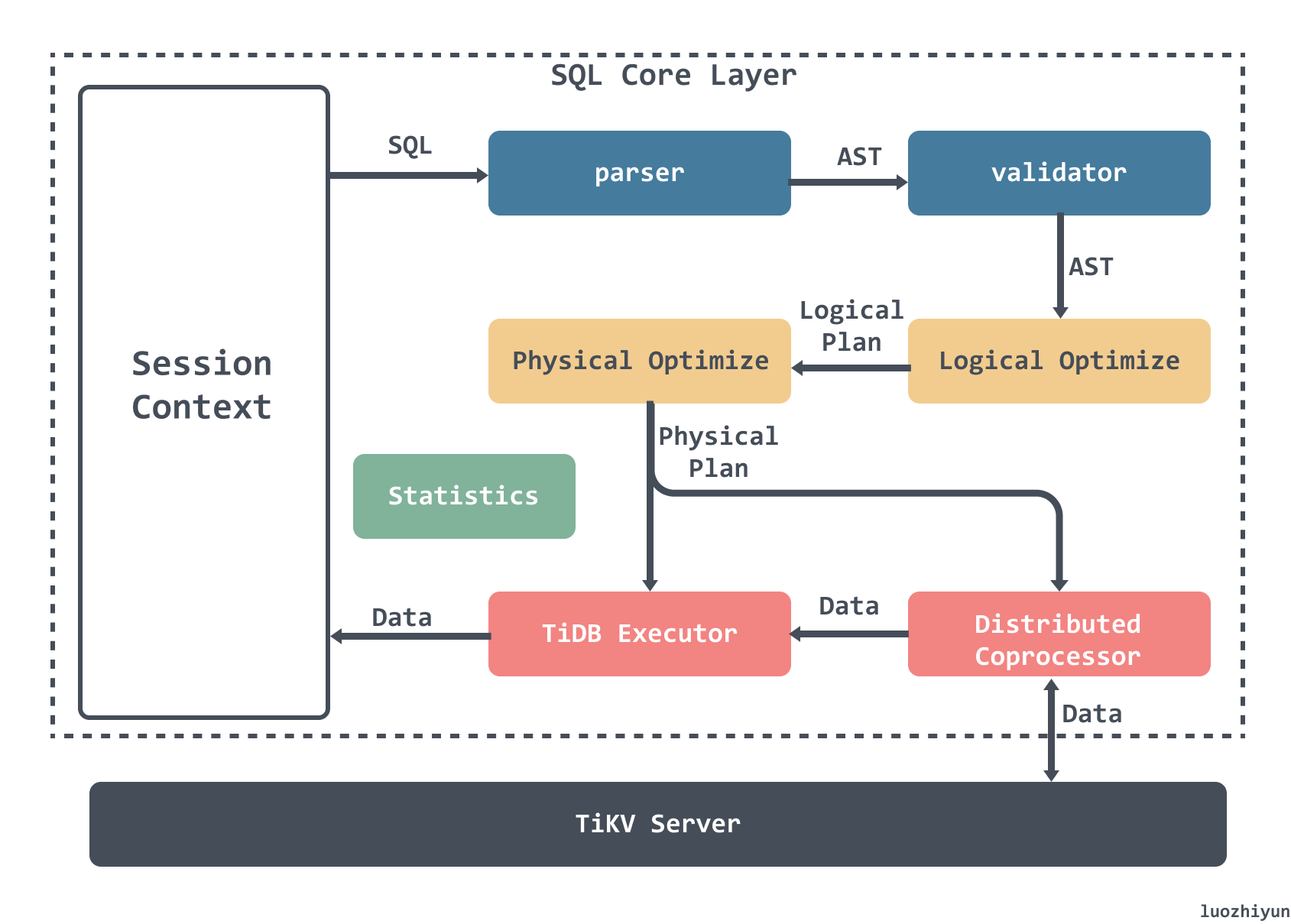 The whole SQL execution process consists of the following parts.

For example, the following SQL statement.

It is parsed to generate a syntax tree, which is then stored in the ast.StmtNode data structure.

Our execution plan will then be generated based on the ast syntax tree generated from this SQL. 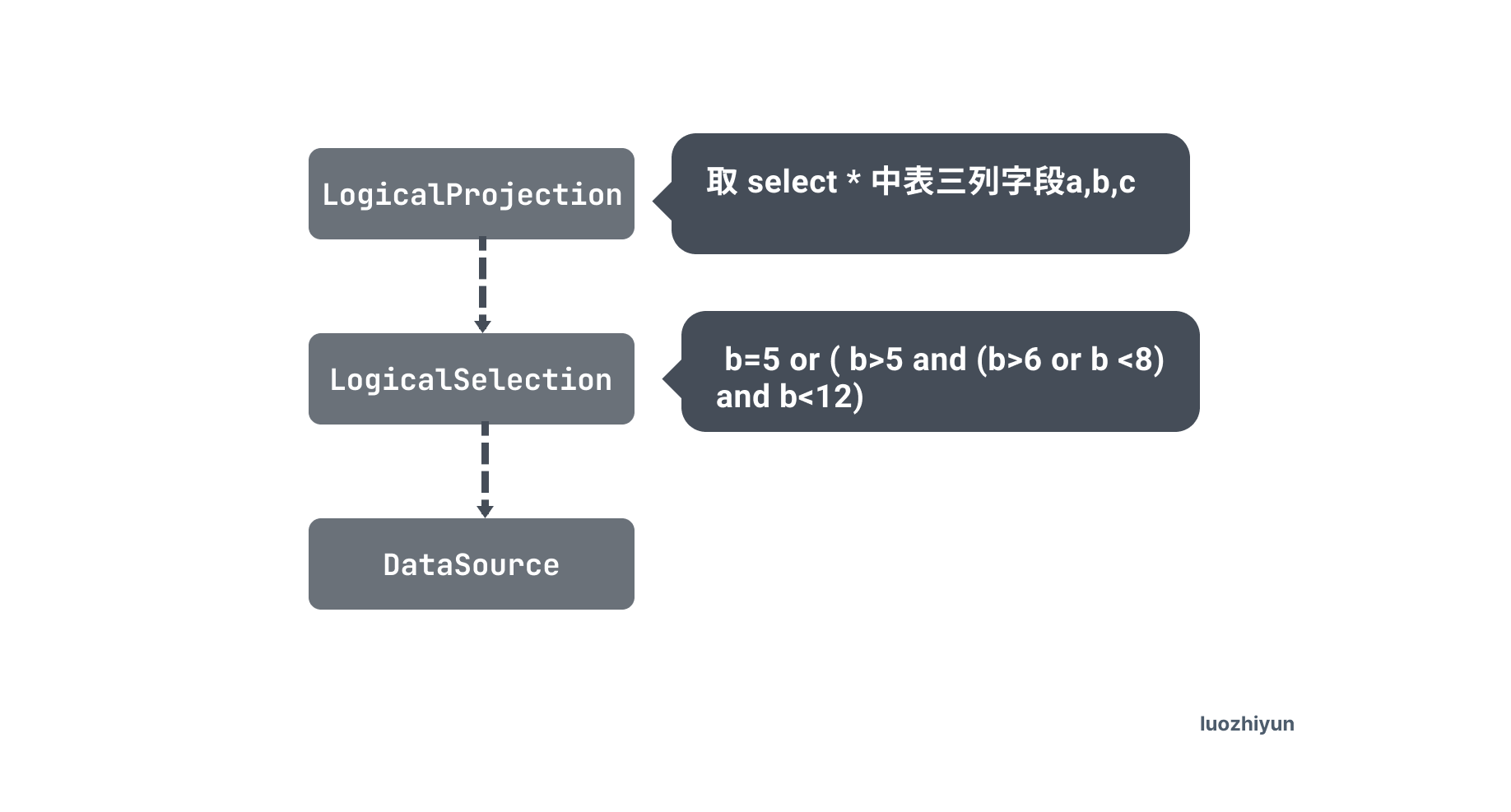 The execution plan consists of the following operators.

After the logicalOptimize logical optimization is executed, the execution plan becomes the following.

The basic idea of Predicate Push Down is to move the filter expression as close to the DataSource as possible so that irrelevant data can be skipped directly when it is actually executed. 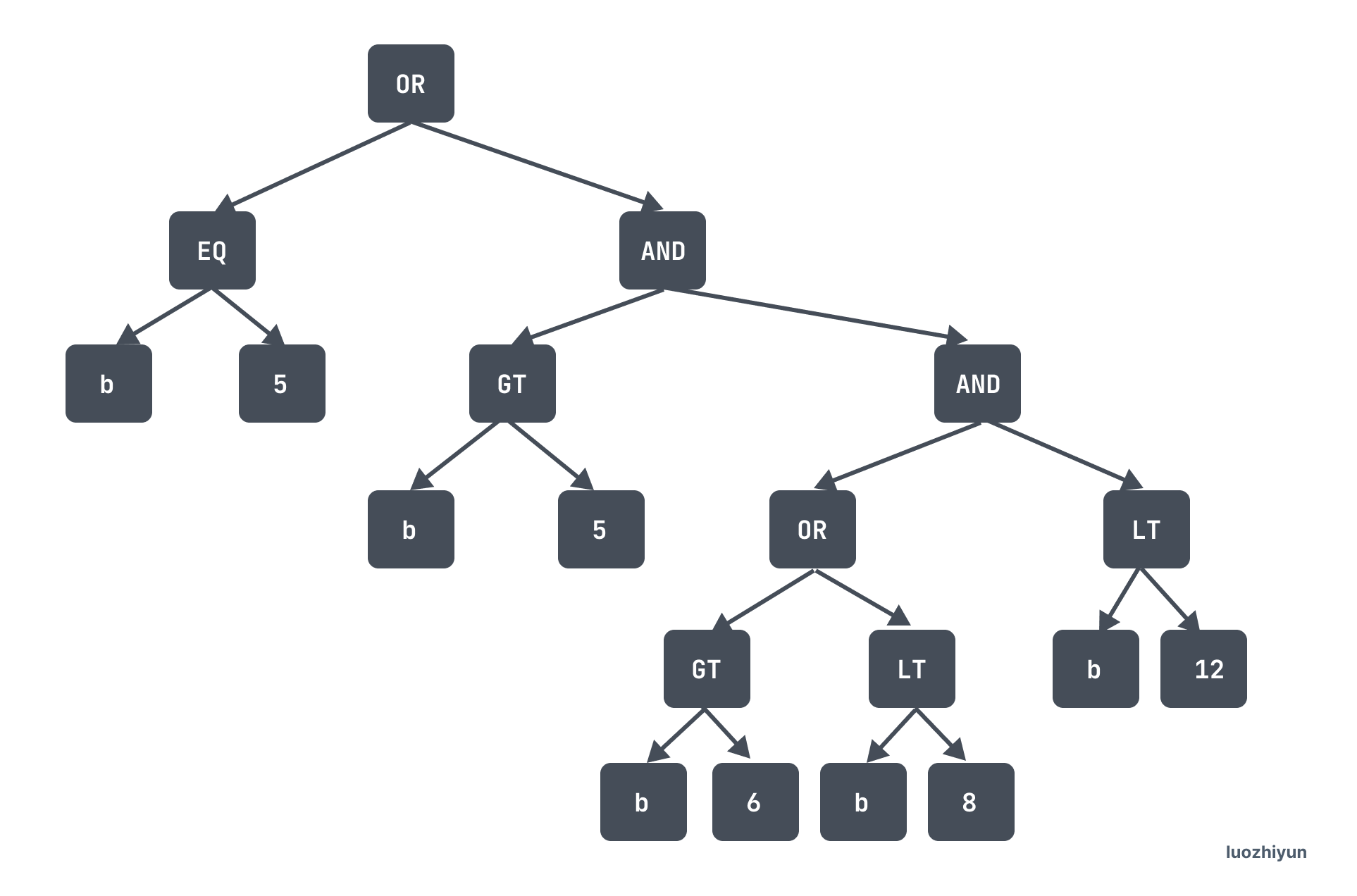 Because the index bottom is ordered, it is important to turn this tree into a scan interval.

Each row here is an optimizer, e.g. gcSubstituter for replacing expressions with virtual generated columns to facilitate the use of indexes; columnPruner for pruning columns, i.e. removing unused columns and avoiding reading them out to reduce data reads; aggregationEliminator for eliminating unneeded aggregation calculations when group by {unique key} to reduce the amount of calculations.

First, DetachCondAndBuildRangeForIndex is called to generate the scan interval, and this function recursively calls the following 2 functions.

The expression tree above eventually generates the interval: [5,12).

Then physicalOptimize recursively calls the findBestTask function for all operators, and finally calls the DataSoure operator to use the Skyline-Pruning index trimming, which gets the optimal execution plan from possibleAccessPaths. 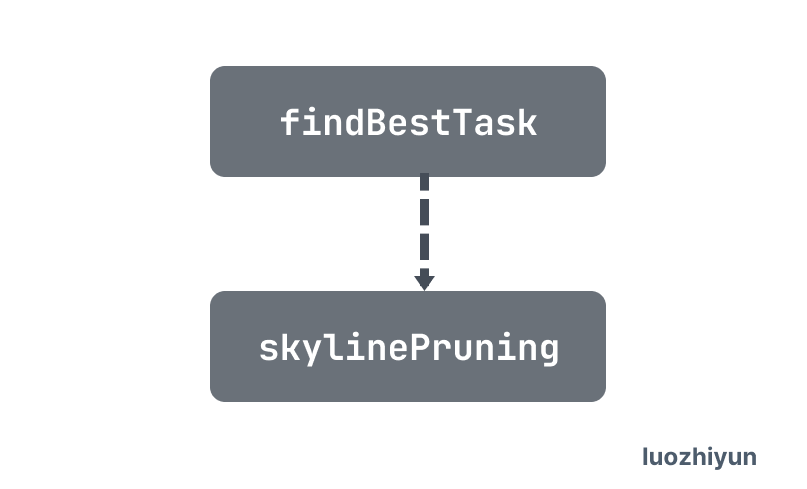 If an execution plan contains multiple indexes, then Skyline-Pruning determines the merit of an index by.

After using the Skyline-Pruning rule to exclude unsuitable indexes, the selection of indexes is based solely on cost estimation, and the cost estimation of read tables needs to consider the following aspects.

Based on these factors and the cost model, the optimizer selects an index with the lowest cost for table reads.

A structure called task is returned after the final execution, and TiDB’s optimizer will package the PhysicalPlan as a Task.

When Percolator stores one column of data, it stores multiple columns of data in the BigTable: the

If Prewrite is successful, proceed to Commit phase.

TiDB commit transactions are performed by calling the Commit method of KVTxn. Like the protocol described in the pecolator paper, this is a two-phase commit process, a Prewrite phase and a Commit phase.

When the Prewrite phase completes, it enters the Commit phase, where the current timestamp is commitTs and TSO ensures that commitTs > startTs.

TiDB initiates the second stage commit operation to TiKV where the Primary Key is located. After TiKV receives the commit operation, it checks the data legitimacy and cleans up the locks left in the prewrite stage.

TiDB’s storage layer is implemented by TiKV, which can be seen as a huge Map, that is, it stores Key-Value pairs, in which the Keys are arranged in the order of the total raw binary bits of the Byte array in comparison.

TiKV stores the data in RocksDB, and RocksDB is responsible for the specific data landing. However, RocksDB is a local storage solution, as a distributed storage, it needs to ensure that data will not be lost and error-free in case of single machine failure, so TiKV uses Raft to do data replication, each data change will be landed as a Raft log, and through Raft’s log replication function, data will be synchronized to most nodes of the Group safely and securely. 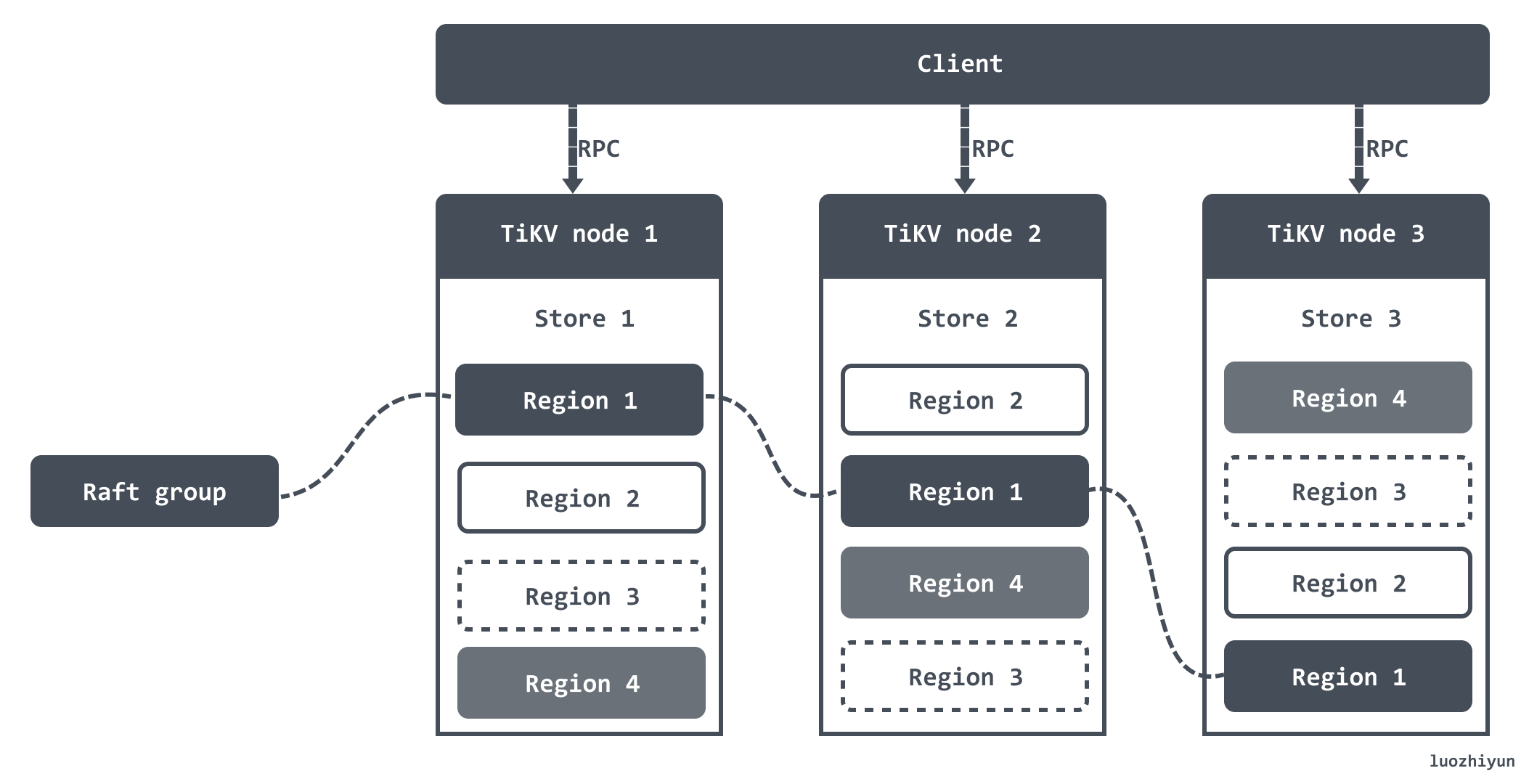 TiKV divides the entire Key-Value space into many segments, each segment is a series of consecutive Keys, we call each segment a Region, and we try to keep the data stored in each Region within a certain size. Each Region can be described by a left-closed-right-open interval like StartKey to EndKey. 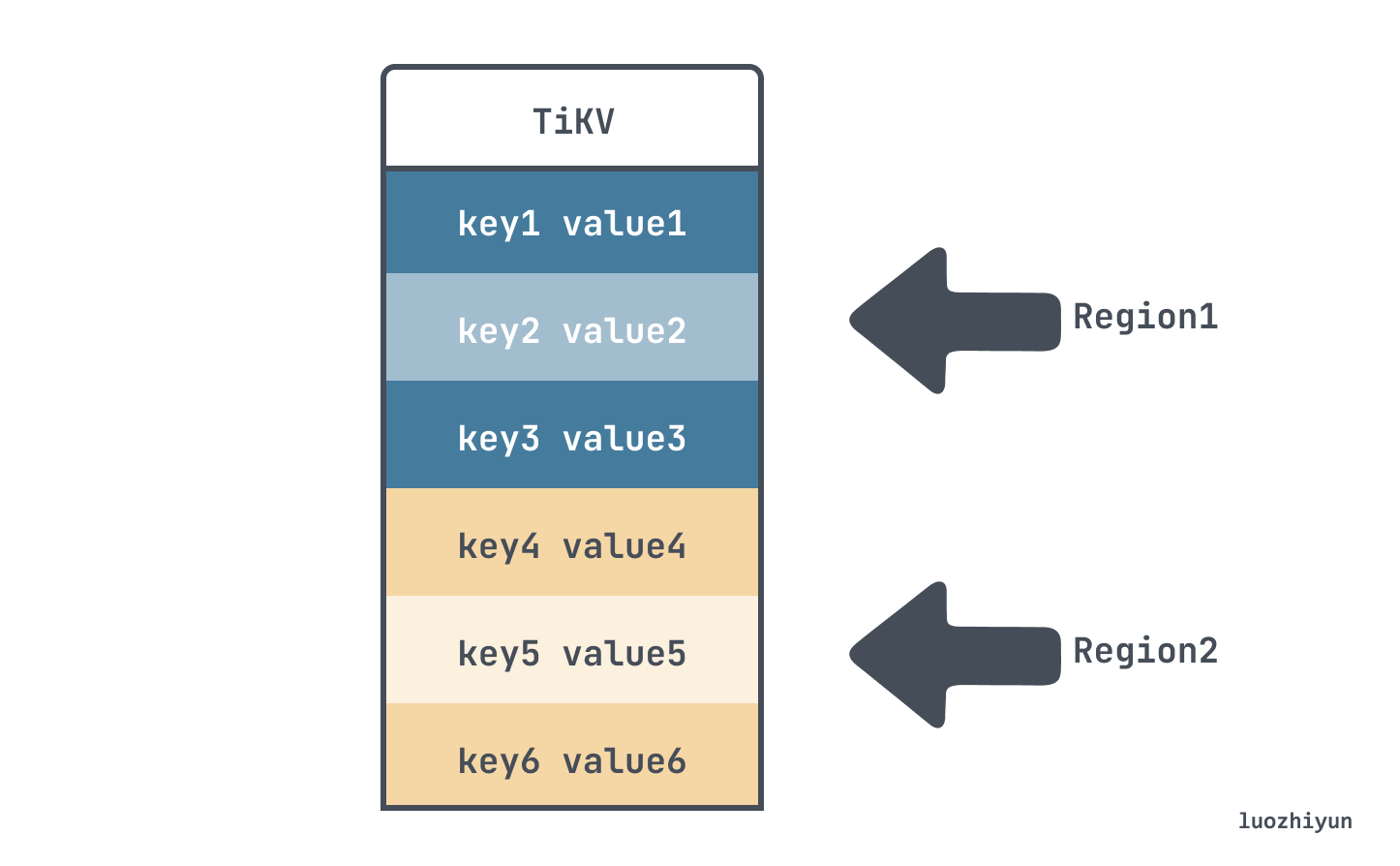 After dividing the data into Regions, we will spread the data across all the nodes in the cluster by Region, and try to ensure that the number of Regions served on each node is about the same, and then do the replication and membership management of Raft by Region.

The PD continuously collects information about the whole cluster through these two types of heartbeat messages, and then uses this information as the basis for decision making to generate a scheduling plan.

For example, if the PD finds that the number of replicas in a region does not meet the requirement through the heartbeat packet of a region leader, it needs to adjust the number of replicas through Add/Remove Replica operation. Then you can use this information to determine whether a node is offline or the administrator has adjusted the replica policy.

Since TiDB is stored via TiKV, but a table may have many columns in a relational database, it is necessary to map the data of each column in a row into a (Key, Value) key-value pair.

They are encoded into Key-Value pairs according to the following rules.

Unique Index data is encoded into Key-Value pairs according to the following rules.

A normal secondary index is encoded as a Key-Value pair according to the following rules.

There are three rows of data in the table.

For primary keys and unique indexes, the unique ID of the table and the RowID of the data in the table will be added to each entry, such as the three rows of data above.

For ordinary secondary indexes that do not need to satisfy the uniqueness constraint, a key value may correspond to multiple rows, and you need to query the corresponding RowID according to the key range. idxAge index in the above data will be mapped to.