First of all, let’s understand what is a timer task? Timers have very many scenarios, which you should encounter frequently in your normal work, such as generating monthly statistical reports, financial reconciliation, membership points settlement, email push, etc., are all scenarios of timer usage. Timers generally have three forms of performance: execution at a fixed period, execution after a certain delay, and execution at a specified time.

The essence of a timer is to design a data structure that can store and schedule a collection of tasks, and the closer the deadline, the higher the priority of the task. So how does a timer know if a task is due or not? A timer needs to be polled to check if a task is due every other time slice.

So the internal structure of a timer typically requires a task queue and an asynchronous polling thread, and can provide three basic operations.

Timer is a relatively early implementation of the JDK that allows for fixed-period tasks, as well as deferred tasks; Timer starts an asynchronous thread to execute a task when it is due, and the task can be scheduled only once, or repeated several times periodically. Let’s look at how the Timer is used, the example code is as follows.

We can see that the task is implemented by the TimerTask class, which is an abstract class that implements the Runnable interface, and the Timer is responsible for scheduling and executing the TimerTask.

The TimerThread starts a TimerThread asynchronous thread inside the Timer, which is always responsible for processing the tasks, no matter how many tasks are added to the array. If it is a periodic task, the deadline for the next task is recalculated and placed in the rootlet heap again; if it is a single task, it is removed from the TaskQueue at the end of execution.

DelayedQueue is a blocking queue in the JDK that can delay the fetching of objects and internally stores objects using a priority queue, PriorityQueue. DelayedQueue is used in the following way

The DelayQueue provides the put() and take() blocking methods to add objects to and take objects out of the queue. Once an object has been added to the DelayQueue, it is prioritised according to the compareTo() method. getDelay() is used to calculate the time left for the message to be delayed and the object can only be taken out of the DelayQueue if getDelay <= 0.

The most common scenario where DelayQueue is used in everyday development is to implement a retry mechanism. For example, if an interface call fails or a request times out, the current request object can be put into the DelayQueue, taken out via an asynchronous thread take() and retried. To limit the frequency of retries, you can set a maximum number of retries and set the object’s deadline using an exponential fallback algorithm, e.g. 2s, 4s, 8s, 16s …… and so on.

DelayQueue uses a priority queue to prioritise tasks and the time complexity of adding a Schedule and cancelling a Cancel operation is also O(logn).

The Timer described above is actually not recommended for users at the moment, it has a number of design flaws. 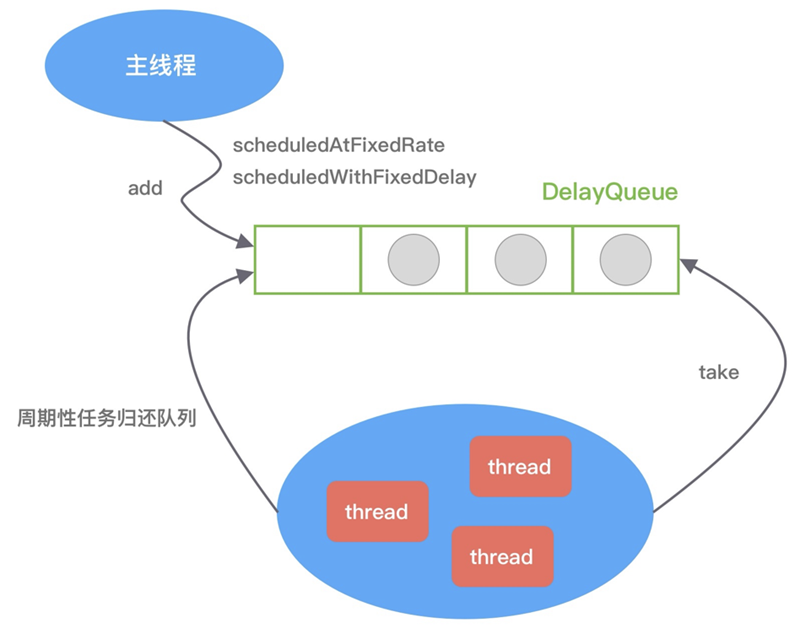 Above we have briefly described the three ways in which the JDK implements timers. We can say that their implementation ideas are very similar, all of them are inseparable from the three roles of task, task management and task scheduling. The time complexity of adding and removing tasks is O(nlog(n)), and all three timers will encounter serious performance bottlenecks in the face of massive task insertion and deletion scenarios. Therefore, for scenarios with high performance requirements, we generally use the time wheel algorithm.

The time wheel algorithm no longer uses the task queue as a data structure, which is shown in the following diagram (we will use the hour as a unit). 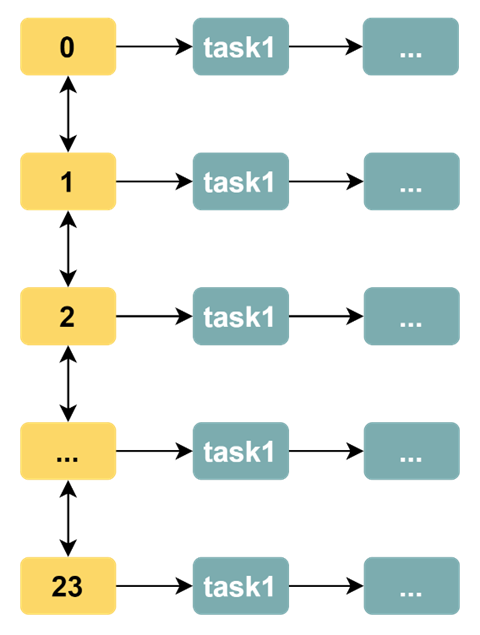 Obviously, the time-wheel algorithm solves the problem of inefficient traversal. In the time wheel algorithm, the polling thread always executes all the tasks in the task queue on the corresponding scale after it has traversed a time scale (usually by throwing the tasks to the asynchronous thread pool for processing), instead of traversing to check that the timestamps of all tasks are met.

Now, even if there are 10k tasks, the polling thread does not have to iterate over 10 k tasks per round, but only over 24 time scales.

A time wheel algorithm in hours is thus simply implemented. However, the hour as a unit of time is too granular and we sometimes want to base the time scale on minutes. The most straightforward way to do this is to increase the time scale so that each day has 24 * 60 = 1440. The data structure of the time wheel would then be as follows. 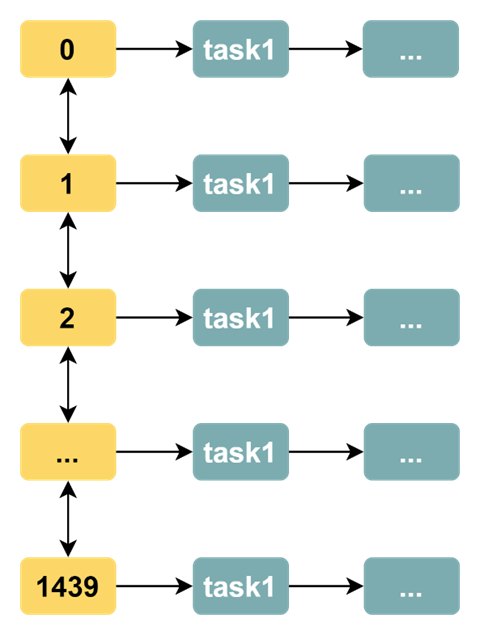 By adding a time scale, we can perform timed tasks based on finer units of time (minutes). However, this implementation has the following drawbacks.

If the time precision were to be set to seconds, then the entire time wheel would require 86,400 units of time ticks, at which point the traversal threads of the time wheel algorithm would encounter even greater operational inefficiencies.

The hierarchical time wheel algorithm has its counterpart model in life, that of the water meter: At this point, we have three time wheels at the second, minute and hour levels, each with 60, 60 and 24 scales respectively. 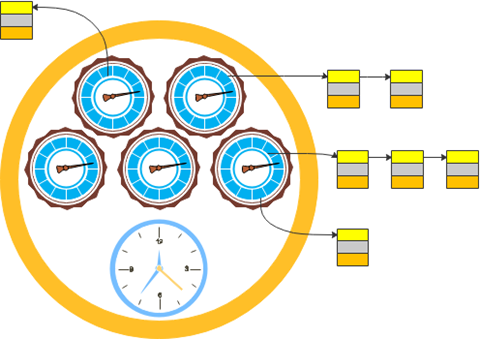 The layered time wheel is shown in the following diagram.

Suppose our task needs to be executed once a day at 7:30:20 seconds. The task is first added to tick 20 of the seconds clock wheel, and when its polling thread visits tick 20, it is transferred to tick 30 of the minutes clock wheel. When the minute level clock wheel thread visits tick 30, it transfers this task to tick 7 of the hour level clock wheel. When the 7th tick is accessed by the hourly clock wheel thread, the task is finally handed over to the asynchronous thread for execution, and then the task is registered again in the second-level time wheel.

The transfer of tasks from one time wheel to another in the hierarchical time wheel is similar to the way a turn of a small unit of a water meter causes a higher unit of the meter to advance one unit.

Since time wheels exist in components such as Netty, Akka, Quartz, ZooKeeper, Kafka, etc., a detailed explanation of the implementation and usage will not be given here.