A build system is an automated tool for generating target products from source code, including libraries, executables, generated scripts, etc. Build systems generally provide platform-related executables that can be triggered externally by executing commands, such as GUN Make, Ant, CMake, Gradle, etc. Gradle is a flexible and powerful open source Gradle is a flexible and powerful open source build system that provides cross-platform executables for external execution of Gradle builds via commands in a command line window, such as . /gradlew assemble command triggers a Gradle build task.

Modern mature IDEs integrate the required build systems, combine multiple command-line tools, encapsulate them into a set of automated build tools, and provide build view tools to improve developer productivity. In IntelliJ IDEA, it is possible to trigger the execution of Gradle tasks through the Gradle view tool, but it is not achieved by encapsulating command line tools, but by integrating the programming SDK - Gradle Tooling API specifically provided by Gradle, through which Gradle build capabilities can be embedded into the IDE or other tooling software.

Why does Gradle provide a Tooling API specifically for external integration calls, rather than just an executable-based command approach like other build systems? The Tooling API is a major extension to Gradle that provides more controlled and deeper build control than the command approach, allowing IDEs and other tools to be more easily and tightly integrated with Gradle’s capabilities. The Tooling API interface can return build results directly, eliminating the need to manually parse the log output of command-line programs as in the command method, and can run version-independently, meaning that the same version of the Tooling API can handle builds from different Gradle versions, while being both forward and backward compatible.

The key APIs are as follows. 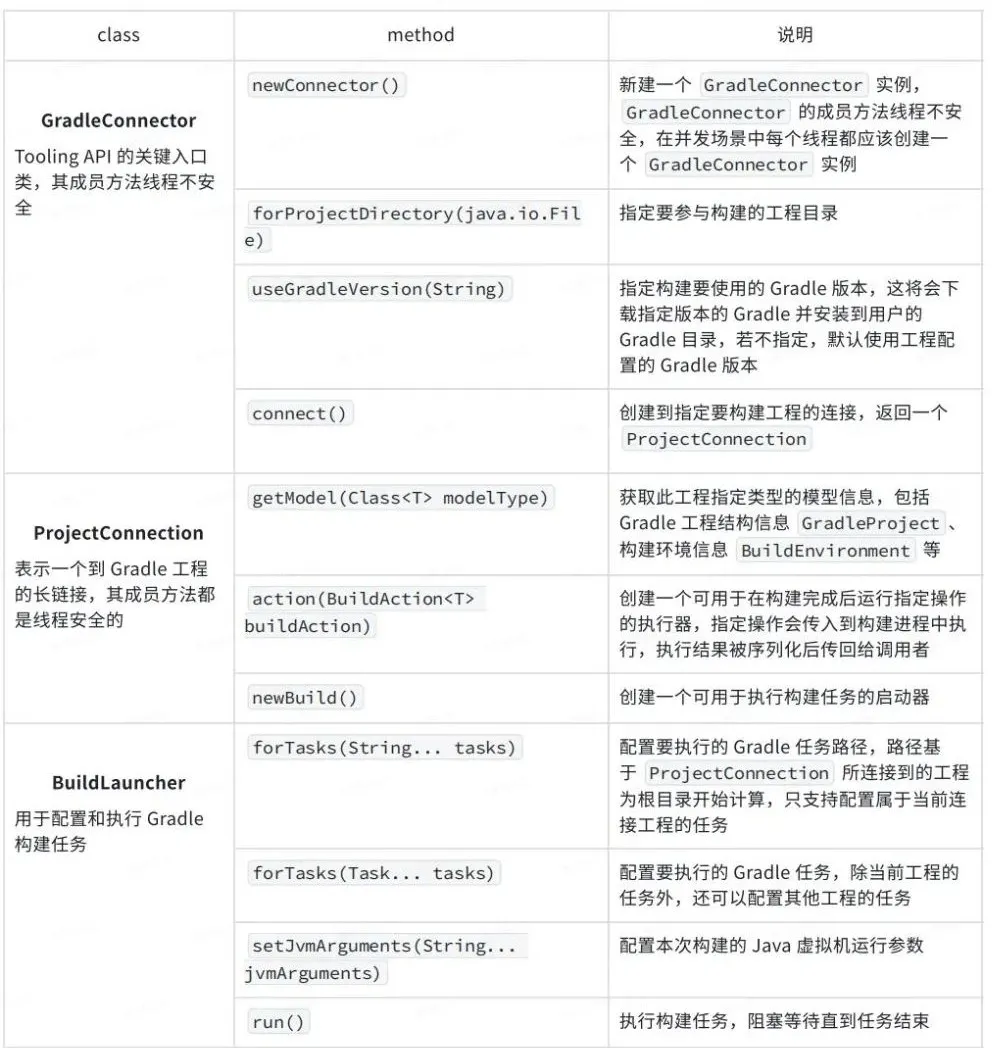 As introduced in the API above, we first create a connection ProjectConnection to a participating build project via the Tooling API entry class GradleConnector, and then get the structure information model GradleProject of this project via getModel(Class<T> modelType), which contains information about the project structure, project tasks, etc. that we want to query.

3.1 How to communicate with Gradle build process? 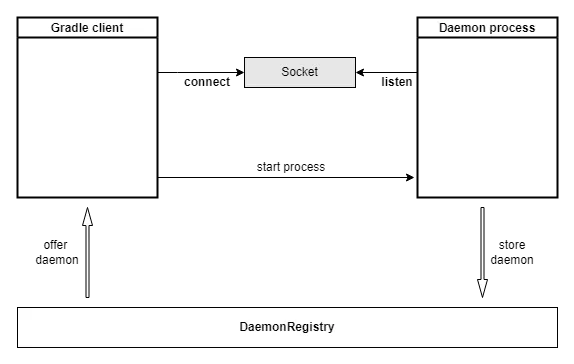 The Gradle daemon process is a long-standing Gradle build process that improves build speed by circumventing the build Gradle JVM environment and memory cache, and is always enabled for Gradle clients that integrate the Gradle Tooling API. In other words, a tooling application that has integrated the Gradle Tooling API will always communicate with the daemon process across processes to invoke Gradle build capabilities. If a Gradle client wants to connect to a dynamically created daemon process, it needs to register the daemon process and open it to queries through a service registration and service discovery mechanism, which is provided by DaemonRegistry.

The following is an analysis of the cross-process communication mechanism of the Gradle Tooling API from the source code perspective, taking the project structure information as the starting point.

Using the above daemon process lookup logic and related code, it can be concluded that.

When a Gradle client calls the Gradle build capability, it triggers the creation of a daemon process. The process entry function is in GradleDaemon.java, then it goes to DaemonMain.java to initialize the process, and finally in TcpIncomingConnector.java to open the Socket Server and bind to listen on a specified port.

The daemon process is then logged into the registry in DaemonRegistryUpdater.java.

In this way, Gradle client can get the compatible daemon process and its port in the registry, so as to establish a connection with the daemon process for communication, as shown in the figure below. 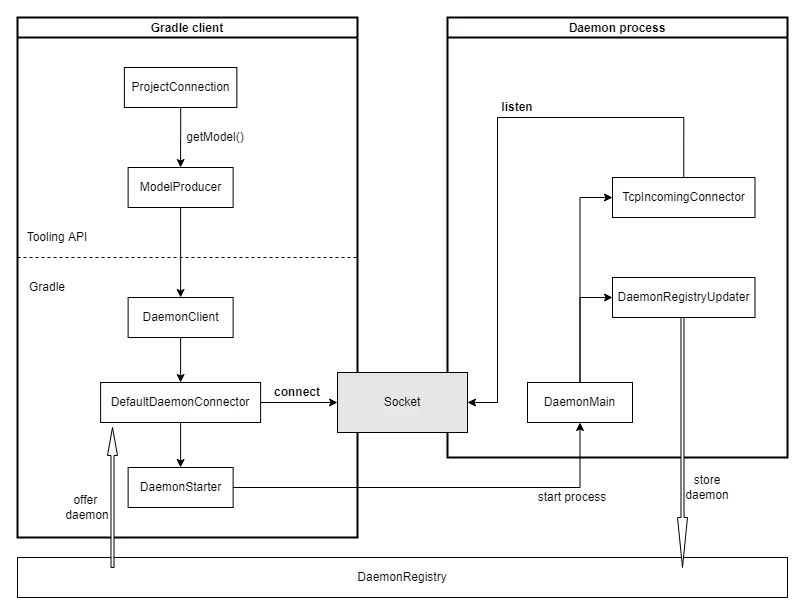 To summarize the process of establishing connection between Tooling API and Gradle Daemon process:

3.2 How to achieve forward and backward compatibility?

Tooling API supports Gradle 2.6 and higher, i.e. one version of Tooling API is forward and backward compatible with other versions of Gradle, and supports calling old or new versions of Gradle for Gradle building, but the interface functions included in Tooling API are not applicable to all Gradle versions; Gradle How is the compatibility between Gradle and Tooling API versions achieved? 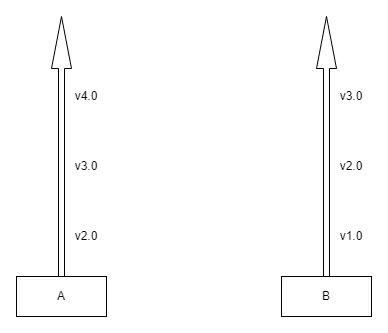 Think about a question: If we have two pieces of software: Main Software A and Tooling Software B dedicated to calling A, how can we achieve maximum and elegant version compatibility between A and B? Here is a deeper analysis of the Tooling API and Gradle source code to see what technical solutions Gradle has adopted in terms of version compatibility that are worthy of attention.

In the Gradle Tooling API source code repository, there is a flowchart that describes the chain of calls to get project information.

We will focus only on the DefaultConnection in the diagram - the key class for calls from the Tooling API to the Gradle launcher module.

It should be noted that although DefaultConnection is already a Gradle-side source, it is still part of the Gradle client-side process, i.e. a tooling program such as an IDE.

Before requesting the information model, Tooling API will determine in VersionDetails.java whether the model is supported by the Gradle version, and if so, it will send a request to the daemon process. daemon process will return the information model of the corresponding version, and then send a request to Tooling API’s ProtocolToModel. API’s ProtocolToModelAdapter.java will encapsulate a layer of dynamic proxy and finally return it as a Proxy.

The final Tooling API returns a GradleProject that is simply a dynamic proxy interface, as follows.

As you can see, even for the supported information models, some of the contents may not be supported due to Gradle version mismatch, and the call will throw UnsupportedMethodException exception.

However, this approach also brings a disadvantage, because the Tooling API side can only get the model information interface, not the real model entity class, then the subsequent serialization or delivery of the whole model information class, you need to do another layer of conversion, to construct a real entity class containing the content, Android sdktools library for the AndroidProject model, the real content of the entity class IdeAndroidProjectImpl constructed.

This article firstly introduces Gradle Tooling API from the combination of modern IDE and build system, and introduces its special significance to Gradle build system, then introduces its main functions through the specific API and call examples of Tooling API, and finally analyzes cross-process communication and version compatibility principle, which are two very important mechanisms in Tooling API, in conjunction with source code.

Through the analysis of Gradle Tooling API, we can have a deep understanding of the overall architecture of Tooling API, so that we can better develop Gradle-capable tooling software based on it, and we can also learn some methodologies in similar technical architecture scenarios: when you need to communicate with services dynamically created at program runtime, you can generally introduce As a tool program for external access, when similar programs only provide the command line approach, we should dare to break the rules and provide a new approach, so that we can empower other software to a greater extent and achieve a win-win situation for both sides.