Why don’t function components before react 16 have state?

As you know, function components did not have state before react 16, and component state could only be passed through props.

Compile App1 with babel, and App1 is a function component after compilation.

There is also no difference between the class component and the function component in terms of their data structures after rendering. 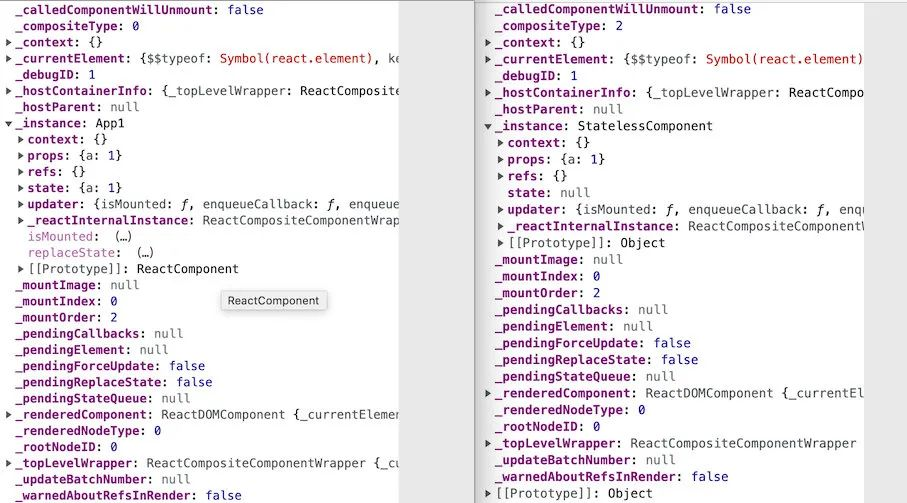 Why do function components have state after react 16?

As we all know, the biggest change made in react 16 is the fiber, and the data structure of the node (fiber node) has been changed significantly to fit the fiber. Modify the App component, render it on the page, and get the fiber node data structure as shown below. 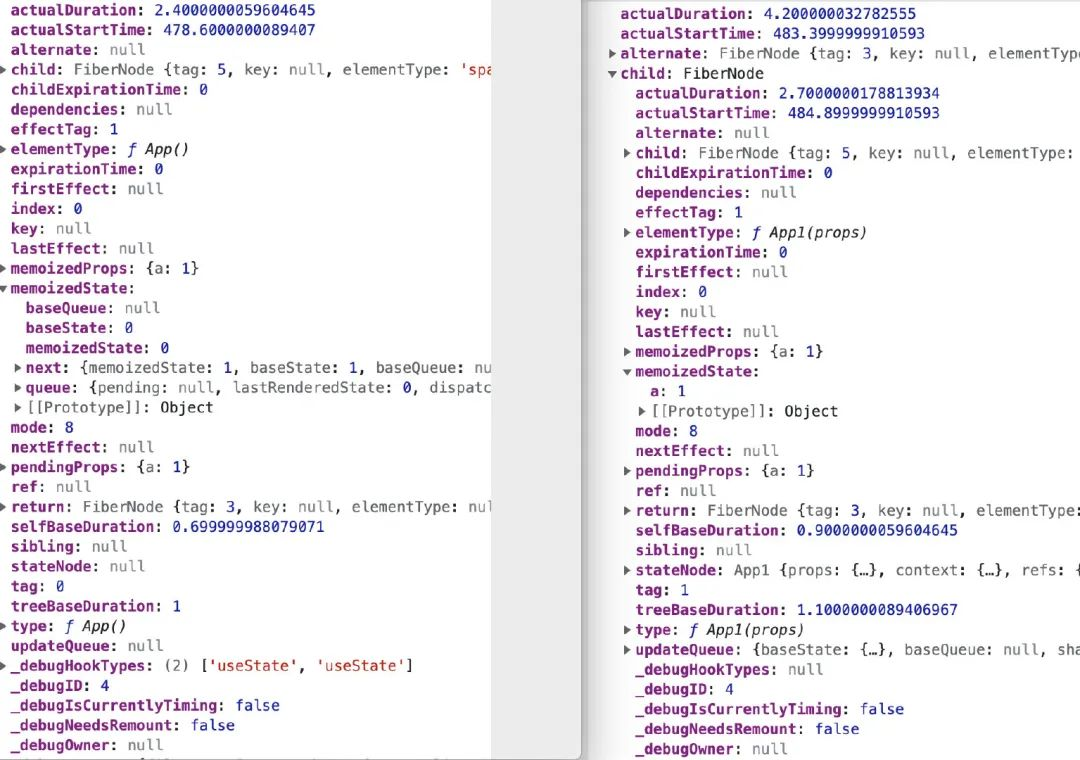 How does react know which component the current state belongs to?

All function component states are injected through useState, how do you identify the corresponding component?

A breakpoint in the render flow of react shows that function components have a special render method renderWithHooks. The method has 6 parameters: current, workInProgress, component, props, secondArg, nextRenderExpirationTime.

When executing renderWithHooks, the current fiber node is recorded with the variable currentlyRenderingFiber$1. So when the function component is executed, the useState method gets the state of the current node. The state is inserted into the memoizedState field of the corresponding node. The returned method that triggered the state change also knows which fiber node it is when the change is executed because of the closure. The corresponding source code is as follows.

renderWithHooks is only used for rendering function components.

What happens when the setA method is called? 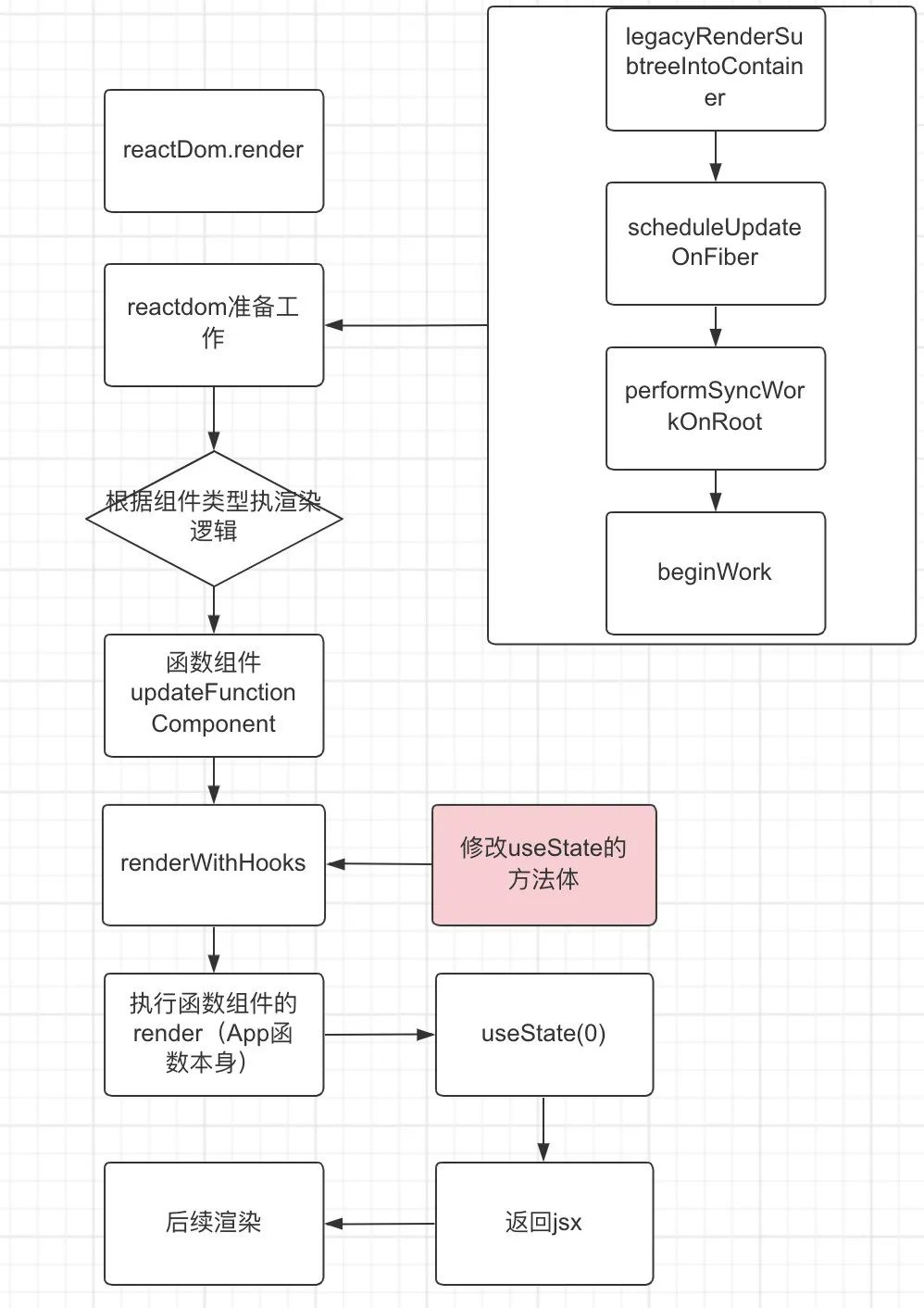 When useState is called, the currentlyRenderingFiber$1 is used to get the fiber node of the current component and mount the data to the memoizedState field on the node. This way the function component has a state.

useState also returns the corresponding state and a method to modify state. The method dispatchAction that modifies state is bound to the current fiber node, along with the action queue that updates the current state.

As you can see from the above code, when the setA method is called to update the component state, the data to be updated is generated, wrapped in a data structure and pushed to the queue in the state.

scheduleWork will trigger the react update, so that the component needs to be re-rendered. The overall process is basically the same as when it was first mounted, but the implementation of the mountState method body shows that the component is rendered using initialState. This is definitely problematic.

From this, we can infer that in the previous step, there must be an implementation method that indicates that the current component is not initially mounted and needs to be replaced with useState. The answer is found in renderWithHooks.

To make it easier to understand, there are two key pieces of data in react: current and workInProgress, which represent the fiber node rendered by the current page, and the fiber node that calculates the difference after the update is triggered. for rendering.

In the renderWithHooks method, the ReactCurrentDispatcher is modified, which results in a different method body corresponding to useState. The useState method call in HooksDispatcherOnUpdateInDEV is updateState. This method ignores initState and chooses to get the current state from the state of the fiber node.

At this point, it’s clear what react is doing internally by calling the setA method. setA inserts an update action into the queue of the current state and notifies react that there is a component state that needs to be updated. When updating, the method body of useState is different from the initial mounted method body, so when updating, it ignores the initState passed by useState, gets the initial data from the baseState of the node data, and executes the update action in the queue step by step until the queue is empty, or the queue is finished.

Why do function components sometimes get a state that is not real-time?

When the button is clicked within one second, no matter how many times it is clicked, the final page return will be 1. The reason: setTimeout closes the current state num, and when executing update state, the corresponding baseState has not been updated and is still old, i.e. 0, so multiple clicks will still be 0 + 1 = 1. The way to modify this is to change the argument passed in to a function, so that when react executes queue, the state value from the previous step is passed to the current function.

Why can’t useState be declared in a judgment statement?

Why does state need to be associated with a linked table?

I don’t have an answer to this question, but the only thing I can parse is: it’s for everything (pure) functions, right?

state is still an object, and is updated by calling a method. This way and the class component in turn remains unified and better understood.

By reading the source code to understand the execution of useState, we can deepen our understanding of the react function component state update. Feel free to point out any shortcomings or mistakes.