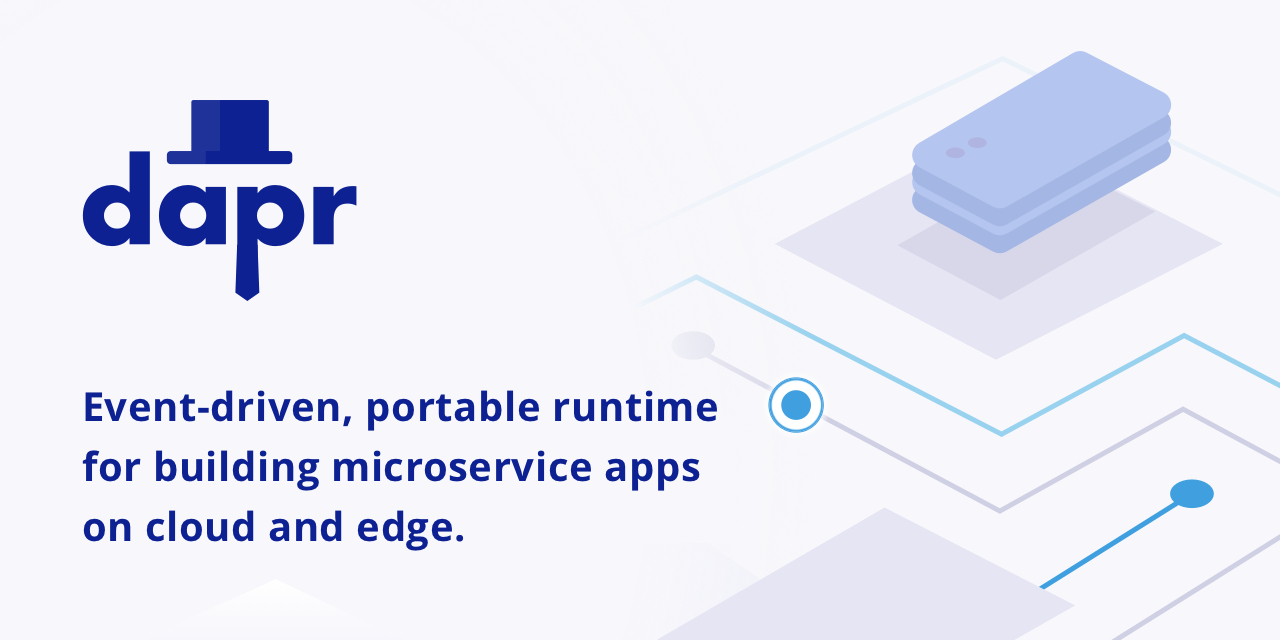 dapr, which I have been following for some time, has been officially released in v1.0 (in fact, v1.0.1 was updated when this article was published), which means that dapr has entered a stable state to some extent and can be tried in practice. As a project I’ve been following, I tried it out in the first place and tried to introduce it into a real project, and this article is some preliminary testing for that.

dapr was first open sourced by Microsoft, a portable, event-driven program runtime that makes it easy for any developer to build resilient, stateless/stateful applications running in the cloud and on the edge, with the flexibility to support multiple development languages. In other words, in my opinion, dapr can be seen and handled as a serverless landing solution for programs that are only concerned with the provided store and message queue interfaces and don’t need to care about more than the architectural level.

The dapr installation can be done with the official dapr-cli, which can be quickly installed with the one-click install command.

You can confirm that the dapr-cli program was installed successfully by entering the dapr command.

Next, use dapr-cli to install all runtime and other applications.

In the official documentation, if you choose to initialize with the init command, dapr-cli will automatically try to use the container environment to manage related programs, and will only choose to run locally if you add the -slim argument. See the dapr help init help for more information on usage. By default, program-related content is installed in the $HOME/.dapr directory, here I used the root user for simplicity, so the program command directory is /root/.dapr/bin, and the following commands are installed.

From the file name you can see that daprd is the deamon process, dashboard is the management panel, and placement is the tool used to manage the actor distribution scheme and key range. The official documentation mentions that Reids will be used as the default storage and pub/sub components after installation, but my actual installation is actually not there, I don’t know if the documentation is a bit out of date. If you start the program and try to save the data in the store according to the official documentation example, you will get an error.

But actually adding components is relatively easy in dapr, by adding the corresponding yaml file under $HOME/.dapr/components.

Adding Redis as a component

We can find a Redis component configuration template in the official documentation that It can be quickly used to.

Of course, we can also use the Redis Stream function to do pub/sub functions, although this function has been GA, but because of the characteristics of Redis Stream, you need to be careful with this function, here just because it is a demonstration so it does not matter.

Here we have defined a store called redis-store, so we need to modify the above command.

You can also get the content stored in Redis through redis-cli.

When we added Redis as storage, we also added Redis to support publish/subscribe functionality. Here you may need to write additional programs to implement it. Let’s use the official example here. There are two types of subscriptions in dapr, one is in the form of a yaml declaration component, and the other can be implemented by writing code. Of course, the first and second approaches have advantages and disadvantages, the former being more suitable for seamless integration and the latter for development control. Here, for the sake of intuitiveness, we directly use the code-writing approach.

Start the compiled daprdemo with the following command, note that you need to fill in the path when specifying the file name or in $PATH.

In the program startup log we can see that dapr tries to access some default endpoint to read possible configurations.

Next we try to use dapr-cli to send a message to the myapp we started earlier.

Of course, in addition to the pub/sub approach, we can also use the routing capabilities provided by dapr to make service calls directly.

Other component functions can be configured by referring to the description in the official documentation.

dapr is a powerful serverless runtime that, in addition to the above-mentioned message- and request-store-oriented features, can also control HTTP requests and gRPC requests of an application, etc. In addition to these features, service management is included, as well as observability support, making it a very promising runtime choice.