Consistent Hash is often used to alleviate the problem of large cache failures caused by scaling up and down nodes in distributed caching systems. Consistent Hash is more of a load balancing strategy than a Hash algorithm.

This paper will focus on the following points.

Caching problems due to cluster expansion and contraction

Let’s look at the traditional Hash-based load balancing and see what problems are encountered when the cluster is scaled up or down. 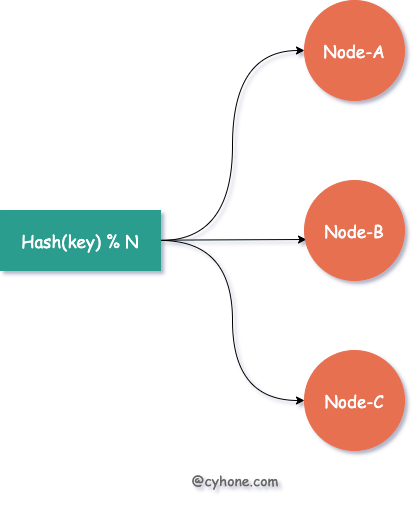 When we need to expand or reduce the capacity of the cluster, adding or reducing some server nodes will cause large cache failures.

For example, if we need to expand a server from 3 to 4 cache servers, then the previous policy of hash(username) % 3 will be changed to hash(username) % 4. The whole load balancing policy is completely changed and there is a risk of hash failure for any user.

And once the cache fails en masse, all requests cannot hit the cache, and the client requests directly to the back-end service, the system is likely to crash.

In response to the above problem, if we use Consistent Hash as a load balancing strategy for the caching system, we can effectively alleviate the cache failure problem caused by cluster expansion and contraction.

In contrast to the direct hash modulo the target Server, Consistent Hash uses ordered Hash ring to select the target cache Server, as shown in the following figure. 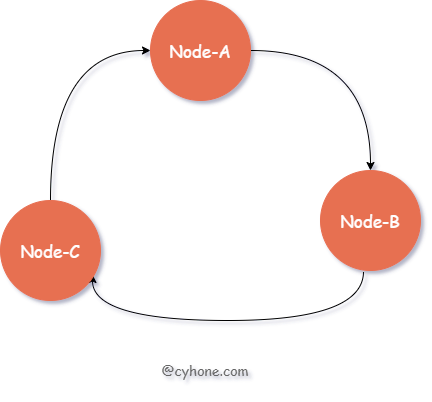 For this ordered Hash ring, each node in the ring corresponds to a cache server, and each node also contains an integer value. The nodes are ordered by that integer value from smallest to largest.

For a given user, we still first compute the hash value of the user name. Then, we search the Hash ring in order of value size, from smallest to largest, and find the first node that is greater than or equal to that hash value and use it as the target cache server.

For example, we have three nodes Node-A, Node-B, and Node-C in the hash ring with values of 3, 7, and 13, respectively, and assume that for a user, the hash value of his username is 9, and the first node in the ring greater than 9 is Node-C, then Node-C is chosen as the cache server for that user. Node-C

When we expand the cluster and add a new node New-Node, assuming the value of the node is 11, then the new ordered Hash ring is as follows. 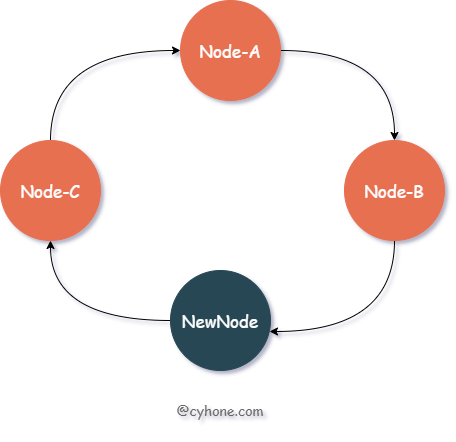 Let’s look at the cache invalidation scenario: in this case, only the data cache with hash values between Node-B and NewNode (i.e., (7, 11]) is invalidated. This data, which was assigned to node Node-C (value 13), now needs to be migrated to the new node NewNode.

Consistent Hash makes use of the ordered Hash ring to cleverly mitigate the cache invalidation problem caused by cluster expansion and contraction. Note that we say “mitigate” here; cache invalidation cannot be completely avoided, but its impact can be minimized.

A small problem here is that since an ordered Hash ring requires each node in it to have hold an integer value, how is this integer value obtained? The general approach is that we can use the node’s unique information to calculate its Hash value, such as hash(ip:port).

The above describes the basic process of consistent hash, so it seems that consistent hash is indeed effective as a means to mitigate cache failures.

But let’s consider a limiting case. Suppose there are only two cache nodes in the whole cluster: Node-A and Node-B. Then Node-B will hold data with a Hash value in the range (Node-A, Node-B]. And Node-A will take two parts of the data: hash < Node-A and hash > Node-B.

From this range of values, we can easily see that the value space of Node-A is actually much larger than that of Node-B. When the amount of data is large, Node-A will also carry much more data than Node-B. In fact, when there are too few nodes, it is easy to allocate far more data to one node than to others. This phenomenon we often call `Data Skew'.

For such problems, we can introduce the concept of virtual nodes, or replica nodes. Each real cache Server corresponds to multiple virtual nodes on the Hash ring. This is shown in the following figure. 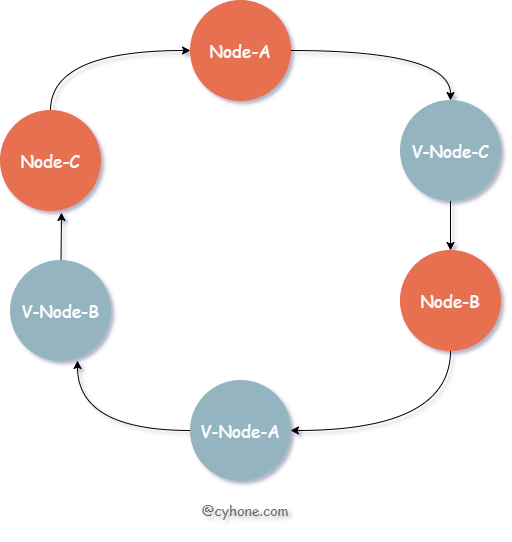 For the above diagram, we still have only three cache servers, but each server has a copy, e.g. V-Node-A and Node-A both correspond to the same cache server.

GroupCache provides a simple implementation of consistent hash. The code is available at github.com/golang/groupcache/consistenthash.

Let’s look at how it is used.

The Add function is used to add nodes to the Hash ring. Its source code is as follows.

There are two important properties involved in the Add function. 1:

In this function, there is an operation to generate virtual nodes. For example, if the user passes ["Node-A", "Node-B"] with replicas equal to 2, then Node-A will correspond to two virtual nodes in the Hash ring: 0Node-A, 1Node-A, and the values corresponding to these two nodes will be obtained by directly computing hash on them.

Note that the function will sort the keys at the end of each Add. So it is better to add all the nodes at once to avoid multiple sorting.

Next, we analyze the use of the Get function, which is used to assign the corresponding node to the specified key. The source code is as follows.

First calculate the hash value of the key passed by the user, and then use sort.Search to dichotomize in keys to get the smallest value in the array that satisfies the situation. Since keys is an ordered array, using dichotomous search can speed up the query.

If not found, then use the first element, this is the basic operation of the ring array. Finally, use hashMap[keys[idx]] to get the real node from the virtual node.