The rise of mobile and the popularity of OAuth2 has led to JWT being a hot mess these past few years. Today we are going to introduce another specification set, JOSE, called Javascript Object Signing and Encryption, which has a lot to do with JWT.

JOSE is a Javascript object signing and encryption protocol designed to provide a method for securely transmitting declarations (claims, such as authorization information) between communicating parties, purposely built on top of JSON and BASE64 for easy use in Web applications. The specification is still evolving, and we commonly use the following concepts defined by the RFC document:

JWT can be represented by JWS or JWE, I’ll cover this aspect in more detail later.

JSON Web Signature, content protected using digital signature techniques or message authentication code techniques (MAC) based on JSON data structures can be referred to as JWS. The cryptographic algorithms and identifiers used in this specification are defined in a separate specification JWA. The rules are more see RFC7515, here we just go through the serialization to get a feel for it.

This serialization is represented as a URL-safe, compact string. The format is.

JWT is usually this format.

This serialization is represented as a JSON object and comes in two formats. The general format is.

The tiled format is

As an example of a general format.

JWS only signs the claims to ensure that they are not tampered with, but the payload information is exposed. That is, JWS only guarantees the integrity of the data but not its non-disclosure. It is not suitable for passing sensitive data. JWE was created to solve this problem. The details can be seen in the following figure. 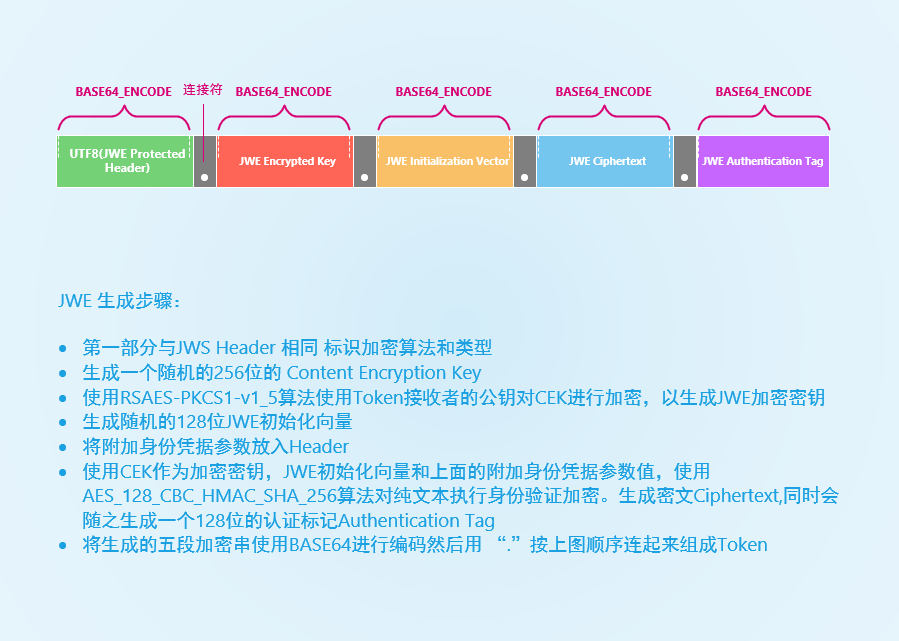 As you can see from the above JWE is very tedious to generate and may be resource and time consuming as a Token. It should be good to use as a secure data transfer path. As an example.

There are five parts in total, separated by four English periods.

Relationship of JWT to JWS and JWE

The following is a description of JWT from RFC7519.

Some conclusions can be drawn from the above.

In short, JWT is a JWS or JWE string that contains specific claims. Most of our common ones are JWS.

JWK is the most important point of knowledge in this article, which is important for us to learn about the Resource Server** later.

I believe Signing Public and Private Keys is not new to anyone. The JWT itself has to be signed with a private key to prevent information tampering, and the public key is used to send to the downstream consumer to verify the reliability of the JWT. Usually, the public key is configured in a static file integration, which has the disadvantage that when the upstream public and private keys are changed, the downstream cannot dynamically adapt the public key. This is the problem that JWK has to solve, with its canonical design of cryptographic algorithms and identifiers, and its compact JSON data structure is very easy to transfer between upstream and downstream.

JWK is a JSON object that represents the encryption key. The object contains a key name that must be unique, on top of which JWK can contain some custom fields. The following is a JWK representation of a P-256 EC (Elliptic Curve Discrete Cipher) key.

As defined in RFC7517, a JWK JSON object may contain the following attributes.

Depending on the algorithm JWK may also contain other properties.

A JWK Set represents a set of JWK with different kids, which is very easy to understand. It is also a JSON object, and the only key is keys. As an example.

The JWK Set URL in the > OAuth2 configuration is the endpoint to output the JWK Set.

The JWA specification specifies which algorithms can be used as cryptographic algorithms for JWS and JWE. It also specifies the alg properties in JWK corresponding to these algorithms, as well as the properties that specific algorithms include in JWK such as crv, x, y in the previous EC algorithm, which are not set in stone, they are adjusted based on the iteration of the algorithm. If you are interested in the details of JWA, see RFC7518.

You can generate JWK by yourself using some algorithms via the JWK generator to observe the differences between the different algorithms.

Today’s brief introduction to the JOSE specification is very helpful for you to learn about OAuth2 and OIDC related knowledge. It is not required to go deep but must understand the relevant knowledge.