There are seven primitive types and Object in js

number is a value in double-precision 64-bit binary format (-(253 -1) to 253 -1) based on the IEEE 754 standard. It does not give a specific type for integers. In addition to the ability to represent floating-point numbers, there are also signed values: +Infinity, -Infinity and NaN (Not-a-Number).

bigint can represent integers with arbitrary precision. When converting a bigint to a boolean, it behaves like a number. A bigint cannot be interchanged with a number. Otherwise, a TypeError will be thrown.

Both bigint and symbol are new to es2015 and are less commonly encountered. symbol can be simply but loosely analogized to the C enumeration type.

Please note the distinction between JavaScript string objects and basic string values. (This is also true for Boolean and Numbers.)

String literals (defined by single or double quotes) and strings that call the String method directly (without generating a string object instance by new) are both basic strings.

Object is a reference type. Most of the time assignments of reference types are shallow copies, such as this. To make a complete copy of an object, a deep copy is required (this is a topic for a separate article).

Functions are Object, arrays are Object, and can be simply but loosely interpreted as being Object except for the primitive type.

NaN is a special value, but in es2015, NaN is an attribute of Number. NaN is best used only to determine whether a variable is a number or not.

typeof can only detect primitive data types. Arrays, objects, and the like all return object. But null also returns object. But the function returns function.

I think the safest way to detect the type is Object.prototype.toString.call(variable)

A function can be understood as a variable. The type of a function is Object. A syntax error is raised when the function name and the variable name are the same.

Function’s prototype and __proto__ are equivalent.

Need to focus on these three attributes

When accessing an object’s properties, it looks for its own properties first, and if not, it looks up the prototype’s properties one level at a time. Attempts to access a property that does not exist for the object will traverse the entire prototype chain. 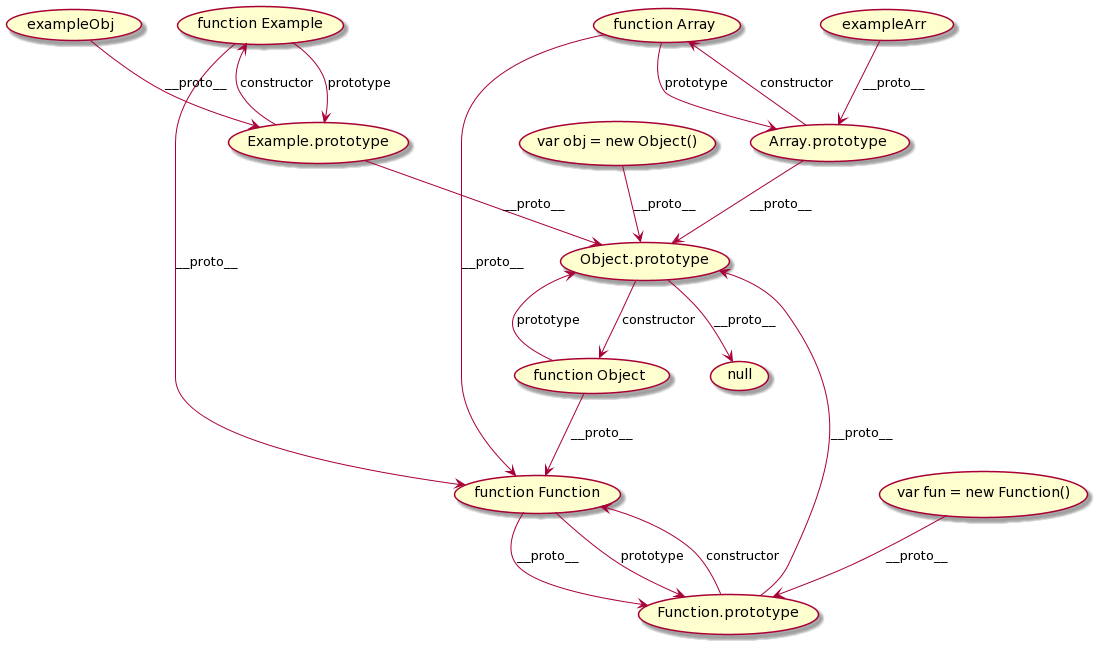 In this diagram, function Excemple is a custom function. function Array is a built-in function of js.

The difference between in and hasOwnProperty

__proto__ is a deprecated property https://developer.mozilla.org/zh-CN/docs/Web/JavaScript/Reference/Global_Objects/Object/proto

The standard is to use the Object.getPrototypeOf() method instead of __proto__.

A native prototype should not be extended unless it is intended to be compatible with new JavaScript features.

Object data output directly via console.log is always a little different than expected. This is probably why es2015 requires the Object.getPrototypeOf() method to get the object prototype instead of the __proto__ property.

js is a function-first programming language, where functions can be used as variables, parameters, and return values. js is also an object-oriented programming language, but unlike Java C++, js does not distinguish between classes and objects. js has only objects and uses a prototype chain approach to object inheritance.

The class is just syntactic sugar for the prototype chain.

In addition to prototype chains js has many syntactic pitfalls, such as this, closures, event loops, and IIFE.