It is the essence of an operating system to provide the ability to run programs. And in Linux, light and correspondingly fast process management is one of its good features. In this article, the focus is on the description, and life cycle of Linux processes.

A process is a program in execution and usually includes some resources, such as files, pending signals, internal kernel data, processor state, memory space, and one or more threads of execution. Therefore, a process can be considered as a collection of executable programs and computer resources.

In the Linux kernel, there is a two-way circular chain called a task list that is used to hold the process description (as will be discussed later, Linux threads are not distinguished from processes, and the task queue is also used to hold the thread description). Each element of the list is a structure of type task_struct (defined in linux/sched.h), task_struct is relatively large, about 1.7KB in size on a 32-bit machine, and contains data that completely describes an executing program: open files, address space, signals, status, etc. signals, status, etc.

Linux allocates the task_struct structure through the slab allocator. Prior to 2.6, the task_struct of each process was stored at the end of their kernel stack, which allowed hardware architectures with fewer registers, such as x86, to calculate its location simply by using the stack pointer. A thread_info (defined in asm/thread_info.h) is kept, which records basic information about the executing thread and keeps a pointer to the task_struct in the task field.

Linux allocates the task_struct structure through the slab allocator. Prior to 2.6, the task_struct of each process was stored at the end of their kernel stack, which allowed hardware architectures with fewer registers, such as x86, to calculate its location simply by using the stack pointer. A thread_info (defined in asm/thread_info.h) is kept, which records basic information about the executing thread and keeps a pointer to the task_struct in the task field. 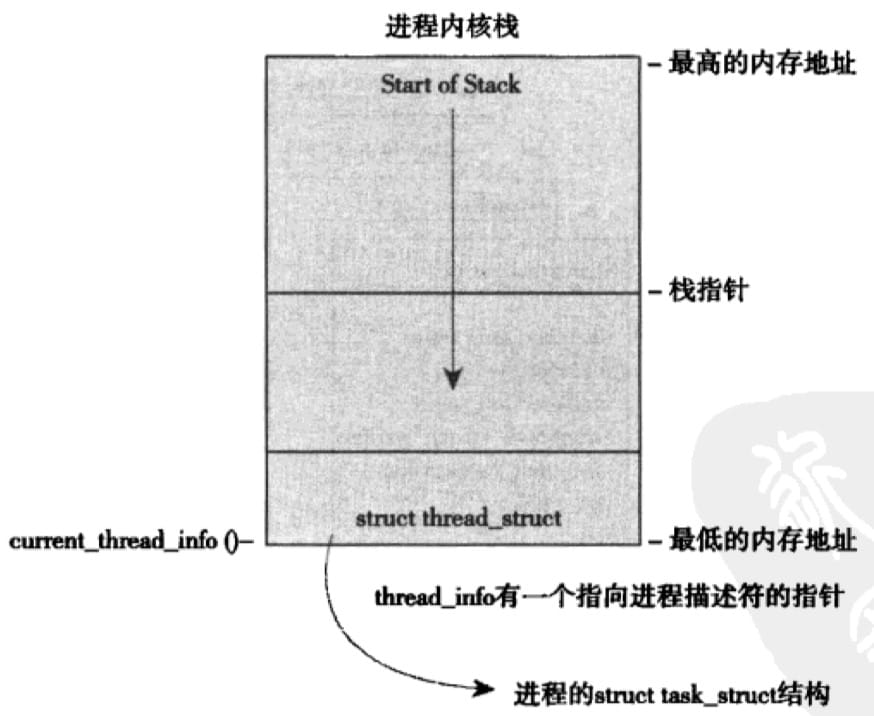 The kernel represents each process by a unique process identification value (PID), which is a macro of type pid_t, actually a short int (short type for compatibility, maximum value is only 32768), for how big the PID is It is actually limited by the definition in linux/threads.h and can be increased up to 4 million by modifying /proc/sys/kernel/pid_max. But considering that process descriptions are stored in a two-way circular chain table, fewer processes means a faster turn, and a huge number of processes does not mean a good thing.

The state of a process

In task_struct, state is used exclusively to describe the current state of a process, and every process in the system must be in one of the following five states.

The TASK_INTERRUPTIBLE state means that the process is dormant, perhaps because it is blocked, or waiting for certain conditions to be met.

TASK_UNINTERRUPTIBLE is similar to TASK_INTERRUPTIBLE, but the difference is that the process is not woken up or ready to run even if it receives a signal. A process in this state can be in an undisturbed state, waiting for certain conditions to be completed, such as at the beginning of the process creation, when it has not completed initialization.

__TASK_TRACED implies being tracked by other processes, e.g. by debugger processes.

__TASK_STOPPED means that the process has stopped execution, for example, when receiving SIGSTOP, SIGTSTP, SIGTTIN, SIGTTOU, etc. In addition, any signal received during the debugging period will enter this state. More on what happens when a process stops will be covered later. 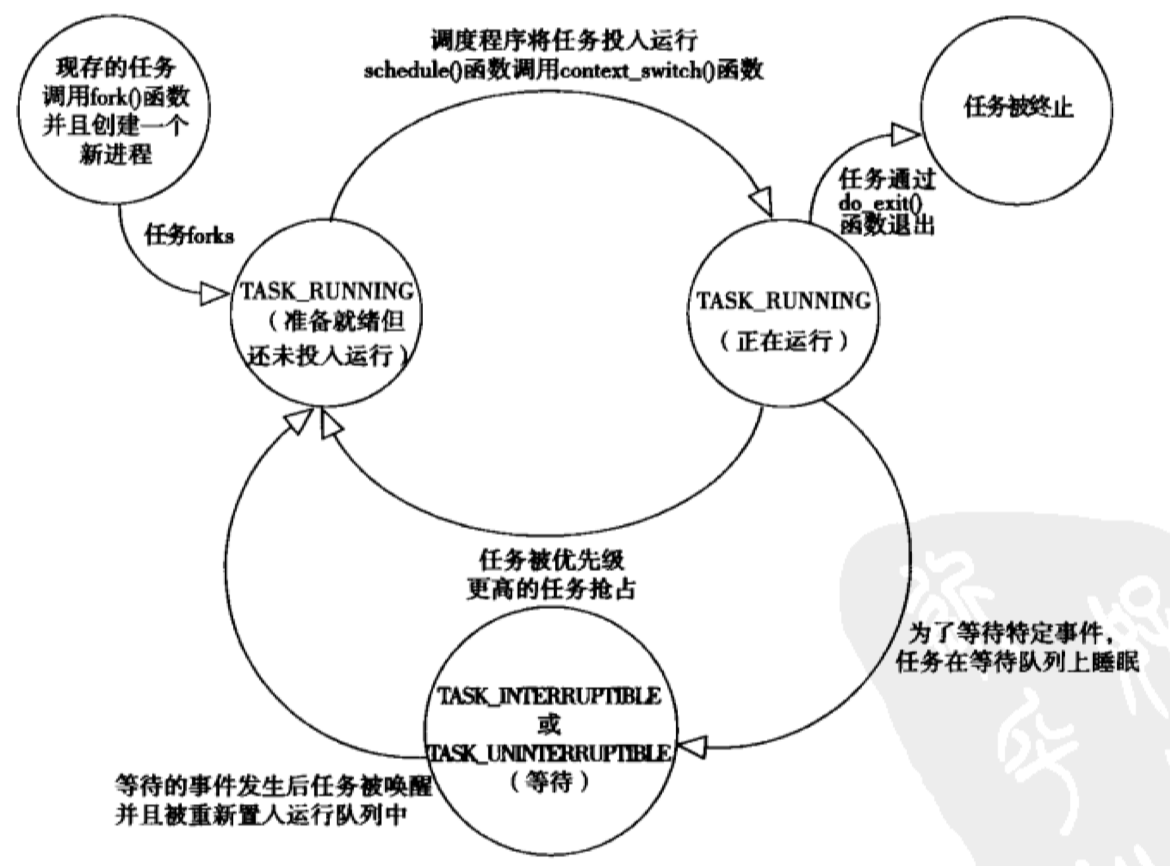 Generally programs execute in user space, but when a program executes a system call or triggers an exception, it falls into kernel space, at which point it is called the kernel “executing on behalf of the process” and is in process context. In general, on kernel exit, programs revert to user space to continue execution, and system calls and exception system calls and exception handlers are explicitly defined interfaces to the kernel through which processes can only fall into kernel execution, i.e., all accesses to the kernel must be through these interfaces. The system calls will be covered in a separate article later. 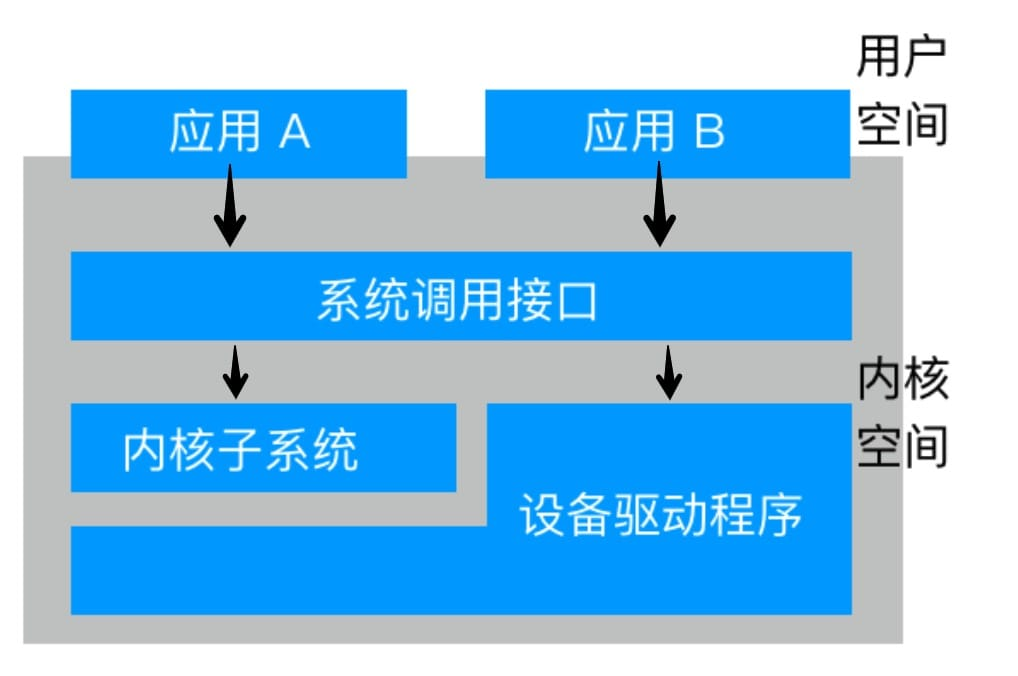 There is an obvious inheritance relationship between processes on Unix systems, as well as on Linux systems, where all processes are descendants of the init process with a PID of 1. The init process is the first process started at the end of the system boot process. This process is responsible for reading the system’s initialization script and executing other related programs to complete the final process of system booting.

Unix systems are unique in that all other systems provide a Spawn process mechanism that first creates a process in a new address space, reads in the executable, and ideally starts execution. This is an intuitive way to create processes, but Unix takes a different approach by splitting the process into two steps (into two separate functions), fork and exec.

Linux’s fork() is implemented using copy-on-wirte pages, which means that copying the data of the parent process can be deferred or even eliminated when creating a child process. Instead of copying the entire process address space at fork time, the kernel lets the parent and child processes share the same copy, and only when it is time to write, the data is copied, so that each process has its own copy. In other words, resources are copied only when they need to be written, until then, they are shared in a read-only manner. So the only real overhead of fork is copying the page table of the parent process and creating unique process descriptors for the child processes. Linux also does a clever optimization by running an executable immediately after the process is created, i.e. the child process is executed first, thus avoiding the parent process modifying the memory space and triggering a copy on write.

At this point, runtime returns to do_frok(), which checks the pointer returned by copy_process and puts the child process into operation, giving it priority over the parent process, as mentioned above. The creation of a child process is now complete.

The thread mechanism is an abstraction commonly used in modern programming technology that provides the same set of threads running in a shared memory address space within the same program. These threads can also share other resources such as open files, but as mentioned above, there is no concept of threads from the Linux kernel’s point of view, which is related to the Linux threads implementation.

Therefore, the implementation of threads in Linux is very different from that of other operating systems such as Windows, which provide a dedicated mechanism for supporting threads in the kernel (these systems often refer to threads as lightweight processes). The phrase “lightweight processes” is itself an expression of how Linux differs from other systems. Whereas in other systems threads are abstracted as a unit of execution that consumes fewer resources and runs faster than heavy processes, in Linux processes themselves are lightweight enough and threads are simply a means of sharing resources between processes.

Therefore, threads are also created by the clone() system call, except that some arguments are passed to the clone() call to mark the resources to be shared.

When a process (thread) terminates, the kernel must release the resources it occupies and inform its parent process, and these two steps complete the resource release and deletion of the process descriptor.

The wait() family of functions is implemented by the unique system call wait4(), which implements a process that hangs itself until one of its children exits, at which point the function returns the PID of that child process. in addition, the pointer provided when the function is called contains the exit code of the child when it exits.

When it is finally time to release the process descriptor, release_task() will be called and perform the following tasks.

At this point, the process descriptors and process exclusive resources are all freed.

If the parent process exits before the child process does, there must be a mechanism to ensure that the child process finds a new father, otherwise these orphaned processes will be frozen forever on exit. The system iterates through the other processes in the thread group where the process is located to find a foster father, and if there are no other processes in the thread group, he is hung up on the init process.

Once the system has successfully found and set up a new parent for the process, there is no risk of a resident dead process, and the init process will routinely call wait() to check on its children and remove any dead processes associated with it.

Processes are a very basic and critical abstraction that lies at the heart of every modern operating system. This article describes the basic concept of processes and their lifecycle by introducing them, and the next article will describe what they look like when they are running by introducing their scheduling.