mmap is a very common system call in user space, whether it is allocating memory, reading and writing large files, linking dynamic library files, or sharing memory between multiple processes. This article first introduces the process address space and mmap, then analyzes the kernel code to understand its implementation, and finally deepens the understanding of mmap with a simple demo driver example.

As a pre-knowledge, let’s start with a brief introduction to process address space to better understand what follows. Modern operating systems cannot manage memory without hardware support, such as segmentation mechanisms and paging mechanisms. They are used for memory isolation, protection and efficient use. The address space between processes is isolated from each other, and each process has a set of page tables that implement the conversion from linear to physical addresses. 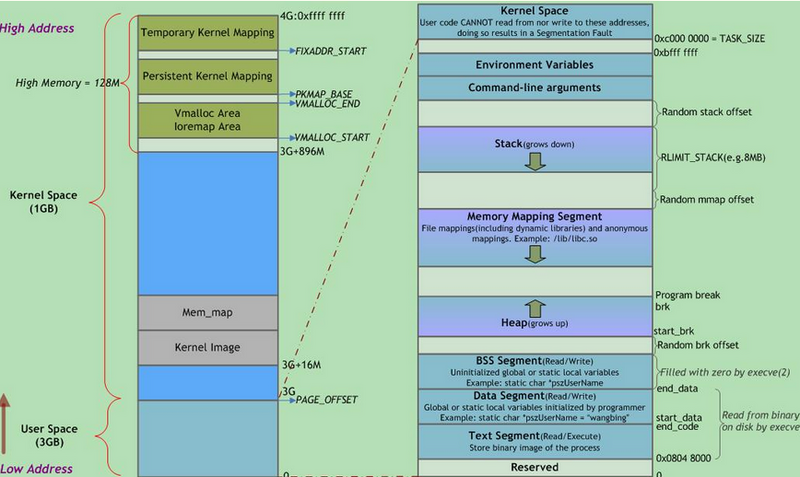 In 64-bit processors, there is no need for high-end memory as a management area since there is enough kernel space to map physical memory linearly. More detailed information can be found in the kernel documentation.

Process address spaces are described in the Linux kernel using struct vm_area_struct, or VMA for short. Since these address spaces are attributed to individual user processes, they have corresponding members in the struct mm_struct of the user process. Processes can dynamically add or remove these memory areas through the kernel’s memory management mechanism.

Each memory area has associated permissions, such as readable, writable, and executable. If a process accesses a memory area that is not in the valid range, or if it accesses memory illegally, then the processor will report a missing page exception, or in severe cases, a segment error.

Depending on the different combinations of prot and flags, there are 4 types of mappings as follows.

When we call mmap in user space, we first enter the kernel space through a system call, and we can see that here the offset is converted to a page-based unit.

Look at the system call sys_mmap_pgoff, if it is not an anonymous map, it will get the file structure via fd.

Then look at the vm_mmap_pgoff function, which mainly uses a semaphore to do a protection of the process address space, then according to the value of populate will prefault the page table, and if it is a file map then it will preread the file.

Let’s look at the do_mmap implementation.

This function mainly aligns the mapped length pages, checks and processes the prot attribute and flags flags, and sets the vm_flags. The get_unmapped_area function checks the specified address or automatically selects an available virtual address. Then mmap_region is called, and you can see that after returning, populate is set according to the flags set when the interface was called. If MAP_LOCKED is set, or if MAP_POPULATE is set but MAP_NONBLOCK is not, then the prefault operation mentioned earlier is performed.

This function first does some address space checks, then vma_merge checks if it can be merged with the old mapping, then it allocates the vma and initializes it. If it’s a file map, call call_mmap; if it’s an anonymous shared map, call shmem_zero_setup, which does /dev/zero file-related setup.

If it is a file in a normal file system, we take ext4 as an example, which mainly sets vma->vm_ops to ext4_file_vm_ops.

Later when this vma address space is accessed, the corresponding operation function is called to handle it, for example, the page error handling function will call ext4_filemap_fault, which in turn will call filemap_fault.

If it is a device file, the corresponding device driver implements the mmap method to establish the mapping from the device physical memory to the vma address space inside. The next step is to demonstrate this with a simple driver demo.

We wrote a simple misc device, using alloc_pages to allocate the physical memory of the device (4 pages) when the driver is loaded, but of course you can also use kmalloc or vmalloc. Then we implemented several operation methods, the main one is the mmap method, and for testing purposes we also implemented read, write, and The main method is the mmap method, in order to facilitate testing we also implemented read, write, llseek and other methods.

ps: driver and test program code has been uploaded to github, catbro666/mmap-driver-demo

Let’s look at the implementation of the mmap method. The core function is remap_pfn_range, which is used to create a mapping of actual physical addresses to vma virtual addresses. The first one is the user space vma to be mapped, the second one is the starting address of the mapping, the third one is the physical page frame number of the kernel memory, the fourth one is the size of the mapped area, and the fifth one is the page protection flag for this mapping.

Most of the parameters we use are obtained through vma, and as seen in the previous section, the outer function has already done the vma initialization. Since we are allocating memory with alloc_pages, whose physical addresses are contiguous, the mapping is also relatively simple.

Let’s look at the implementation of the read method, which mainly copies data from the device memory to the buf in user space and then updates the file offset. The write method is similar, so we won’t show it here.

Next, we wrote several test programs to test this driver. First of all, we open the driver device file /dev/demo_dev, and then mmap the size of 1 page, here we sleep 5 seconds before and after respectively, in order to provide observation time. Then we performed a read and write test with the mapped user space virtual address to verify that mmap was mapped correctly. First write by virtual address, followed by read with read for comparison check. Then write by write, followed by read with virtual address for comparison check.

We compile and run the test program and the result is as we expected. From the kernel log, we can see that the mapping starts at physical address 0x5b1558000 with an offset of 0. The vma size is 1 page, and the mapping size is also 1 page. The kernel space virtual address 0xffff8d1ab1558000 is mapped to user space 0x7f21c0f58000.

Meanwhile, we use pmap to observe the address space of the process before and after mmap.

You can see that after mmap there is an additional segment called demo_dev, whose starting address is the user space address 0x7f21c0f58000 that we mapped.

Test program 2 is not very different, it opens the same device file, mmap creates the same mapping, and then reads the contents written by the previous program via read and virtual address respectively.

Compiled and run, the test results are as we expected. The same kernel virtual address is now mapped to a different user space virtual address. With mmap we have implemented inter-process communication.

This time let’s test some special cases, the size of the mapping is changed to 1 byte, according to the previous code analysis, the mapping needs page alignment, so it is expected to actually map a page. It is possible to read and write normally in the range of one page. Then try to write outside the vma mapping range, and expect a segment error.

We compiled and ran the tests and the results were as we expected, actually mapping 1 page in size, with a segment error (SIGSEGV) when trying to write beyond the mapped range.

This time we modified the mmap parameters again, this time mapping 2 pages in size, with the offset set to 3 pages. Since the physical memory size allocated for our device is 4 pages, the mapped page 2 has exceeded the actual physical memory of the device. It is expected that the first page of the mapping can be read and written normally, and the second page will have a bus error.

Compile and run the test program and the result is as expected. Although the size of vma is 2 pages, only 1 page of physical memory is actually mapped, and a bus error (SIGBUS) occurs when trying to write to the second page.