Before transactional messages were available, the highest level of messaging assurance supported in Pulsar was to ensure that a Producer’s messages were saved exactly once on a single partition through the Broker’s message de-duplication mechanism. When a Producer fails to send a message, the Broker ensures that the message is persisted only once, even if it retries sending the message. However, in the Partitioned Topic scenario, the Producer has no way to guarantee message atomicity across multiple partitions.

Similarly, Pulsar Functions are only guaranteed to process a single message on an idempotent function once, i.e., the business needs to guarantee idempotency. It cannot guarantee that processing multiple messages or outputting multiple results will only happen once.

Therefore, Pulsar needs transactional mechanisms to guarantee exact-once semantics (Exactly-once), where both production and consumption are guaranteed to be exact-once, without duplication and without data loss, even in the case of Broker downtime or Function processing failure.

Let’s take the Function scenario at the beginning of this section as an example to demonstrate the scenario of production and consumption in the same transaction.

First, we need to enable transactions in broker.conf.

Let’s take the Function example at the beginning of this subsection.

When no transaction is enabled, if Function writes the result to SinkTopic first, but the message acknowledgement fails (Step-4 below fails), this causes the message to be recast (Step-1 below), and Function will recalculate a result and send it to SinkTopic again, so that a piece of data is recalculated and recast twice.

If the transaction is turned on, all the previous steps will be rolled back as long as there is no commit at the end, and the produced messages and confirmed messages are rolled back, so that the whole process can be started again without double calculation and data loss. The entire timing diagram is shown below. 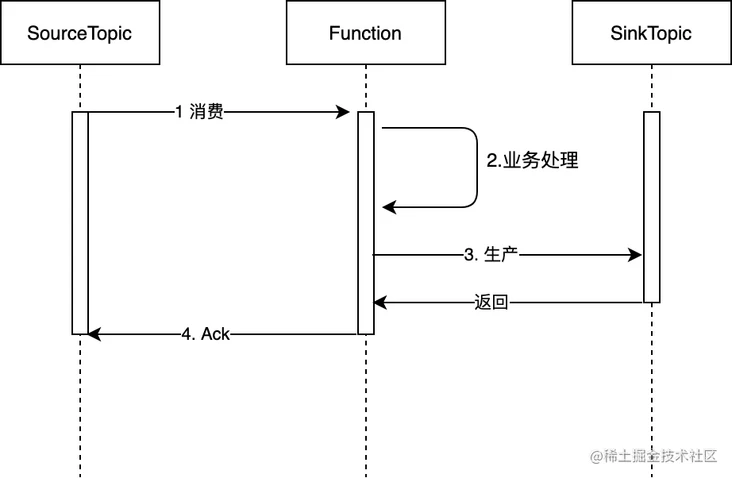 We just need to follow the steps above and understand exactly what each step does to get a clear picture of how the whole transaction is implemented. In the following subsections, we will go through it step by step.

Before understanding the whole transaction flow, we introduce the components of transactions in Pulsar, which are commonly found in distributed transactions, such as TC, TM, RM, etc.

In the following, we introduce the entire transaction flow with a Producer, the gray part in the diagram represents the storage, and there are two existing storage implementations, in-memory and Bookkeeper. 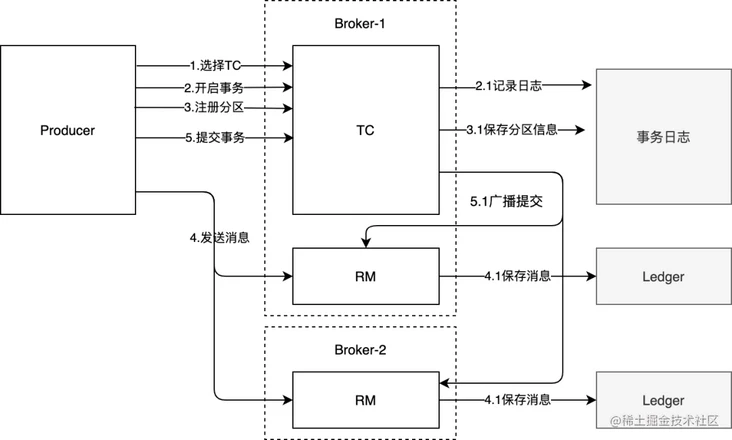 How are the messages in Setp-4 guaranteed to persist into the Topic and not be visible?

A maxReadPosition property is stored in each Topic to identify the maximum position that can be read by the current Consumer. When the transaction has not been committed yet, the maxReadPosition will not change although the data has been persisted to the Topic. Therefore, the Consumer cannot consume the uncommitted data.

The message has been persisted and finally the transaction has to be rolled back, how to handle this part of data?

What happens if the transaction is partially successful and partially unsuccessful when it is finally committed?

There is a timing object called TransactionOpRetryTimer in TC, all transactions that are not all successfully broadcast are given to it to retry until all nodes are finally all successful or exceed the retry count. So won’t there be consistency problems with this process? First let’s think about what the scenario is when this happens. Usually some Broker nodes are down causing these nodes to be unavailable or network jitter causing temporary unreachability. In Pulsar, if a Broker is down, the Topic attribution is transferred, and unless the entire cluster is unavailable, a new Broker can always be found and resolved by retrying. In the process of Topic attribution transfer, maxReadPosition is not changed, and consumers cannot consume messages. Even if the whole cluster is unavailable, Timer will still let the transaction commit by retrying when the cluster is subsequently restored.

Will it block the consumption of normal messages if the transaction is not completed?.

Yes. Suppose we open a transaction, send a few transaction messages, but do not commit or roll back the transaction. At this point, if we continue to send ordinary messages to the Topic, the maxReadPosition will not change because the transaction messages have not been committed, and the consumer will not consume the new messages and will block the consumption of ordinary messages. This is the expected behavior, in order to ensure the order of messages. And different Topics will not affect each other, because each Topic has its own maxReadPosition.

We can divide the implementation of the transaction into five parts: environment, TC, producer RM, consumer RM, and client. Since the management of production and consumer resources is separate, we will introduce them separately.

The setup of the transaction coordinator needs to start from the initialization of the Pulsar cluster. We have described how to build the cluster in Chapter 1, and the first time you need to execute a command to initialize the cluster metadata in ZooKeeper. At this point, Pulsar will automatically create a SystemNamespace and a Topic in it, the full Topic is shown below.

This is a PartitionedTopic with 16 partitions by default, each partition is a separate TC. we can set the number of TCs with the –initial-num-transaction-coordinators parameter.

Since online environments usually use persistent transactions, the following principles are based on persistent implementations.

All transaction-related services are initialized when the BrokerService is started, and each Partition is a Topic in the TC Topic, and the TransactionMetadataStoreService, when initialized, restores the previously persisted metadata from the The TransactionMetadataStoreService restores the previously persisted metadata from Bookkeeper during initialization. Each TC will save the following metadata.

If we set enableTransaction=true when initializing PulsarClient, an additional TransactionCoordinatorClient will be initialized when the Client is initialized. Since the TC Tenant, Namespace and Topic names are fixed, the TC client can discover all the Partition information through Lookup and cache it locally, and then when the Client creates a transaction, it will poll to select the TC to be used for the next transaction from this cache list.

Next we will open a transaction.

In the above code, a newTxn is sent to a TC and a Transaction object is obtained.

When a transaction is opened, TransactionCoordinatorClient selects a TC from the cache and sends a newTxn command to the Broker where the selected TC is located, the structure of the command is defined as follows.

Since the TCID is included in the command, there is no problem even if multiple TCs are managed by the same Broker, which will find the corresponding TC and process the request based on the TCID.

Before sending a message, the Producer sends an AddPartitionToTxn command to the Broker, and only after it succeeds will it continue to send the real message. After the transaction message reaches the Broker, it is passed to the TransactionBuffer for processing. After passing the checks, the data will be saved in the TransactionBuffer, which is just a proxy (it will save some metadata), and it will eventually call the original Topic to save the message. constructor needs to pass in the original Topic object. We can think of TransactionBuffer as an RM on the Producer side.

The TransactionBuffer stores two kinds of information, one is the original message, which is stored directly using the Topic. The other is a snapshot, which stores the Topic name, the maximum readable position information (to avoid Consumers reading uncommitted data), and the list of transactions that have been aborted in that Topic.

The TransactionBuffer receives the message and writes an abortMarker directly to the original Topic to mark that the transaction has been aborted, and then updates the list in memory. abortMarker is also an ordinary message, but the metadata in the message header is different from the ordinary message. is also a normal message, but the metadata in the message header is not the same as in a normal message. This data is stored in the snapshot, mainly for fast data recovery after a Broker restart. If the snapshot data is lost, TopicTransactionBufferRecover reads all the data in the Topic from end to end, and updates the break list in memory for each abortMarker encountered. If a snapshot is available, we only need to read from the beginning at the snapshot to recover the data.

The consumer needs to bring the transaction object with it when the message is acknowledged, identifying the use of transaction Ack.

All message acknowledgements with transactions turned on do not directly modify the MarkDeleted location on the cursor, but are first persisted to an additional Ledger, a copy of which is also cached in the Broker’s memory. This Ledger is managed by the pendingAckStore, which we can think of as the Consumer RM’s log.

All transactions commit and rollback, as the Client side informs the TC, or as the timeout TC automatically senses. the TC’s log stores which Partitions the Producer’s messages are to be sent to, and also which Partitions the Consumer will Ack. the RM is scattered on each Broker and records the messages sent throughout the transaction and the messages to be acknowledged. When the transaction ends, TC finds all the metadata with TCID as the key, knows which RMs on the Brokers need to be notified through the metadata, and finally launches a broadcast to notify RMs on these Brokers that the transaction needs to be committed/rolled back.

Next, let’s take a look at the server-side transaction component, as shown in the following figure.