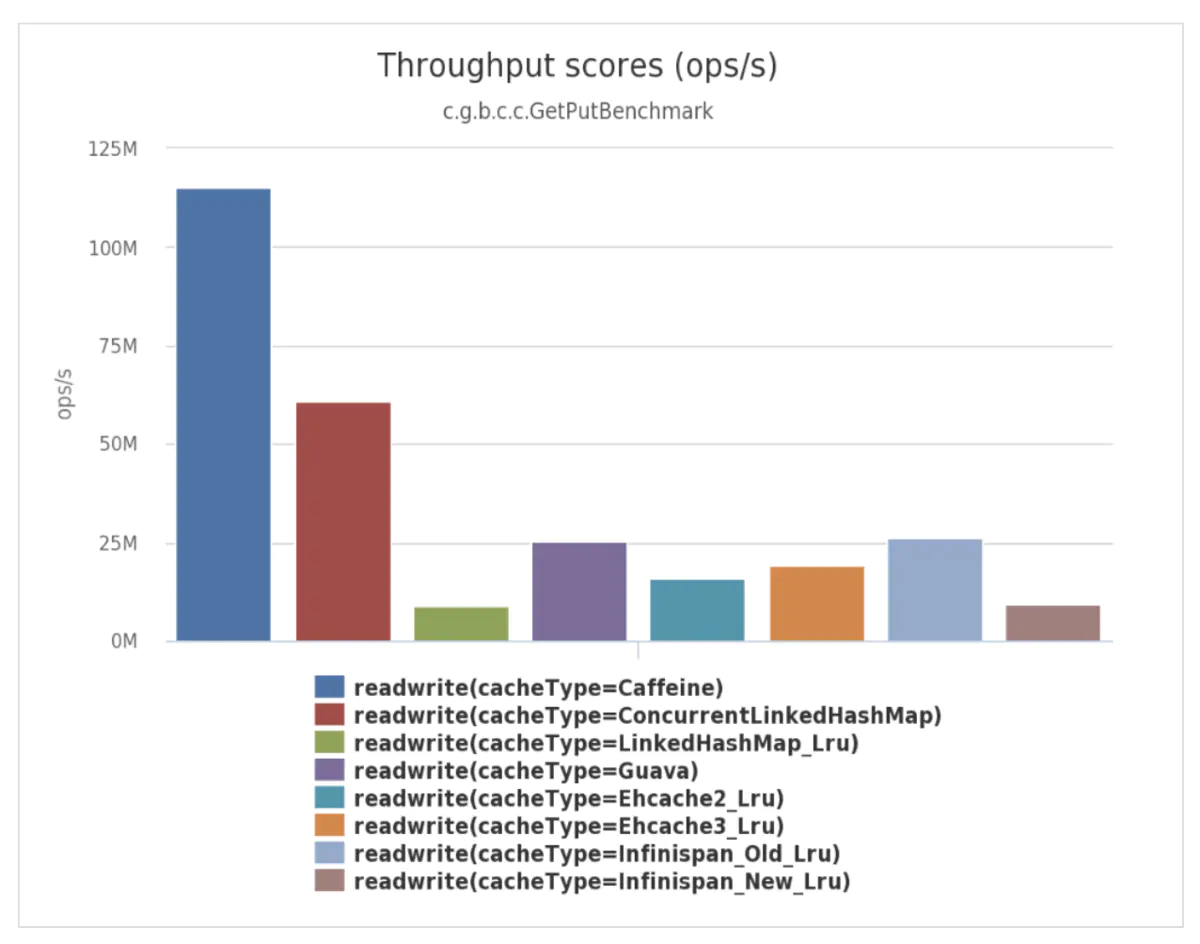 The system generally limits the maximum space of the cache. When the cache is full and new cache items need to be written, there needs to be a mechanism to determine which cache items are eliminated from the cache.

Set the maximum space of FIFO, the first cache item into the FIFO (write cache) is eliminated first, regardless of whether the eliminated cache item has been accessed later (read or write), the FIFO approach is very simple to implement, but the cache hit rate (hit rate) is not ideal, the general-purpose cache is basically not considered.

LRU (Least Recent Use) actually sorts the cache items based on their last access time (read or write), the cache items with the earliest access time (i.e. furthest from the current time, the oldest cache items) are eliminated first, and the cache items with the last access time closest to the current time (the meaning of last recent) are kept. the advantage of LRU is that Because the most recently accessed cache items are kept, the probability of these cache items being used again is relatively high according to the locality principle, so the hit rate of LRU is still good, and at the same time, the implementation of LRU is relatively simple (although a bit more complex than the FIFO approach), and an intermediate to senior java developer can implement a basic functional LRU cache without much cost, so LRU’s are used very frequently. The cache we see in most systems is basically an LRU cache. lRU can handle a small amount of sparse traffic very well (sparse burst, i.e., not used after a few uses in a short period of time), but it cannot handle a large amount of sparse traffic, because it will then eliminate the cache items that are used very frequently, and these caches will be accessed frequently later. For example, some patrol items in the system write a lot of cache items that are only used once to the cache, thus crowding out which cache items are really used frequently.

To solve the first drawback of LFU introduced above, the LFU frequency statistic method of caffeine cache uses the Count-Min Sketch algorithm. This algorithm borrows the idea of boomfilter, except that the value corresponding to the hash key is not a true or false flag indicating the existence, but a counter. It uses four hash functions, and the four hash functions simultaneously calculate the hash value for the cache item key, adding one to the counter corresponding to the hash value. The counter only has 4 bits, so the counter can only count up to 15, and when it exceeds 15, it will keep 15 unchanged and will not increase the count upwards. The counter can only count up to 15, the capacity is smaller than the pre-tuning, but from the actual test, the effect is better than the pre-tuning. Because of the positive false problem of bloomfilter (in fact, there is a hash conflict), the frequency value of the cache item takes the minimum value of the four counters (this is the meaning of Count-Min). When the sum of all counter values exceeds a set threshold (default is 10 times the maximum number of cache items), all counter values are reduced to half of their original value.

The detailed implementation scheme of the Count-Min Sketch algorithm is as follows. 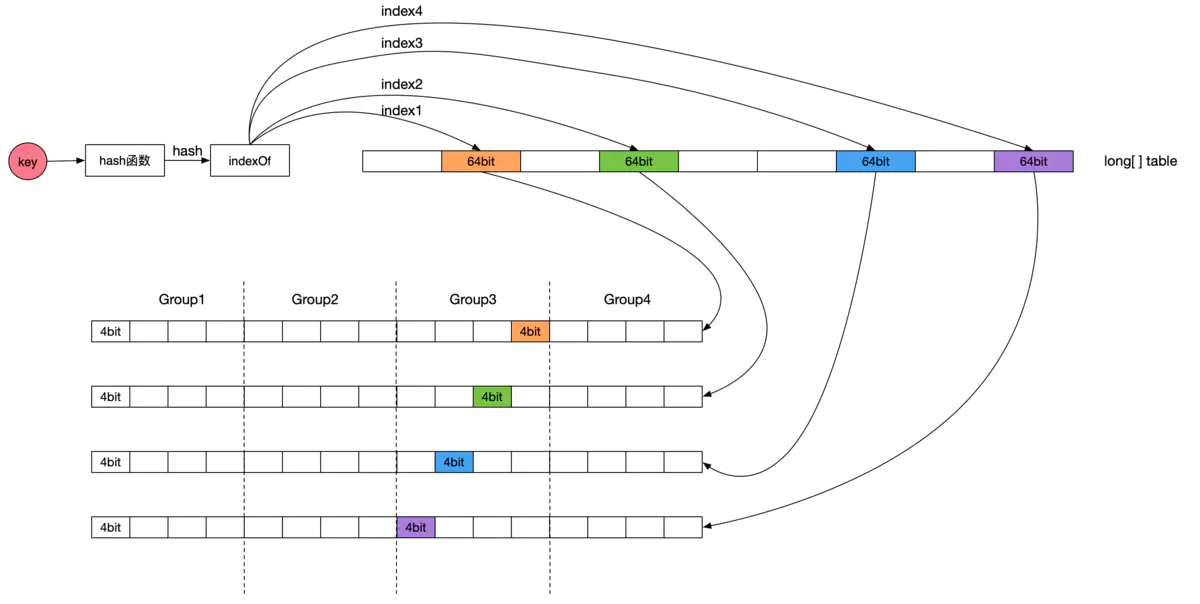 Count-Min Sketch maintains a long[] table array, the size of which is the cache space capacity (the maximum number of cache items) rounded up to the nth power of 2. The counter of Count-Min Sketch is 4 bits, and the size of each element of the table array is 64 bits, which is equivalent to the table element containing 16 counters. The 16 counters are further divided into 4 groups, so each group contains 4 counters, which is exactly equal to the number of bloom hash functions, and the four counters of the same key use the counters of the corresponding positions in the group. Each table element contains 16 counters, and the offset of the 4 hash counters in the corresponding table element is not the same, which can effectively reduce hash conflicts.

From the description of Count-Min Sketch frequency statistical calculation method, it can be seen that the counter size is only 4bit, which greatly reduces the storage space requirement of LFU frequency statistics. At the same time, the upper limit of counter statistics is 15 and all counter values are halved when the count sum reaches the threshold, which is equivalent to the introduction of count saturation and decay mechanism, which can effectively solve the problem that sudden large traffic cannot be effectively eliminated in a short period of time. For example, there is a burst hot event, which has hundreds or thousands of times more visits than other events, but the hot event cools down quickly, and the traditional LFU elimination mechanism will keep the cache of the event in the cache for a long time without eliminating it, although the type of event has been visited very little or no one is interested in it anymore.

As mentioned above, the LFU of caffeine cache uses the Count-Min Sketch frequency statistical calculation method, and the counter of this LFU is only 4bit in size, so it is called TinyLFU. TinyLFU solves the first problem listed above for LFU, but does not solve the second problem. The second problem listed above is solved by introducing a Window Cache based on LRU based on TinyLFU algorithm, and this new algorithm is called W-TinyLFU (Window-TinyLFU).

The framework of the W-TinyLFU algorithm is shown below.

The TinyLFU elimination mechanism is.