Starting with the OCI specification

The OCI (Open Container Initiative) specification is the de facto container standard that has been adopted by most container implementations and container orchestration systems, including Docker and Kubernetes, and was introduced in 2015 by Dokcer as the lead company.

Starting with the OCI specification to understand container images allows us to build a clearer picture of container technology rather than getting bogged down in implementation details. The OCI specification is divided into two parts, Image spec and Runtime spec, which cover different phases of the container lifecycle.

The image specification defines how to create an OCI-compliant image. It specifies the content and format that the image’s build system needs to output, and the output container image can be unpacked into a runtime bundle, which is a folder consisting of specific files and directory structures from which the container can be run according to runtime standards.

What’s inside the image

The specification requires that the contents of the image must include the following 3 parts.

Next, let’s explore the actual contents of an image using Docker and nginx as examples. Pull a recent version of the nginx image, save it as a tar file, and extract it.

Get the contents of the nginx-img directory as follows.

First look at the contents of the manifest.json file, which is the Image Manifest for the image.

It contains the file location information for Config and Layers, which are the Image Layer Filesystem Changeset and Image Configuration as specified in the standard.

Config is stored in a separate json file, which is more extensive than we can show, and contains the following information.

The tar files in the Layers list together form the rootfs of the generated container, the image of the container is built in layers, the order of the elements in Layers also represents the order of the stack of image layers, all layers form a stack structure from bottom to top. Let’s first look at the contents of the base layer, the first record.

The contents of the extracted file in the base directory are as follows.

This is already a complete rootfs, look at the contents of the file obtained from the top layer of layer.

There is only one shell script file, which means that the image is built incrementally, with each layer containing only the contents of files that have changed compared to lower layers, which is why the container image is kept small.

How to delete a file in a image layer

Each layer in Layers is a ChangeSet for the file system, and the ChangeSet contains three kinds of changes: add, modify and delete. The case of adding or modifying (replacing) a file is better handled, but how to delete a file when applying a ChangeSet? The answer is to use Whiteouts to indicate the file or folder to be deleted.

A Whiteouts file is an empty file with a special filename, and the prefix .wh. added to the base name of the path to be deleted in the filename indicates that a path (at a lower layer) should be deleted. Suppose there are the following files in a layer.

If a higher level layer of the application contains . /etc/.wh.my-app-config, the original . /etc/my-app-config path will be removed when that layer is changed.

How to merge multiple image layers into a single file system

The specification has only a schematic description of how to apply multiple image layers into a single file system, so if we want to apply Layer B on top of Layer A.

In practice more efficient implementations such as federated file systems are used.

What is Union File System

Union File System, also known as UnionFS, is a system that mounts multiple directories from different locations to the same directory.

The following is an example of Ubuntu distribution and unionfs-fuse implementation to demonstrate the effect of union mount.

How OverlayFS in Docker works

The current federated filesystem implementation used by most distributions of Docker is overlay2, which is much lighter and more efficient than other implementations, so here is an example to understand how it works.

Following the example of the nginx image above, pull the image and extract the corresponding layer to the /var/lib/docker/overlay2 directory.

We save the output to the layers.a file for later comparison. The six l directories contain the six layers of the image (the directory names do not correspond to the names in manifest.json), and the l directory contains soft links to the layers folder, mainly for the purpose of shortening the directory identifiers to avoid exceeding the page size limit when executing the mount command.

The contents of each layer folder are as follows.

link records the short links in the l directory, lower records the lower layer of the layer (if there is no such file, the current layer is already the lowest layer, i.e. the base layer), the work directory is used internally by overlay2, and the diff directory holds the contents of the filesystem contained in the layer.

Now let’s try to run a container based on this image and see the effect of co-mounting during the container phase.

Execute the mount command to confirm the addition of a read/write overlay mount point.

This mount point contains a rootfs that is a combination of all the image layers layer.

In addition to co-mounting the original image layer to the merged directory as shown above, the diff command shows that two new layer directories are added to /var/lib/docker/overlay2 after the container runs successfully, and merged is also located in one of them.

Probing the GraphDriver of a running container with the inspect command allows you to see more clearly how the container’s layers have changed compared to the image.

LowerDir records the original image layer file system, in addition to a new init layer at the top, they are read-only in the container runtime; MergedDir records all the directories of LowerDir for joint mounting mount point; UpperDir is also a new layer, at this time is also a new layer, which is at the top of all the above layers and is read and writeable compared to the other image layers. The layers of the container stage are shown below. 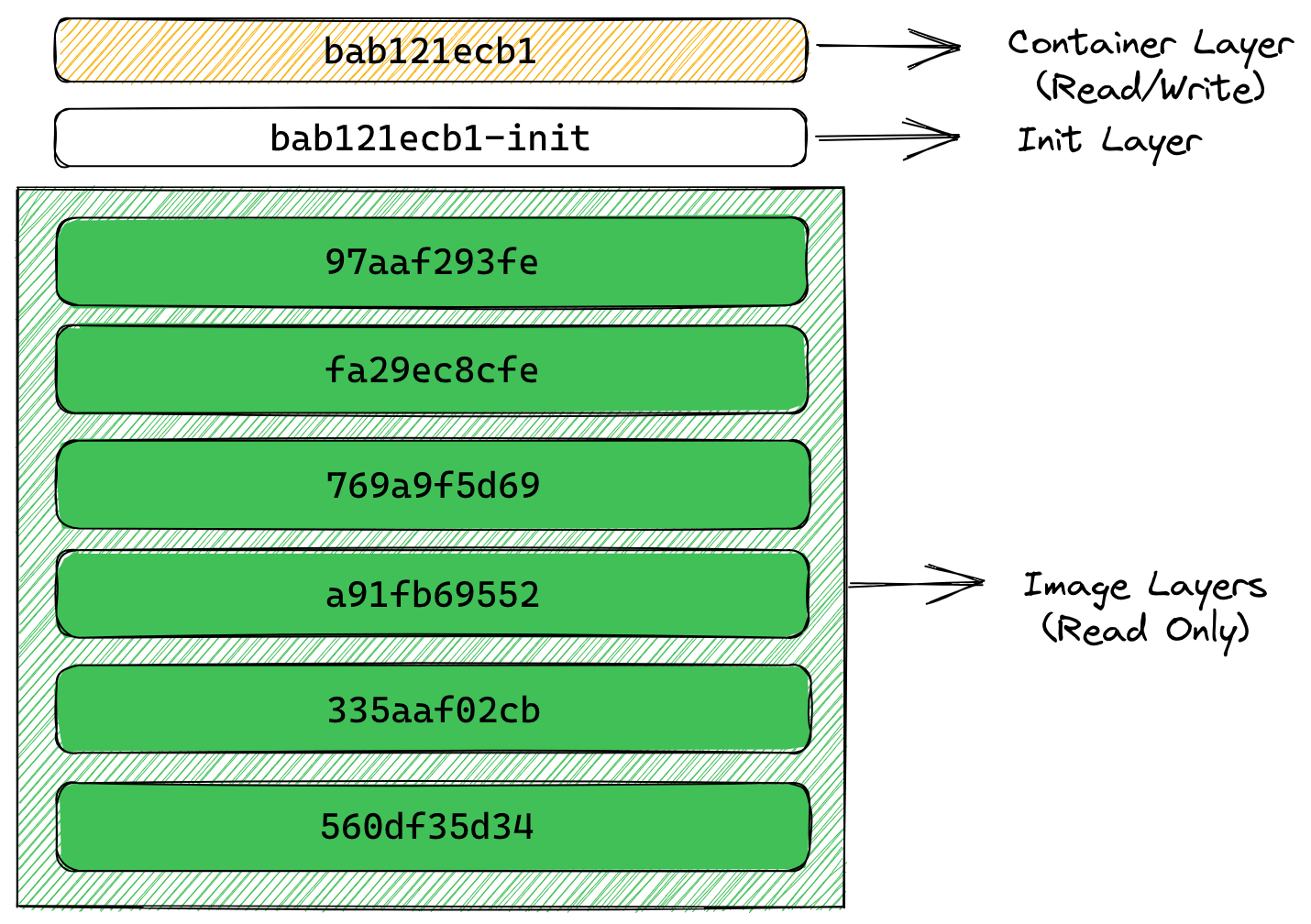 The new writable layer added when creating a container is called container layer, and any changes to the file system during the container runtime are only written to this layer, including additions, modifications and deletions of files, without changing the contents of the original image at lower layers. This greatly improves the efficiency of image distribution. The init layer between the image layer and the container layer records some configuration files written by the container at startup, which happens before the new read/write layer is added, and we do not want to write this data to the original image.

To minimize I/O and reduce image size, a container’s federated file system uses a copy-on-write strategy for reading and writing files. If a file or directory exists on a lower tier in the image and another tier (including the writable tier) needs to read access to it, it will access the file on the lower tier directly. The first time another layer needs to write to that file (when building an image or running a container), the file is copied to that layer and modified. This greatly reduces the startup time of the container (the new writeable layer at startup has very few files to write), but each time a file is modified for the first time after the container is running, the entire file needs to be copied to the container layer first.

For the above reasons, the read and write efficiency of container runtime is not as good as the native file system (especially the write efficiency), so it is not suitable to do a lot of file reading and writing in the container layer. Bind Mount) directly in the read-write layer, bypassing the performance loss caused by copy-on-write.

The container lifecycle, as defined by the specification, describes a timeline consisting of events that occur from the creation to the exit of a container, which defines 13 different events, and the following diagram depicts the changes in the container state in the timeline. Each operation is also preceded or followed by different hooks, which must be executed by the compliant runtime.

The essence of a container is a process

The following diagram summarizes the relationship between Docker-related organizations and projects within the container ecosystem. 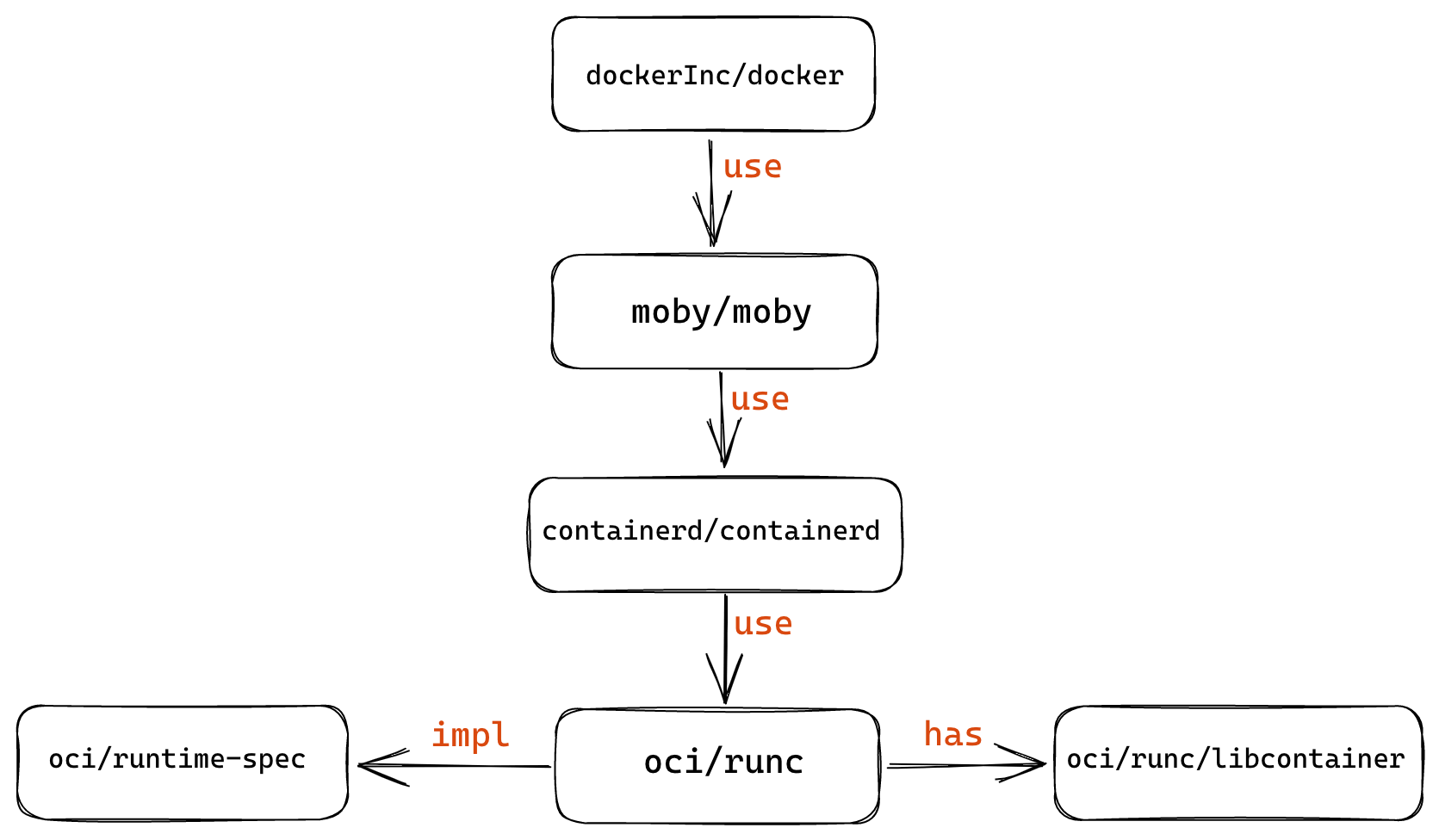 Kubernetes defines a CRI (Container Runtime Interface) to implement an interchangeable container runtime, and there are several implementations such as cri-containerd, cri-o and docker, but they are all actually based on runC as well. 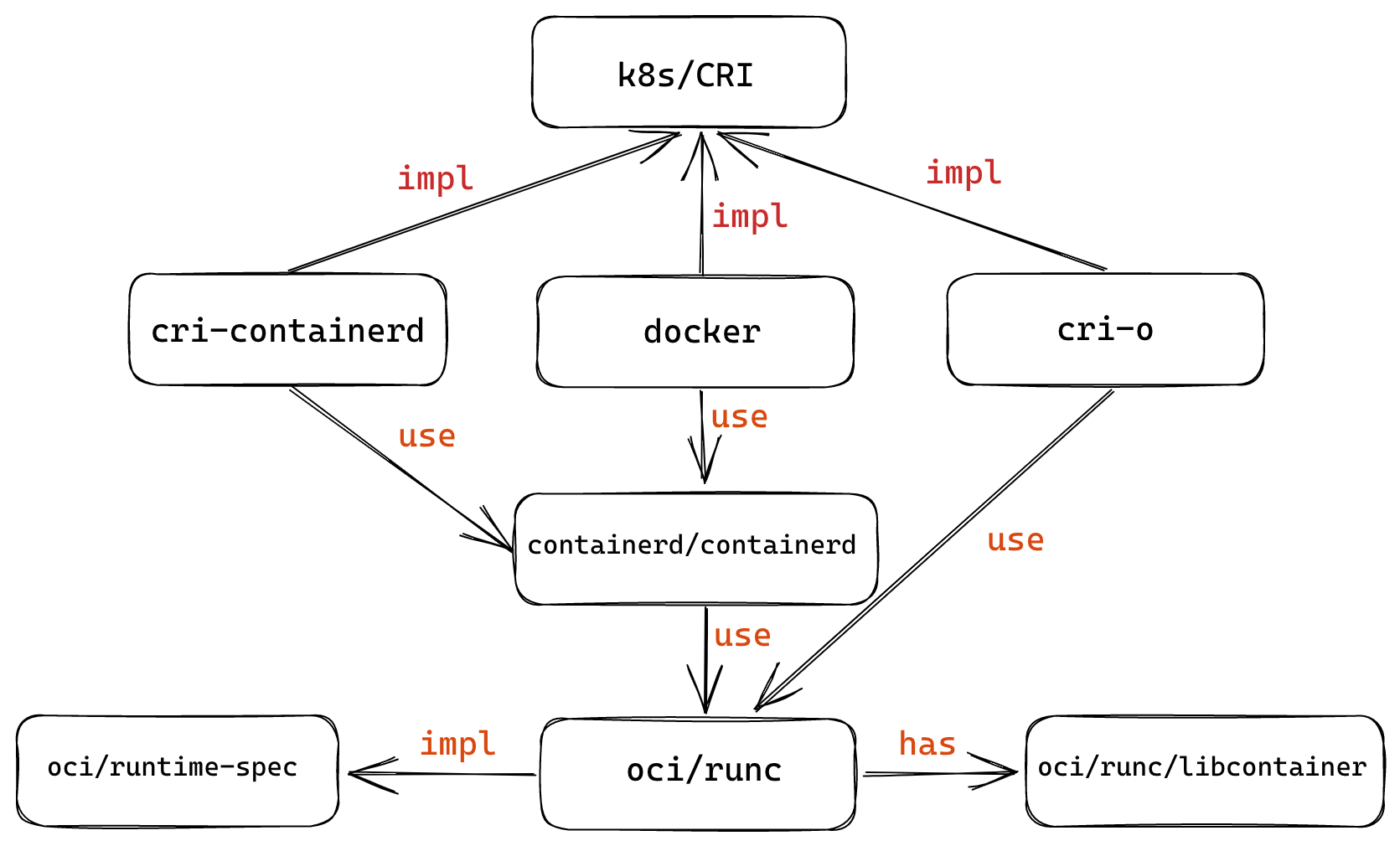