As the cloud-native ecosystem continues to evolve, most of the current Kubernetes-based cloud-native technologies almost always adopt the CRD + Controller model. Even without a custom CRD, there will be a need for a controller to detect resources of interest and do the work required by the business when their state changes.

controller-runtime is a relatively good tool provided by the Kubernetes community to quickly build a set of watch for ApiServer. This article will give a brief summary and introduction of how controller-runtime works and how it is used in different scenarios.

The architecture of controller-runtime can be summarized in the following diagram. Note: Webhook is not in the scope of this article, so it is omitted from the diagram. 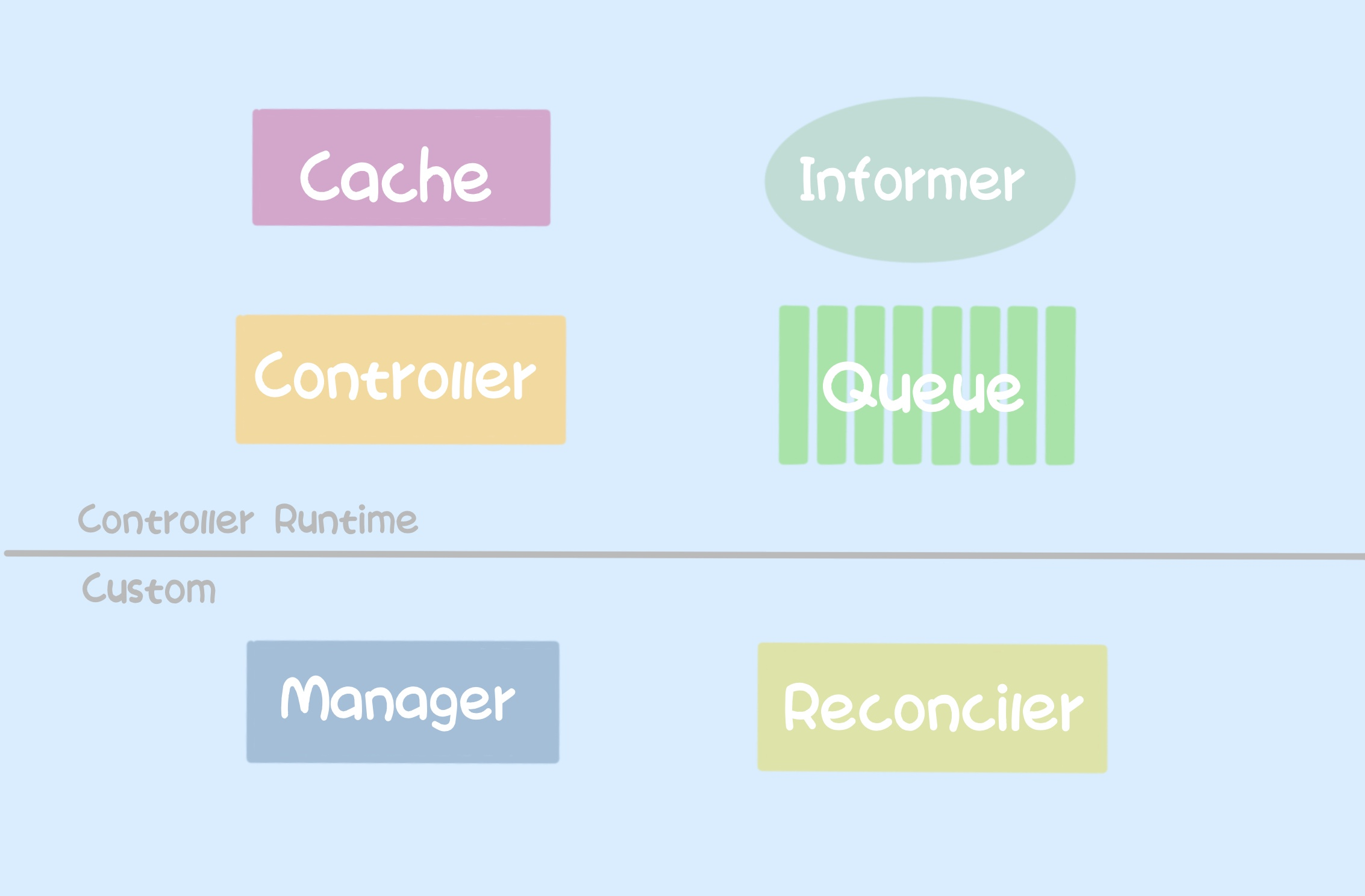 The controller-runtime component, Cache, as the name implies, is a cache, which is used to establish the Informer’s connection to the ApiServer to watch the resources and push the watched objects into the queue; the Controller will register the eventHandler with the Informer on the one hand, and get the data from the queue on the other. On the other hand, the controller will take data from the queue and execute the user-side Reconciler functions.

The entire workflow on the controller-runtime side is as follows. 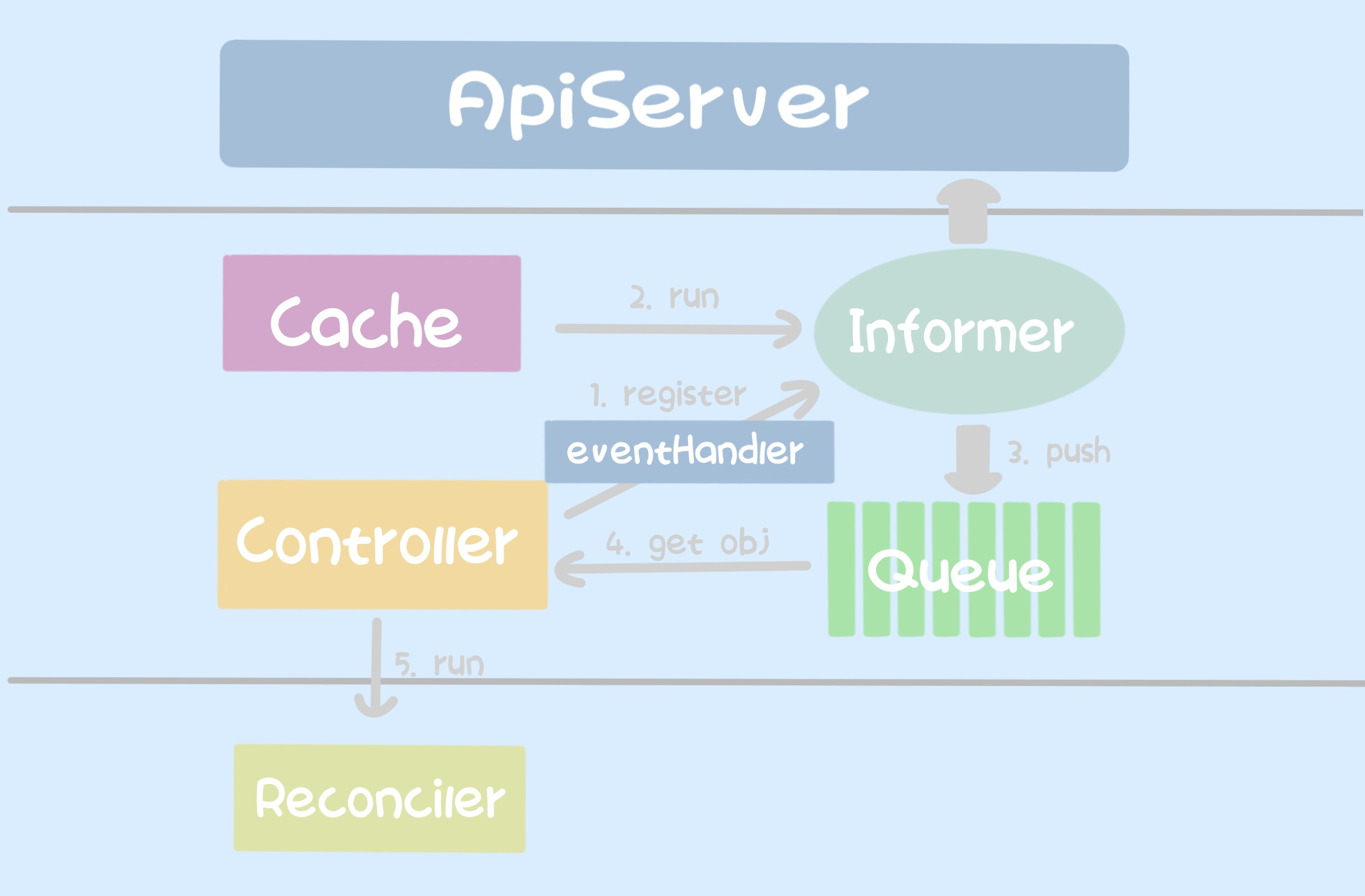 We are already familiar with the usage of controller-runtime, and the simplest usage can be expressed in the following code.

The first step is to initialize the Manager and generate a default configuration of the Cache.

The second step is to initialize the Controller.

The user’s Reconciler just needs to implement the reconcile.Reconciler interface.

The last step is to start the Manager, which starts the Cache, i.e. the Informer, and the Controller at the same time.

In the whole architecture, Informer plays the role of ListWatch for ApiServer, and when it detects the change of the resource it is interested in, it will process it according to the registered eventHandler and determine whether it needs to be pushed into the queue.

So, in the process of using it, we can register the eventHandler function of Informer into it when we create the Controller, as follows.

Adding the logic of judging resources before they are added to the Queue in predicate can effectively prevent the queue from being pushed with too many useless resources. If our Reconciler needs to detect multiple resources, here the Controller can perform watch for different resource types and register different eventHandler each time.

In addition, we can also add a valid LabelSelector or FieldSelector to Informer’s ListWatch function to further reduce the detected invalid resources, which can also play a role in reducing the pressure on ApiServer in case of a large amount of cluster resources. The details are as follows.

Note that controller-runtime is only available in version v0.11.0 to set the cache selector.

Among them, structured is a deterministic resource, which needs to register the corresponding resource type in scheme; unstructured is an indeterminate resource; and metadata is a request to ApiServer in the form of protobuf.

Take structured as an example.

You can see that in Informer’s ListWatch interface, p.selectors(gvk).ApplyToList(&opts) will add the selector we registered at the beginning to the list/watch request that follows.

In the above example, we mentioned that metadata uses protobuf serialized form to request ApiServer, which is more efficient than the default serialized type json, and performs better in large-scale environments. However, not all resource types support the protobuf format, for example, CRD does not.

Another point to note is that in Metadata data, the only data that is watched is metadata, not spec and status.

In the Cache metadata data, the data format used is meta.v1.PartialObjectMetadata, the premise is that the user only cares about the metadata of the resource, not its spec and status, so in the ListWatch function of the ApiServer, only the metadata is fetched. The source code is as follows.

As you can see, the controller-runtime uses client-go.metadata.Client and the data format returned by this Client’s interface is PartialObjectMetadata.