This article describes the steps a process born from a Linux shell has to go through to become a daemon process.

A background process, as you can imagine, executes in the background, without a terminal, without a login shell, and processes when certain Events occur, or periodically performs a task. Usually, daemon processes end in d, but it is not required. For example, the daemon processes for Redis and Nginx do not end in d. In short, a daemon needs to have two basic requirements:

In addition, the daemon process usually does several things.

This is what daemon processes typically do, and is described in more detail in man 7 daemon. Next, the best part of daemon is discussed, which is how it finishes detaching from the terminal with two fork()s.

The previous section describes some of the simpler processes, such as chdir, reset umask, etc. The next section discusses how to get out of terminal.

To make it easier for the reader to understand, I’ll draw a diagram and label what changes occur at each step of the action, and then explain exactly what happens. 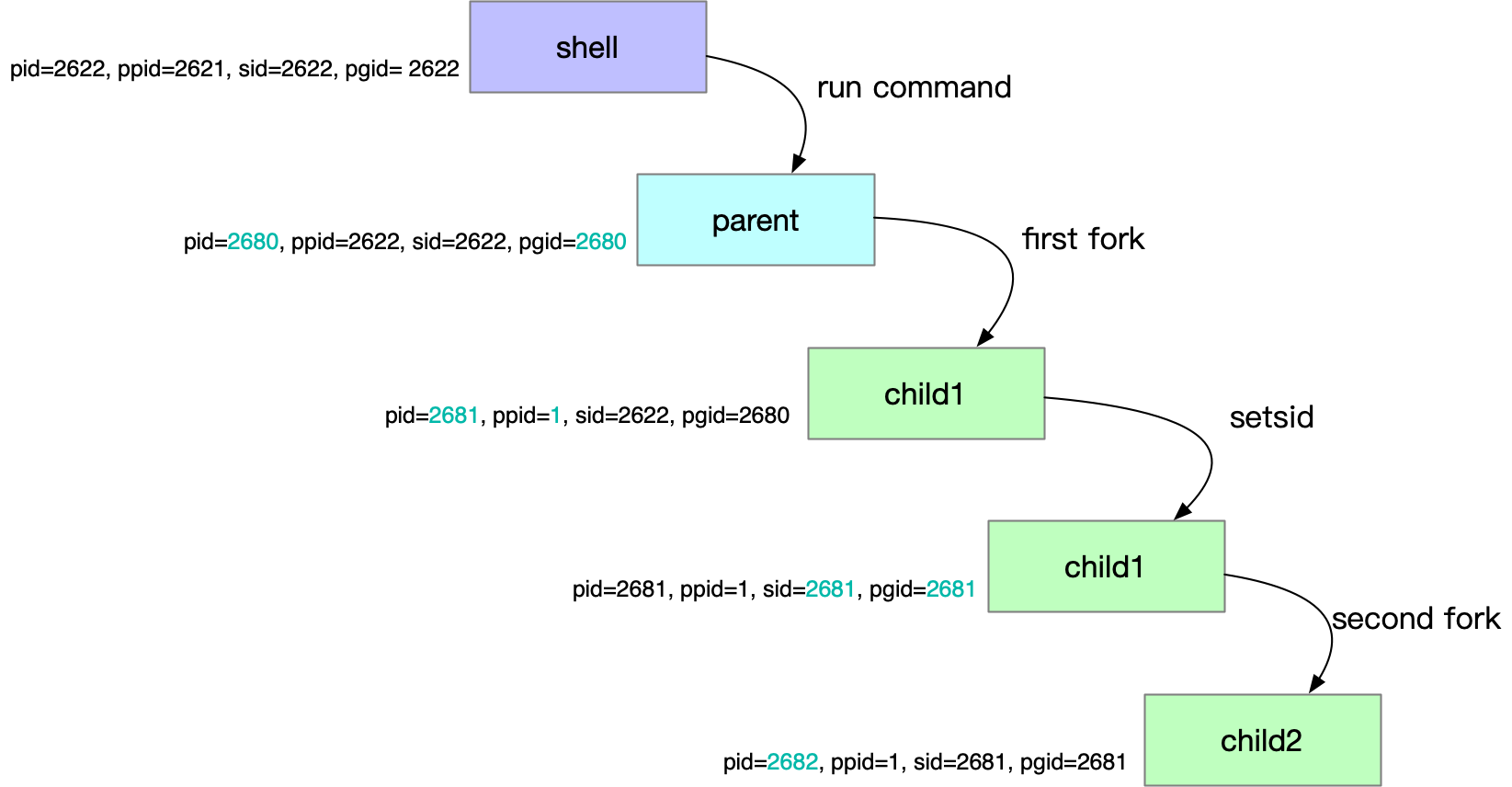 The shell creates processes. 1) What is a pid? The kernel assigns a pid. 2) What is a ppid? The process that created this process, that is, the parent process, here is the shell’s pid. sid What is it? 3) sid refers to the session id, this article does not introduce too much, the reader can think of the shell and the shell in a group of session processes, so that when the shell exits will give the session leader id for the shell id processes are When the shell exits, it will send a SIGHUP to all processes with the shell id, and the child processes it created will all exit together, which is convenient for management. So, the sid of the newly created process is also shell pid, which is automatically added to the shell’s session. 4) What is pgid? pgid is process group id, which is a group of process ids. consider this command: grep GET accessl.log | awk '{print $1}' | sort | uniq, if we want to end this command, we will not want to grep, awk… but want to end them all one by one. To make it easier to manage, the shell will put such pipelined processes into a group, so that they can be terminated together by pgid for easy management. So, the pgid of a newly created process is itself, and it is also called group leader.

setsid. Since the child’s sid is still the shell’s id, it will still be taken away when the shell exits. But after setsid, its pgid and sid are both equal to its pid, which means it becomes the session leader and group leader. This is actually the reason why we need to fork a second time, and it is also the place where I was most confused and spent the most time to understand.

This process can also be seen in the daemon function inside daemonize, which is the same as the above process.

I wrote a code to demonstrate twice fork() various pid changes, the result will be the same as the above figure.

If you use systemd as a task control mechanism, be aware that you need to set up your process according to these system-defined readiness protocols, i.e. you can delegate things like chdir, umask to systemd, but you need to follow systemd’s protocols to tell it that your process is ready to be served.

A common mistake is to fork() twice in your own process, but use Type=simple in systemd, thinking that this is telling systemd that your process is a normal process that handles its own daemon, when in fact it is telling systemd that your process is ready immediately after it starts. The process that ExecStarted is the target process, so when the parent process fork() and exits for the first time, systemd thinks your process is hung. Many times, when you control a service like Redis Nginx with systemd, it always times out, usually because of this same problem. There are many examples of common errors here, so I won’t explain them one by one, and I’ll write another article to introduce the use of systemd.