Whenever we write a non-hello world utility Go program or library, we will trudge around in front of the three “thresholds” of project structure, code style, and identifier naming for a long time, and never even get a satisfactory answer.

In this article, we will introduce in detail how to cross the “threshold” of Go project structure to help you get into the core hinterland of Go language faster and improve your learning efficiency.

Unless it is a simple program like hello world, whenever we write a utility or library, we will encounter the problem of what project structure to use (usually a Go project corresponds to a repository). In Go, the project structure is also very important, because it determines the layout of packages and package dependencies within the project, and also affects the dependencies and references of external projects to packages in the project.

1. The project structure of the Go project

Let’s take a look at the project structure of the Go language itself, the world’s first Go project.

Regarding the structure below the src directory above, I have summarized three features.

Several structural changes have occurred in the src directory under Go projects since Go version 1.3 to date.

Here is the complete layout in the src directory of the latest Go 1.16 release.

As for pkg, cmd, docs, these directories should not be part of the standard structure of a Go project, or at least not required. I believe that the minimum standard layout given by Russ Cox is consistent with Go’s philosophy of “simplicity”, which is flexible enough to meet the needs of various Go projects.

However, before Russ Cox elaborated on the minimum standard, the Go community was in a “non-standard” state, and the influence of the early Go language’s own project structure on a large number of existing Go open source projects is still lasting. For larger Go applications, we are bound to extend the “minimal standard layout”. This extension will obviously not be blind, but will still refer to the Go language project’s own structural layout, so we have the following unofficial standard suggested structural layout.

(2) Go project structure for the purpose of building binary executables

Based on the early structure of Go language projects themselves and their subsequent evolution, the Go community has gradually formed a typical project structure after years of Go language practice accumulation, which is compatible with Russ Cox’s minimum standard layout, as shown in Figure 1. 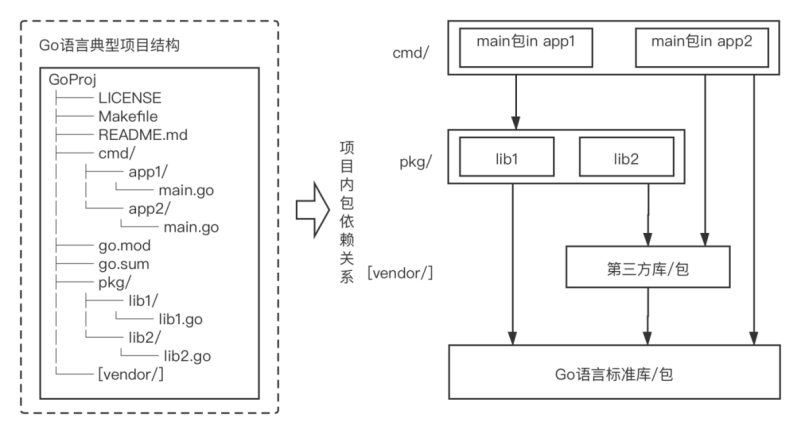 The above is the structure of a typical Go project that supports building binary executables (under cmd), let’s look at the purpose of each important directory separately.

Go 1.11 introduces a module as a collection of packages that belong to the same versioning unit. And while Go supports multiple modules in a project/repository, this management approach may introduce more complexity than a certain percentage of code duplication. Therefore, if there are versioning “divergences” in the project structure, e.g. app1 and app2 releases are not always in sync, then I recommend splitting the project into multiple projects (repositories), with each project being a separate module for separate versioning and evolution.

When Go 1.4 was released, the Go language project itself removed the pkg layer under src. This structural change has some impact on the structure of Go library-type projects that are built for library-only purposes. Let’s look at the structure of a typical Go library type project, see Figure 2. 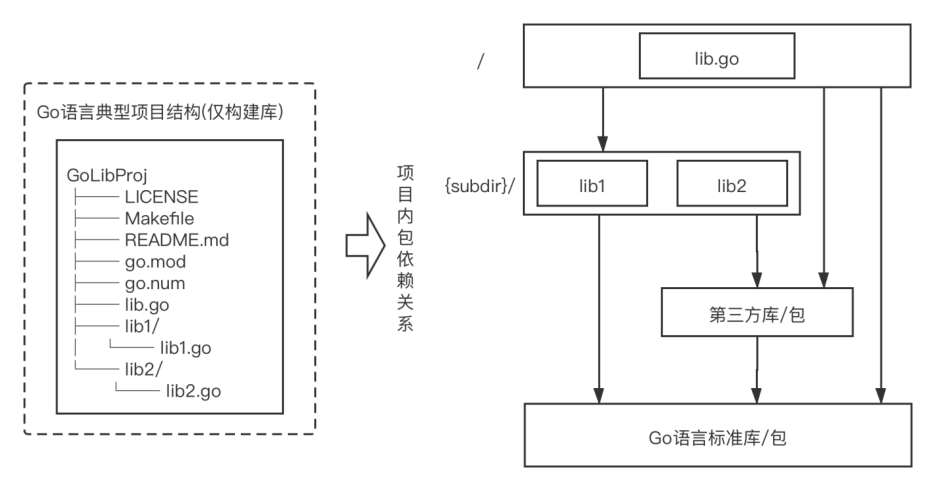 We see that the library type project structure is also compatible with the minimum standard layout of a Go project, but is simpler than a Go project that aims to build binary executables.

(4) About the internal directory

For any of the above types of Go projects, for packages that you do not want to expose to external references, but only for internal use, the project structure can be implemented through the internal package mechanism introduced in Go 1.4. In the case of library projects, the easiest way to do this is to add an internal directory at the top level and put all packages that you don’t want to expose to the outside in that directory, such as ilib1 and ilib2 in the project structure below.

Thus, according to the principle of the go internal mechanism, ilib1 and ilib2 in the internal directory can be imported and used by code in other directories (such as lib.go, lib1/lib1.go, etc.) with the GoLibProj directory as the root directory, but not by code outside the GoLibProj directory. This allows for selective exposure of API packages. Of course internal can be placed at any directory level in the project structure, but it is critical that the project structure designer is clear about what to expose to the outer code and what to use only in sibling directories or subdirectories.

For projects that aim to build binary executable types, we can also aggregate packages that we don’t want to expose to the outside under internal at the top-level path of the project, echoing the aggregation directory pkg for packages that are exposed to the outside.

This article has detailed the history of the structural layout of Go language projects and the de facto standards for Go project structures. The two project reference structures for building binary executable types and library types in this article are recognized and widely used by the Go community after years of practice, and they are compatible with the minimum standard layout for Go projects proposed by Russ Cox, which is valuable for slightly larger Go projects. However, they are not required, and in the early days of the Go language, the practice of placing all source files in a root package located at the root of the project worked equally well in some small-scale projects.

For projects aiming to build binary executable types, the removal of the pkg hierarchy is also the structural layout of choice for many projects, influenced by the Go 1.4 project structure.

The above reference project structure is similar to the idea of “minimum viable product” (mvp) in the field of product design and development, and developers can extend it based on such a minimum “project structure core” according to their actual needs.