Open vSwitch is an open source implementation of virtual switches. Widely used in the cloud computing industry to provide network administrators with visibility and control of traffic between and within virtual cloud hosts, Open vSwitch is designed to solve network problems with a virtualization solution that works with controller software to enable distributed virtual switching technology. This means that the switch and controller software can create clustered network configurations across multiple servers, eliminating the need for separate network configurations on each cloud host and physical host. This switch also supports VLAN trunking, visibility through NetFlow, sFlow and RSPAN, and management through the OpenFlow protocol. It also has several other features: strict flow control, which is enabled by the OpenFlow switch protocol; and remote management capabilities, which enable more control through network policies.

In terms of Flow controllers or management tools for virtual switches, OvS requires the use of third-party controllers or management tools to implement complex forwarding policies. For example, if OvS supports the OpenFlow protocol, we can use any controller that supports the OpenFlow protocol to remotely manage OvS. However, this does not mean that OvS must have a controller to work. Without an external controller attached, OvS itself can rely on MAC address learning for Layer 2 packet forwarding functions, just like Linux Bridge. 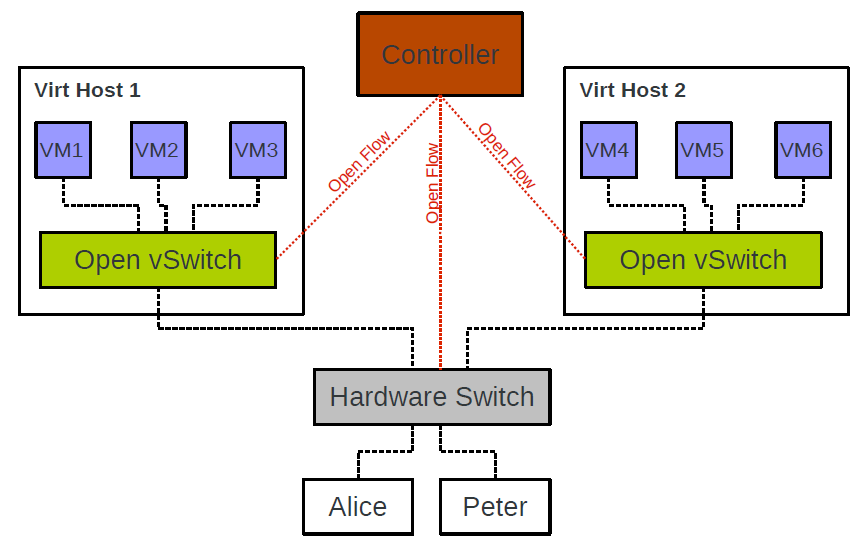 In short, Open vSwitch, the open OpenFlow switch, is capable of product-level quality, meaning it can be deployed for use in a number of production environments. It supports not only basic Layer 2 switching, but also standard management machine interfaces and protocols (e.g. NetFlow, sFlow, SPAN, RSAPN, CLI, LACP, 802.1ag), which can be well integrated with SDN systems. 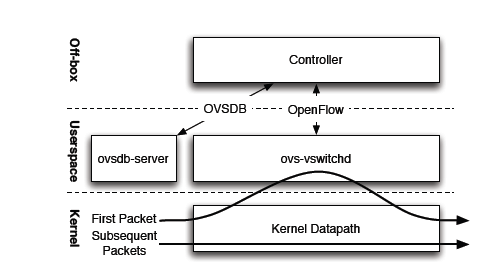 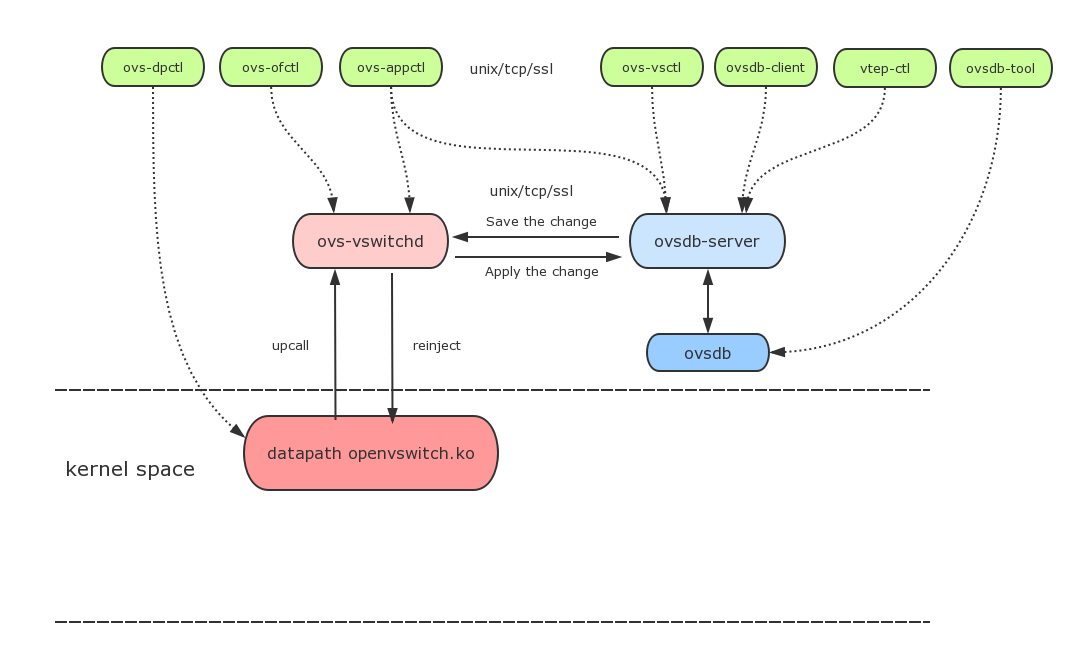 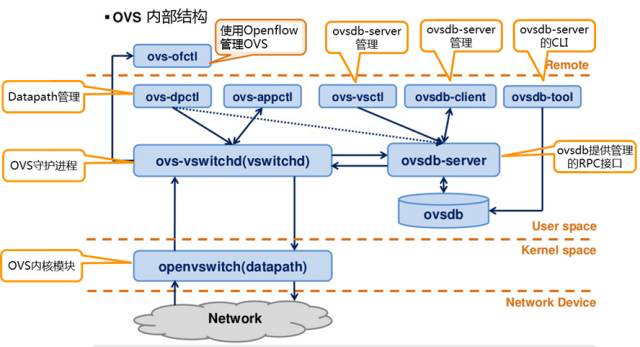 ovs-vswitchd is essentially a daemon, the core component of OvS. ovs-vswitchd and Datapath work together to implement Flow-based Switching for OvS. 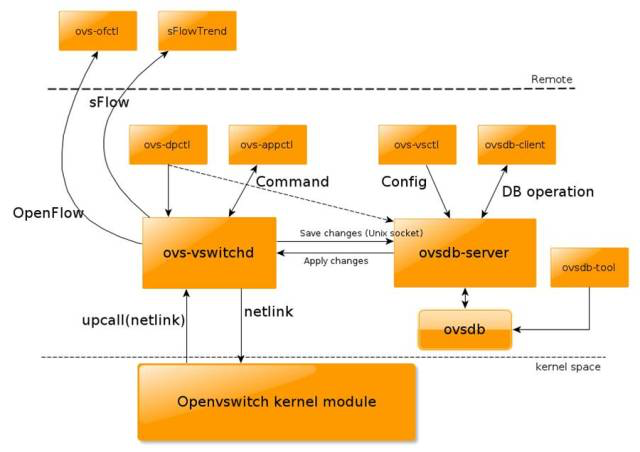 In the semantics of OpenFlow Switch rules, a technical term called Datapath is given to switches, or bridges. open vSwitch’s kernel module openvswitch.ko implements multiple Datapaths, each of which can have multiple Ports. Datapath listens to the NIC interface devices, matches the packets in the flow table, and returns the corresponding Actions to Datapath as a description of the data processing behavior after finding the matching flow table entry. The kernel module information of Datapath is as follows.

More information on Datapath can be found at The Design and Implementation of Open vSwitch.

The Bridge processes data frames according to the following rules.

The user space ovs-vswitchd and the kernel module Datapath determine the forwarding of packets as follows. 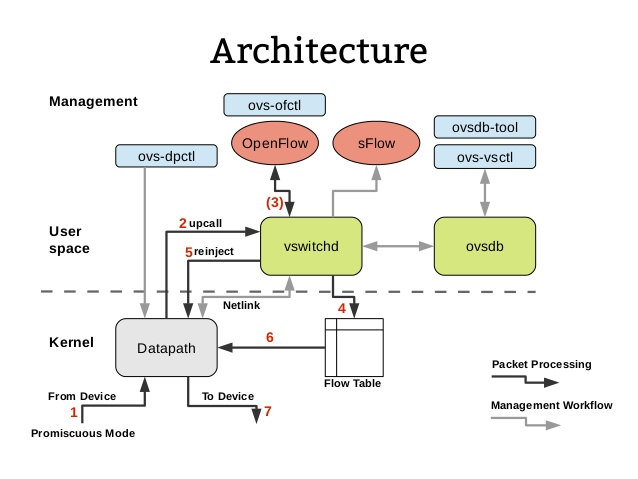 The above, Datapath and ovs-vswitchd interworking contains two ways of handling network packets.

In the user state ovs-vswtichd does not need to skimp on memory, it contains all the flow table entries that may have been issued by the OpenFlow controller via the OpenFlow protocol or set by the OvS command line tool ovs-ofctl. ovs-vswtichd will match network packet information layer by layer until it finds a flow table entry for processing. If none is found, the default stream table entry is usually used, such as dropping the packet.

When a stream table entry is finally matched, it is sent down to the kernel via the netlink protocol based on the “locality principle (local data is accessed frequently over time, which is the basis of cache design)”, and when the policy is sent down to the kernel, if the kernel does not have enough memory space, it will starts eliminating some of the old policies. This ensures that the next network packet of the same type can be matched directly from the kernel, thus speeding up execution. Due to the proximate effect, the next network packet should most likely be able to match this policy. For example, if a file is transferred, a steady stream of network packets of the same type will arrive. 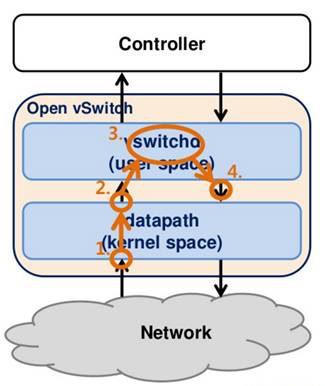 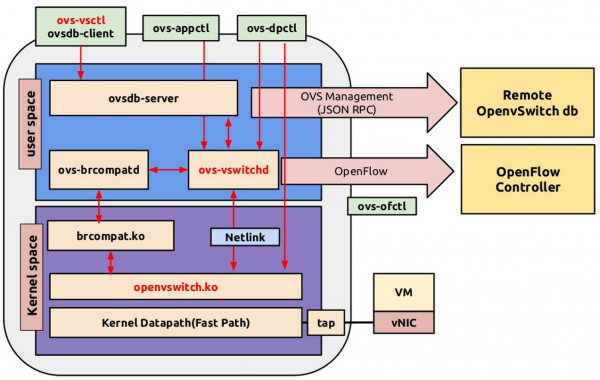 View the current version of OvS:

To view the loaded kernel modules.

The carrier of ovs-db on the operating system is the JSON file /etc/openvswitch/conf.db, whose contents can be viewed by executing the command ovsdb-client dump, e.g.

The use of graphical tools allows for a more user-friendly view of. 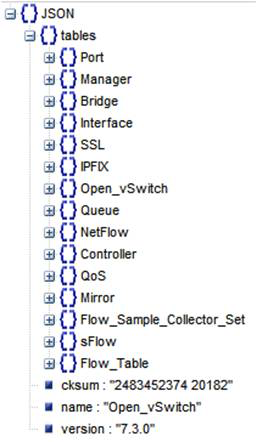 The relationship between the database tables is shown in the following diagram.

The Open_vSwitch table is the root of the OvS DB. 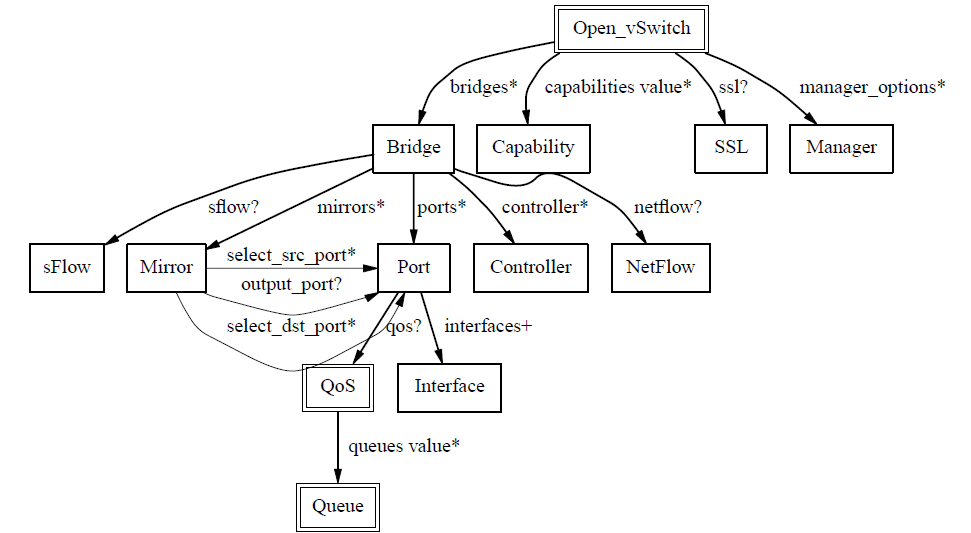 It has the following table structure, which records the configuration information of ovs-vswitchd, e.g.

The database structure is a mapping of a software’s resource model design, and the following is an overview of the characteristics and roles of each resource object based on the resource model of OvS.

The Manager object is used to configure the connection of ovsdb-server so that Clients (e.g. ovs-vswitchd, ovs-vsctl, host) can perform DB operations on ovsdb-server remotely. server is the RPC interface for ovs-db to provide management. The manager_options field in the Open_vSwitch table is loaded as the listening port.

The table structure of Manager 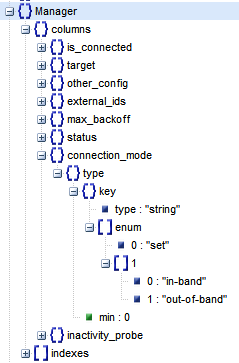 The most important field is target, which records information about the ovsdb-server’s listening parameters.

Set by the following command.

Check that the Port is turned on properly.

To perform a connection from a remote computer.

If the Open vSwitch is configured to connect to the OpenFlow controller over the network (between ovs-vswitchd and ovs-controller), then it is recommended that you use OpenSSL to build secure network communications. Bidirectional SSL ensures the integrity and and security of the OpenFlow connection to each other.

PS : Self-issued, i.e., you guarantee yourself and issue your own CSR with your own private key, so it is also called a root certificate.

NOTE : set-ssl must specify the absolute path, otherwise the certificate file will not be loaded correctly.

Bridge means bridge, but in Linux semantics Bridge has the same meaning as Ethernet switch and is the core object of Open vSwitch. The following is a list of common OvS Bridge operations.

OvS is an OpenFlow Switch implementation, which can unify the management of all distributed Bridges through OpenFlow Controlle. The so-called “management” is actually the management of the Bridge’s Flow Table. The core of SDN Controller is to control the issuance of policies and use them to make decisions about the flow of data .

OvS provides the following two Fail Modes for the Bridge. 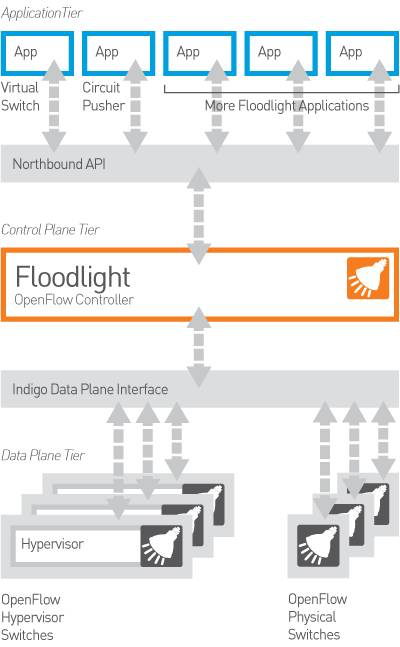 Running Floodlight in the Terminal：

NOTE : VM1, 2 and 3 are all connected to the same Bridge, so as long as all three have the IP address of the network segment, they can communicate. 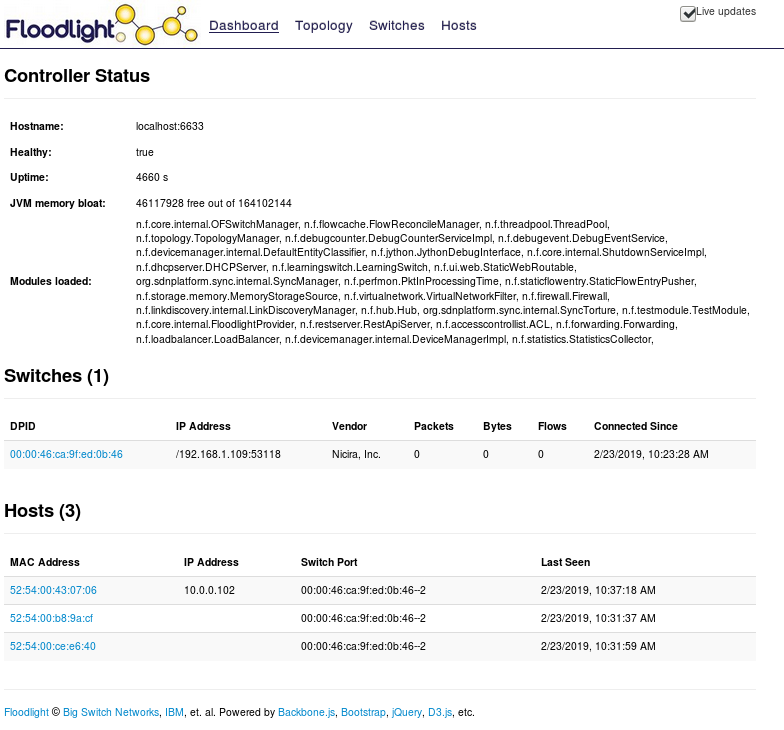 Wait for a period of time and Floodlight will collect the Bridges on the host, Hosts on the Bridge, IP/MAC addresses of the Hosts, etc.

The Floodlight Dashboard is basically a display only, so most of the operations still need to be done through the command line.

The function of Mirror is to configure a Bridge to send certain packets with certain conditions to the specified Mirrored Ports.

The packet conditions are the following.

The designated purpose Ports are either. 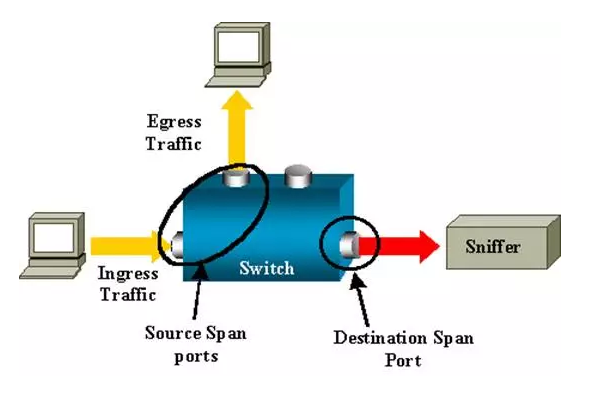 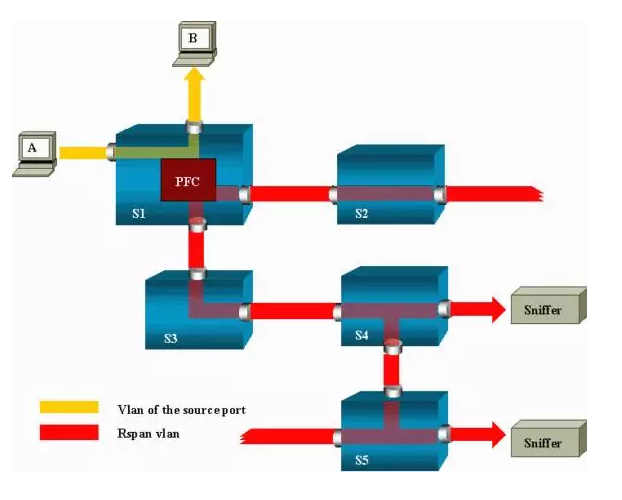 A Port is a port of a Bridge, and each Port belongs to a Bridge, while an Interface is a network interface device connected to a Port and is actually responsible for receiving and sending packets. Normally, Port and Interface have a one-to-one relationship, but when Port is configured in bond mode, Port:Interface is a 1:N relationship.

Port has the following 3 types.

An important feature of the Port is VLAN Configuration, which has two types.

In short, it is the Trunk port of the physical switch that matches the VLAN ID of the Trunks list to pass through.

In short, packets received by the Access Port are tagged and the Access Port only accepts Untag packets, otherwise they are discarded. Packets with the same VLAN ID are forwarded to the corresponding Access Port and then untagged for retransmission.

The relationship between Port and Interface is a one-to-many relationship because OvS supports the Bond feature. Bonding is the process of “bundling” multiple Interfaces together to form a virtual connection, thus achieving high availability and high throughput.

Common bond_modes are as follows. 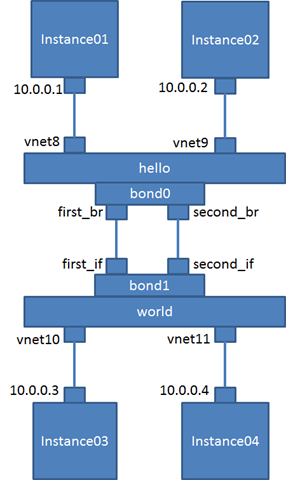 Qos in OvS is often used in conjunction with Flow Policy. It is well known that QoS has two directions, one for Ingress and one for Egress. 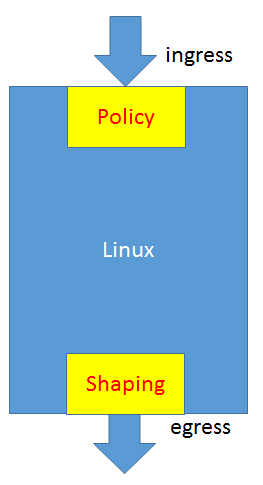 The most commonly used network QoS on Linux is the TC tool, which is mainly implemented by means of Queuing. 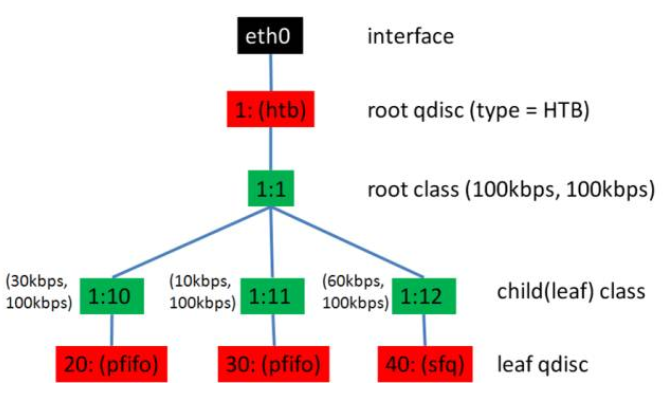 In fact, the only thing OvS can control is the Egress QoS, which is implemented through Shaping. The Ingress QoS cannot be controlled, but only the specified packets can be dropped by Policy.

Egress shaping : Port QoS policy is only supported for HTB. 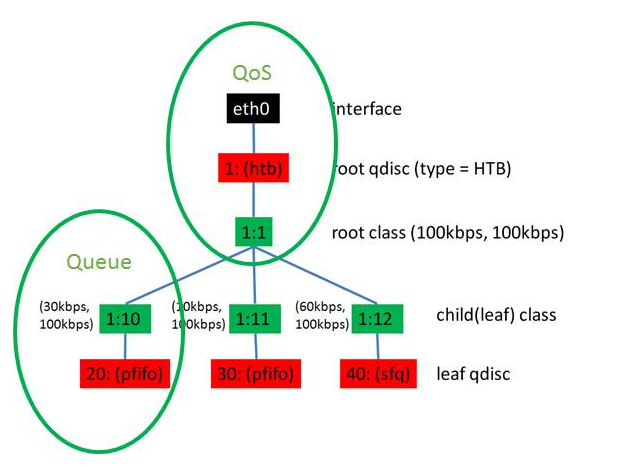 OvS supports three types of tunnels, all of which are described in the Networking Basics Terminology/Concepts, and will not be repeated. 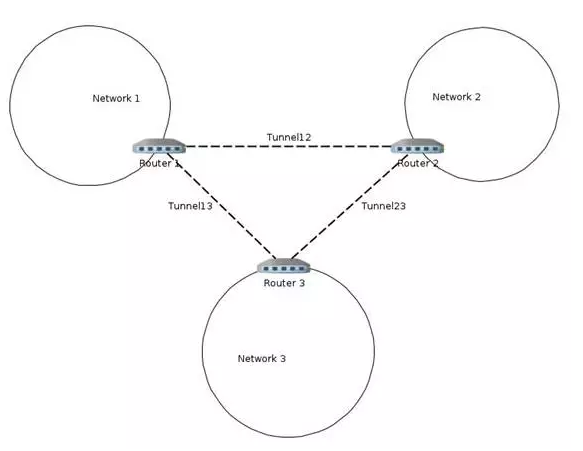 Open vSwitch defines a series of Flow Tables that control the flow and structure of network packets. 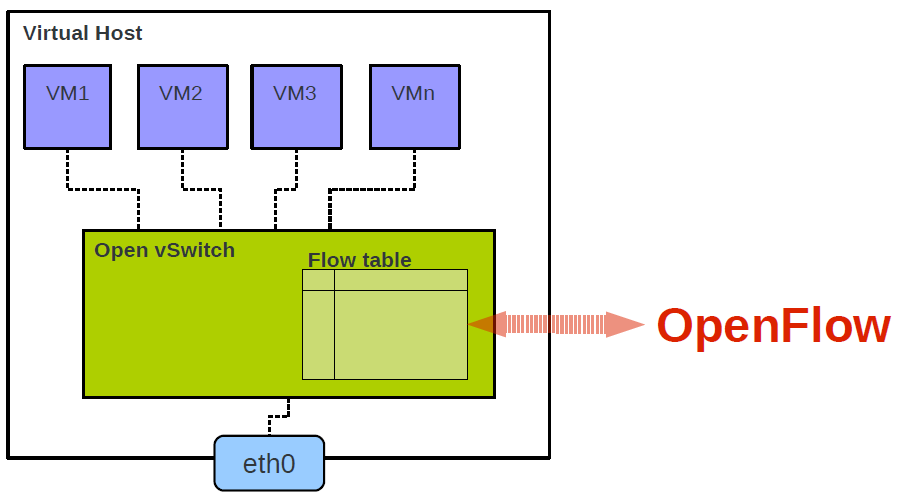 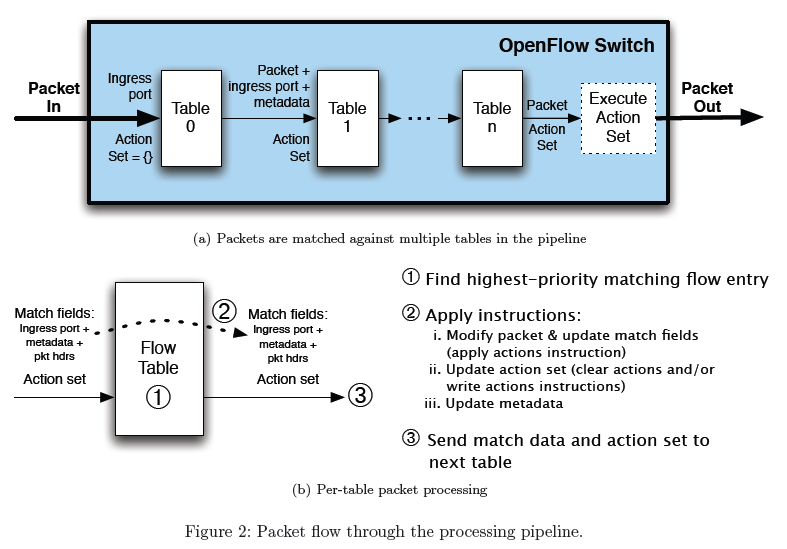 According to the OpenFlow protocol, a Flow Entry should consist of two parts.

If the packet matches the Match then the Action is executed.

Match Field parses network packets covering all layers of the TCP/IP protocol family, with the following fields to see if they can match a value.

The management of Flow Table by OvS is mainly done through the ovs-ofctl utility.