For Python based file, directory and path operations, we generally use the os.path module.

pathlib is its replacement, which is a wrapper around os.path, objectizing paths, making the api more general, easier to use, and more in line with programming habits.

The pathlib module provides a number of classes that use semantic representation of file system paths, which are suitable for a variety of operating systems. The path classes are divided into pure paths (which provide pure computational operations without I/O), and concrete paths (which are inherited from pure paths but provide I/O operations).

Let’s first look at the organization of the pathlib module, whose core is composed of 6 classes, the base class of which is the PurePath class, from which the other 5 classes are derived. 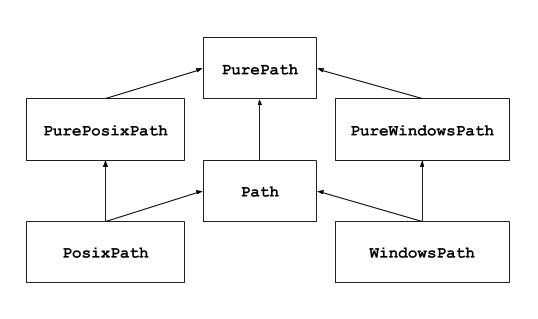 The arrows connect two classes with inheritance relationship, take PurePosixPath and PurePath class as an example, PurePosixPath inherits from PurePath, that is, the former is a subclass of the latter.

The three pure path classes PurePath, PurePosixPath and PureWindowsPath are often used in special cases, such as

The PurePath class (as well as the PurePosixPath class and the PureWindowsPath class) provide a number of constructors, instance methods, and class instance properties for us to use.

For example, the following statement is executed on a Windows system.

PurePath also supports passing in multiple path strings when creating objects, and they will be stitched together into a single path. Example.

As you can see, the output is a path in Windows platform format because the runtime environment is a Windows wipe o do system.

If you want to create UNIX-style paths in Windows, you need to specify the use of the PurePosixPath class, and vice versa. Example.

Emphasis: When you do pure path operations, you are actually operating on strings, which are not actually associated with the local file system and do not do any disk IO operations. paths constructed by PurePath are essentially strings, and can be converted to strings using str().

In addition, if you use the constructor of the PurePath class without passing any string parameters, it is equivalent to passing the point . (the current path) as an argument.

As an extra reminder, when constructing strings in Python, be sure to pay attention to the difference between forward/backward slashes when escaping and not escaping. and the use and non-use of r-native strings. Don’t ever write it wrong!

If the argument passed to the PurePath constructor contains an extra slash or . will be ignored outright, but .. will not be ignored.

The following is a list of methods and properties commonly used by PurePath instances.

More often than not, we use the Path class directly instead of PurePath.

Path is a subclass of PurePath. In addition to supporting various constructors, properties and methods provided by PurePath, it also provides methods to determine the validity of the path, and even determine whether the path corresponds to a file or a folder, and if it is a file, it also supports operations such as reading and writing to the file.

Path has 2 subclasses, PosixPath and WindowsPath, the role of these two subclasses is obvious and will not be repeated.

read_bytes() : reads the file in 'rb' mode and returns data of type bytes

write_bytes(data) : writes data to the file in 'wb' mode

read_text(encoding=None, errors=None) : Read the file with 'r' and return the text.

write_text(data, encoding=None, errors=None) : Write a string to the path corresponding to the file in 'w' way.

In pathlib, paths are stitched together by the stitching operator / in three main ways:

Decomposing paths is mainly done by the parts method.

Use match method for pattern matching and return True if successful.