PHP is simple, but it’s not easy to master. In addition to knowing how to use it, we also need to know how it works under the hood.

What is the purpose of understanding the underlying implementation of PHP? To use a dynamic language well, we must first understand it, the memory management and framework model is worth learning from, and we can optimize the performance of our programs by extending the development to achieve more and more powerful features.

PHP is a dynamic language for web development. To be more specific, it is a software framework that contains a large number of component modules implemented in C. It is a powerful UI framework.

In short; the PHP dynamic language execution process: after getting a piece of code, the source program is translated into individual instructions (opcodes) through lexical and syntactic parsing, and then the ZEND virtual machine executes these instructions in order to complete the operation. PHP itself is implemented in C, so the final calls are to C functions, so in effect we can think of PHP as a C-developed piece of software.

Although there are many source directories, the only core directories are sapi, main, zend, ext, and TSRM.

The input to PHP programs can be standard input from the command line, or network requests based on the cgi/fastcgi protocol. It can even be embedded in a microcontroller for C, C++ programs to call. They correspond to cli mode, fpm/cgi mode, embed mode, and in addition to these there are apache2handler, litespeed mode.

The sapi directory is an abstraction of the input and output layers, and is the specification for PHP to provide external services.

Similarly, the output can be written to the standard output of the command line or returned to the client as a network response based on the cgi/fastcgi protocol.

SAPI full name Server API, responsible for PHP external service specification, it defines the structure sapi_module_struct, the structure defines the mode start, shutdown, activation, expiration and so on many hook function pointers, each mode will these function pointers to their own function, it can easily extend the way of PHP external service. The above several modes are also the implementation of sapi_module_strcut to complete the multi-scenario application of PHP. 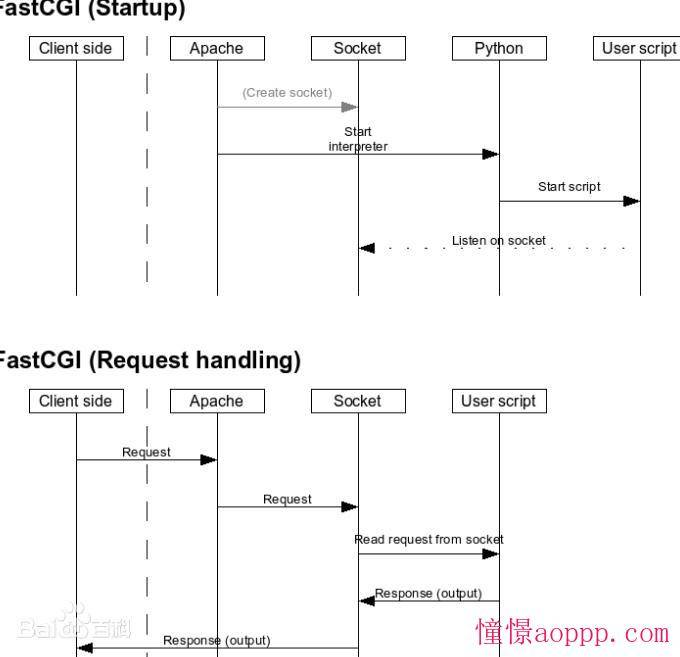 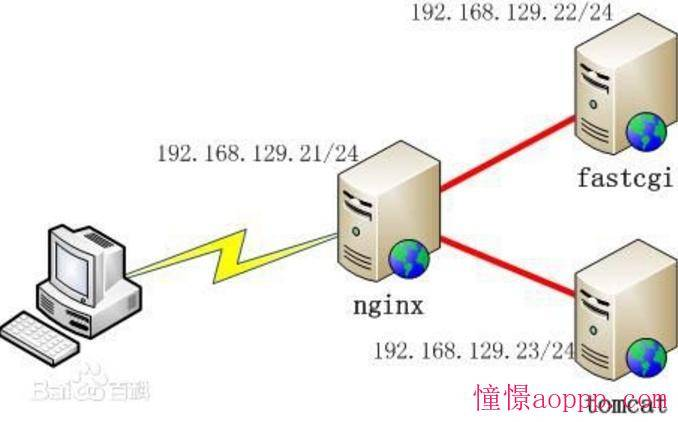 The main directory is the glue between the SAPI layer and the Zend layer.

The role of the main directory is to take requests from SAPI, parse out the script files and parameters to be executed, and initialize the environment and configuration, such as initializing variables and constants, registering functions, parsing configuration files, loading extensions, etc. 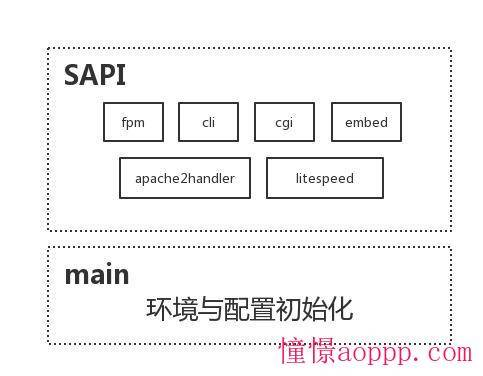 The Zend engine is the kernel part of php, which translates php code into executable opcode processing and implements the corresponding processing methods, basic data structures, memory allocation management, etc. It consists of two parts: the compiler and the executor.

The compiler is responsible for the lexical and syntactic analysis of the PHP code, and generates an abstract syntax tree, which is then further compiled into opcode, opcode is the instruction recognized by the Zend virtual machine, php7 has 173 opcodes in total, and all the syntax is composed of these opcodes. The executor is responsible for executing the opcode output by the compiler. 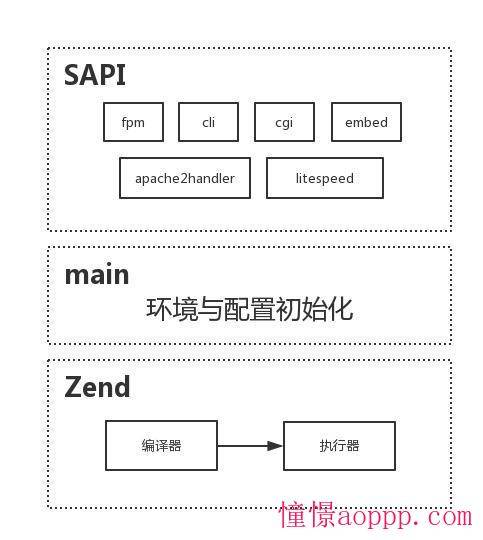 ext(extension), which is a way to extend the function of PHP kernel, divided into PHP extension and zend extension, both support user-defined development, both are more common, PHP extensions are gd, json, date, array, etc., and the familiar opcache is Zend extension. 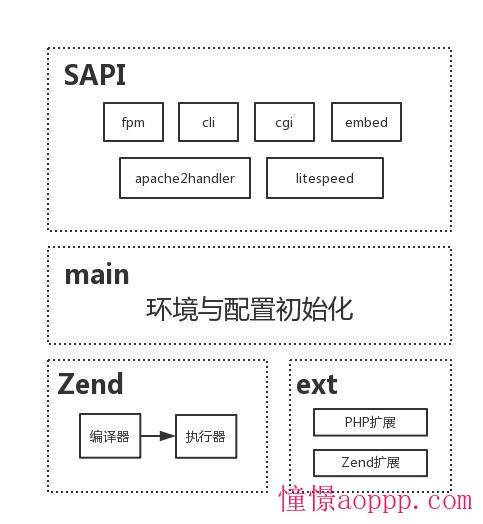 A global variable is a variable defined outside a function, it is a public resource, in a multi-threaded environment, access to public resources may cause conflicts, TSRM is born to solve the problem.

The main purpose of TSRM is to ensure the safety of shared resources, and PHP’s thread safety mechanism is simple and intuitive - in a multi-threaded environment, each thread is provided with a separate copy of the global variable. This is implemented by allocating (locking before allocation) an independent ID (self-incrementing) to each thread via TSRM as an index to the current thread’s global variable memory area, enabling complete independence between threads for subsequent global variable access.

Most of the PHP SAPIs are single-threaded, so there is not much need to pay attention to thread safety, but in the case of Apache or the user’s own implementation of the PHP environment, it is necessary to consider thread safety.

The php dynamic language execution process: after getting a piece of code, the source program is translated into individual instructions (opcodes) through lexical and syntactic parsing, and then the Zend virtual machine executes these instructions sequentially. php itself is implemented in c, so the final calls are to c functions, so in effect, we can think of php as a piece of software developed in c.

The core of php execution is the translated directives (opcode), which are the basic unit of php program execution.

There are several common processing functions.

HashTable is the core data structure of Zend, it is used to implement almost all common functions in PHP, we know PHP array is its typical application, in addition, inside zend, such as function symbol table, global variables, etc. are also based on hash table with the following features.

Zend hash table implements the typical hash table hash structure, and provides forward and reverse traversal of arrays by attaching a two-way chain table. The structure is shown in the following figure.

As you can see: in hash table there is both a hash structure in the form of key->value and a bidirectional linked table model, which makes it very convenient to support fast lookup and linear traversal. 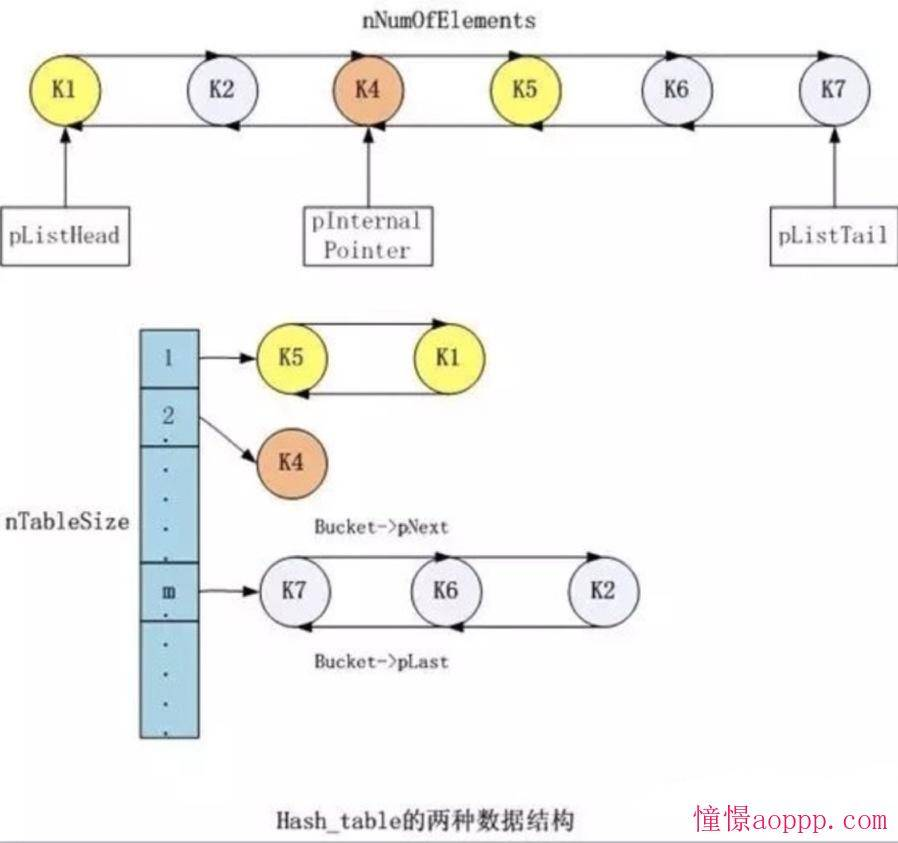 Index arrays are our common arrays, accessed by subscripts. For example: $arr[0], zend hashtable is internally normalized, and for index type key is also assigned hash value and nKeyLength (to 0). The internal member variable nNextFreeElement is the maximum id currently assigned, which is automatically added to one after each push. It is this normalization process that allows PHP to achieve a mix of associative and non-associative. Due to the special nature of the push operation, the order of index keys in the PHP array is not determined by the subscript size, but by the order of push. For example, $arr[1] = 2; $arr[2] = 3; for a double type key, Zend hashtable will treat him as an index key.

PHP is a weakly typed language that does not strictly distinguish between the types of variables itself. PHP does not require a type to be specified at the time of variable declaration.

PHP may perform implicit conversions of variable types during program runtime. As with other strongly typed languages, explicit type conversions may be performed in programs.

PHP variables can be classified as simple types (int, string, bool), collection types (array resource object) and constants (const). All of the above variables have the same structure at the bottom zval.

Zvalue is used to store the actual data of a variable. Because of the need to store multiple types, zvalue is a union, and thus implements weak types.

The correspondence between the php variable type and its actual storage is as follows.

Common string splicing methods and speed comparison. Suppose there are 4 variables as follows.

Now a comparison and explanation of several character splicing methods as above.

PHP arrays are implemented naturally via zend hashtable. how is foreach operation implemented?

In Zval, for resource, lval is used as a pointer to the address where the resource is located. resource can be any composite structure, we are familiar with mysqli, fsock, memcached, etc. are all resources.

How to use resources

A resource can persist for a long time, not just after all the variables that reference it have gone out of scope, but even after a request has ended and a new one has been made. These resources are called persistent resources because they persist through the entire lifecycle of SAPI, unless they are intentionally destroyed. In many cases, persistent resources can improve performance to some extent. For example, in the common case of mysql_pconnect, persistent resources are allocated via pemalloc so that they are not freed at the end of the request. For zend, there is no distinction between the two per se.

How local and global variables are implemented in PHP