In a nutshell: In skyzh/uring-positioned-io, I wrapped the underlying io_uring interface provided by Tokio and implemented io_uring based asynchronous random file reading in Rust. You can use it like this.

This article introduces the basic use of io_uring, then describes the implementation of an asynchronous read file library I wrote, and finally does a benchmark to compare performance with mmap.

io_uring is an asynchronous I/O interface provided by the Linux kernel. It was introduced in Linux 5.1 in May 2019 and is now used in various projects. For example.

In database systems, we often need multiple threads to read the contents of a file at any location (<fid>, <offset>, <size>). The often used read / write API cannot do this (because it has to seek first and needs an exclusive file handle). The following method allows for random reads of files.

However, both of these options block the current thread. For example, if a page fault occurs after mmap reads a block of memory, the current thread will block; pread itself is a blocking API. Asynchronous APIs (e.g. Linux AIO / io_uring) can reduce context switching and thus improve throughput in some scenarios.

The io_uring related syscall can be found at here. The liburing provides an easier-to-use API. Tokio’s io_uring crate builds on this by providing a io_uring API for the Rust language. language’s io_uring API. Here is an example of how to use io_uring.

To use io_uring, you need to create a ring, and here we use the concurrent API provided by tokio-rs/io-uring, which supports multiple threads using the same ring.

Each ring corresponds to a commit queue and a completion queue, where the queue is set to hold up to 256 elements.

You can construct a read file task with opcode::Read, and add the task to the queue with ring.submit().push(entry).

Once the task has been added, commit it to the kernel.

In this way, we implement random reads of files based on io_uring.

io_uring currently has three execution modes: default mode, poll mode and kernel poll mode. If you use kernel poll mode, you do not necessarily need to call the function that commits the task.

Our goal is to implement an interface like this, wrapping io_uring and exposing only a simple read function to the developer.

After referring to tokio-linux-aio for asynchronous wrapping of Linux AIO, I used the following method to implement io_uring based asynchronous reads.

The whole process is shown in the following figure. 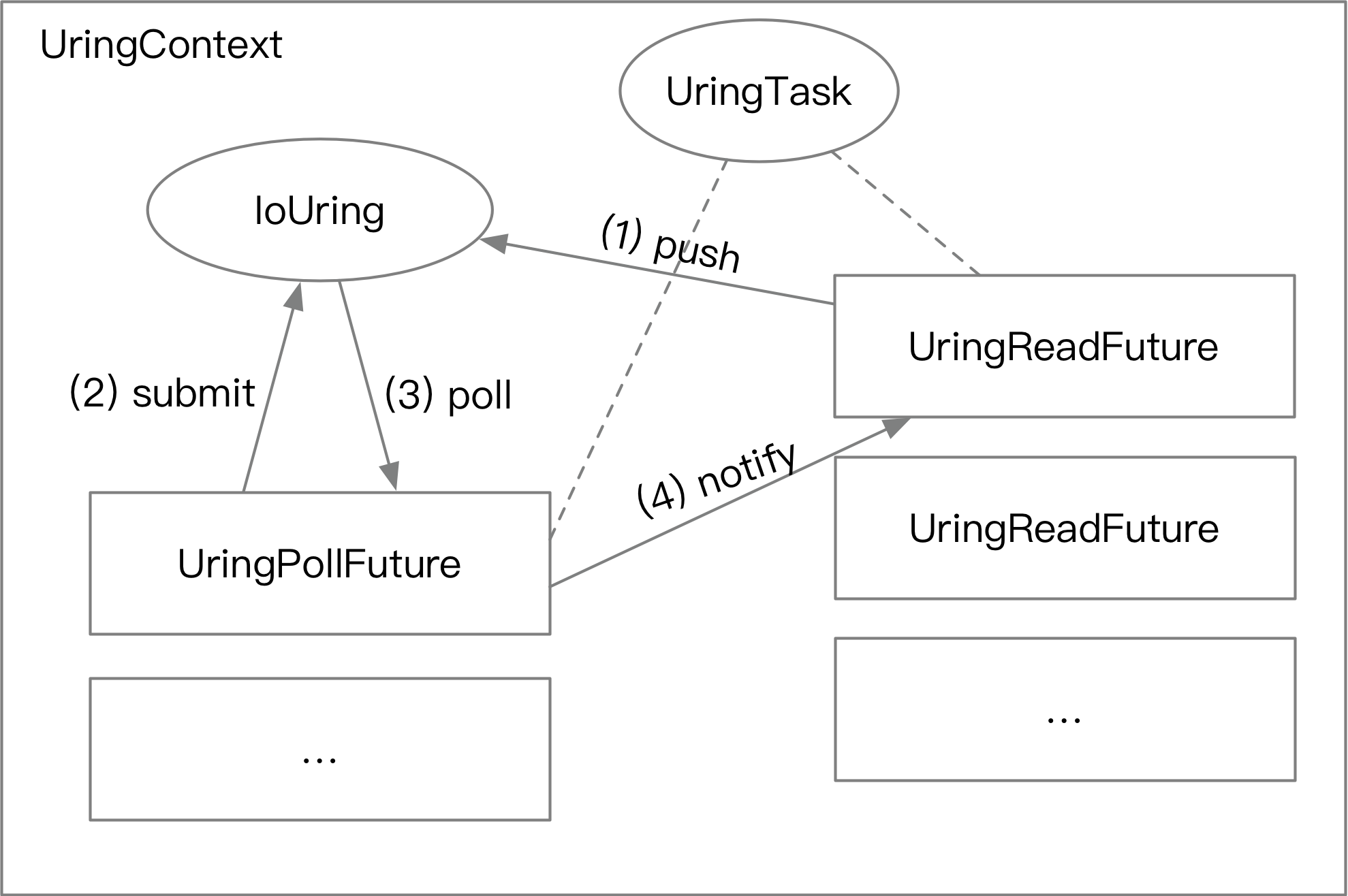 This makes it easy to call io_uring to read the file asynchronously. This also has a side benefit: task commits can be automatically batching. Normally, an I/O operation would generate a syscall, but since we use a single Future to commit and poll tasks, there may be multiple uncommitted tasks in the queue at commit time, and they can all be committed at once. This reduces the overhead of syscall context cutting (and of course increases latency). From the benchmark results, we can see that each commit can pack about 20 read tasks.

Compare the performance of wrapped io_uring with that of mmap. The test load is 128 1G files with random read aligned 4K blocks. My computer has 32G of RAM and a 1T NVMe SSD. 6 cases were tested as follows.

Found that mmap is far superior to io_uring. Well, it’s true that this wrapper is not very good, but it’s barely usable. Here is a heatmap with one minute latency, each set of data is presented in the order of mmap first and then io_uring. 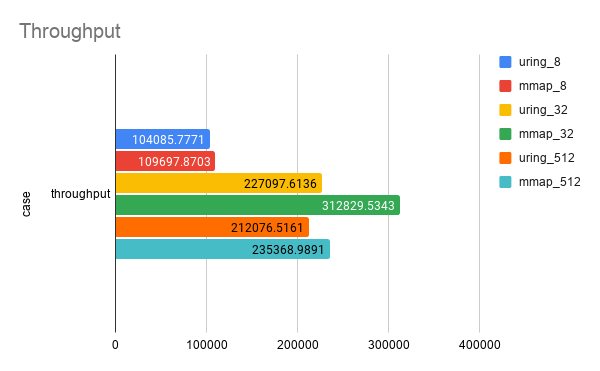 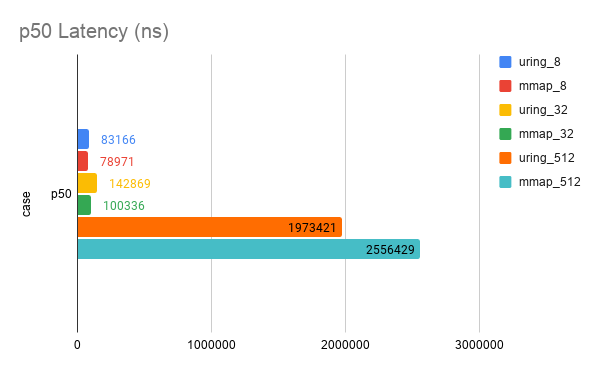