Memory, as the most basic hardware resource of a computer, has a very special position. We know that the CPU can directly access very few storage resources, only: registers, memory (RAM), ROM on the motherboard.

The registers are very, very fast to access, but are so few in number that most programmers do not deal with them directly, but rather the compiler of the programming language automatically selects registers as needed to optimize the performance of the program.

So you can see that memory is in a very special position, it is the only basic resource that the CPU has built-in support and that the programmer will deal with directly.

The whole process of computer operation 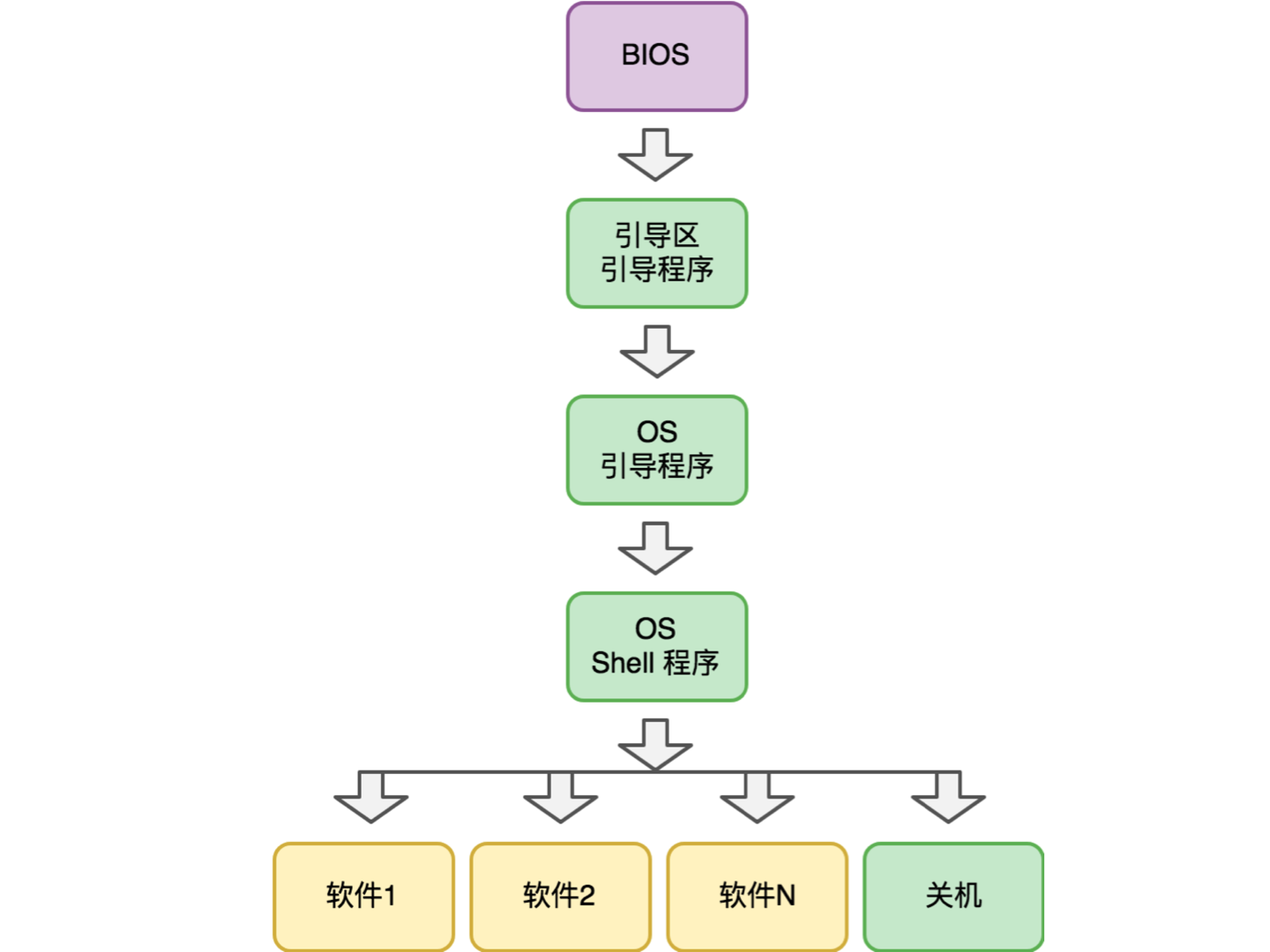 Each sub-process of the entire “computing “ process has its own explicit considerations.

First of all, the BIOS program is not solidified in the CPU, but placed independently on the ROM of the motherboard, because the input and output devices of computers in different historical periods are very different, there are keyboard + mouse + monitor, touch screen, and pure voice interaction, external storage is floppy, hard disk, flash memory, these changes we can cope with by adjusting the BIOS program, without the need to modify the CPU.

The OS bootloader, then, is the real start of external storage taking over control of the computer. Here OS stands for Operating System. This is where the operating system gets to work. There are many, many things that happen in this process, which we’ll skip here. But eventually, after all the initialization is done, the OS hands over the execution to the OS Shell program.

During this period, the way to start a software was to type a command line into a shell program, and the shell was responsible for interpreting the command line to understand the user’s intent, and then starting the appropriate software. In the GUI era, starting software in the shell became a matter of clicking the mouse or moving a finger (touch screen), and the interaction paradigm was much simplified.

After understanding the entire process of computer boot-up to shutdown, you may soon realize that there is a critical detail that is not explained: how does the computer run the software on external storage?

This has to do with memory management.

In conjunction with the role of memory, we talk about memory management and only need to talk clearly about two issues.

Before answering these two questions, let’s understand a little background: the real mode and the protected mode of the CPU. These two modes are completely different in the way the CPU operates on memory. In real mode, the CPU accesses memory directly through physical addresses. In protected mode, the CPU translates virtual memory addresses into physical memory addresses through an address mapping table, and then reads the data.

The memory has a global interrupt vector table, which is essentially a bunch of function addresses in a place that everyone recognizes. For example, if the keyboard presses a key, it will trigger interrupt number 9. When the CPU receives an interrupt request, it stops what it’s doing to respond to the interrupt request (goes to the interrupt vector table, finds the function address corresponding to item 9 and executes it), and then goes back to what it was doing when it’s done.

So, how does the OS run software on external storage (like a hard drive) in real mode?

Quite simply, it reads the complete software from the external storage into memory and then executes it. However, before execution it does one thing, it fixes the floating address. Why is there a floating address? Because the software does not know where it will be when it is not loaded into memory, so there are many addresses involving data and functions that cannot be fixed and have to be determined when the OS loads it into memory.

But there are two problems with real mode.

One of them is security. The operating system and all software running together can modify each other’s data and even program instructions at will, so it is very easy to do damage.

The second is that the software supported low complexity , while the number of software that can be run is small.

On the one hand, the more complex the software is, the more code it has, the more storage space it needs, and it may even appear that the size of a single piece of software exceeds the available memory of the computer, which then can not execute it in real mode.

On the other hand, even if a single piece of software can run, once we have several more running at the same time, the memory requirements of the operating system increase dramatically. Compared to the memory demand of so many software combined, the memory storage space is often still insufficient.

But why do we usually open new software without any fear of running out of memory?

Of course, it is possible that the physical memory address corresponding to a memory page does not exist yet, and this is called a missing page, so the data cannot be read. In this case, the CPU will initiate a missing page interrupt request. 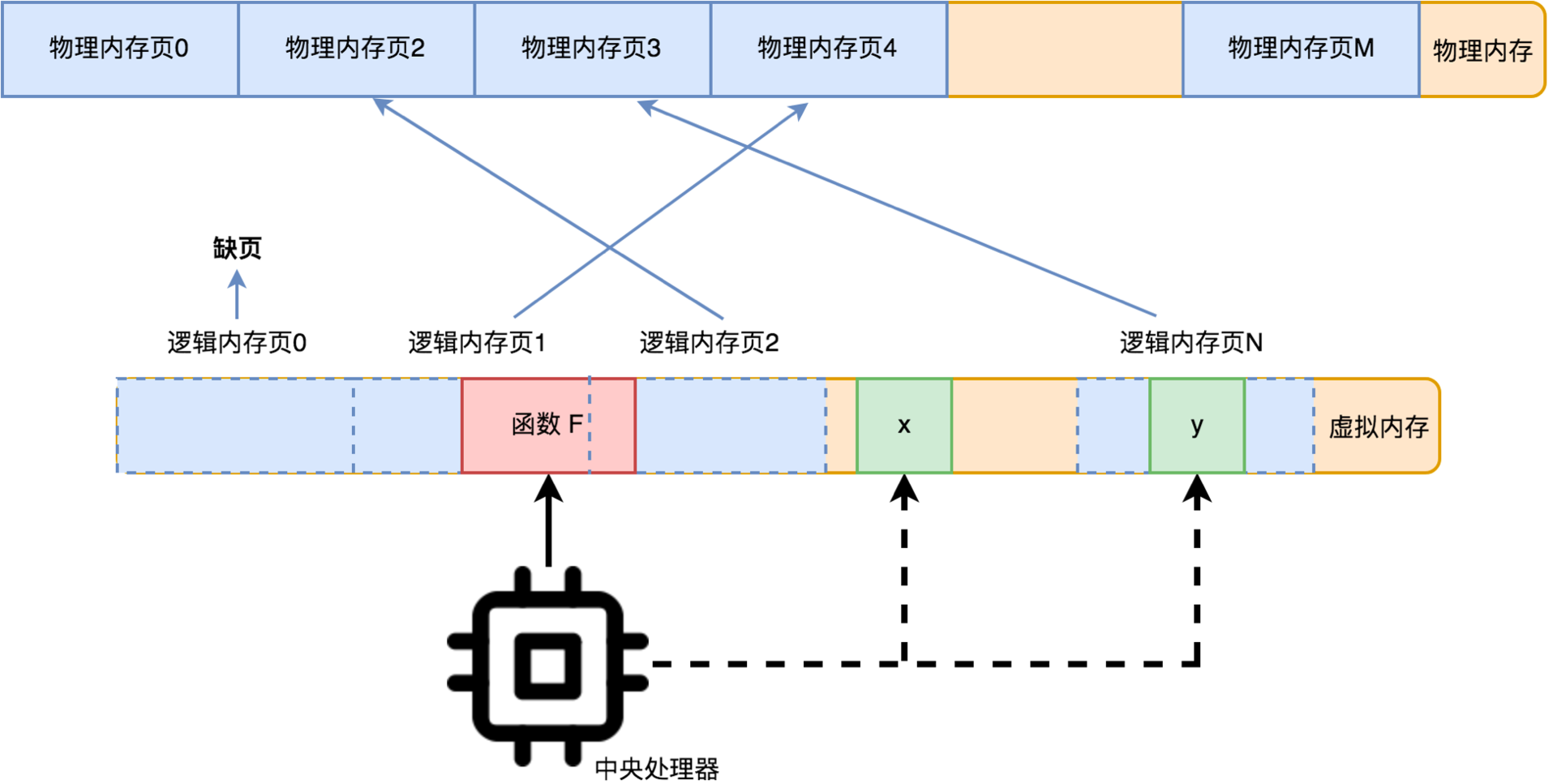 Of course, the data of this memory page is saved before elimination (for unix-based systems it is often a swap partition; for windows it is a .swp file with hidden attributes.) The next time the CPU accesses the obsolete memory page, a missing page interrupt will occur and the OS will have to recover the data.

With this virtual memory mechanism, the operating system does not need to load the entire software into memory right from the start, but loads the corresponding program code fragments on demand via page-out interrupts. The problem of running multiple software programs at the same time is also solved. When memory is not enough, the longest unused memory pages are eliminated to free up physical memory.

Actually, the problem of memory allocation is also solved, without any additional mechanism. The memory address space is virtual anyway, and the OS can allocate a super large amount of memory to the software it wants to run right from the start, and you can use it however you want. If the software doesn’t use a memory page, nothing happens. Once the software uses a memory page, the operating system allocates real physical memory to it through a page-out interrupt.

By introducing virtual memory and its out-of-page mechanism, the CPU has solved the relationship between the operating system and the software very well.

Each running piece of software, let’s call it a process, has its own address mapping table. That is, the virtual addresses are not global, but rather each process has a separate virtual address space of its own.

In protected mode, one of the things that the computer’s infrastructure system and the operating system are working together to do is to make each piece of software “feel” like it is monopolizing the resources of the entire computer. The independent virtual address space camouflages this nicely: it looks like I’m enjoying all the memory resources alone. The problem of floating addresses in real mode is also solved by the fact that software can assume what the absolute address of its own code is for loading, and does not need to readjust the address of CPU instruction operations at load time.

This is very different from real mode. In real mode, all processes are in the same address space in physical memory, and they can access each other’s data, modify or even destroy each other’s data, and thus cause other processes (including those of the operating system itself) to crash. Memory is the basic resource for process operation, and keeping the process basic resources independent is the most basic requirement of software governance. This is the reason why protection mode is called “protection” mode.