Taskfile describes various execution tasks via yaml, and its core is written in go; it is more modern and easier to use than Makefile’s tab splitting and bash combination syntax (although it becomes a yaml engineer). Taskfile has advanced features such as built-in dynamic variables, operating system and other environment variable recognition that are more in line with the modern way of Coding.

In general, if you are not familiar with Makefile and expect to do some batch tasks with a Makefile-like tool, Taskfile is easier to get started with, has a lower learning curve and is fast enough compared to Makefile.

For mac users, there is an official brew installation method.

For Linux users, there are official installation packages for some Linux distributions, but since there is only one binary file, there is also an official quick install script.

If you already have a local Go language development environment, you can install it directly via the go command.

After installation, you just need to write a yaml file Taskfile.yml, and then you can run the corresponding task via task command. 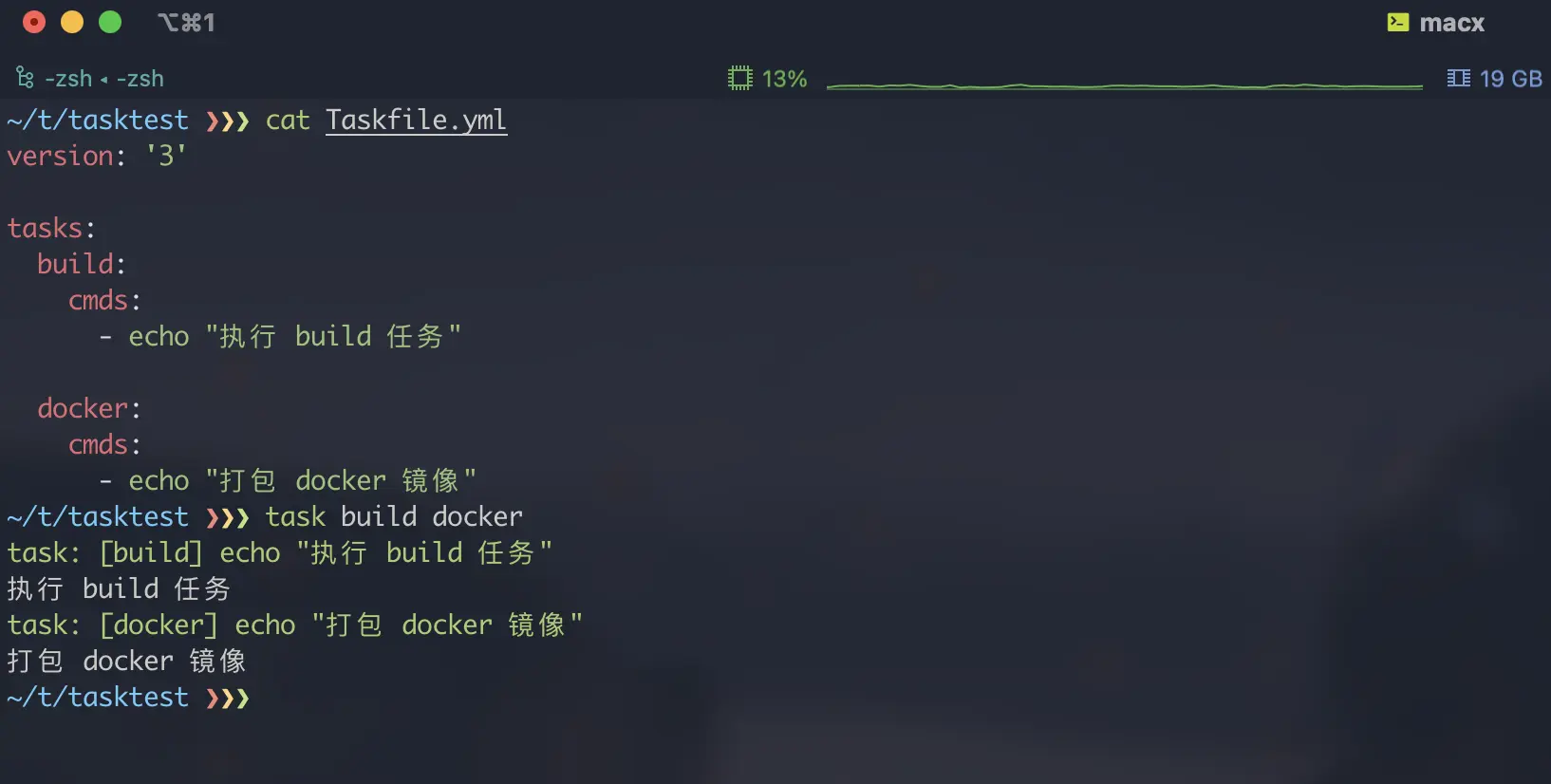 If you want to set a default task, just create a task with the name default. 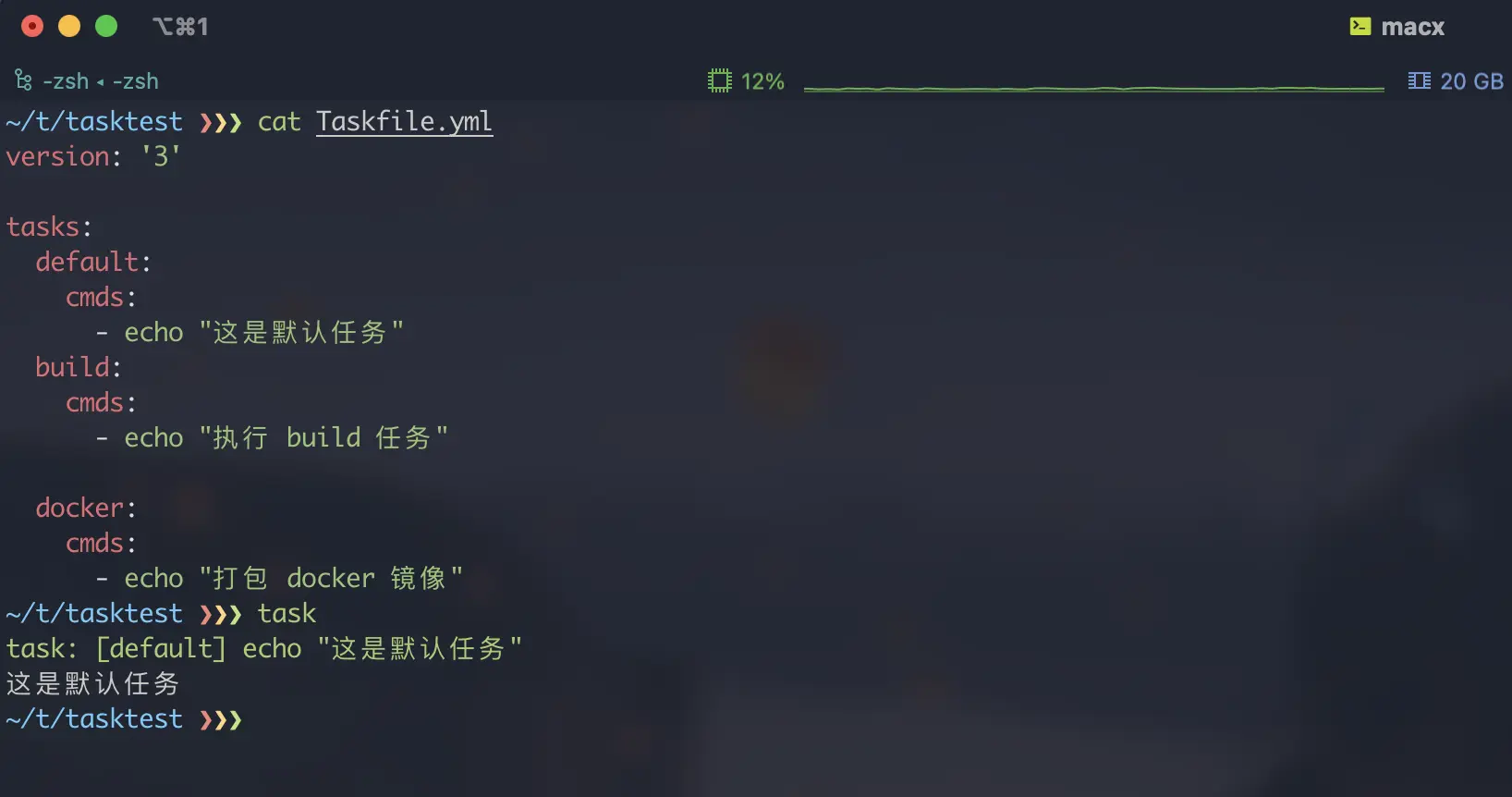 Environment variables can also be defined in the Taskfile. 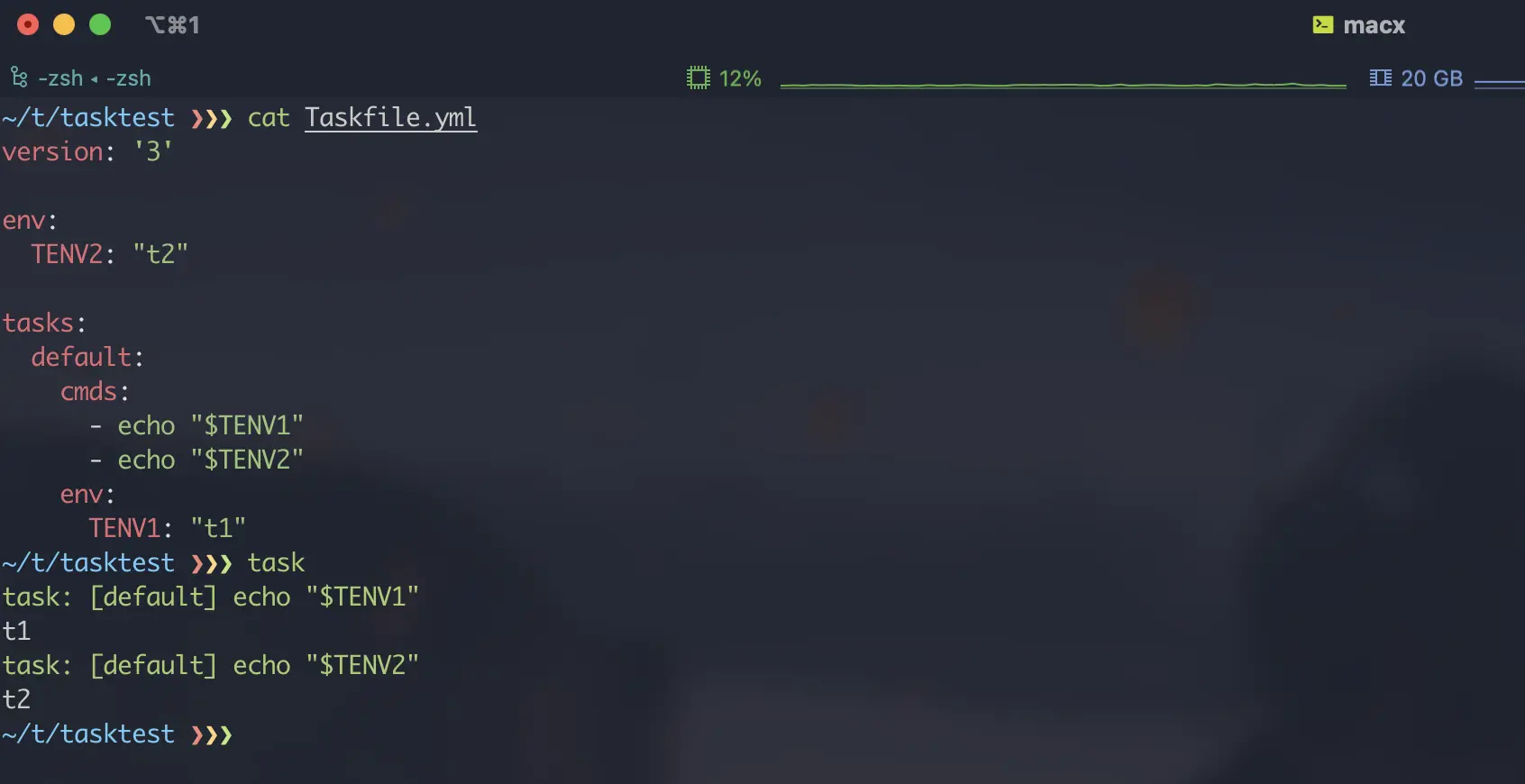 In addition to this direct reference to variables, Taskfile also supports reading env files to load environment variables like docker-compose; Taskfile will load .env files in the same directory by default, or you can configure specific files within Taskfile with the dotenv command.

In addition to the standard environment variables, Taskfile has a built-in, more widely used enhanced variable vars; this variable mode can be read by go’s template engine (interpolated references), and has special features that environment variables do not have. The following is an example of a vars variable.

In addition to the above use of environment variables, vars also supports dynamic definitions; For example, if we want to get the current git commit id every time a task is executed, we can use the dynamic definition feature of vars.

The vars variable also has some special predefined variables built in, such as {{.TASK}} which always indicates the current task name, {{.CLI_ARGS}} which references command line input, etc..

If you run task yarn -- install, then the {{.CLI_ARGS}} value will become install and the yarn install command will be executed.

In addition, vars variables have other features, such as the ability to pass overrides when referencing across tasks, which will be described later.

The task defined in Taskfile is executed in the current directory by default, if you want to execute in another directory, you can set the execution directory directly by configuring the dir parameter instead of writing commands like cd manually.

In CI environments, we often need to define the order of execution and dependencies of tasks; Taskfile provides support for task dependencies through deps configuration.

When we define multiple tasks in Taskfile, it is likely that some tasks have some similarity, so we can define Template Task by calling each other and dynamically overriding vars variables. 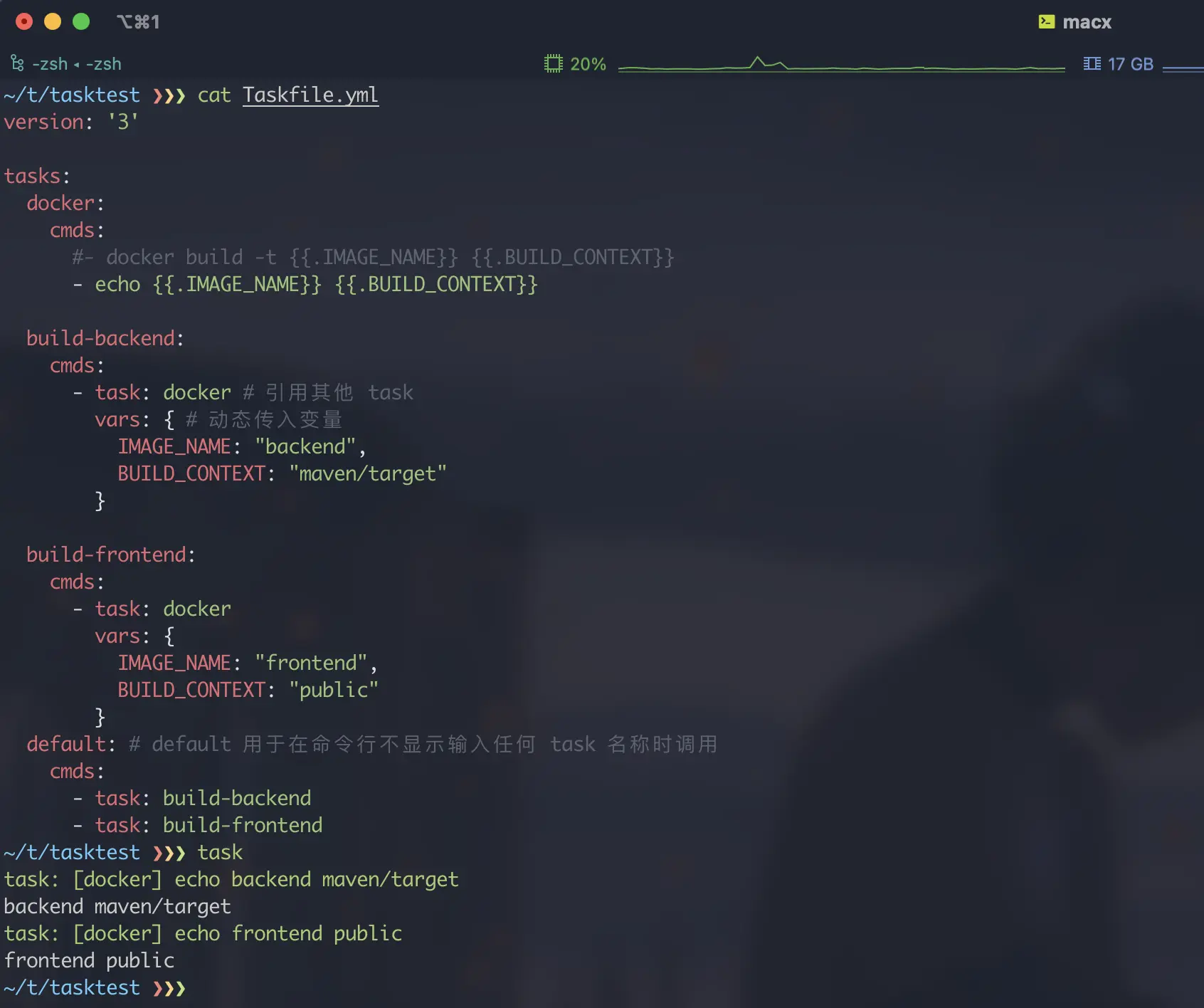 Taskfile supports importing other Taskfiles via the includes keyword to facilitate the structured processing of Taskfile. 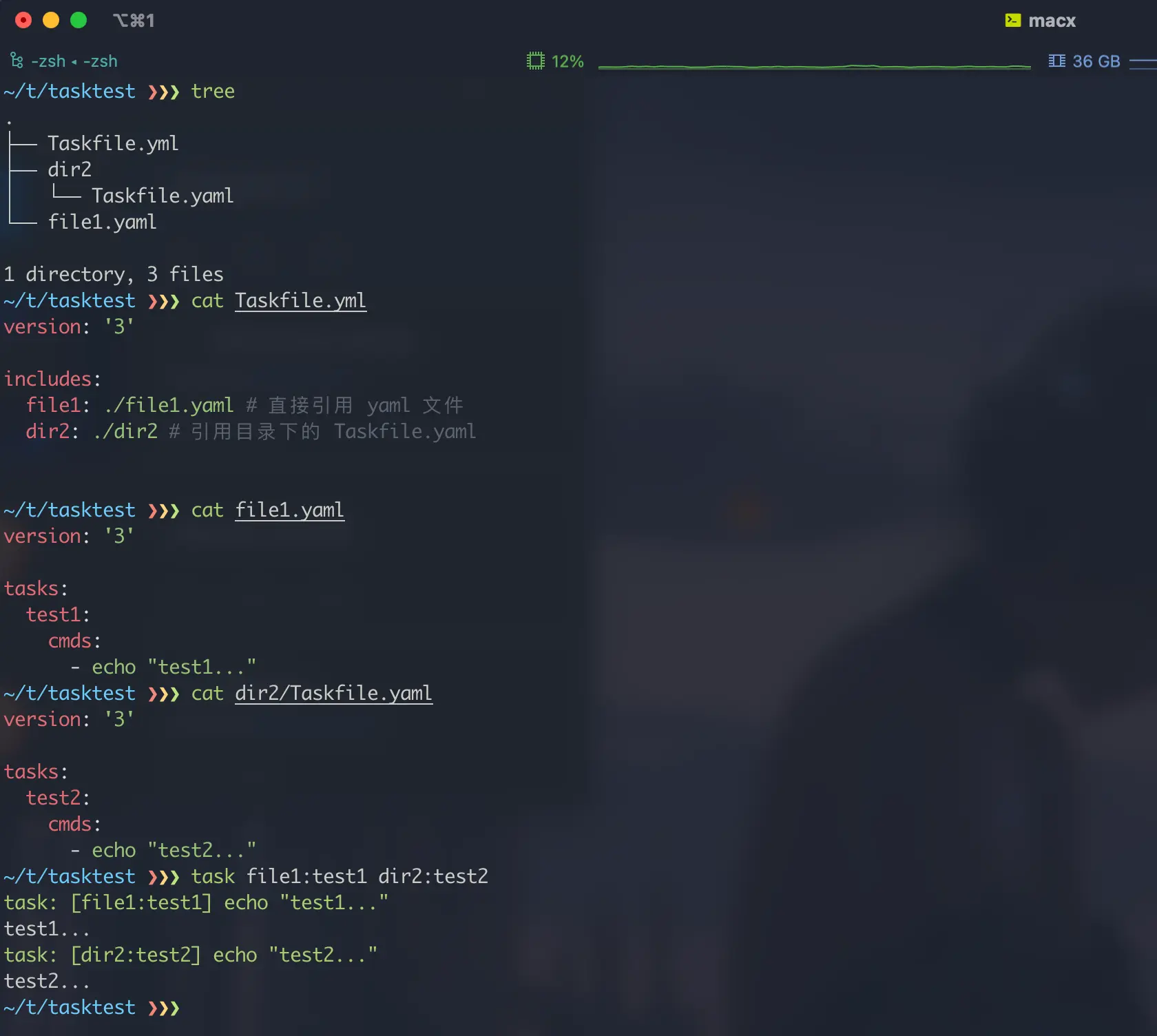 When introducing other Taskfiles, by default the commands will be executed in the current main Taskfile directory, but we can also use the dir parameter to control the execution of tasks in the introduced Taskfile in a specific directory. 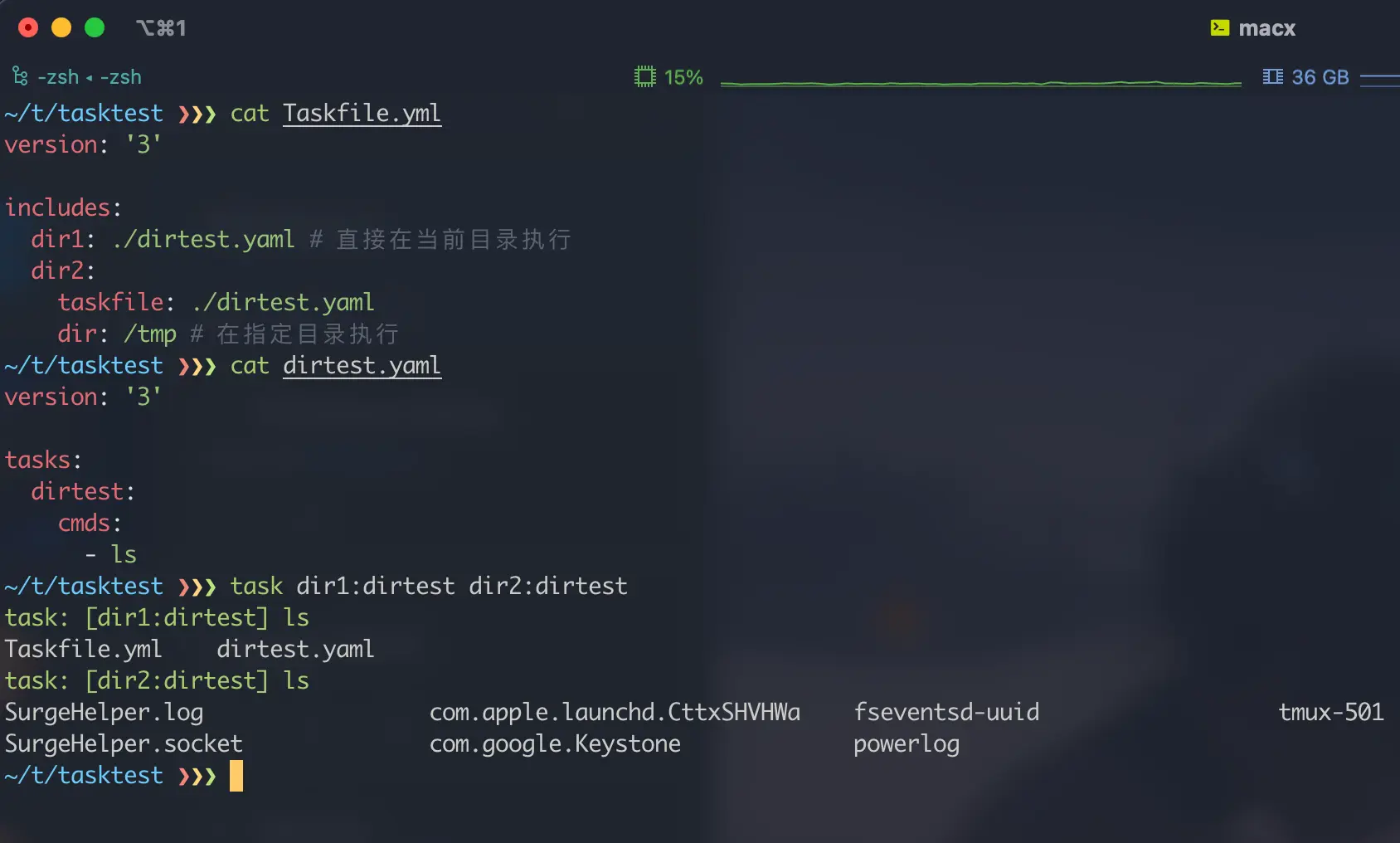 Anyone familiar with the go language should know that go has a handy keyword defer; this directive is used to define actions to be performed at the end of the final code, such as resource cleanup. Taskfile also supports this directive, which allows us to complete some cleanup operations during task execution.

Of course, in addition to writing commands directly, the defer command can also reference other tasks to complete cleanup.

At some point, we may expect to cache some tasks, for example, not to run the download repeatedly if the file has already been downloaded; for this need, Taskfile allows us to define the source file and the generated file, and determine whether the task needs to be executed by the hash value of this set of files. 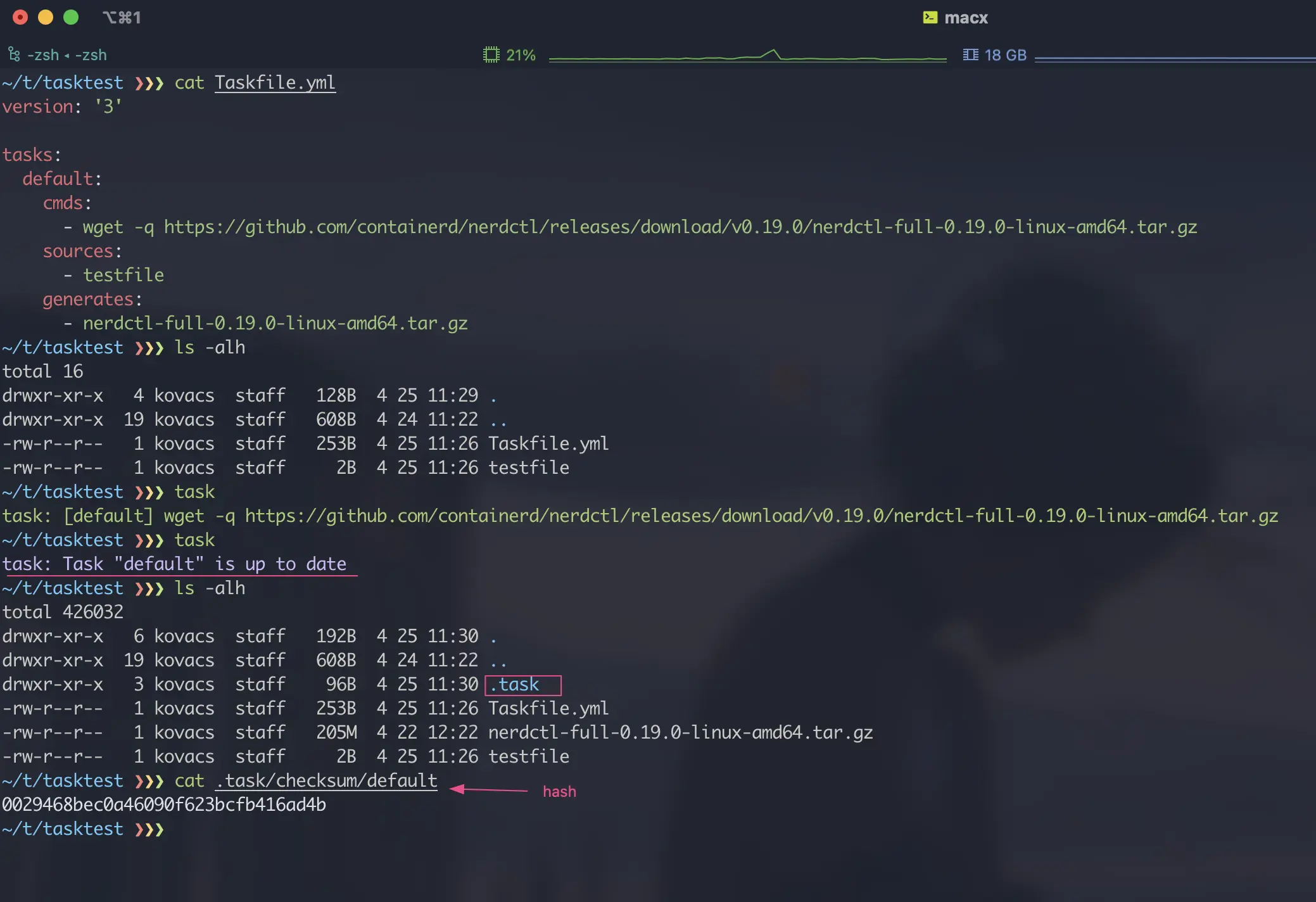 As you can see from the above diagram, when a task is executed for the first time, a .task directory is generated, which contains the hash value of the file; when the task is executed repeatedly, the real task is not really executed if the hash value does not change. Taskfile has two types of file detection by default: checksum and timestamp. checksum performs hash detection of files (default), which only requires defining sources configuration; timestamp performs timestamp detection of files, which requires defining both sources and generates configuration .

In addition to the two built-in detection modes, we can also define our own detection commands via the status configuration. If the command execution result is 0, the file is considered up-to-date and no task needs to be executed.

The above output detection is used to detect the results of the files generated by the task, etc. In some cases we may want to determine a condition before running the task, to determine if the task needs to be run without executing it at all; in this case we can use the preconditions configuration directive.

The use of the stencil engine has been shown in the variables section above. Taskfile actually integrates with the slim-sprig library. This library provides a number of convenient methods that can be used within the template engine.

Please refer to the Go Template documentation and the slim-sprig documentation for details on these methods and the use of the template engine.

For more details on the use of Taskfile, please read its official documentation, and I will not go into too much detail in this article.