Most of the introductory articles on netfilter describe only abstract concepts, but the basic implementation of the kernel code is not too complicated. This article mainly refers to the Linux kernel code version 2.6 (earlier versions are simpler), which may differ significantly from the latest version 5.x, but the basic design has not changed much and does not affect the understanding of its principles.

This article assumes that the reader already has a basic understanding of the TCP/IP protocol.

The packet processing path in the kernel, i.e. the chain of kernel code calls for processing network packets, can be broadly divided into multiple layers according to the TCP/IP model, taking the reception of an IPv4 tcp packet as an example.

Let’s get down to business. The primary component of netfilter is netfilter hooks.

For different protocols (IPv4, IPv6 or ARP, etc.), the Linux kernel network stack triggers the corresponding hooks at predefined locations along the packet processing path of the protocol stack. The locations of the trigger points in the different protocol processing flows and the corresponding hook names (in bold outside the blue rectangle) are listed below, with a focus on the IPv4 protocol. 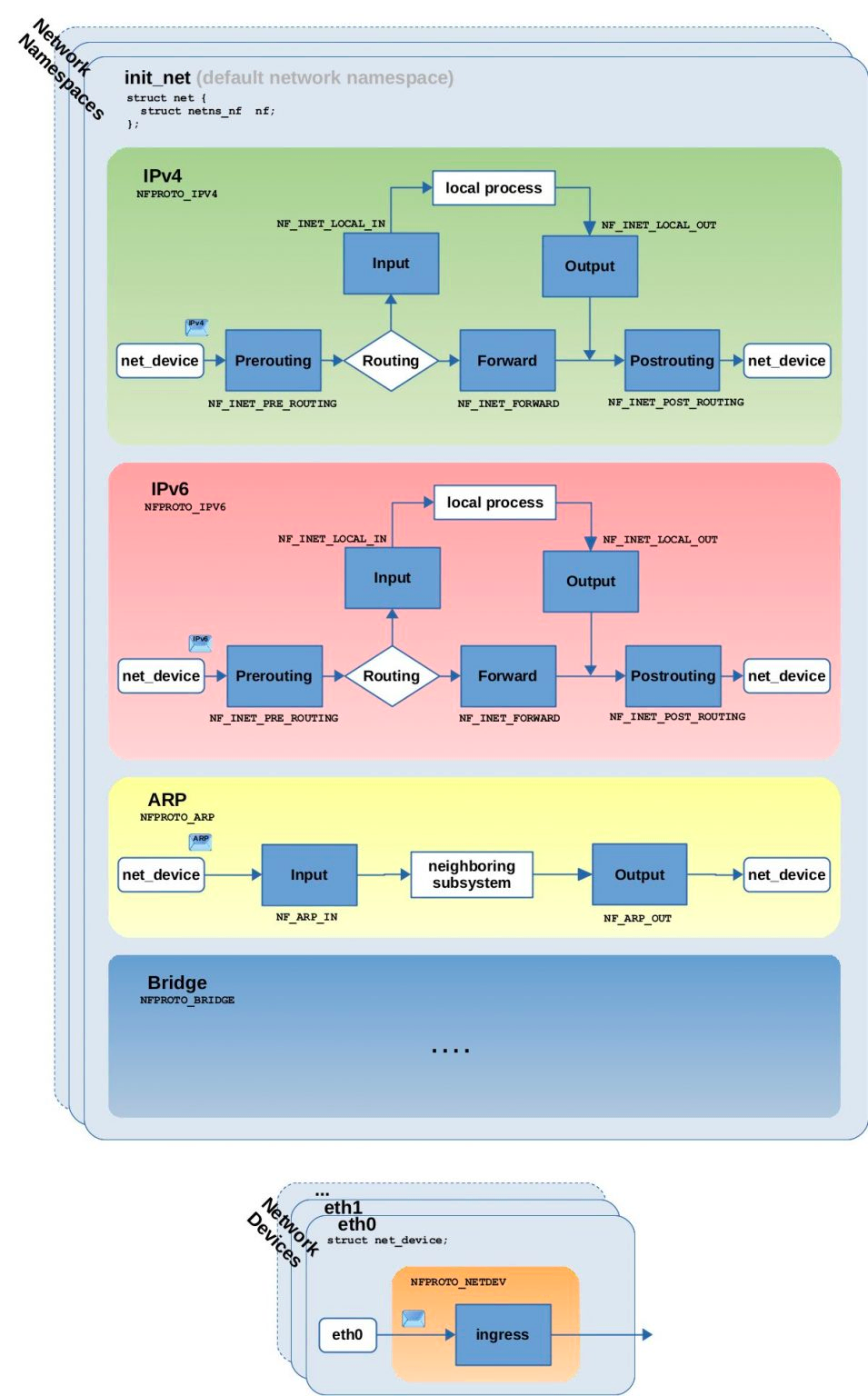 The so-called hooks are essentially enumerated objects in the code (integers with values incrementing from 0).

Each hook corresponds to a specific trigger point location in the kernel network stack, for example, the IPv4 stack has the following netfilter hooks definition. 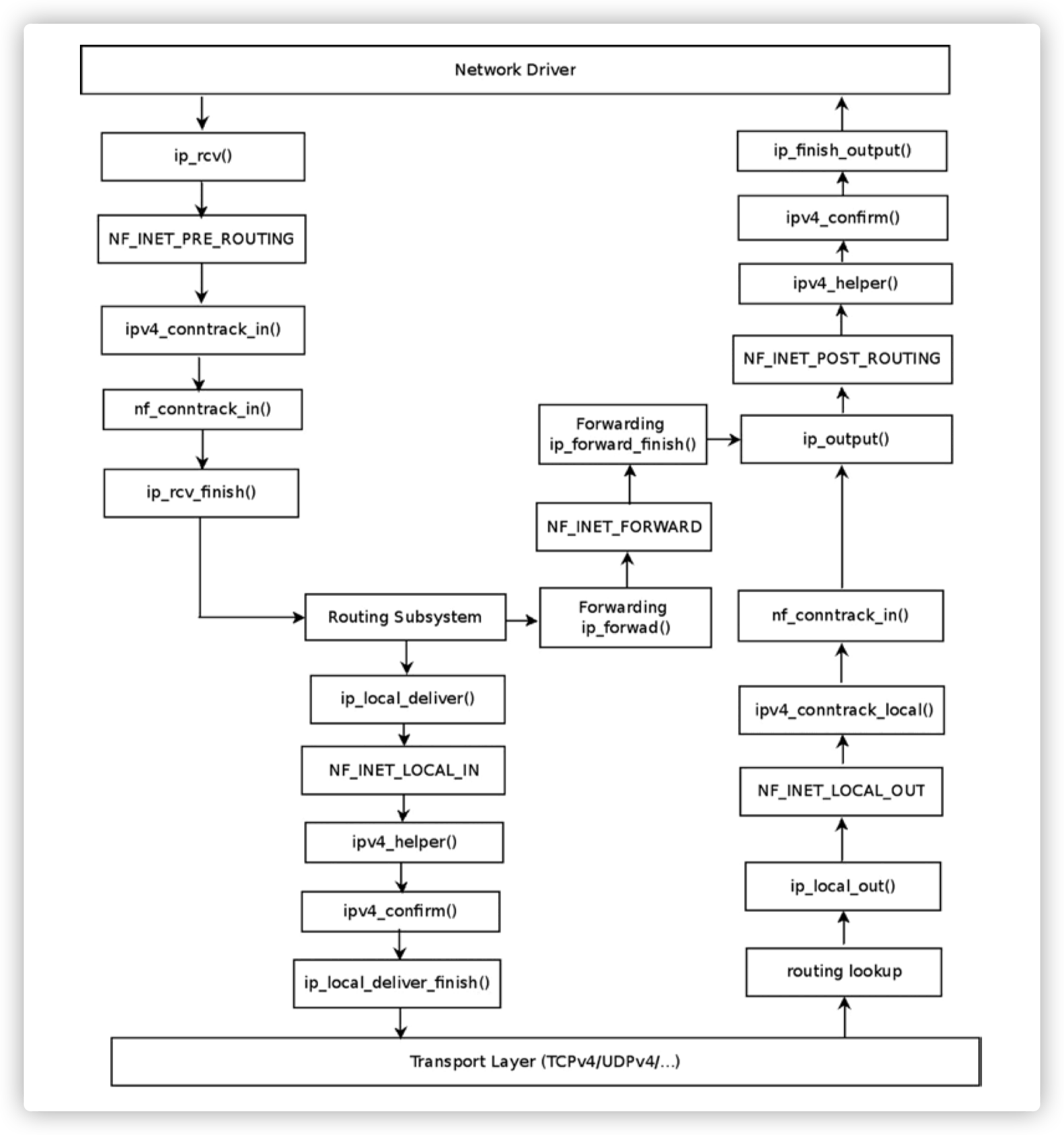 The macro NF_HOOK is called uniformly for all trigger point locations to trigger the hook.

The parameters received by NF-HOOK are as follows.

The return value of NF-HOOK is one of the following netfilter vectors with a specific meaning.

Going back to the source code, the IPv4 kernel network stack calls NF_HOOK() in the following code module. 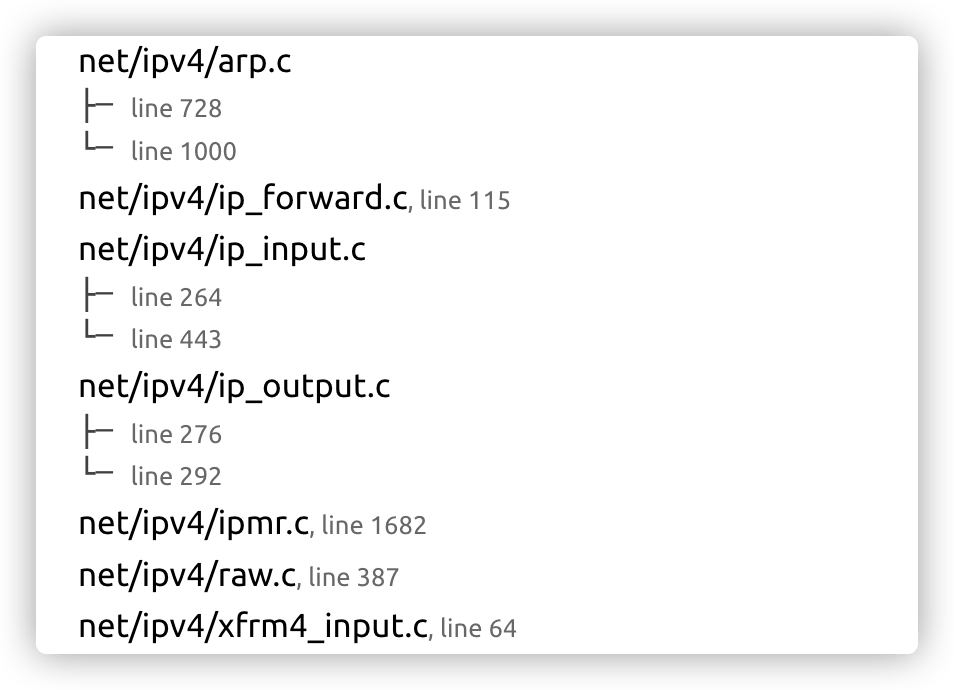 The actual call is based on the source code of net/ipv4/ip_forward.c for packet forwarding, where the NF_HOOK macro is called at the end of the ip_forward function on line 115 with the NF_INET_FORWARD hook as an input. The next function in the network stack, ip_forward_finish, is passed in as an okfn argument.

Another component of netfilter is the hook callback function. The kernel network stack uses both hooks to represent specific trigger locations and hooks (of integer values) as data indexes to access callback functions corresponding to trigger points.

To register a callback function for a hook, first define a nf_hook_ops structure (or an array of such structures), which is defined as follows.

There are 3 important members in the definition.

After defining the structure, one or more callback functions can be registered by int nf_register_hook(struct nf_hook_ops *reg) or int nf_register_hooks(struct nf_hook_ops *reg, unsigned int n); respectively. All the nf_hook_ops under the same netfilter hook are registered to form a Linked list structure in order of priority, and the registration process will find the appropriate position from the Linked list according to the priority, and then perform the Linked list insertion operation.

When the NF-HOOK macro is executed to trigger the specified hook, the nf_iterate function will be called to iterate over the nf_hook_ops Linked list corresponding to this hook, and each nf_hook_ops will be called in turn with the registered function member hookfn. The diagram is as follows.

This chaining of callback functions works in a way that has also led to the netfilter hook being called Chain, a connection that is particularly reflected in the iptables introduction below.

The callback function mechanism of netfilter hook has the following features.

iptbles is divided into two parts.

In the kernel network stack, iptables manages a large number of packet processing rules in an orderly manner through the xt_table structure. A xt_table corresponds to a rule table, which corresponds to the user space concept of table.

Based on the final purpose of the rules, iptables initializes four different rule tables by default, namely raw, filter, nat, and mangle. the following example describes the initialization and invocation process of xt_table for filter.

The definition of filter table is as follows.

The priority values for different tables are as follows.

When a packet reaches a hook trigger point, all callback functions registered on that hook by different tables are executed sequentially, always in a fixed relative order according to the priority value above.

Before diving into the rule execution process, it is important to understand how the ruleset is represented in memory. Each rule consists of 3 parts.

The ipt_entry structure is defined as follows.

ipt_do_table first jumps to the corresponding ruleset memory area based on the hook type and the xt_table.private.entries property, and performs the following procedure. 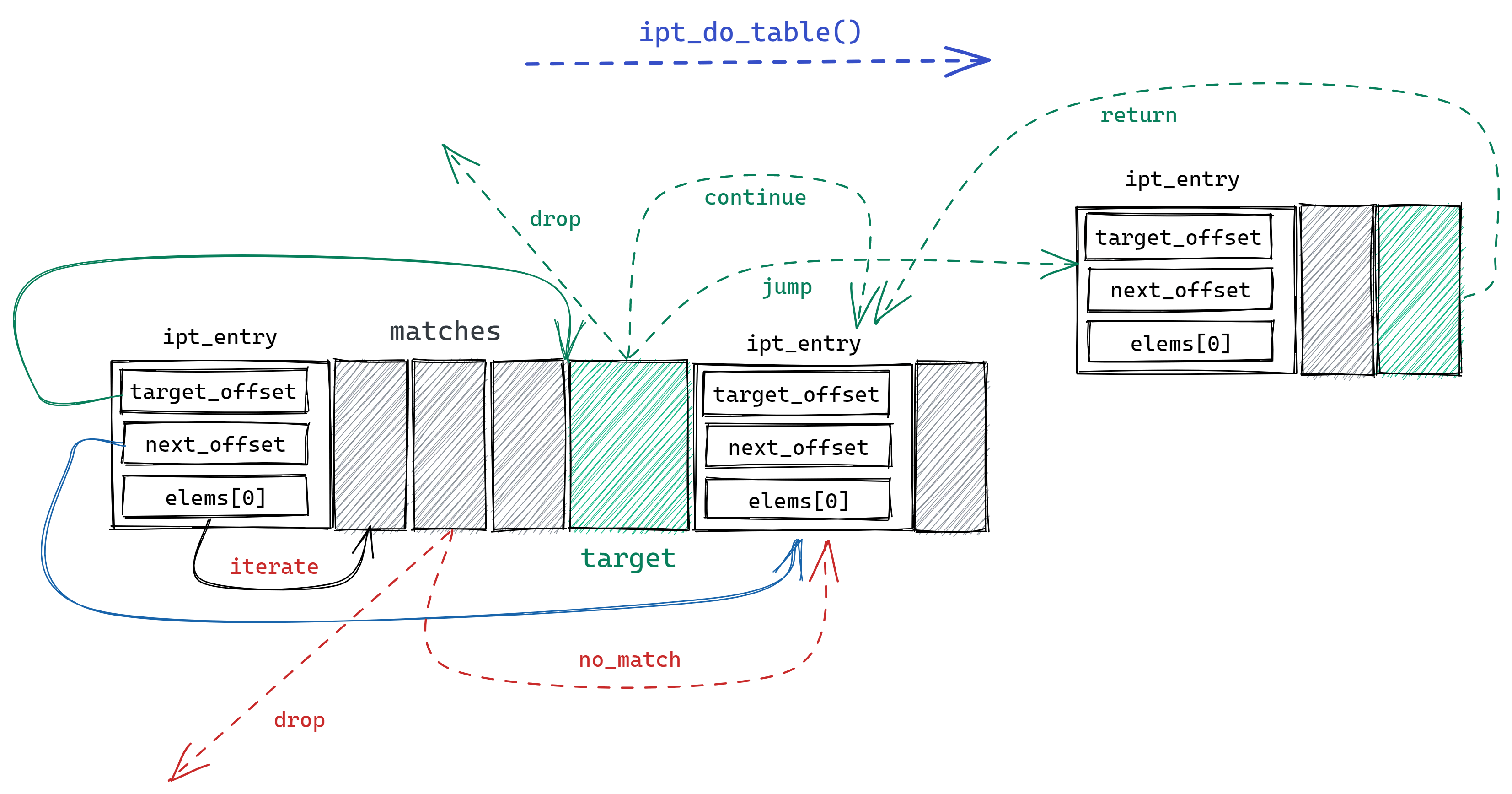 The above data structure and execution provides iptables with the power to scale, allowing us to flexibly customize the matching criteria for each rule and perform different behaviors based on the results, and even stack-hop between additional rulesets.

Because each rule is of varying length, has a complex internal structure, and the same ruleset is located in contiguous memory space, iptables uses full replacement to update rules, which allows us to add/remove rules from user space with atomic operations, but non-incremental rule updates can cause serious performance problems when the rules are orders of magnitude larger: if a large If you use the iptables approach to implementing services in a large Kubernetes cluster, when the number of services is large, updating even one service will modify the iptables rule table as a whole. The full commit process is protected by kernel lock, so there is a significant update latency.

The iptables command line in user space can read data from a given table and render it to the terminal, add new rules (actually replacing the entire table’s rules table), etc.

Based on the flow of the code invocation process described above, the chain and rule are executed as shown in the following diagram. 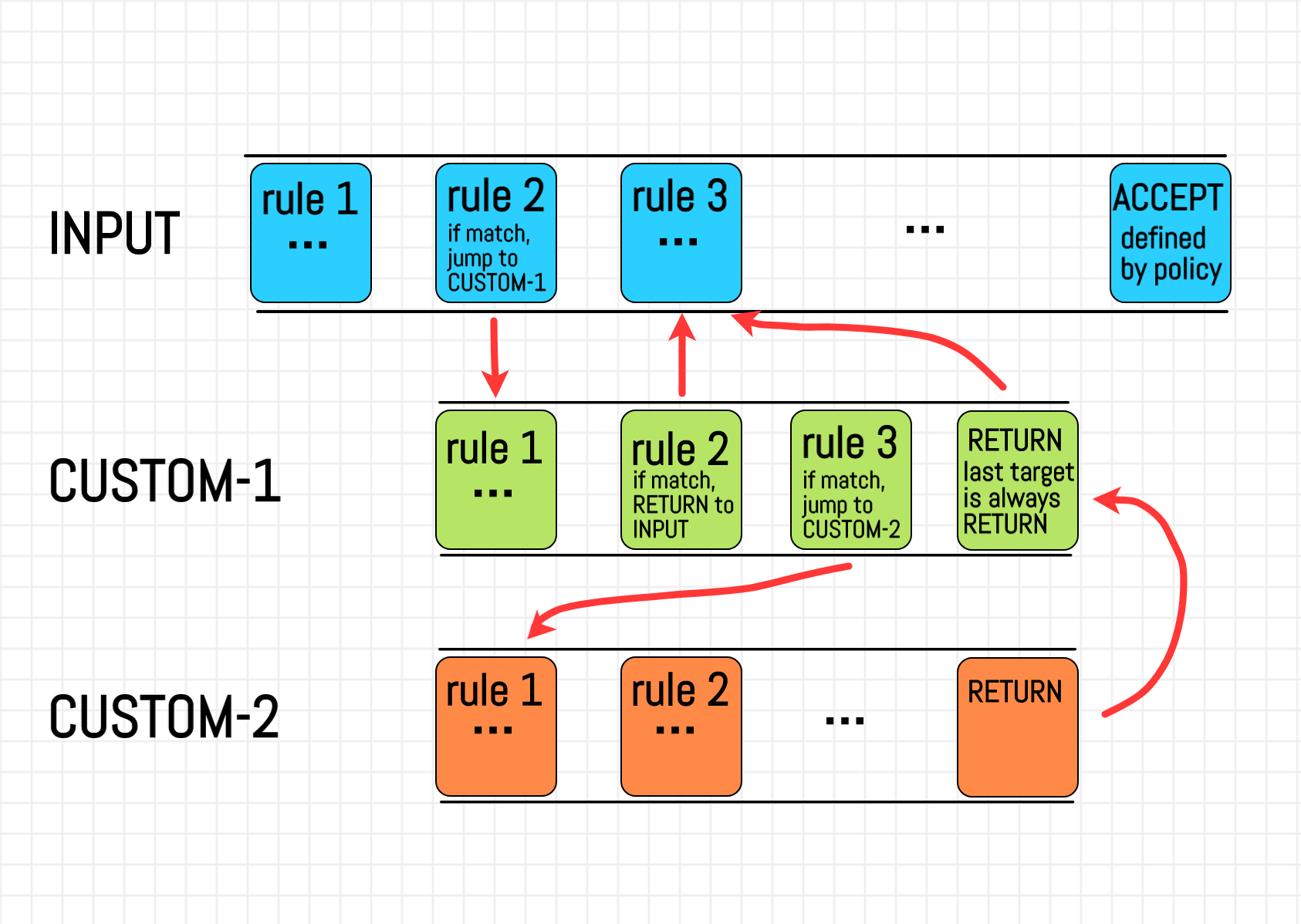 For the specific usage and commands of iptables, you can refer to Iptables Essentials: Common Firewall Rules and Commands | DigitalOcean.

It is not enough to filter packets by the first part of the layer 3 or 4 information, sometimes it is necessary to further consider the state of the connection. netfilter performs connection tracking with another built-in module conntrack to provide more advanced network filtering functions such as filtering by connection, address translation (NAT), etc. Because of the need to determine the connection status, conntrack has a separate implementation for protocol characteristics, while the overall mechanism is the same.

I was going to continue with conntrack and NAT, but I decided against it because of its length. I will write another article explaining the principles, applications and Linux kernel implementation of conntrack when I have time.