VM is divided into single node and cluster solutions, choose according to business needs. Single-node version directly runs a binary file both, the official recommendation is to collect data points less than 100w/s, recommended VM single-node version, simple and good maintenance, but does not support alarms. The cluster version supports horizontal data splitting. The following diagram is the official architecture of VictoriaMetrics Cluster Edition. 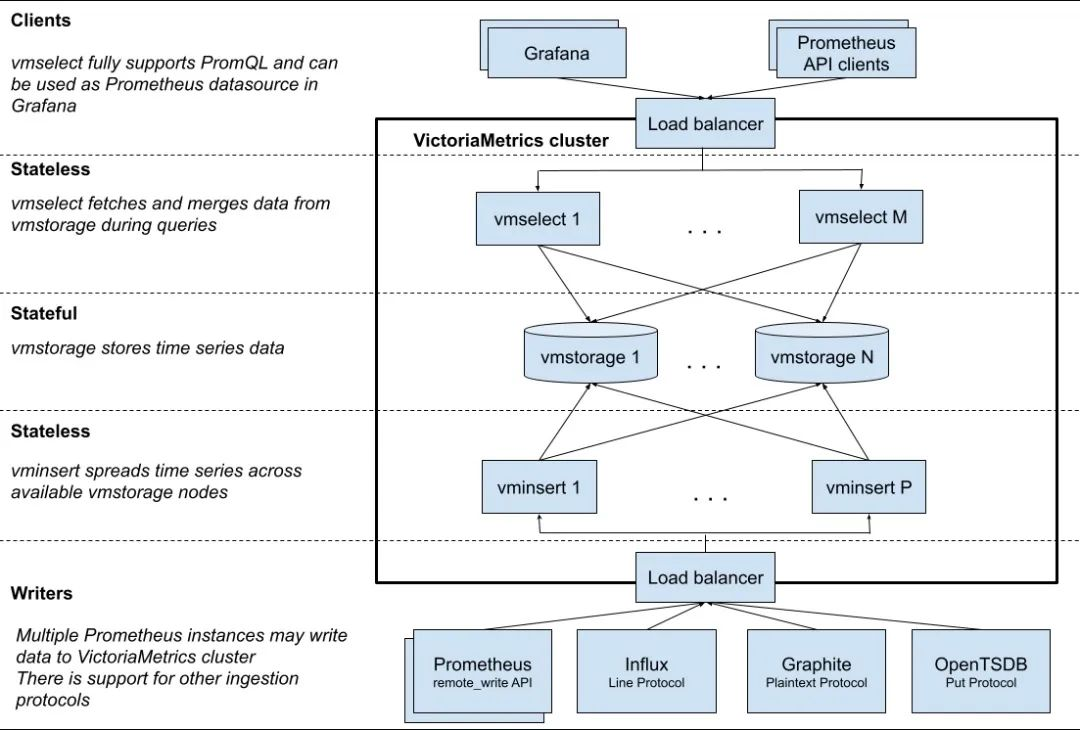 The main components include the following.

The clustering solution splits the functionality into vmstorage, vminsert, vmselect components, and if you want to replace Prometheus, you also need to use vmagent, vmalert. as you can see from the above diagram vminsert and vmselect are stateless, so scaling is simple, only vmstorage is stateful.

The main purpose of vmagent is to collect metrics data and store it in VMs and Prometheus-compatible storage systems (support for remote_write protocol is sufficient).

The following diagram shows a simple architecture of vmagent, which also implements the push function for metrics, in addition to many other features. 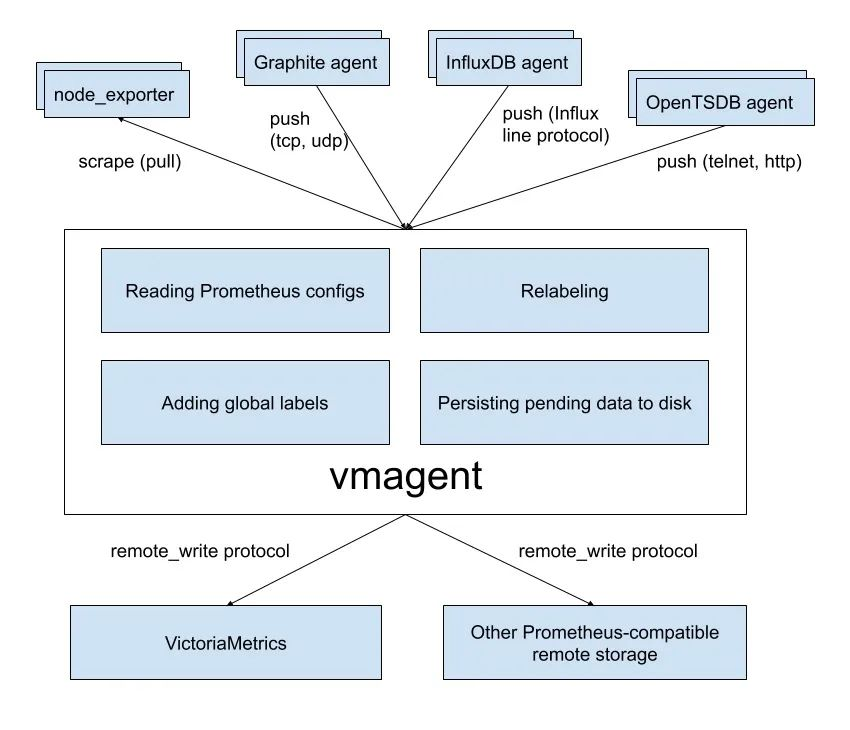 Next, we introduce the use of single-node and cluster scenarios for VMs respectively.

Here we run all resources under the kube-vm namespace.

First we run node-exporter under the kube-vm namespace using the DaemonSet controller, and the corresponding resource manifest file is shown below.

Since we also created the node-exporter in the previous section, to prevent port conflicts, here we use the parameter --web.listen-address=$(HOSTIP):9111 to configure the port to 9111. Just apply the resource list above directly.

Then we redeploy a separate set of Prometheus, for simplicity we directly use static_configs static configuration to grab the node-exporter metrics, the configuration list is shown below.

To persist the Prometheus data, you also need to create a corresponding PVC resource object.

Then create Prometheus directly, mount the above PVC and ConfigMap into the container, specify the path to the configuration file via the -config.file parameter, specify the TSDB data path, etc. The resource list file is shown below.

After deployment, you can access Prometheus via http://<node-ip>:31890 and see the metrics tasks for the 3 node nodes collected as normal.

Redeploying Grafana in the same way, the list of resources is shown below. 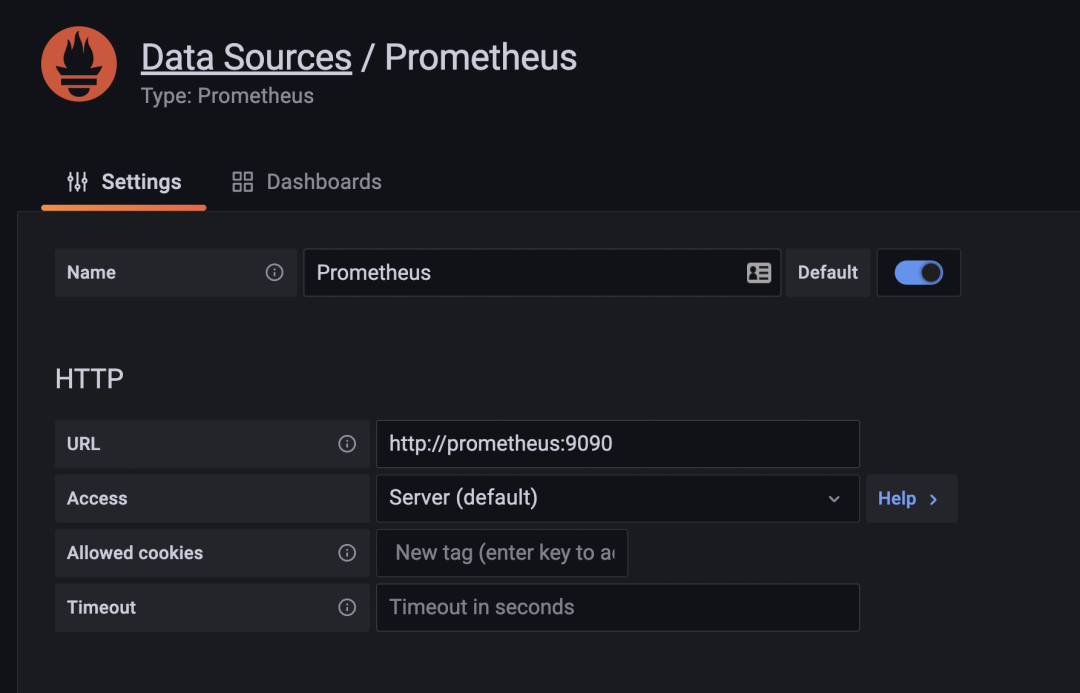 Then import the Dashboard 16098, the effect after import is shown below. 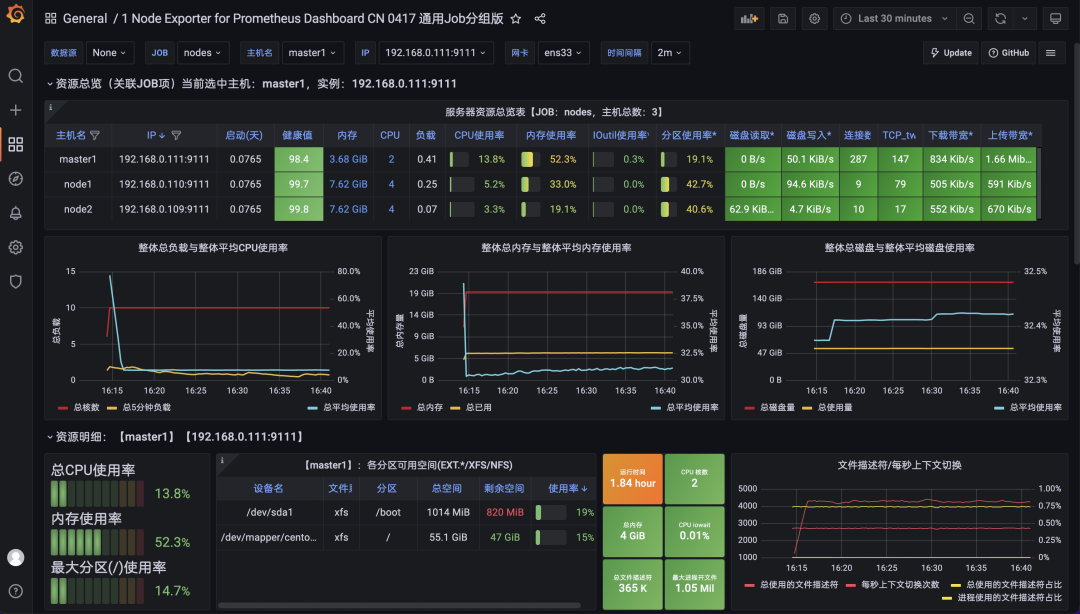 This completes the use of Prometheus to collect node monitoring metrics, so let’s use VM to retrofit the existing solution.

The first thing you need is a VM in single-node mode. Running the VM is easy, either by downloading the corresponding binary directly to start it or by using a docker image to start it with one click, which we also deploy here to a Kubernetes cluster. The resource list file is shown below.

Here we specify the data storage directory using the -storageDataPath parameter, which is then also persisted, and the -retentionPeriod parameter can be used to configure the data retention period. Just apply the resource list above directly.

At this point we have a single node VictoriaMetrics deployment. Next we just need to configure the remote write to our VM in Prometheus and change the Prometheus configuration.

Once the configuration takes effect, Prometheus will start writing data to the VM remotely, and we can verify this by checking the VM’s persistent data directory to see if any data is being generated. 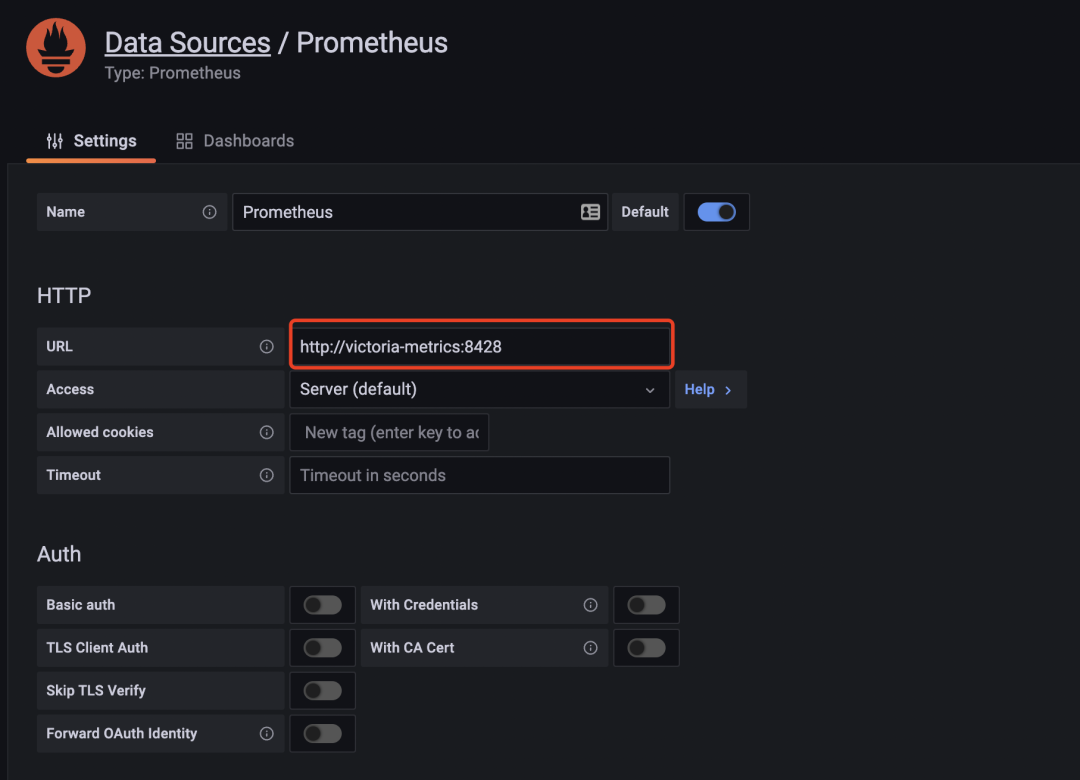 After the changes are made, you can revisit the node-exporter dashboard and it will display normally, proving that the VM is compatible. 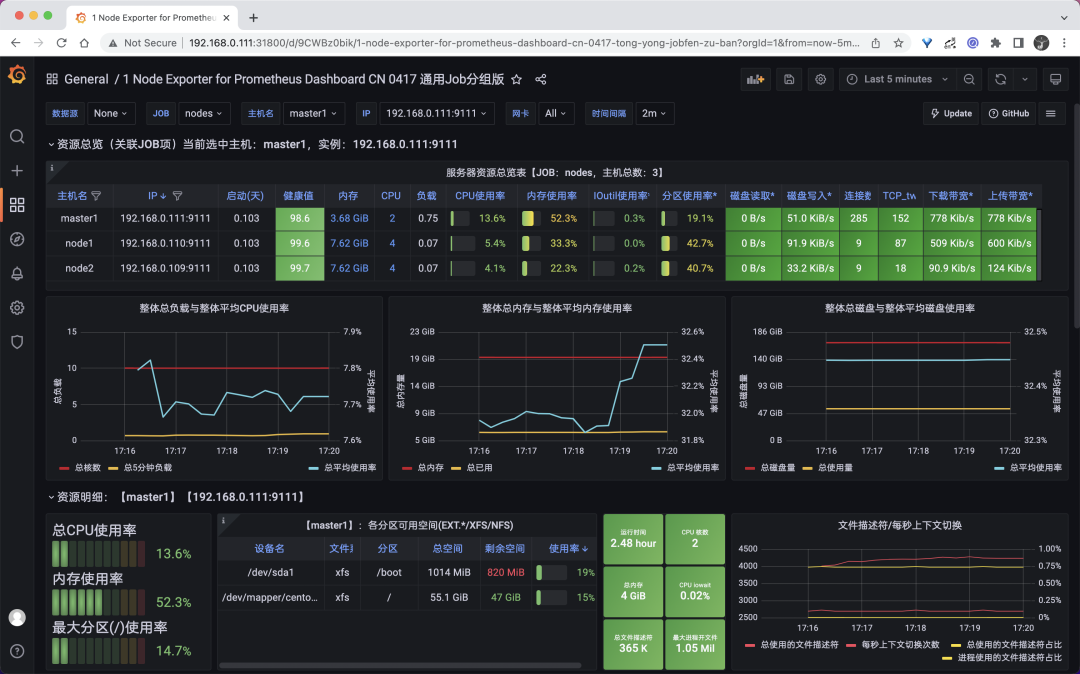 Remember to remove the remote_write module from the Prometheus configuration file first, and then just update the VM again.

The VM logs show that the Prometheus configuration was successfully read and 3 metrics (node-exporter) were grabbed. Now let’s go back to Grafana and see if the Dashboard for the node-exporter is displaying properly. First, make sure the data source is the VM’s address.

This replaces Prometheus with VM, and we can also explore the collected metrics on Grafana’s Explore page. 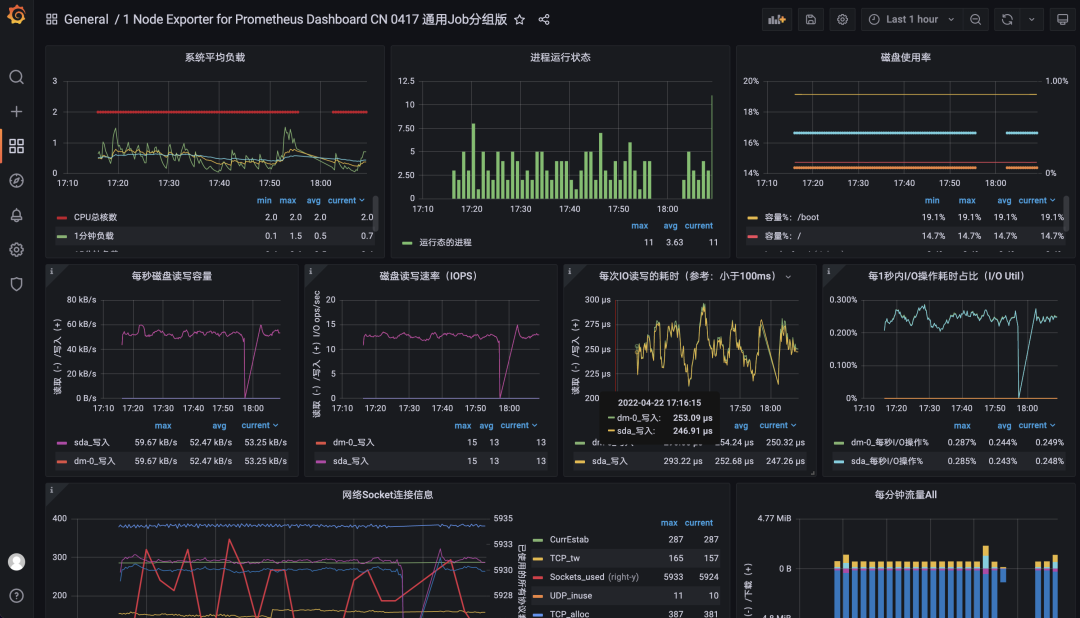 The single-node version of the VM itself comes with a web UI interface - vmui - but it is currently relatively simple and can be accessed directly through the VM’s NodePort. 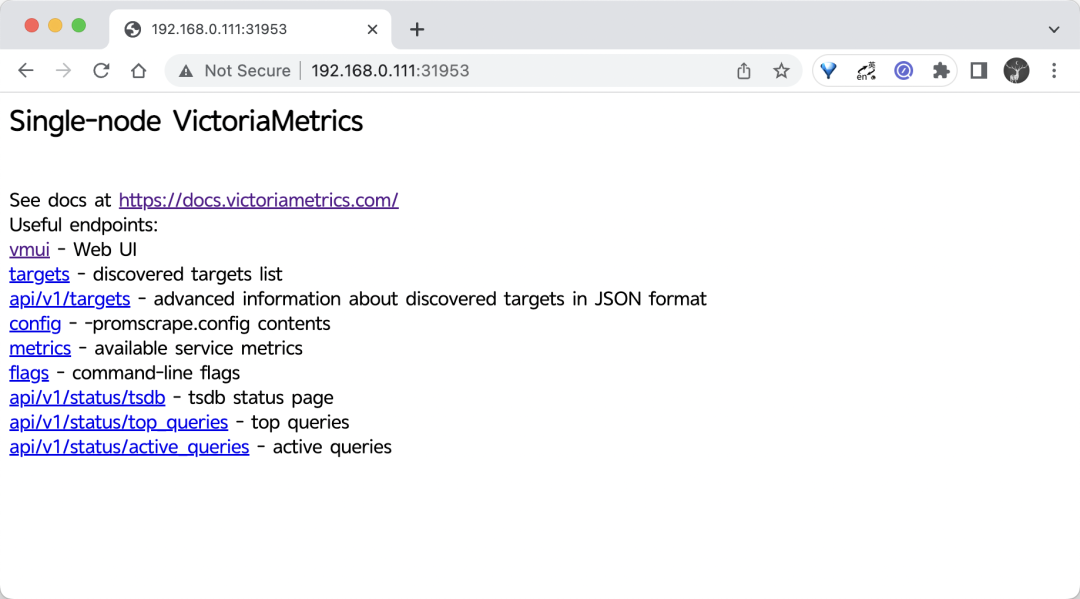 The UI interface can be accessed through the /vmui endpoint. 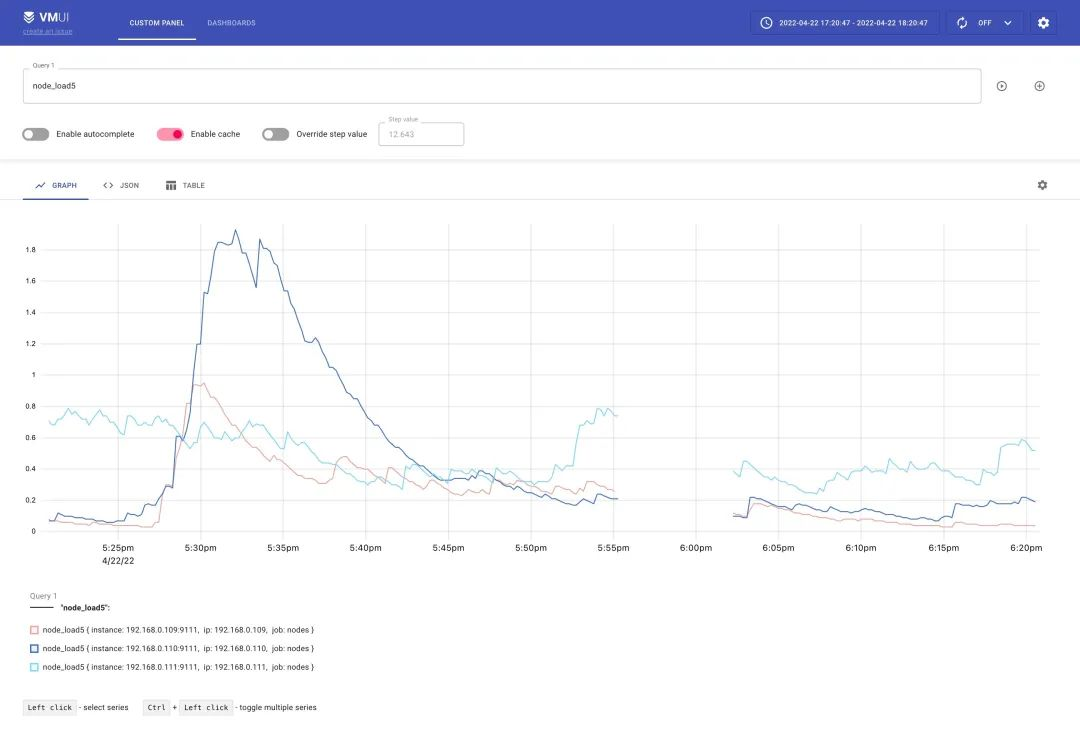 If you want to see the collected metrics targets, then you can get them through the /targets endpoint.

These functions can basically meet some of our needs, but they are still too simple. If you are used to the UI interface of Prometheus, then we can use promxy instead of vmui, and promxy can also perform data aggregation of multiple VM single nodes, as well as targets viewing, etc. The corresponding resource list file is shown below.

It is sufficient to apply the resource object above directly.

The effect of accessing the Promxy page is basically the same as the Web UI that comes with Prometheus. 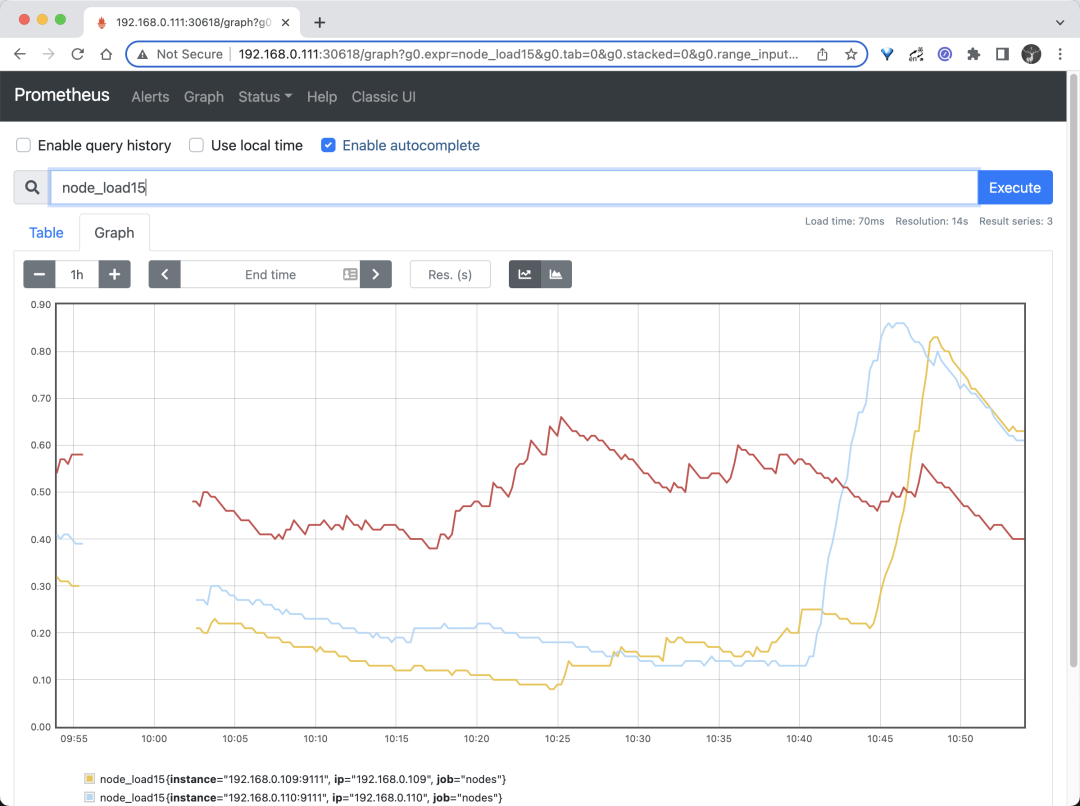 Here we briefly introduce the basic use of the standalone version of victoriametrics. Stay tuned for a follow-up article on the use of the cluster version.