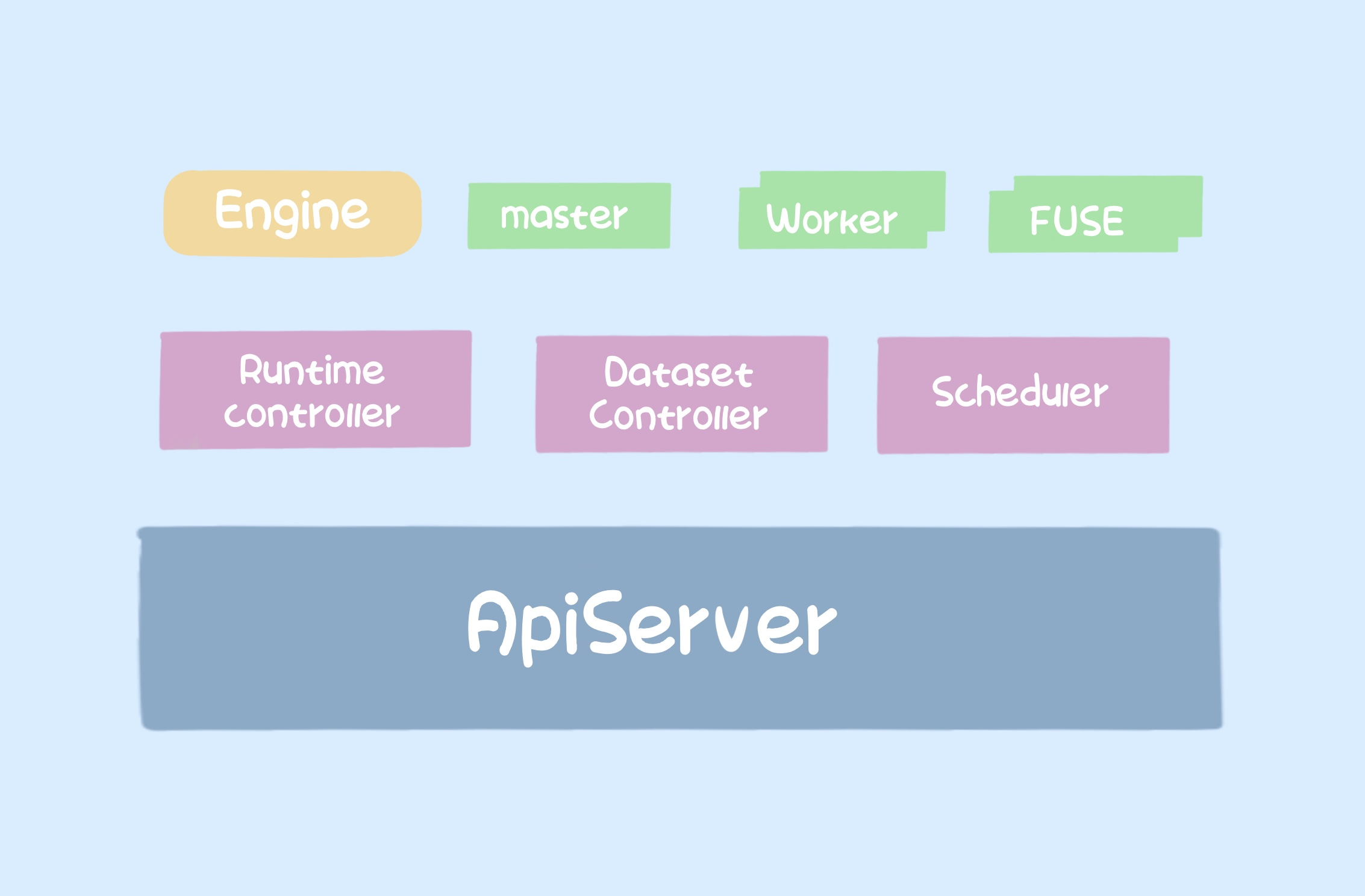 The whole architecture of Fluid is divided into two main parts.

One is the Controller, including RuntimeController and DatasetController, which manage the lifecycle of Runtime and Dataset respectively, and both of them work together to build a complete distributed caching system based on helm chart, usually in the form of master + worker + fuse to provide services upwards.

The second is the scheduler, which makes the upper application pods dispatch to the nodes with cache as much as possible based on the node information of the worker when cache is available.

Dataset refers to a dataset, which is a collection of logically related sets of data that will be used by computing engines, such as Spark for big data and TensorFlow for AI scenarios. Corresponding to JuiceFS, Dataset can also be understood as a Volume of JuiceFS.

The following is an example of JuiceFS to build a set of Fluid environment, after building the components as follows.

Role of each component.

Then create the Runtime and Dataset. You can refer to the official documentation for details: https://github.com/fluid-cloudnative/fluid/blob/master/docs/zh/samples/juicefs_runtime.md.

Once the JuiceFSRuntime and Dataset are created, the Runtime Controller will create the JuiceFS environment based on the parameters it provides. The special feature of JuiceFS compared to other Runtime is that it does not have a master component (because of the specificity of its distributed cache implementation). So here we only see the worker component started, which constitutes a standalone cache cluster (currently only supported by the Cloud Service version).

The Runtime Controller starts the JuiceFS environment by launching a helm chart whose rendered values.yaml is stored in the cluster as a ConfigMap. View the chart as follows.

It is important to note here that starting with v0.7.0, Fluid has adopted a lazy start of the FUSE client, starting the FUSE pod only when there is an application working, to avoid unnecessary waste of resources.

As you can see, after the application starts, the FUSE component also starts successfully.

Another important feature of Fluid is data pre-acceleration. To ensure the performance of applications when accessing data, data from remote storage systems can be pulled in advance to a distributed cache engine close to the compute node through data preloading, allowing applications consuming that dataset to enjoy the acceleration from the cache on the first run.

In Fluid, data acceleration corresponds to DataLoad, also a CRD, and the DatasetController is responsible for listening to this resource, starting a Job based on the corresponding DataSet, and performing data warm-up operations.

For example, if there are two subdirectories /dir1 and /dir2 in the original filesystem, the target is specified to indicate that the data from both directories are preheated to the cache cluster.

After the warm-up starts.

The way DatesetController starts a dataload job is also to start a chart, which includes a job and configMap.

When the status of the pod named loader-job is Completed, it means that the warm-up process is complete. The status of DataLoad also becomes Complete.

This article introduces the two core features of Fluid, data orchestration and data acceleration, using JuiceFS Runtime as an example. fluid adapts to multiple distributed cache engines to provide services to upper-level data-intensive applications in a unified data orchestration manner, allowing them to focus on their own data computation without being bound to the deployment of the underlying cache engine and many parameter details.