gomacro is a near-complete Go interpreter, implemented in pure Go, that provides both interactive REPL and scripting modes and does not require the Go toolchain at runtime (except for some very specific scenarios: importing third-party packages at runtime). It has two dependencies outside the Go standard library: github.com/peterh/liner and golang.org/x/tools/go/packages. 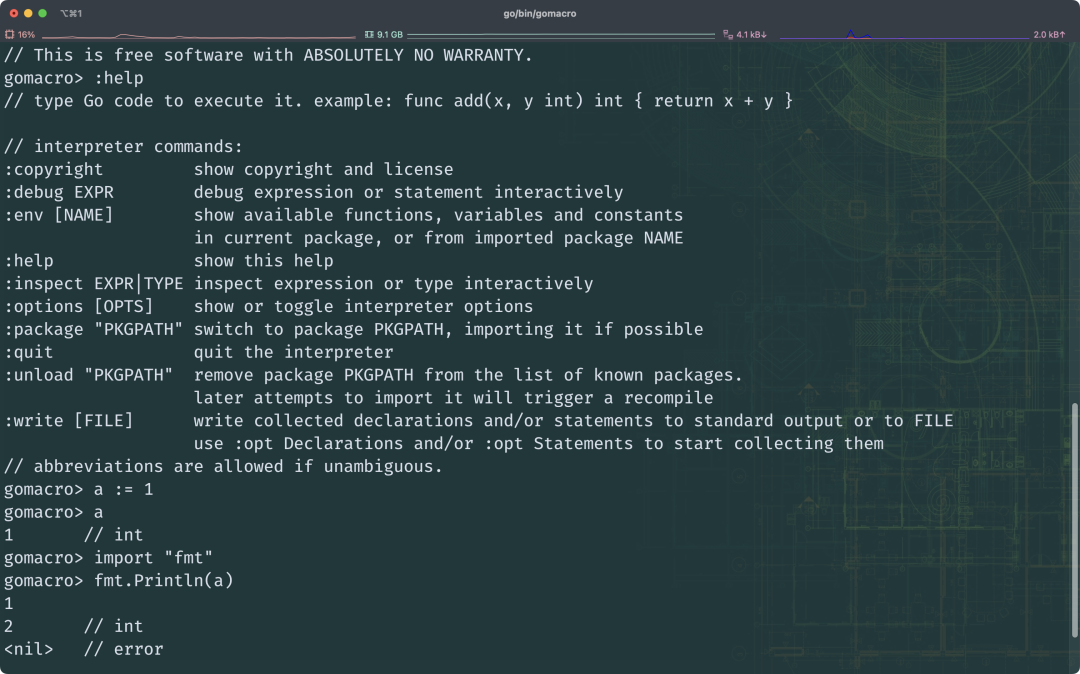 REPL is an acronym for Read-Eval-Print Loop, a simple, interactive programming environment where REPL means, respectively.

REPL is very useful for learning a new programming language, and you can quickly verify your understanding through the output in this interactive environment. For example, Python, which we use most often, comes with a programming environment like this.

Gomacro is one such REPL tool for the Go language, which can be used as.

Requires Go version 1.13+, Gomacro is pure Go and in theory it should run on any platform supported by the Go compiler. The following combinations have been tested and are known to work.

The installation is done by executing the following command.

If you are running gomacro on Linux or Mac OS X, then import will work: it will automatically download, compile and import a package as follows.

The command go mod tidy, which is executed automatically before the plugin is compiled, will attempt to resolve any version conflicts due to direct import or indirect import of different versions of the same package (i.e. as required dependencies).

The Go plugin is currently only supported on Linux and Mac OS X.

Starting with version 2.6, gomacro also has an integrated debugger. There are three input methods.

In all cases, execution will be paused and you will receive a debug> prompt that accepts the following commands: step, next, finish, continue, env [NAME], inspect EXPR, list, print EXPR-OR- STATEMENT .

The overall experience is a REPL that supports basic functionality, Tab auto-completion (e.g. typing fmt.Print and pressing Tab will switch between fmt.Print, fmt.Printf and fmt.Println), debugging and simple viewing of function signatures. gomacro is sufficient for basic quick verification of code run results.