Apple’s Objective-C compiler allows users to freely mix C++ and Objective-C in the same source file, and the resulting language is called Objective-C++. Compared to other languages (e.g. Swift, Kotlin, Dart, etc.) that use file isolation and bridge communication with C++ (e.g. Kotlin uses JNI and Dart uses FFI), Objective-C and C++’s same-file mashup is certainly comfortable. Although OC/C++ mashups can be written in a single file, there are some caveats to understand: Objective-C++ does not add C++ functionality to OC classes, nor does it add OC functionality to C++, e.g., you cannot call C++ objects with OC syntax, nor can you add constructors and destructors to OC objects. Nor can this and self be used interchangeably. The class architecture is independent, C++ classes cannot inherit OC classes, and OC classes cannot inherit C++ classes.

Experimental environment: C++ version is C++14, OC is limited to ARC only.

Before exploring in depth, understand the two by way of comparison.

Here is not to do a deeper exploration of the bottom of the Block of OC, just to expand the code to achieve a comparative effect.

By rewriting clang -rewrite-objc, you can get the following result.

C++ lambda takes a very different implementation mechanism and converts the lambda expression into an anonymous C++ class. Here is a look at the C++ lambda implementation with the help of cppinsights.

OC Block is only possible to capture variables in the normal way and in the __block way.

OC Block and C++ lambda both have their roots in stack objects, but their subsequent development is very different. OC Block are essentially OC objects, they are stored by reference, never by value. OC Blocks must be copied to the heap in order to extend their lifecycle. OC Blocks follow the OC reference counting rules, and copy and release must be balanced (same for Block_copy and Block_release). The first copy will move Block from the stack to the heap, and another copy will increase its reference count. When the reference count reaches 0, Block is destroyed and the object it captures is released.

In contrast, this points to a store on the heap, which has a guaranteed lifetime, but even so, it is not absolutely guaranteed to be life-safe, and in some cases it is necessary to extend the lifetime with the help of smart pointers.

The previous discussion is all independent of each other, OC’s Block does not involve C++ objects, and C++’s lambda does not involve OC objects, which is probably what we would like to see, but the mixup process will reveal that this is just wishful thinking on our part. The two tend to extend their magic wands into each other’s domain, which can lead to some rather puzzling problems.

As the code shows, there is a C++ field cppObj in the OCClass class, and in the initialization method of OCClass, cppObj is initialized and its field callback is assigned a value. You can see that self is captured in lambda, which can be considered value capture according to the previous rules.

Looking at the corresponding assembly code, you can see that the capture triggers the ARC semantics and automatically retain on self. 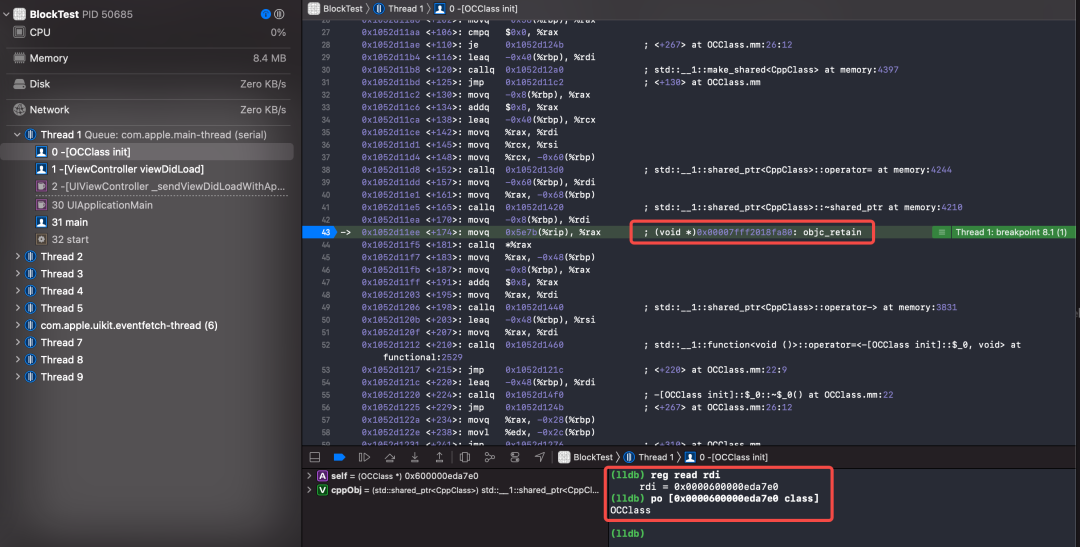 These lines of assembly code add a reference count to self.

Finally, looking at the parameters of the anonymous class, you can see that self is of type OCClass *, which is a pointer type.

Then it can be simply assumed that the capture pseudocode is as follows, and that the retain behavior occurs under ARC semantics.

To solve the problem of circular references, __weak can be used.

Looking at the assembly code again, I see that the previous objc_retain logic has disappeared and is replaced by objc_copyWeak.

So is it possible to capture self by reference capture?

You can see that there is also no objc_retain logic in the assembly code.

Finally, looking at the parameters of the anonymous class, we can see that self is of type OCClass *&, which is a pointer reference type.

You can see that reference capture does not retain self, and you can simply assume that the capture pseudocode is as follows, and no retainment behavior occurs under ARC semantics.

When is the captured OC object released?

Take this code snippet as an example.

You can see that std::function is destructed in the destructor of CppClass, and std::function releases the OC variable oc2 that it captures.

C++ lambda captures OC objects by value or by reference.

Take a look at how OC’s Block captures C++ objects.

The HMRequestMonitor in the code is a C++ structure with WaitForDone and SignalDone methods that are mainly for synchronization.

The upload method uses the HMRequestMonitor object for the purpose of waiting for network request results synchronously (the code has been adjusted for typography).

does not use __block 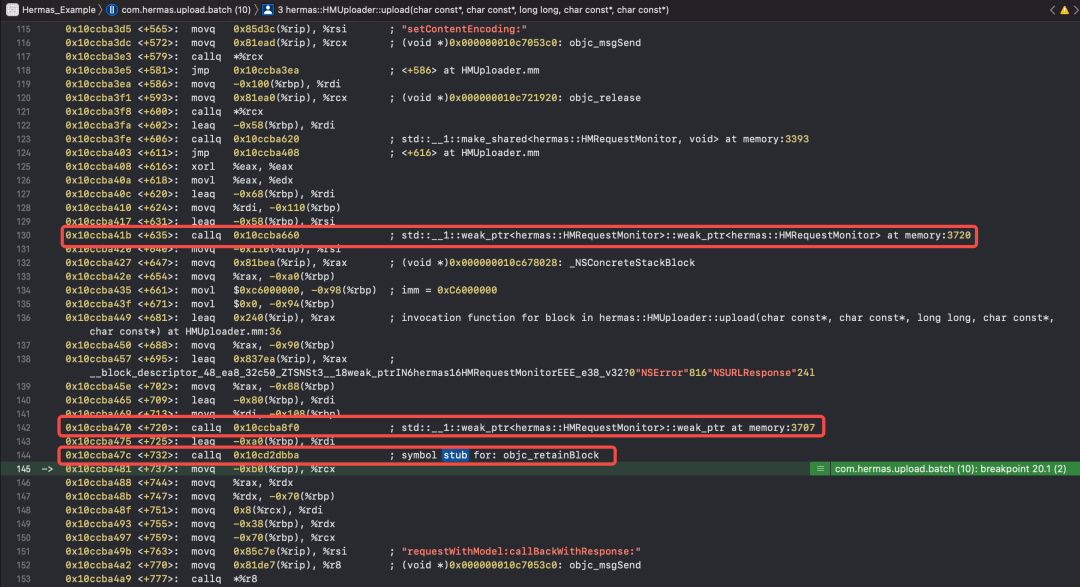 The following conclusions can be drawn from experiments.

Here we need to pay attention to: C++ weak_count is strange, its value = number of weak references + 1, the reason for this design is more complicated, please refer to: https://stackoverflow.com/questions/5671241/how-does-weak-ptr-work

So is it possible to use __block to modify a captured C++ variable? Experimentation has shown that it is possible. 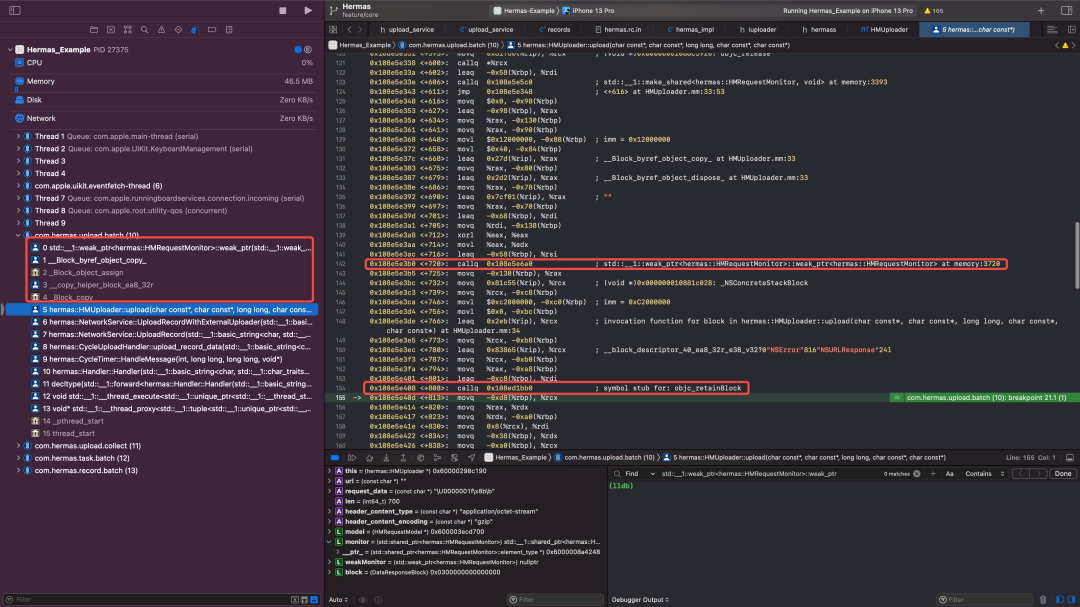 The following conclusions can be drawn.

Those who know C++ may wonder, since the move constructor is triggered here, only the ownership has been transferred, meaning that monitor is passed in as the right value and has become nullptr to be extinguished, then why is monitor still accessible in the example? It can be verified that.

During the whole process, the address of monitor changes before and after 2 different std::shared_ptr objects. So monitor can still be accessed.

When is a captured C++ object released?

Also when OC’s Block is released, it is released for the C++ object it captures.

C++’s this is a pointer, which is essentially an integer. OC’s Block capturing this is not fundamentally different from capturing an integer, so we won’t discuss it in detail here. The focus here is on C++’s shared_from_this class, which is a smart pointer version of this.

If a C++ class wants to access shared_from_this, it must inherit from class enable_shared_from_this and pass its own class name as a template parameter.

According to the previous conclusion, in the CppClass member function attachOCBlock, ocBlock captures shared_from_this directly, which also triggers a circular reference, and also takes std::weak_ptr to resolve it.

This article started with a brief comparison between OC’s Block and C++’s lambda in 4 dimensions: syntax, principles, variable capture and memory management, and then focused more on OC/C++’s closure hybrid capture. The reason why I went to such great lengths is that I don’t want to “guess” and “try and fail” in a confusing way, but only by understanding the mechanism behind it can I write better OC/C++ mixed code, and I also hope to bring some help to readers who have the same confusion. However, this is only the tip of the iceberg for the whole field of OC/C++ mashups, and there are still a lot of difficult issues to be explored in the future.