Earlier we learned about the basic architecture of VMs, for the clustered mode the main services include the following.

Each service can scale independently, and the vmstorage nodes do not know or communicate with each other and do not share any data. This increases the availability of the cluster and simplifies cluster maintenance and scaling. The minimum cluster must contain the following nodes.

The individual services can be configured by means of environment variables in addition to the parameter flags as follows.

VM clusters also support multiple independent tenants (also called namespaces), which are identified by accountID or accountID:projectID, which are placed in the requested urls.

The performance and capacity of a VM cluster can be scaled in two ways.

There are some general recommendations for cluster scaling.

Cluster capacity scales linearly with available resources, and the amount of CPU and memory required per node type depends heavily on the workload - number of active time series, series churn rate, query type, query QPS, etc. It is recommended to deploy a test VictoriaMetrics cluster for your production workload and iteratively tune the resources per node and the number of nodes per node type until the cluster becomes stable. It is also recommended to set up monitoring for the cluster to help identify bottlenecks in the cluster setup.

Specifying the required storage space to be reserved (which can be set via the -retentionPeriod command line flag in vmstorage) can be inferred from the disk space usage in a test run. For example, if the storage usage after a day’s run on a production workload is 10GB, it will require at least 10GB*100=1TB of disk space for -retentionPeriod=100d (100-day retention period). Storage usage can be monitored using the official Grafana dashboard for VictoriaMetrics clusters (https://grafana.com/grafana/dashboards/11176).

It is recommended that the following amount of spare resources be set aside.

By default, VictoriaMetrics data replication relies on the underlying storage pointed to by -storageDataPath for this purpose.

When replication is enabled, the -dedup.minScrapeInterval=1ms command line flag must be passed to the vmselect node. When up to N-1 vmstorage nodes are slow and/or temporarily unavailable, the optional -replicationFactor=N parameter can be passed to vmselect to improve query performance.

This is because vmselect does not wait for responses from up to N-1 vmstorage nodes. Sometimes the -replicationFactor on a vmselect node may result in a partial response. -dedup.minScrapeInterval=1ms Duplicate replicated data is removed during a query.

If deduplicated data is pushed to VictoriaMetrics from identically configured vmagent instances or Prometheus instances, -dedup.minScrapeInterval must be set to a larger value based on the deduplication documentation.

Please note that replication does not save from disaster, so it is recommended to perform regular backups. Also replication increases resource usage - CPU, memory, disk space, network bandwidth - by up to -replicationFactor times. So it can be guaranteed by moving replication to the underlying storage pointed to by -storageDataPath, such as Google Compute Engine permanent disks, which protect against data loss and data corruption, and which also provide consistently high performance and can be resized without downtime. For most use cases, HDD-based persistent disks should be sufficient.

It is recommended to perform regular backups from instant snapshots to prevent errors such as accidental data deletion. The following steps must be performed for each vmstorage node to create a backup.

To restore from a backup.

After understanding some configuration details of VM clustering, let’s start deploying the VM cluster next.

If you already know the VM components well, then a one-click installation using Helm Chart is recommended.

The reason we choose to deploy manually here is to get more details about each component.

First of all, you need to create a Headless Service, because the later components need to access to each specific Pod. In the vmstorage startup parameters, you specify the indicator data retention duration through the --retentionPeriod parameter, 1 means one month, which is also the default duration, and then you specify the data storage path through the -- storageDataPath parameter specifies the data storage path, remember to persist the directory.

Next, we can deploy the vmselect component, which is stateless and can be managed directly using Deployment, with the corresponding resource list file shown below.

The most important part of this is to specify all vmstorage node addresses via the --storageNode parameter, which we used above for the StatefulSet deployment, so it can be accessed directly using the FQDN form. To apply the above object directly.

If we want to do a query, then we can just expose the vmselect service directly to the public by modifying the Grafana data source address to http://<select-service>/select/0/prometheus/ . 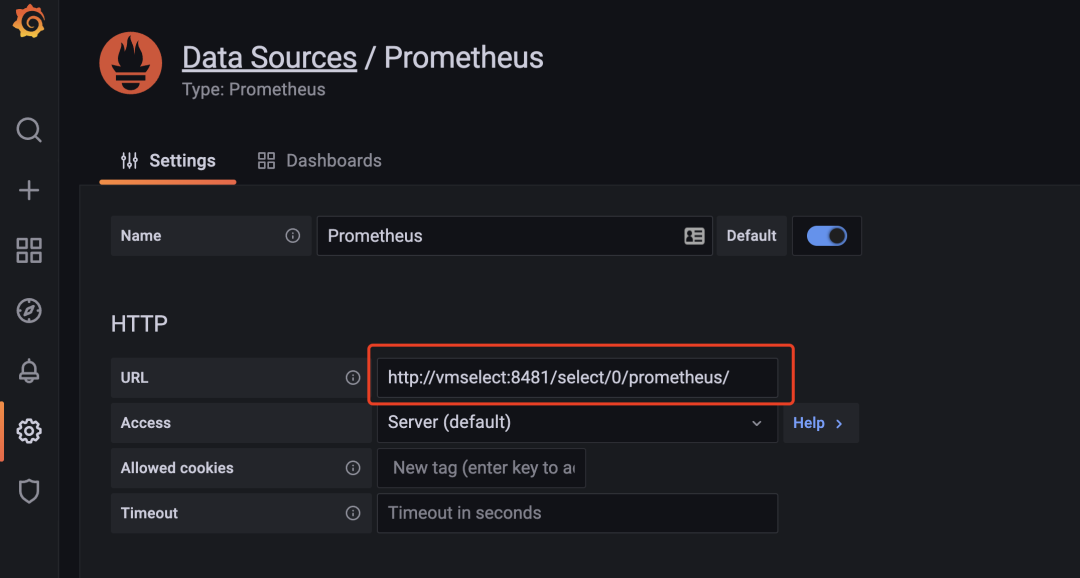 Then you need to deploy the vminsert component to receive the indicator data inserts, which is also stateless, and most importantly, you need to specify all vmstorage nodes with the --storageNode parameter.

Since it is inherently stateless, the number of replicas can be increased as needed, and the HPA can be configured for automatic expansion and contraction. Apply the resource list above directly.

Update the Prometheus configuration and start Prometheus, the previous VMs in standalone mode can be stopped first.

After successful configuration, normal data can start to be written to vmstorage. Checking the vmstorage logs, you can see that the partition was successfully created, which proves that the data is now being received.

Then you can go to Grafana and recheck if the Dashboard is working. 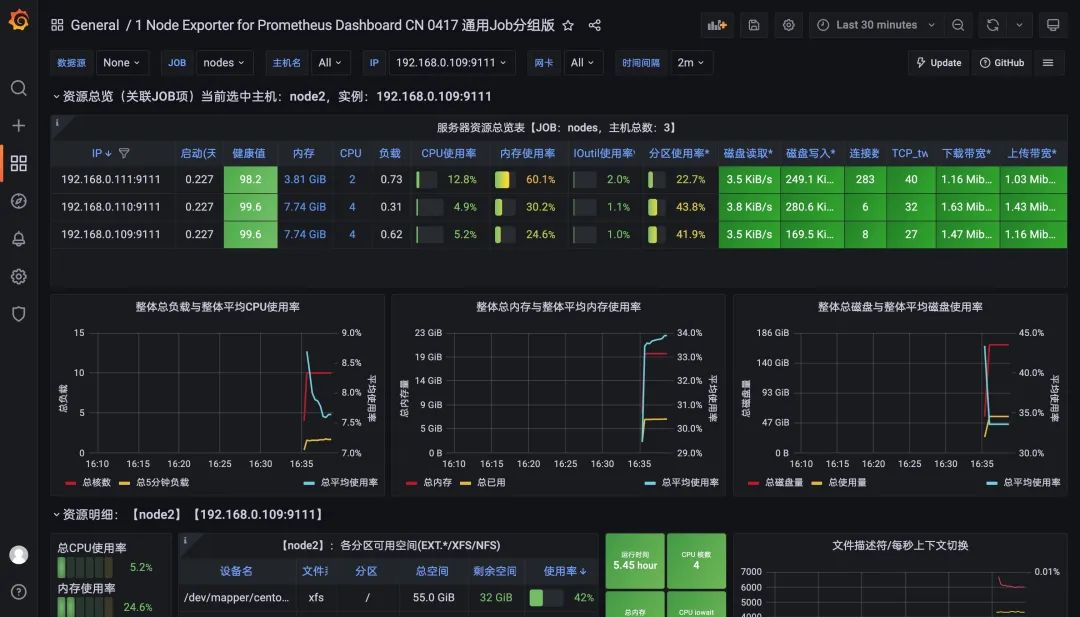