In a nutshell: save and reuse temporary objects, reduce memory allocation, and reduce GC pressure. 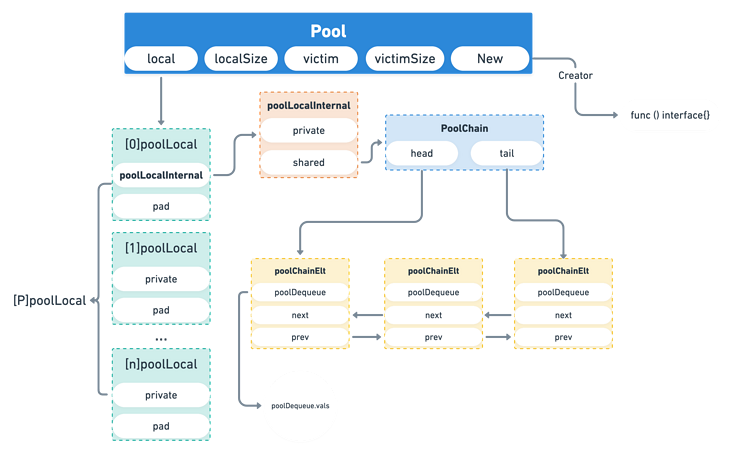 As a simple example.

The deserialization of json is very common in text parsing and network communication, and when the program is very concurrent, a large number of temporary objects need to be created in a short time. These objects are allocated on the heap, which will put a lot of pressure on the GC and seriously affect the performance of the program.

Since version 1.3, Go has provided a mechanism for object reuse, the sync.Pool. sync.Pool is scalable and concurrency-safe, and its size is limited only by the size of memory. sync.Pool is used to store values that have been allocated but not used, and may be used in the future. This allows the system to reuse existing objects without having to go through memory allocation again, reducing the pressure on GC and thus improving system performance.

The size of the sync.Pool is scalable and will be dynamically expanded at high load, and objects stored in the pool will be automatically cleaned up if they become inactive.

The use of sync.Pool is very simple.

2.1 Declaring a pool of objects

In this example, because the Student structure has a small memory footprint, memory allocation takes almost no time at all. The standard library json deserialization uses reflection, which is less efficient and takes up most of the time, so the final execution time between the two methods is almost unchanged. However, the memory footprint is an order of magnitude worse. After using sync.Pool, the memory footprint is only 234/5096 = 1/22 of unused, which has a big impact on GC.

This example creates a pool of bytes.Buffer objects and performs only one simple Write operation at a time, which is a pure memory mover and takes almost negligible time. Memory allocation and reclamation, on the other hand, take up more time and therefore have a greater impact on the overall performance of the program.

4 Use in standard libraries

The Go language standard library also makes extensive use of sync.Pool, such as fmt and encoding/json.