IPv6 is called Internet Protocol Version 6, but although it is called Version 6, it is actually the second generation standard protocol of network layer protocol. The main reason for its emergence is to solve some shortcomings of IPv4 in practical application scenarios.

Comparison of advantages and disadvantages with IPv4

Similar to the IPv4 design, an IPv6 address is composed of two parts.

An IPv6 multicast address consists of four parts: a prefix, a flag field, a scope field, and a multicast group ID: 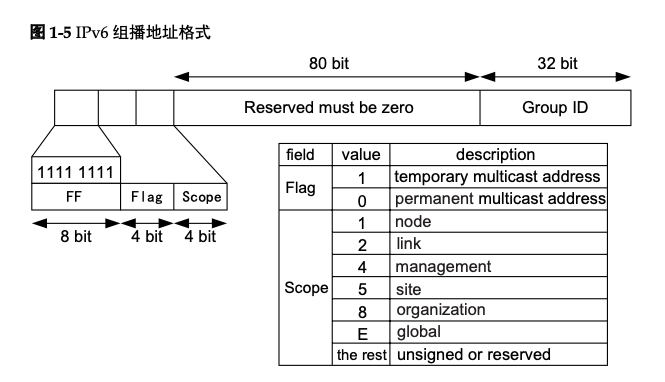 IPv6 does not have broadcast addresses and does not use ARP, but still requires the ability to resolve from an IP address to a MAC address. In IPv6, this function is accomplished through the Neighbor Solicitation message. When a node needs to resolve the MAC address corresponding to an IPv6 address, it sends an NS message whose destination IP is the multicast address of the requested node corresponding to the IPv6 address to be resolved; only the node with the multicast address will check the processing.

The multicast address of the requested node consists of the prefix FF02::1:FF00:0/104 and the last 24 bits of the unicast address.

The IPv6 message format is composed of three main parts

The basic header format of an IPv6 header is as follows. 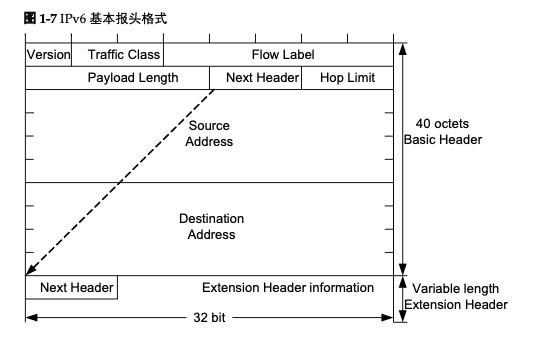 These fields are explained as follows.

From the above description, we know that the basic header of IPv6 is simplified compared with that of IPv4, except for the IHL, identififiers, Flags, Fragment Offset, Header Checksum, Options, Paddiing fields, and only the Flow Label field is added. This design can improve the data processing performance of routing devices.

In IPv4, the IPv4 header contains optional fields Options, which cover security, Timestamp, Record route, etc. These Options can expand the IPv4 header length from 20 bytes to 60 bytes. In the forwarding process, processing IPv4 messages carrying these Options takes up a lot of resources of the device, so they are rarely used in practice. 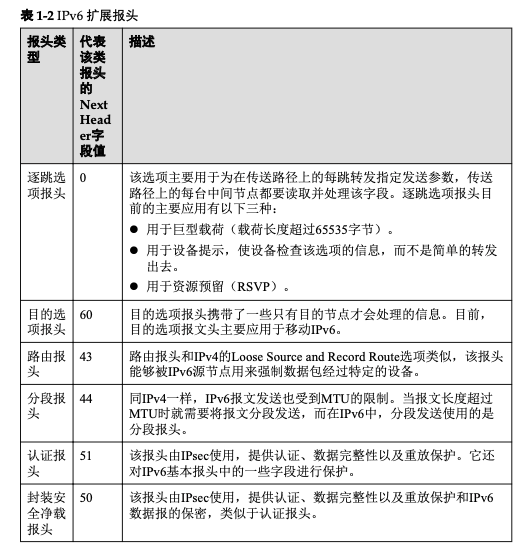 ICMPv6 (Internet Control Message Protocol for the IPv6) is one of the base protocols for IPv6.

In IPv4, the Internet Control Message Protocol (ICMP) reports errors and information to the source node about the transmission of IP packets to the destination. It defines messages for diagnostic, informational, and management purposes, such as: destination unreachable, packet overlength, timeout, response request, and response reply. In IPv6, ICMPv6 provides the common features of ICMPv4, but is also the basis for other features such as neighbor discovery, stateless address configuration (including duplicate address detection), and PMTU discovery.

The protocol type number of ICMPv6 (i.e., the value of the Next Header field in IPv6 messages) is 58. 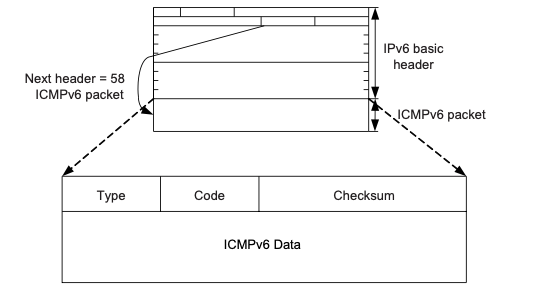 The fields in the message are explained as follows:

Neighbor Discovery Protocol (NDP) is a Layer 3 protocol based on ICMPv6 that replaces the IPv4 ARP protocol. Two types of ICMPv6 messages are used in the address resolution process: Neighbor Solicitation (NS) and Neighbor Advertisement (NA). 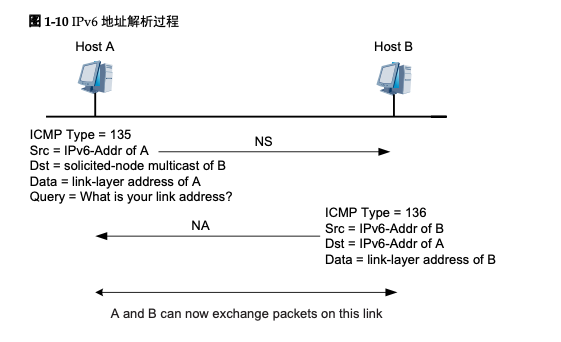 Tracking the status of neighbors

Communication through or to a neighbor can be interrupted for a variety of reasons, including hardware failure, hot insertion of an interface card, etc. If the destination fails, recovery is impossible and communication fails; if the path fails, recovery is possible. Therefore, nodes need to maintain a neighbor table, each neighbor has a corresponding state, and the state can be migrated between.

The following is an example of the neighbor state change of node A during the mutual communication between two neighbor nodes A and B (assuming that A and B have never communicated before) to illustrate the process of neighbor state migration. 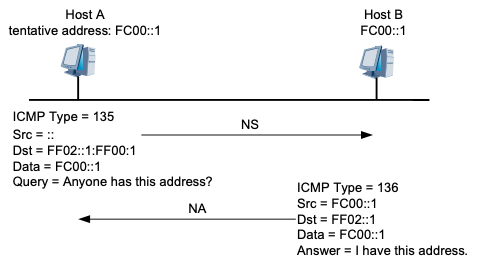 Host A’s IPv6 address FC00::1 is the newly configured address, that is, FC00::1 is Host A’s test address. Host A sends an NS message with FC00::1 as the requested destination address to FC00::1’s Solicited-Node multicast group for duplicate address detection, and since FC00::1 is not formally specified, the The source address of the NS message is an unspecified address. When Host B receives this NS message, there are two ways to handle it:

The router discovery function is used to discover devices connected to the local link and to obtain prefixes and other configuration parameters related to address autoconfiguration.

In IPv6, IPv6 addresses can support stateless autoconfiguration, where a host obtains network prefix information through some mechanism and then the host generates the interface identification portion of the address itself. The router discovery function is the basis of the IPv6 address autoconfiguration function, which is mainly implemented by the following two types of messages: 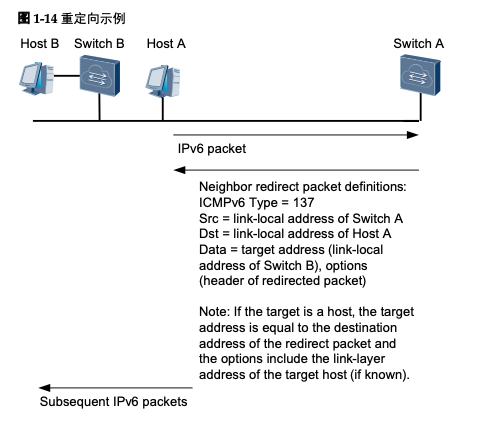 Host A needs to communicate with Host B. Host A’s default gateway device is Switch A. When Host A sends a message to Host B, the message will be sent to Switch A. Switch A receives the message from Host A and finds that it is actually better for Host A to send it directly to Switch B. It will send a redirect message to Host A, where the next hop address of the better path in the message is Switch B and the Destination Address is Host B. After Host A receives the redirect message, it will add a host route to the default routing table. After receiving the redirected message, Host A will add a host route to the default routing table, and future messages to Host B will be sent directly to Switch B.

When the device receives a message, it sends a redirect message to the sender of the message only in the following cases:

In IPv4, if a message is too large, it must be sent in pieces, so before each node sends a message, the device will slice the message according to the maximum transmission unit (MTU) of the sending interface. However, in IPv6, in order to reduce the processing pressure on the intermediate forwarding device, the intermediate forwarding device does not slice the IPv6 messages, and the slice of the messages is performed at the source node. When the interface of the intermediate forwarding device receives a message, if it finds that the length of the message is larger than the MTU value of the forwarding interface, it will discard it; at the same time, it will send the MTU value of the forwarding interface to the source host through the “Packet Too Big” message of the ICMPv6 message, and the source host will resend the IPv6 message with that value. The PMTU discovery protocol can dynamically discover the MTU value of each link in the entire transmission path to reduce the extra traffic overhead caused by retransmissions. 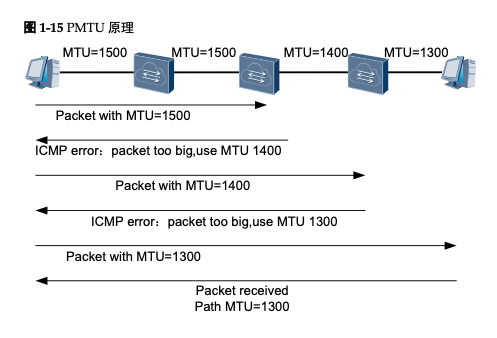 IPv4/IPv6 dual-stack is a solution for the transition from IPv4 to IPv6, where a network interface has both IPv4 and IPv6 addresses, so that when communicating with a remote end, it can use IPv6 if the remote end supports IPv6, but otherwise it can also use IPv4. Kubernetes started supporting dual stacks after 1.20. Of course, in addition to the Kubernetes version requirements, the CNI plug-in must also support dual-stacking.

To enable dual stack in Kubernetes, the following configuration is required.

You usually have more contact with IPv4 addresses, so you can probably know what a certain address means at a glance, but it is often difficult to distinguish in IPv6, so here is a table for reference.