Interface is defined as an abstraction of all queues.

You can see that the core properties are queue , dirty , processing.

Before looking at priority queues, you need to have some understanding of Heap, because delay queue uses heap for delay queues.

Heap is a special data structure based on the tree property; heap is a fully binary tree type with two types.

Storage rules for a binomial heap.

So which of the following images is the heap?

Example: The process of adding an element with the value 42 to the left

Step 1: Put the new element into the first available position in the heap. This will keep the structure as a complete binary tree, but it may no longer be a heap, as the new element may have a larger value than its parent.

This process is called reheapification upward.

Step 1: Copy the root element to the variable used to return the value, copy the last element at the deepest level to the root, and then remove the last node from the tree. This element is called out-of-place.

Step 2: While swapping the dissimilar element with the child of its maximum value and returning the value saved in step 1.

This process is called reheapification downward.

Behavior of the priority queue.

How it is implemented.

The design of delaying queue in Kubernetes is beautifully done by using a delayed queue implemented by heap, together with a pass-through queue in kubernetes.

Specifically implements an instance of DelayingInterface.

Then the whole data structure of the delay queue is shown in the figure below. 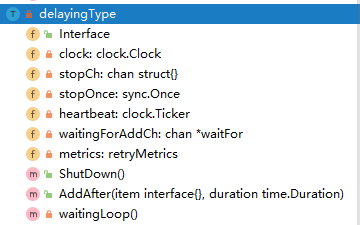 And as mentioned in the above section, the core of this delay queue is a priority queue, which in turn needs to satisfy.

And waitFor is the data structure of this priority queue

The waitForPriorityQueue is an implementation of container/heap/heap.go.Inferface, whose data structure is a MinHeap that keeps the minimum readyAt at Root.

And the implementation of this is waitForPriorityQueue.

The core of the whole delay queue is waitingLoop, which serves as the main logic of the delay queue, checking waitingForAddCh for content to be delayed, taking out the delayed content and placing it in Heap; and ensuring the maximum blocking period.

The rate-limiting queue RateLimiting is a queue in which the priority queue is an extension of the delay queue.

You can see that the abstraction of a limited queue corresponds to a delayed queue as long as it satisfies AddRateLimited() , Forget() , NumRequeues() are all limited queues. After looking at and understanding the rules, the specific implementation needs to be analyzed.

rateLimitingType is an implementation of the abstract specification RateLimitingInterface, which can be seen by adding a rate limiter RateLimiter to the delay queue.

The ItemBucketRateLimiter is an implementation that stores each token bucket as a list, with each key being a separate limiter.

ItemFastSlowRateLimiter, the limiter retries a certain number of times quickly and then slowly.

How to use Kubernetes’ rate-limiter

Containers for rate-limited queues based on traffic control that can be bursted in large numbers but needs to be shaped and the add operation will be added based on the time to wait as designed in When(). Different ways of delay are implemented depending on the queue.

Because the default speed limiter does not support initialized QPS, modify the one within the source code to $BT(1, 5)$, and the execution result can be seen that when the number of tokens in the bucket is exceeded during large bursts of traffic, it will be released based on the speed of token generation. 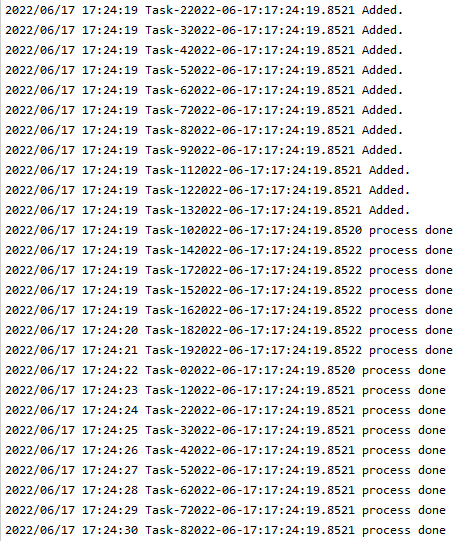